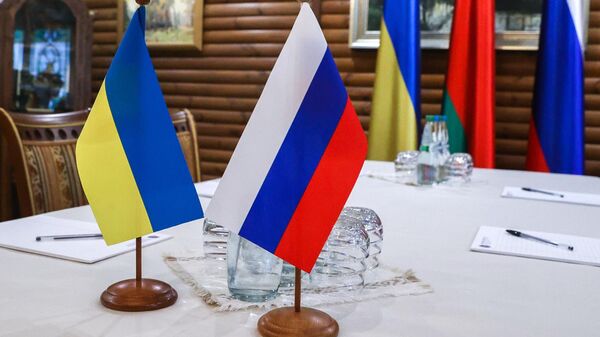 Subscribe
International
India
Africa
According to data from the Russian Ministry of Defense, since the beginning of the special operation in Ukraine, Russian forces have destroyed 260 Ukrainian warplanes, 144 helicopters, 1,600 drones,763 rocket launchers, 4,146 tanks and other armored vehicles, and 3,185 artillery pieces.
Earlier this month, Russian forces and Donbass militias liberated the territory of the Lugansk People's Republic from Kiev's troops, seizing the city of Lisichansk.
On February 24, Russia launched a special military operation in Ukraine following requests from the then newly-recognized Donetsk and Lugansk republics, which have been suffering from an eight-year-long war, waged by Kiev.
Follow Sputnik's live feed and Telegram channels to get the latest updates:
Sputnik News US — https://t.me/sputniknewsus
Sputnik News India — https://t.me/sputniknewsindia
Table of contents
New firstOld first
02:36 GMT 25.07.2022

North Korea Accuses US of ‘Biological Terrorism’ - Reports
00:22 GMT 25.07.2022
Ukrainian Troops’ Attempted Counterattack on Kherson Region Fails - Local Authorities
SIMFEROPOL (Sputnik) - Ukrainian troops have made another unsuccessful attempt to break through the defense line in the Kherson Region, Kirill Stremousov, the deputy head of the regional military-civil administration, told Sputnik.
"...the Ukrainian nazis made another failed attempt to attack the Kherson region. Their attempt to attack failed," Stremousov said, adding that such "attempts only lead to heavy losses in the ranks of the Ukrainian army."
According to Stremousov, Kiev is deliberately escalating the situation around Kherson in order to ask the West for more weapon deliveries.
"There has not been a single successful breakthrough or counteroffensive by the Ukrainian troops since the beginning of the special operation," Stremousov told Sputnik.
Earlier this month, Stremousov told Sputnik that the Kherson Region was beefing up its air defense system amid intensifying missile attacks from the Ukrainian army.
The shelling of residential districts in Kherson by Ukrainian troops has become more frequent in recent weeks. Earlier in July, the city of Nova Kakhovka was targeted by Ukrainian forces using the US-supplied multiple rocket launcher HIMARS. As a result, a hospital and residential buildings were damaged and several deaths were reported.
The Kherson Region and most of Zaporizhzhia Region of Ukraine are now controlled by Russia's military as a result of the special operation that began on February 24, after the Donetsk and Luhansk people's republics requested help from Russia amid intensifying attacks by Ukrainian troops. Local military-civil administrations have already been formed in the two regions, which have announced plans to hold referendums for accession to Russia.
A Russian security source told Sputnik this month that there are two HIMARS supplied to Ukraine by the United States currently deployed near the Kherson Region, while the rest are deployed in the Donbas area. The source said that, according to information received from the Ukrainian military, out-of-staff NATO personnel are in charge of the use of HIMARS systems in Ukraine.
22:45 GMT 24.07.2022

Canadian Citizen Killed in Donbass, Foreign Ministry Spokesperson Says
21:53 GMT 24.07.2022
Four Civilians Killed in LPR City During Ukrainian Forces’ Shelling - LPR Mission to JCCC
LUHANSK (Sputnik) - Four civilians were killed during the shelling of the city of Rubizhne in the Luhansk region by Ukrainian troops, the Luhansk People’s Republic’s (LPR) mission to the Joint Center for Control and Coordination on the ceasefire regime (JCCC) said.
"Shelling was recorded from the side of the armed formations of Ukraine: 17:00 [14:00 GMT on Sunday] at the city of Rubezhnoye, with the use of 155-mm artillery," the LPR mission said in a statement on Telegram, adding that "four civilians died as a result of the shelling."
On Saturday, the city of Krasnyi Luch in the Luhansk region was shelled using the US-supplied HIMARS (High Mobility Artillery Rocket System), according to LPR.
Russian Foreign Ministry spokeswoman Maria Zakharova said earlier this month that the United States had provided intelligence to Ukraine for shelling Donbas cities using HIMARS missiles. According to Zakharova, with the supply of such heavy arms, the artillery attacks of Ukraine's armed forces have become more active and it appears that Ukrainian troops have received an order from Kiev to use such systems against civilians without hesitation.
19:43 GMT 24.07.2022

Russia
Social Benefits, Pensions Start Being Paid in Kharkov Region
18:33 GMT 24.07.2022
Social Benefits, Pensions Start Being Paid in Kharkov Region, Russian Official Says
Pensions, social benefits and salaries to budget-sector employees have started being paid in the Kharkov Region, Russian Deputy Prime Minister Marat Khusnullin said on Sunday.
"We have carefully listened to the guidance of the Kharkov Region on the payment of social benefits, pensions. There is now also a difficult situation there, but we have already started making payments — pensioners, budget-sector employees have already begun to receive salaries and social benefits," Khusnullin said in a video posted on Telegram after a meeting of the regional headquarters the day before.
17:22 GMT 24.07.2022
Lavrov: Russia Ready to Resume Full-Scale Talks With Ukraine, But Kiev Unwilling
Moscow is ready to resume full-scale talks with Kiev and the ball is in Ukraine's court, but so far its leadership has clearly shown its unwillingness to launch the process, Russian Foreign Minister Sergey Lavrov said on Sunday.
"We do not have any preconceptions about resuming negotiations [with Kiev] on a broader range of issues, but it is not up to us. Because the Ukrainian authorities, starting with the president and ending with his countless advisers, have consistently stated that there will be no negotiations until Ukraine defeats Russia," Lavrov said following talks with Egyptian Foreign Minister Sameh Shoukry.
16:56 GMT 24.07.2022
Kiev Says 8 Months Needed to Export All Ukrainian Grain Under Istanbul Deal
Oleg Ustenko, economic adviser to Ukrainian President Volodymyr Zelenskyy, said on Sunday that it will take about 8-9 months to export all Ukrainian grain as part of the Istanbul deal.
"If now the ports were unblocked... then we could transport 60 million tons of grain within 8-9 months," Ustenko said, adding that Ukraine currently has 20 million tons of grain for export and another 40 million tons expected from the new harvest worth more than $10 billion.
If the seaports remain blocked, it will take up to two years to export this amount of grain, Ustenko added.
16:56 GMT 24.07.2022

Istanbul Grain Deal
Lavrov Says Russia, Turkey, Yet Undetermined Party Will Escort Ships With Ukrainian Grain
14:18 GMT 24.07.2022
Russia to Draft Rebuilding Plan for Severodonetsk Urban Area, Senior Official Says
Russian Deputy Prime Minister Marat Khusnullin on Sunday announced the plans to draft a rebuilding plan for Severodonetsk metropolitan area similarly to Mariupol as both cities suffered from the hostilities.
"We have started the work on the rebuilding of Severodonetsk urban agglomeration including Severodonetsk, Lisschansk, Popasnaya, Rubezhnoye," Khusnullin said on Telegram.
A working group led by Russian Construction and Housing Minister Irek Faizullin delivered a big shipment of building materials last week, the official noted.
He added that the reconstruction scheme will include a detailed plan with established time frames similar to that for Mariupol.
12:03 GMT 24.07.2022
Lavrov: Moscow Not Asking to Lift Sanctions, But West Must Resolve Self-Created Food Supply Issues

Russia's Special Operation in Ukraine
Lavrov: Moscow Not Asking to Lift Sanctions, But West Must Resolve Self-Created Food Supply Issues
10:25 GMT 24.07.2022
Zaporizhye Region Wants to Host Russian Military Bases on Permanent Basis
The permanent deployment of Russian troops in the Zaporizhzhia region would guarantee the region's security against attempts of external aggression, Vladimir Rogov, a member of the main council of the military-civil administration of the region, told Sputnik.

"We want our region to have [Russian] military bases on a permanent basis," Rogov said.

He told Sputnik that a detailed discussion on the issue could be held after a referendum on joining Russia is held in Zaporizhzhia.

"The permanent deployment of the Armed Forces of the Russian Federation in the Zaporizhzhia region would guarantee the region's security from attempts of external aggression and terror by Ukrainian nationalists," Rogov said.

Earlier this month, Rogov told Sputnik that Ukrainian troops had made an unsuccessful attempt to carry out an offensive in the Zaporizhzhia Region, but met a tough rebuff, and were forced to flee.
09:46 GMT 24.07.2022
Russia Destroys Ukrainian Warship, Warehouse With US Harpoon Missiles in Odessa Port – MoD

"US House Armed Services Committee Chairman Adam Smith in a media interview mentioned the quantity of HIMARS and MLRS, which the US and allies will send to Ukraine. We are talking about 25-30 pieces of equipment and a big amount of munitions", head of the Ukrainian presidential office Andrei Yermak said on Telegram.

Zakharova noted that a Ukrainian military vessel was targeted, despite President Zelensky's claims that the missile hit the port of Odessa. The statement came after Moscow and Kiev signed a deal, brokered by Turkey and the UN, aiming to resume grain deliveries via the Black Sea.
07:27 GMT 24.07.2022
Ukrainian Troops Shell City in LPR Using HIMARS, Authorities Say
Six US-supplied HIMARS (High Mobility Artillery Rocket System) missiles were used by Ukrainian troops to shell the city of Krasnyi Luch in the Lugansk region in the early hours of Sunday, the Lugansk People’s Republic’s (LPR) mission to the Joint Center for Control and Coordination on the ceasefire regime (JCCC) said.

"Shelling was recorded from the side of the armed formations of Ukraine: 01:45 [22:45 GMT on Saturday] at the city of Krasnyi Luch, with the use of MLRS [Multiple Launch Rocket System] HIMARS (six missiles)," the LPR mission said in a statement on Telegram.

A Russian security source told Sputnik on Thursday that there are two HIMARS, supplied to Ukraine by the United States, currently deployed near the Kherson Region, while the rest are deployed in the Donbas area. The source said that, according to information received from the Ukrainian military, out-of-staff NATO personnel are in charge of the use of HIMARS systems in Ukraine.
The Pentagon has pledged to provide Kiev with more than 20 HIMARS, 12 of which have already been transferred. According to a government procurement website, the US military is considering acquiring up to 480 HIMARS systems.
07:20 GMT 24.07.2022
Adds Bahamas, Isle of Man and Guernsey to 'Unfriendly Countries' List

The Bahamas, which imposed a ban on transactions with the Bank of Russia, the country's financial ministry and a number of credit institutions, was also included in the list, it added.
Newsfeed
0
Access to the chat has been blocked for violating the rules . You will be able to participate again through:∞. If you do not agree with the blocking, please use the feedback form
The discussion is closed. You can participate in the discussion within 24 hours after the publication of the article.
To participate in the discussion
log in or register
loader
Chats
Заголовок открываемого материала