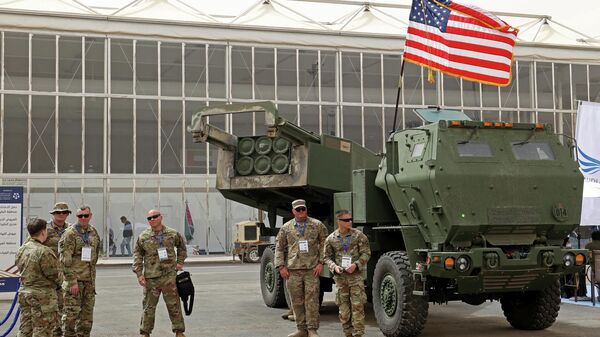 Since the beginning of the special operation in Ukraine, Russian forces have eliminated 211 Ukrainian warplanes, 132 helicopters, 1,308 drones, 2,081 artillery pieces and 3,773 tanks and other armored vehicles.
Russian and Donbass troops are advancing amid the special operation, liberating multiple cities in the DPR and LPR from Kiev's forces over the past weeks. However, the Ukrainian military is are still targeting Donetsk and other Donbass cities, which are suffering from the most intensive bombardment since 2015.
Follow Sputnik's live feed and Telegram channels to get the latest updates:
Sputnik News US — https://t.me/sputniknewsus
Sputnik News India — https://t.me/sputniknewsindia
New firstOld first
23:52 GMT 23.06.2022

"The United States announced another additional $450 million worth of security assistance to Ukraine as part of our commitment to help Ukraine defend its democracy in the face of unprovoked Russian aggression," Kirby told a briefing.
"This package contains weapons and equipment, including new High Mobility Artillery Rocket Systems, tens of thousands of additional rounds of ammunition for the artillery systems that have already been provided ... and patrol boats to help Ukraine defend its coast and its waterways."
An exact breakdown provided by the US department of Defense notes the new aid package with include: four HIMAR systems; 36,000 rounds of 105 mm ammunition; 18 tactical vehicles to tow 155mm artillery; 1,200 grenade launchers; 2,000 machines guns; 18 coastal and riverine patrol boats; and a variety of spare parts and equipment.
18:28 GMT 23.06.2022
EU Council Chief Confirms Approval by EU Summit of Candidate Status for Ukraine, Moldova

EU Council Chief Confirms Summit Approval of Ukraine, Moldova Accession Bid
15:09 GMT 23.06.2022
US to Announce $500Mln in Additional Military Aid for Ukraine, Including HIMARS - Reports
The Biden administration will announce $500 million in additional military assistance for Ukraine later on Thursday, CNN reported, citing an official knowledgeable about the matter.
The additional military assistance package will include more High Mobility Artillery Rocket Systems (HIMARS) and artillery munitions, the report said.
14:51 GMT 23.06.2022
US Not Expecting HIMARS, Other Weapons to Change Right Away Situation in Ukraine - Reports
The United States does not expect the military equipment it has sent to Ukraine, including the High Mobility Artillery Rocket System (HIMARS), to immediately change the situation in Ukraine, CNN reported on Thursday, citing two US officials with direct knowledge of US intelligence assessments.
According to the sources, the Russian military has already destroyed some of the new weapons supplied by the West, including the M777 howitzers.
Last week, US President Joe Biden said he had notified Ukraine’s Volodymyr Zelensky that Washington will provide Kiev with an additional security aid package in the amount of $1 billion.
The new package includes guided multiple launch rocket system munitions, 18 howitzers, 36,000 rounds of artillery ammunition and two additional Harpoon anti-ship missile systems, according to the Defense Department.
The package also includes $650 million from the Ukraine security assistance initiative funds, including two additional Harpoon coastal defense systems and thousands of secure radio and night vision devices and thermal weapon sites, the Defense Department added.
Last Wednesday, the Biden administration announced a military aid package for Ukraine that would include 1,000 anti-tank Javelin missiles, 50 command launch units and four Mi-17 helicopters as well as four HIMARS.
14:08 GMT 23.06.2022
EU Council to Unanimously Confirm Candidate Status for Ukraine, Moldova, Greek PM Says
The EU Council will unanimously support granting the European Union candidate status to Ukraine and Moldova during the upcoming summit, Greek Prime Minister Kyriakos Mitsotakis said on Thursday.
"Today’s Council has a special meaning as we are going to unanimously confirm the EU candidacy status for Ukraine and Moldova. It is a very important political decision that the EU is taking as a response to the unjustified invasion of Russia to Ukraine," Mitsotakis said before the summit.
Meanwhile, Belgian Prime Minister Alexander De Croo said that giving the candidate status to Ukraine is a "symbolic" gesture, adding that EU accession will require a lot of time and reforms.
13:10 GMT 23.06.2022
LPR Forces Seize Control Over Zolotoe Settlement, Authorities Say
13:07 GMT 23.06.2022
France Says Russia Expelling Embassy Employee, Paris Regrets This Decision
The Russian authorities have informed the French ambassador in Moscow of their decision to expel one employee of the embassy, the French Foreign Ministry said on Thursday, adding that Paris regrets this move.
"The Russian authorities informed our ambassador in Moscow last Friday that the presence of one of the embassy employees on their territory is undesirable. Legal grounds were not provided. We regret this unjustified decision," the ministry’s spokesperson told a press conference.
France Info has reported that Moscow is expelling Fabrice Rousseau, the cultural adviser at the embassy.
11:23 GMT 23.06.2022
Kremlin Says Yet to Get Acquainted With Ukrainian Settlement Plan Published in US Media
Moscow has not yet got acquainted with the plan for settling the Ukrainian conflict published in the US media, Kremlin spokesman Dmitry Peskov said on Thursday.
US magazine The National Interest published earlier in June a fifteen-point peace plan to end the conflict in Ukraine, noting that such an agreement can be mediated by France, Germany, Italy, Turkey, and Israel. According to the outlet, these are "the best and most realistic terms Ukraine can hope for." Among other things, it stipulates that Kiev should recognize Russia's 2014 reunification with Crimea.
"No, we did not have the opportunity to get acquainted. As for the peace plan, yes, it is possible after Ukraine fulfills all the requirements of the Russian side," Peskov told reporters.
11:22 GMT 23.06.2022

'Gas Is Scarce Commodity': Berlin Activates 2nd of Three Stages in Emergency Plan Amid Energy Crisis
11:22 GMT 23.06.2022
UK Foreign Secretary Calls for Concrete Action on Ukrainian Grain Ahead of New Harvest
UK Foreign Secretary Liz Truss on Thursday reiterated the need for concrete action to resolve the issue of Ukrainian grain exports ahead of the new harvest.
Earlier this month, Turkish Defense Minister Hulusi Akar said that there was some progress in the issue of grain exports from the Black Sea ports. However, some technical problems remain, which require discussion with Russia, Ukraine and the United Nations, he noted.
"The UK, Turkey are working closely together. In particular we are working to get the grain out of Ukraine … It is urgent that action is taken within the next month ahead of the new harvest," Truss said during a joint press conference with Turkish Foreign Minister Mevlut Cavusoglu in Ankara.
In the absence of a solution to this issue, a global food crisis is expected, according to Truss.
The EU and its allies have blamed the blocking of Ukrainian grain shipments on Russia, but Moscow said that cargo ships are unable to leave Black Sea ports due to mines planted by Ukraine's military, calling on Kiev to clear the waters. The UN has repeatedly warned that the broken supply chain threatens food insecurity on a global scale.
11:21 GMT 23.06.2022
Kremlin Says No Discussion on Removing Border Between Russia, Zaporozhye region
There is currently no discussion about removing the border between Russia and Ukraine’s Zaporozhye region, part of which is controlled by Russian troops, Kremlin spokesman Dmitry Peskov said on Thursday.
Vladimir Rogov, a member of the main council of the military-civilian administration of the Zaporozhye region, said that there should be no state border between Russia and the "liberated territories" of southern Ukraine.
"Apparently, this is not a completely correct statement on this issue ... There is no discussion about this," Peskov told reporters.
11:20 GMT 23.06.2022
Iran Hopes for Diplomatic Solution to Ukraine Conflict
Iran hopes for a diplomatic solution to the conflict in Ukraine, Iranian Foreign Minister Hossein Amirabdollahian said on Thursday.
"We hope that the parties will return to solving this issue in a peaceful and diplomatic way as soon as possible," Amirabdollahian said at a press conference following talks with Russian Foreign Minister Sergey Lavrov.
At the same time, he noted that NATO is expanding its presence in the region. Iran considers "double standards unacceptable" and has always supported "a peaceful, diplomatic solution to this problem," the Iranian foreign minister added.
Lavrov has been on a working visit to Iran from June 22-23. Apart from Amirabdollahian, the Russian foreign minister held talks with Iranian President Ebrahim Raisi.
10:08 GMT 23.06.2022
Peaceful Settlement in Ukraine Possible Only After Kiev Complies With Russia's Conditions, Kremlin Says
10:06 GMT 23.06.2022
European Parliament Adopts Resolution, Supporting EU Candidacy for Ukraine and Moldova
09:32 GMT 23.06.2022
Russian Grants Ships From Ukraine Ports Secure Passage to Bosporus Strait
09:19 GMT 23.06.2022
UK Slaps More Sanctions on Russia, Bans Exports Linked to Chemical & Biological Weapons
08:20 GMT 23.06.2022
Germany Fears Russia May Cut Off Gas Supply During Nord Stream Maintenance Works - Reports
The German government is deeply concerned about a possible Russian gas supply cut off to the country, Financial Times reported on Thursday, citing German officials.

"The supply situation is tight enough without NS1 [Nord Stream 1] being shut down," one of the German officials told the news outlet.

According to the report, officials fear that Russian energy giant Gazprom may completely cut off gas supplies while Nord Stream is closed for repairs, which will undermine the country’s efforts to fill gas storage facilities by winter.

"Already they have cut flows through NS1 by 60 per cent and not made up for it with increased flows through other pipelines," Carsten Rolle, the head of Energy and Climate Policy Department of the Federation of German Industries, said.

He added that during previous Nord Stream maintenance works, Gazprom made up the shortfall by sending gas to Germany through Ukraine or Poland.

"There is a concern that they will not do that this year," he said.

At the moment, German gas storage facilities are 58% full, the government wants them to be 90% full by November 1. However, due to problems with Nord Stream, gas importers are forced to purchase the shortfalls on the spot market at higher prices.
According to the spokesperson of the German Ministry for Economic Affairs and Climate Action, the government is in "close contact with gas traders who are preparing for this date," citing July 11 as the start of maintenance works.
06:21 GMT 23.06.2022
Ukrainian Forces Target DPR More Than 40 Times Over Past Day
05:04 GMT 23.06.2022
12 Foreign Vehicles Blocked in Kherson Port Due to Ukrainian Military Mining Black Sea
Newsfeed
0
Access to the chat has been blocked for violating the rules . You will be able to participate again through:∞. If you do not agree with the blocking, please use the feedback form
The discussion is closed. You can participate in the discussion within 24 hours after the publication of the article.
To participate in the discussion
log in or register
loader
Chats
Заголовок открываемого материала