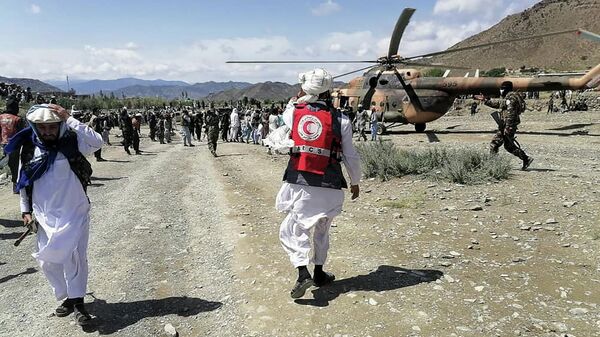 Evgeny Mikhaylov
All materialsWrite to the author
The tremors hit Paktika and Khost provices near the border with Pakistan. The epicentre was located about 44km (27 miles) from the south-eastern city of Khost, according to the USGS.
A powerful 6.1-magnitude earthquake hit Afghanistan on Wednesday, killing at least 300 people in the country's east, NBC News reported, citing Bilal Karimi, a spokesman for the Taliban*. Initial assessments, reported by state-run media earlier in the day suggested that 155 people were dead, while many more were wounded.

"According to preliminary information ... 100 people have been killed in Paktika, Gayan district, and in Afghan Dubai village, in Spera district of Khost province, 20 people have been exhumed," Elias Khel Naseri, the head of the Southwest Red Crescent zone told Sputnik

Government spokesman Bilal Karimi tweeted a confirmation that hundreds were killed and injured, calling on aid agencies to send teams to the area immediately.
Several photos and videos, purportedly depicting the aftermath of the quake are circulating online, showing destroyed houses and wounded people.

1/2 #BREAKING: The number of martyrs in Barmal, Ziruk, Naka and Gyan districts of #Paktika province has risen to 255 and the number of martyrs has reached 155.
Disadvantaged humanitarian organizations in the province should provide emergency assistance to the region pic.twitter.com/Qcj4BVkpCx

Last night’s earthquake has caused severe losses in Paktika province. Afghan Air-force is leading the rescue efforts. According to unofficial figures from local sources more than 255 people have lost their lives and around 155 are injured. pic.twitter.com/6knXaSlHSD

Unconfirmed news & photos of casualties & destruction are coming from the different parts of the south east of #Afghanistan after the last night’s #earthquake. It is said that dozens are died in Geyan, Spere & some other districts of Paktika & Khost. More details to come. pic.twitter.com/opHE7ZTXnZ

*The Taliban is under UN sanctions for terrorist activities
New firstOld first
18:00 GMT 22.06.2022
Afghanistan Earthquake Death Toll Reportedly Reaches 1,100, More Than 1,650 Injured
17:48 GMT 22.06.2022
WHO Sends Nearly 10 Tonnes of Medical Supplies to Afghan Regions Hit by Earthquake
The World Health Organization (WHO) sent nearly 10 tonnes of medical supplies to the areas of Afghanistan hit by a devastating earthquake that rocked the country on Wednesday, the WHO country office in Afghanistan said.
"A shipment of 9.8 tonnes and 95 cubic meters of medical supplies are on the way to the #earthquake affected areas of #Afghanistan. These include 30 #emergency health kits, 50 surgical kits & other meds to treat the wounded at hospitals," the organization said on Twitter.
WHO medical teams are supporting local health workers in treating patients injured in the earthquake, the country office noted.
Earlier in the day, WHO chief Tedros Adhanom Ghebreyesus assured that the organization will "continue supporting people in need across the country."
Other humanitarian institutions pledged to support Afghanistan as well, with UN International Children's Emergency Fund (UNICEF) dispatching several mobile health and nutrition teams to the affected regions to provide first aid.
According to the US Geological Survey, a magnitude 6.1 earthquake hit Afghanistan. The latest data provided by Paktika province suggests that over 1,000 people were killed and over 1,500 others were injured in the country as a result of the earthquake. The Taliban (under UN sanctions over terrorist activities) leader Hibatullah Akhundzada called on the international society and humanitarian organizations to assist Afghanistan in dealing with the aftermath of the earthquake.
Multiple countries around the world expressed their willingness to lend a helping hand to the population, including Russia, while the United Kingdom, Iran and India indicated that they were ready to provide the necessary aid to Afghanistan as soon as possible.
16:33 GMT 22.06.2022
Biden Directed USAID, Other Federal Gov't Parnters to Assess Reponse Options to Help Those Most Affected by Earthquake in Afghanistan
15:53 GMT 22.06.2022
Guterres Extends Condolences to People of Afghanistan After Deadly Earthquake
"My heart goes out to the people of Afghanistan who are already reeling from the impact of years of conflict, economic hardship and hunger. I convey my deep condolences to the families of the victims and wish speedy recovery to the injured," ГN Secretary General Antonio Guterres said.

He noted that the UN in Afghanistan is fully mobilized.

"Our teams are already on the ground assessing the needs and providing initial support. We count on the international community to help support the hundreds of families hit by this latest disaster. Now is the time for solidarity," the UN chief added.
15:15 GMT 22.06.2022
UN Says Needs Additional $15Mln to Aid Afghans After Earthquake
The United Nations has conducted a preliminary assessment of the situation in Afghanistan after the latest earthquake there and is requesting an additional $15 million to provide immediate assistance, UN Humanitarian Coordinator for Afghanistan Ramiz Alakbarov said on Wednesday.
"The preliminary needs which were assessed today already request for additional $15 million, and I do not know how much we will ask for tomorrow," Alakbarov said during a press briefing.
Alakbarov pointed out that the situation in Afghanistan is made more challenging because of bad weather conditions.
"[W]e had snow yesterday in some parts of Afghanistan. There was a drop in temperature and rain has been going now since yesterday," he said.
The United Nations does not own the heavy machinery needed to get the people out of the rubble and will be reliant on the Afghan authorities, Alakbarov said, adding that the Afghan government has not request additional equipment to help people.
14:04 GMT 22.06.2022
UN's Staff, Facilities in Afghanistan Unaffected by Deadly Earthquake - Coordinator
UN staff and facilities in Afghanistan have not been affected by the deadly earthquake that struck the country on Wednesday, UN Humanitarian Coordinator in Afghanistan Ramiz Alakbarov told Sputnik.
The latest data provided by the Paktika province suggests that more than 1,000 people were killed and over 1,500 others were injured in the magnitude 6.1 earthquake.

"Our buildings and employees have not been affected," he said.

In the morning, UN teams went to the scene, including non-governmental organizations. According to Alakbarov, UN employees are already at the scene.

"In Paktika alone, there are 14 mobile teams that are providing medical care."

At least 9.8 tonnes of medicines and medical supplies have been allocated and distributed by the UN, the official said, adding that emergency medical kits have been delivered to nearby hospitals.
NGO partners have sent eight ambulances there. The number of those dead is being specified, now the rubble is being cleared, he added.
11:50 GMT 22.06.2022
Afghans Being Evacuated From Paktika Province by Helicopters After Powerful Earthquake
Afghan residents of Gayan district in Paktika province, including badly injured people, are being evacuated by helicopters, according to a video footage obtained by Sputnik.
The United Nations is considering how to assist Kabul in mitigating the earthquake's consequences, UN Deputy Special Representative and Resident and Humanitarian Coordinator in Afghanistan Ramiz Alakbarov said on Wednesday.

"@OCHAAfg and @unafghanistan are assessing the needs and responding in the aftermath of the earthquake last night which has taken hundreds of lives. Our condolences to the families of deceased, response is on it's way," Alakbarov tweeted.

Kabul has been in contact with Russia via diplomatic channels on possible assistance, Abdul Qahar Balkhi, spokesman of the foreign ministry of the Taliban (under UN sanctions for terrorism), said.

"We are in contact with the Russian Federation through official diplomatic channels, and appreciate offer of assistance by all countries and agencies," he said.

“The death toll is likely to rise as some of the villages are in remote areas in the mountains and it will take some time to collect details,” Interior Ministry official Salahuddin Ayubi said. He noted that helicopters had been deployed in a rescue operation to reach people living further from the cities and bring them medical supplies.

Visuals of Earthquake Devastation in Afghanistan Take Internet by Storm, Rescue Mission is Underway
09:08 GMT 22.06.2022
Taliban Call on International Community to Assist Afghanistan After Earthquake
Taliban leader Hibatullah Akhundzada called on the international society and humanitarian organizations to assist Afghanistan after it was hit by a powerful earthquake on Wednesday.

"We also call on the international community, charitable and humanitarian organizations to help the people of Afghanistan in connection with this tragedy and make every effort to help the mourners as much as possible," the Taliban leader said in a statement, as published by the movement’s spokesman, Bilal Karimi, on Twitter.