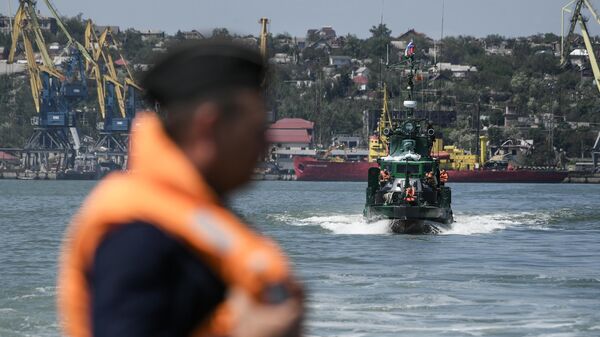 Russia launched the special operation in Ukraine back in February, after the breakaway republics of Donetsk and Lugansk (DPR and LPR) appealed for help in defending themselves against Ukrainian forces.
Russian armed forces and Donbass troops continue to advance amid the special operation, liberating settlements in the Donbass region.
The Russian military, during a special operation to demilitarize Ukraine, took control of the Kherson Region in the south of the country and part of the Zaporozhye Region. Military-civilian administrations have been formed in the regions.
However, Kiev's forces continue to shell settlements in the DPR and LPR, resulting in multiple civilian casualties.
Follow Sputnik's live feed and Telegram channels to get the latest updates:
Sputnik News US — https://t.me/sputniknewsus
Sputnik News India — https://t.me/sputniknewsindia
New firstOld first
02:52 GMT 22.06.2022

US Has Not Contacted Russian Embassy Regarding Captured Americans in Ukraine - Antonov
01:27 GMT 22.06.2022
Over 2 Million People Evacuated From Ukraine, Donbas to Russia - Defense Ministry
More than 2 million people have been evacuated to Russia from dangerous areas of the Donetsk and Lugansk People's Republics (DPR and LPR) and Ukraine since the start of Moscow's special military operation, head of the Russian National Defense Control Center, Col. Gen. Mikhail Mizintsev, who also leads Russia's humanitarian response coordination headquarters, said.

"Over the past day, without participation of the Ukrainian side, 21,947 people, including 3,826 children, were evacuated to the territory of the Russian Federation from dangerous areas of Ukraine and the Donbass republics; overall, since the start of the special military operation, 2,002,773 people, including 318,144 children, [have been evacuated]," Col. Gen. Mizintsev said at a briefing.
23:40 GMT 21.06.2022
Russia Has Supplied Nearly 35,000 Tonnes of Humanitarian Aid to Ukraine - Defense Ministry
Since March 2, Russia has delivered nearly 35,000 tonnes of humanitarian cargoes to Ukraine, head of the Russian National Defense Control Center, Col. Gen. Mikhail Mizintsev, who also leads Russia's humanitarian response coordination headquarters, said.

"Starting from March 2, 2022, the Russian Federation has already delivered 34,618.7 tonnes of essentials, food, medicines and medical supplies to Ukraine," Col. Gen. Mizintsev said at a briefing.
18:50 GMT 21.06.2022
State Dept: US is in Direct Contact With Russia About Americans Detained in Ukraine
18:49 GMT 21.06.2022
UN Says $2.25Bln Flash Appeal for Ukraine 70% Funded
The international community has increased its contributions to the UN humanitarian appeal for Ukraine, with $1.58 billion or 70% of the required amount raised, UN spokesman Stephane Dujarric said Tuesday.

"The international community has now stepped up and generously provided 70% of funding to our humanitarian appeal for Ukraine, which stands at $2.25 billion," Dujarric told a briefing.

The Ukraine Flash Appeal covers the time frame from March 1-August 31. The requirements will be reviewed for the period beyond August. The flash appeal is supposed to provide life-saving assistance to displaced and non-displaced persons, protect people and civilian infrastructure, and support essential services in areas where hostilities are ongoing.
18:47 GMT 21.06.2022
White House: Biden Working With Partners to Find Overland Ways to Get Grain From Ukraine
US President Joe Biden is working with allies and partners around the world to find overland routes of exporting grain from Ukraine amid Russia’s special military operation, National Security Council Coordinator for Strategic Communications John Kirby said on Tuesday.

"The president is working with leaders around the world to see if there are other overland ways we can do that and he's exploring a range of options," Kirby said during a press briefing.

Kirby added that there are many US partners in Europe who want to see the problem of grain exports from Ukraine to be resolved.

On June 14, Biden said that he has a plan to build temporary silos on Ukraine's borders to export grain.

World leaders and international organizations have been raising concerns over an imminent and large-scale food crisis since the beginning of the conflict in Ukraine, citing disruptions in supply chains and derailed crops production as well as calling for unblocking of Ukraine's seaports and releasing the grain stuck in warehouses.

Russia has denied having blocked seaports and has drawn attention to the fact that Ukraine heavily mined the Black Sea. In addition, Russia has said that it has secured not one but two sea corridors for grain and other exports.
18:46 GMT 21.06.2022

"The oil refining industry in Ukraine does not work because of the attacks of the aggressor," Vitrenko said at a press conference, answering a question about the fuel supply level in the country.

On February 24, Russia began a military operation in Ukraine responding to calls for help from the breakaway republics of Donetsk and Lugansk. The Russian Ministry of Defense said the operation is targeting Ukrainian military infrastructure only and the civilian population is not in danger.
16:05 GMT 21.06.2022
UK Appeals to Russia on UK Mercenaries, Sentenced to Death in DPR, Russian Ambassador Says
London appealed to Moscow on the topic of the UK citizens, sentenced to death in the Donetsk People's Republic (DPR), sent an "arrogant" note, Russian Ambassador to London Andrey Kelin said on Tuesday.

"I can say that there was an appeal from the Britons to us, they sent a note, but a note drawn up in exceptionally arrogant, instructive terms. It does not make us want to cooperate on these issues," the ambassador said on the air of the Rossiya 24 broadcaster.

On June 9, two British citizens and one Moroccan citizen, captured in Mariupol, were sentenced to death in Donetsk. All three pleaded guilty to Ukraine's armed aggression aimed at seizing power in the DPR.
15:12 GMT 21.06.2022

The cargo ship is heading to Novorossiysk, accompanied by Russian warships.

During the battles for Mariupol, the ship was damaged, but the shipowner managed to restore all systems, recruit a crew and leave the port. Before leaving, the owner company paid off the port services in full.
13:42 GMT 21.06.2022
Lithuanian Opposition Airs Questions for Gov't About Transit Ban to Russia's Kaliningrad
The Lithuanian opposition has questions to the government regarding its decision to ban transit of certain goods to the Russian exclave of Kaliningrad through its territory, Saulius Skvernelis, a democrat Lithuanian legislator and formerly the country's prime minister, said on Tuesday.
"We have a lot of concerns and questions, as to whether this could be a national performance," Skvernelis said on air of Lithuanian National Radio and Television (LRT).

Questions on the agenda include "issues related to the EU sanctions, their application in connection with transit to the Kaliningrad region... and details related to the agreements with the EU and Russia, as well as bilateral Russia-Lithuania agreements, whether there are any exceptions, whether everything complies with the sanctions and the spirit of agreements," he said.
13:42 GMT 21.06.2022
EU Should Not Pressure Ukraine on Peace Deal With Russia - Estonian Minister
The European Union should not put pressure on Ukraine to sign a peace deal with Russia and should instead support Kiev by imposing further sanctions on Moscow, Estonian Foreign Minister Andres Sutt said on Tuesday.

"We should also be very clear that Ukraine should not be pushed or forced to any swift peace agreement with Russia because it has to be up to Ukraine - when and what terms of the agreement could eventually be made - and we need to be from European side be very firm on imposing further sanctions [on Russia]," Sutt said before the EU General Affairs Council.
13:42 GMT 21.06.2022
EU Countries Reach Full Consensus on Granting Ukraine Candidate Status, French Diplomat Says
13:14 GMT 21.06.2022
US Attorney General Making Unannounced Visit to Ukraine, Reports Say
US Attorney General Merrick Garland is making an unannounced visit to Ukraine, ABC News reported on Tuesday, citing a Justice Department official.

Garland is due to meet with Ukrainian Prosecutor General Iryna Venediktova to discuss efforts to help identify and prosecute individuals involved in war crimes in Ukraine, the report cited the official as saying.

Garland is visiting Ukraine to re-iterate Washington’s support for Kiev in what it claims to be "an unprovoked and unjust Russian invasion," the report said.

Last week, US President Joe Biden told reporters that it is not likely for him to visit Ukraine during his upcoming trip to Europe.

Biden will visit Germany and Spain from June 25-28 for the Group of Seven (G7 )and NATO summits. The NATO summit will take place in Madrid, Spain, on June 28.
12:52 GMT 21.06.2022
EU Commission Working on Legislative Proposal for $9.5Bln Aid to Ukraine - Spokeswoman
European Commission is still working out a draft legislative proposal for the $9.5 billion assistance package announced in May for Ukraine, spokeswoman Veerle Nuyts said on Tuesday.

At the end of May, European Council President Charles Michel said that EU leaders on the first day of the summit in Brussels expressed their readiness to additionally provide nine billion euros in assistance to Ukraine.

"We are still in the process of preparing a common draft legislative proposal for a decision on providing exceptional MFA to Ukraine and we can not be more specific on the precise timing of this proposal on this stage, " Nuyts told a briefing.

The German cabinet said the country's budget for 2022 has been increased by 2 billion euros ($2.1 billion) for the needs of defense, and these funds will "predominantly" go to support Ukraine.
11:16 GMT 21.06.2022
Russian Air Defense Thwarts Ukrainian Attack on Snake Island - MoD
Newsfeed
0
Access to the chat has been blocked for violating the rules . You will be able to participate again through:∞. If you do not agree with the blocking, please use the feedback form
The discussion is closed. You can participate in the discussion within 24 hours after the publication of the article.
To participate in the discussion
log in or register
loader
Chats
Заголовок открываемого материала