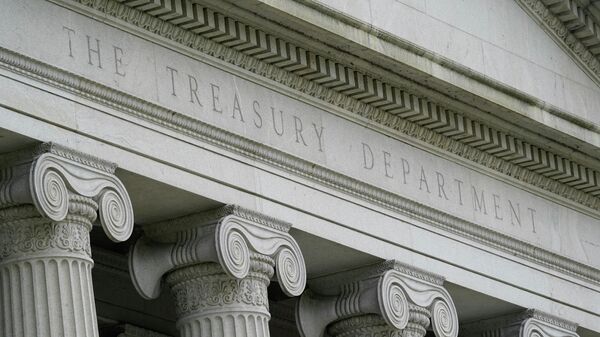 Russia launched its special military operation in Ukraine in February, after the Donetsk and Lugansk People’s Republics (DPR and LPR) appealed for help in defending themselves against Ukrainian provocations.
Russian armed forces and Donbass troops continue to advance amid the special operation, as they have liberated multiple towns in the region over the past weeks.
At the same time, Ukrainian forces are still targeting the Donbass cities with artillery fire.
Russian President Vladimir Putin said that Kiev's actions in the region amount to genocide and stressed that Ukraine should be demilitarised and de-Nazified.
Follow Sputnik's live feed and Telegram channels to get the latest updates:
Sputnik News US — https://t.me/sputniknewsus
Sputnik News India — https://t.me/sputniknewsindia
New firstOld first
23:09 GMT 19.06.2022
Russia Used New High-Precision ‘305’ Missiles in Ukraine - Source
Russia used new high-precision "305" missiles to destroy important military facilities in Ukraine, a source familiar with the matter tells Sputnik.

"As part of the special military operation in Ukraine, the Russian military aviation has started to use new light multi-purpose guided missiles ‘305’. The missiles are fired from Mi-28NM attack helicopters against important targets of the Ukrainian troops, such as warehouses with ammunition and fuel," the source said.

According to the source, the new Russian "305" missiles have a high accuracy in hitting targets with a deviation from the aiming line of no more than two meters (6.5 feet).
17:16 GMT 19.06.2022
Italy's Ruling Five Star Movement Split Over Arms Supplies to Ukraine

Italy's Ruling M5S Split Over Weapons Supplies to Ukraine
17:14 GMT 19.06.2022
Lavrov Expects US Attempts to Deprive Russia of Voice in International Affairs to Fail
Washington will not be able to deprive Moscow of a voice in international affairs or force it to comply with US-invented rules, Russian Foreign Minister Sergey Lavrov said on Sunday.

"They are seeking what they announced a long time ago, that Russia should know its place, Russia has no right to its own voice in international affairs, Russia must comply with the rules that the US has made up. I think, they understand perfectly well that they will not succeed," Lavrov told the Rossiya 1 broadcaster.

Relations between Russia and the US have deteriorated in recent months, with Washington and its allies waging a massive sanctions campaign against Moscow over its military operation in Ukraine.
15:43 GMT 19.06.2022

Situation in Ukraine
Ukraine Moves to Ban Russian Music, Literature
14:48 GMT 19.06.2022
'People are Scared to Queue for Water Because of Constant Shelling', Resident of Donetsk Says
13:41 GMT 19.06.2022
US Urges All Oil and Gas Producers, Including OPEC, to Increase Production, US Secretary of Energy Says
The United States is calling on all oil and gas producers, including the OPEC club of the largest oil exporters, to increase their output to rein in soaring gasoline prices, the US secretary of energy said on Sunday.

"[President Joe Biden] has asked for all suppliers around the globe to increase production. That includes OPEC, that includes our domestic oil and gas producers," Jennifer Granholm told CNN's State of the Union show.

Granholm said she understood that Biden would also meet one-on-one with Saudi crown prince Mohammed bin Salman, even though the Saudi royal family is accused of a role in the killing of journalist Jamal Khashoggi.

Granholm also said she would be meeting with chief executives of oil and gas companies in the coming week to discuss the lack of processing capacities at US oil refineries.
13:20 GMT 19.06.2022
US Inflation is 'Global Phenomenon' That Can't Be Taken Under Control 'Overnight', Treasury Says
US Treasury Secretary Janet Yellen admitted on Sunday that the national economy was expected to slow down because of "unacceptably high" inflation, but she argued that recession was not at all inevitable.

"I expect the economy to slow," she told ABC News' This Week show, "but I don't think a recession is at all inevitable."

"Clearly, inflation is unacceptably high," Yellen continued. "It's President [Joe] Biden's top priority to bring it down," she added.