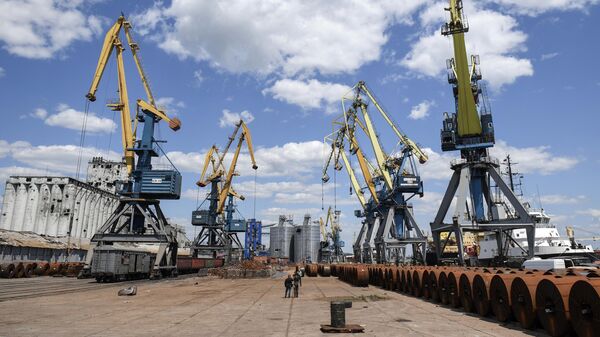 At the end of February, Russia launched a special military operation in Ukraine, after the Donetsk and Lugansk People’s Republics (DPR and LPR) appealed for help in defending themselves against shelling from Ukrainian forces.
Since the beginning of Russia's special operation in Ukraine, a total of 1.78 million civilians have been brought to safety in western Russia.

Furthermore, since early March, Russia has supplied Ukrainians with 29,323 tonnes of humanitarian aid, including essentials, food, medicines and medical goods. Approximately 360 tonnes of aid has been delivered in the past five days alone to people in the Donetsk People’s Republic, and the Kharkiv and Kherson regions.
Follow Sputnik's live feed and Telegram channels to get the latest updates:
Sputnik News US — https://t.me/sputniknewsus
Sputnik News India — https://t.me/sputniknewsindia
New firstOld first
23:30 GMT 12.06.2022

A total of 20 Grad rockets were launched at the Kirovskyi District in Donetsk, the DPR mission said on its Telegram channel shortly after midnight on Monday.
18:38 GMT 12.06.2022
Four Hurt in Bomb Blast Outside Melitopol Interior Ministry - Authorities
Four people were injured on Sunday in a bombing near the Interior Ministry's office in the city of Melitopol in Zaporizhzhia region, which local authorities labeled as a "terrorist attack" by Ukrainian militants.
"An explosive device was planted in a trash bin outside the city’s interior ministry office. The lives of employees and military personnel are not in danger," regional deputy interior chief Alexei Selivanov said on social media.
Initial reports said a young woman and a man had been hospitalized. Two more people were later admitted for treatment.
"New information shows that four people were injured in the terror attack in Melitopol. The young woman was hit the worst. She has lost a lot of blood," Selivanov told Sputnik.
18:37 GMT 12.06.2022
Terror Attack Hits Power Station in Berdyansk – Police
Parts of the southeastern city of Berdyansk in Zaporozhskaya oblast were plunged into darkness on Sunday after a suspected terror attack hit a power station, the regional deputy chief of interior affairs said.
"No one was, fortunately, injured or killed in the bombing of an electrical power station in Berdyansk," Alexei Selivanov told Sputnik.
This is the second bombing of a Russia-held city in a day after an explosive device went off outside a police station in the nearby city of Melitopol, leaving four passers-by hurt, one of them severely.
Selivanov accused militants loyal to the Ukrainian president of organizing what he described as acts of terrorism. He said the attacks were meant to target civilians.
17:02 GMT 12.06.2022

"It is possible that in the coming week we will hold phone talks with Mr. Putin," Erdogan said at a meeting with the youth in the city of Van.

He added that he intended to discuss the "grain issue" with Putin and with Volodymyr Zelensky..
15:37 GMT 12.06.2022
Two Hurt in Bomb Blast Outside Melitopol Interior Ministry, Authorities Say
Two people were injured on Sunday in a bombing near the Interior Ministry's office in the city of Melitopol in Zaporozhye region, which local authorities labelled as a "terrorist attack" by Ukrainian militants.

"An explosive device was planted in a trash bin outside the city’s interior ministry office. The lives of employees and military personnel are not in danger," regional deputy interior chief Alexei Selivanov said on social media.

A young woman and a man were injured, Selivanov added. They were hospitalised.
14:59 GMT 12.06.2022
Fighting Continues Between LPR Forces and Ukrainian Troops in Severodonetsk - Video
14:00 GMT 12.06.2022
DPR Head Says Sees No Prerequisites for Commuting Death Sentence of Foreign Mercenaries
There are no prerequisites for commuting the death sentences of three foreign mercenaries convicted in the Donetsk People's Republic, head of the DPR Denis Pushilin said on Sunday.

"In terms of possible exchanges, pardons and such. At the moment, even though I really have the opportunity and the right under our legislation to pardon these people, I see no prerequisites for me to move in this direction," Pushilin said.

On Thursday, a DPR court ruled that Moroccan citizen Saadoun Brahim and UK citizens Sean Pinner and Aiden Aslin would be executed by shooting. The verdict has already been condemned by the United Kingdom, the United States and the United Nations.

All three militants pleaded guilty to participating in hostilities on the side of Ukraine, while Aslin also pleaded guilty to taking training to commit acts of terrorism. The mercenaries have a month to appeal the decision in a higher court.
13:55 GMT 12.06.2022

"These reports of the Ukrainian media are spreading panic. The situation is under control. The bodies of those killed in the hostilities have been buried after forensic medical examination in accordance with procedures. There are not that many bodies still remaining under the rubble to worry about an epidemic," Pushilin told Russian and foreign journalists during a press tour organised by the Russian defence ministry.

The DPR head added that reburials in designated sites are underway with the help of forensic experts, employees of the prosecutor's office, and other specialists.

Pushilin also noted that Mariupol residents began returning to the city as the infrastructure is being rebuilt.

"People are coming back — this is their home. Their return depends on the reconstruction of critical infrastructure. People are trying to return to the city's neighborhoods where water and electricity supplies have been already restored," Pushilin said.

However, according to the republic's head, there are still some difficulties with jobs since many enterprises have yet to be fully restored. Nevertheless, people are able to find jobs in their specialty via the city's career centres, or get a job in district development which is in high demand in Mariupol right now, Pushilin said.
12:17 GMT 12.06.2022
Safe Navigation Ensured in Mariupol Port
The safety of navigation has been ensured in the port of Mariupol, the Russian military said on Sunday.

"Yesterday, 16 mines were found and neutralised, five of them were in the port's water area, and the rest were anti-landing mines on the beach. Until the end of the day, the beach will be completely cleared," an officer said.

According to head of the Donetsk People's Republic (DPR) Denis Pushilin, the port of Mariupol has been operating in a normal mode since the end of May, and is now open for both exports and imports.

"All of this [temporary difficulties with electricity and water supplies] is in the process of adjustment, and the works will be completed soon. But with the help of floating cranes, the loading and unloading works are already possible. In fact, we are now unloading for exports. Also, we already have imported supplies to the territory of the DPR," Pushilin told a press conference with Russian and foreign journalists.

Mariupol, a coastal city in the breakaway DPR, came under the control of Ukrainian troops during the 2014 offensive. On 7 March, a senior DPR military said that the Russian and DPR forces surrounded the city and were clearing it of Ukrainian troops, including the nationalist Azov battalion. Numerous Ukrainian mines were later found on the territory of the Mariupol port.

On 24 February, Russia launched a military operation in Ukraine after the breakaway republics of Donetsk and Lugansk appealed for help in defending themselves against Ukrainian forces. Russia said that the aim of its operation is the "demilitarization and denazification" of Ukraine.
11:17 GMT 12.06.2022
Russian Black Sea Fleet Launches Kalibr Missiles From Frigate - Video
10:24 GMT 12.06.2022
Russian Passports Issued in Melitopol, Zaporozhye Region
Head of the military-civil administration of the Zaporozhye Region Yevgeny Balitsky handed over Russian passports to dozens of the region's residents, promising that "Russia will not go anywhere," a Sputnik correspondent reported.

The ceremony of presenting passports in Melitopol is timed to coincide with the Russia Day.

"Today, on the Russia Day, I congratulate everyone who has become a citizen of a huge, great, fair country with pride in my heart. This is another proof that Russia will not go anywhere. We are here forever. These lands were at one time conquered by the tsars, rebuilt by the Soviet Union, and will develop together with the entire people of Ukraine," Balitsky said at the ceremony.

The Russian troops have taken control of part of Zaporozhye Region in the course of the special military operation in Ukraine. Local military-civilian administrations have been formed, the broadcasting of Russian TV channels and radio stations has been launched, and trade ties with Crimea are being restored. The region has announced plans to become a constituent entity of the Russian Federation.
09:16 GMT 12.06.2022
Russian MoD Shares Video of Ka-52 Helicopters Targeting Ukrainian Army's Strongholds

Situation in Ukraine
WATCH Russian Ka-52 Helicopters Strike Ukrainian Army's Strongholds
09:15 GMT 12.06.2022
Russian MoD Offers Latest Updates on Special Op in Ukraine
08:34 GMT 12.06.2022
Russian Kalibr Missiles Destroy Warehouse of ATGMs, MANPADS and Artillery Shells Delivered to Kiev From US and Europe, Russian MoD Says
07:58 GMT 12.06.2022
Donetsk: With Support of Russian Army, DPR Forces Take Control of 237 Villages and Towns, Including Bogorodichnoye and Prishib
07:55 GMT 12.06.2022
DPR Forces Together With Russian Army Destroy Three Ukrainian Tanks, Six Firing Points and Up to 70 Troops During the Day, Donetsk Says
06:55 GMT 12.06.2022
Estonia's Prime Minister Urges West to Refrain From Having Any Business With Russia
Estonian Prime Minister Kaja Kallas on Sunday urged Western countries to refrain from having any business ties with Russia in response to its special military operation in Ukraine.
"Our policies must be rooted in the understanding that the Russian threat will not go away tomorrow. There should be no return to business as usual. In fact, there should be no business at all," Kallas told The Telegraph.
The prime minister added that Russia must further be isolated "economically as well as politically."
She also said that the West "must be careful with premature calls for ceasefire and peace" between the warring parties in Ukraine.
During Kallas' meeting with UK Prime Minister Boris Johnson on June 6 in London, the sides were discussing the possibility of establishing a NATO division-level management structure in Estonia. Kallas said that more details on the initiative will be established for the NATO Summit in Madrid later in June. The sides also agreed that "NATO must change its fundamental defense and deterrence position on the east wing and specific decisions regarding this matter must be taken at the NATO Summit."