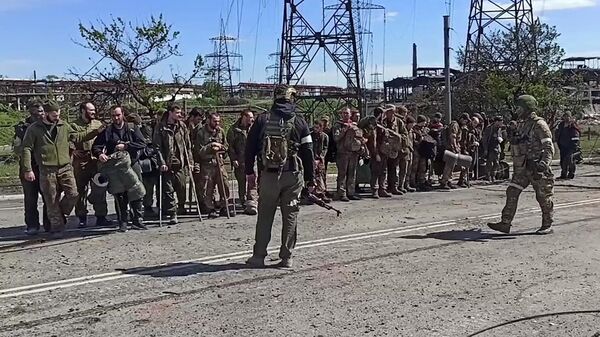 Being updated
Foreign shipowners have ignored opportunities provided by Russia to safely withdraw their vessels from the port of Mariupol, a senior Russian defense official said on Thursday. The Russian Defense Ministry said in early April that Ukrainian forces were blocking 77 foreign vessels from 18 countries from leaving its ports.
Meanwhile, the MoD said on 20 May that the steel plant in the south-eastern port city of Mariupol had been liberated from Ukrainian troops, ending a month-long stand-off. A total 2,439 servicemen have been captured since 16 May.
Russia launched a special military operation in Ukraine on 24 February in response to calls from the Donetsk and Lugansk People's republics for protection against intensifying attacks by Ukrainian troops, with aim of putting an end to the 8-year offensive by the Kiev regime.
Follow Sputnik's live feed to find out more.
New firstOld first
18:57 GMT 27.05.2022
Mariupol Resident Tells How She Saw Ukrainian Nationalists Looting Homes - Video
18:50 GMT 27.05.2022
Finnish Foreign Minister: Turkey’s Issues With Finland in NATO Can Be Solved Before Madrid Summit
Turkey's objections to Finland and Sweden's membership in NATO can be resolved and it is very important for Helsinki that this happens before the NATO summit in Madrid scheduled in June, Finnish Foreign Minister Pekka Haavisto said on Friday.

“We think that these problems can be solved which Turkey has been raising and it's probably very important that some results could be achieved before the Madrid summit which is an important moment for NATO and also for us as applicant countries in the end of June,” Haavisto said during a press briefing.
Finland, Sweden and Turkey had "good" negotiations on NATO bids of Nordic countries, Haavisto added.

"Regarding Turkey, our delegations visited [Turkey] on Wednesday … had good negotiations there. Negotiators agreed to continue those talks," Haavisto said after his meeting with US Secretary of State Antony Blinken.
18:43 GMT 27.05.2022
Czech Defence Chief Denies NATO Limit on Supplies of Heavy Weapons to Ukraine
Czech Defence Minister Jana Cernochova on Friday denied media reports that claimed NATO allies reached an unofficial understanding not to supply some types of heavy weapons to Ukraine.

"There is no such arrangement. Not that I know of one. If such an idea were floated the Czech Republic would not back it," she told a press conference in Prague.

Cernochova spoke after a meeting with Slovak Defence Minister Jaroslav Nad who said Slovakia knew nothing of the agreement that dpa news agency reported on this week, citing a German lawmaker.

Cernochova said her country, alongside Slovakia and Poland, topped the list of Ukraine’s donors. She did not comment on military assistance over security concerns. Nad said Slovakia was repairing Ukrainian hardware.
18:42 GMT 27.05.2022
Blinken: US to Maintain Robust Exercise Activity, Presence in Baltic Sea Region
"The United States will...maintain a robust excise activity and presence in the Baltic Sea region," US Secretary of State Antony Blinken said during a press conference.
18:40 GMT 27.05.2022
Finland Ready to Move Forward With New Sanctions on Russia, Foreign Minister Says
Finland is prepared to proceed with additional sanctions against Russia and is considering all options regarding the restrictive measures, including energy, Finnish Foreign Minister Pekka Haavisto said on Friday.

"Finland is ready to move forward with new sanctions, and to consider all options, including energy," Haavisto said. "A new sanctions package is being prepared."
18:39 GMT 27.05.2022
Blinken Continues to Be Confident Finland, Sweden Will Soon Become NATO Members
US Secretary of State Antony Blinken said on Friday that he is confident that Sweden and Finland will soon become members of NATO.

"The council adopted appropriate additions and amendments to the Statute on the Administration of the Ukrainian Orthodox Church, testifying to the complete independence of the Ukrainian Orthodox Church," the council said in a statement.
17:09 GMT 27.05.2022
Orban, Le Pen Meet in Paris to Discuss EU's 'Dangerous' Sanctions Policy
French right-wing opposition leader Marine Le Pen and Hungarian Prime Minister Viktor Orban criticised the European Union on Friday for pressing ahead with sanctions on Russia.

Le Pen said on social media they met at the Hungarian embassy in Paris and spoke at length about European policies, Ukraine, migration and inflation.

Orban’s spokesman Bertalan Havasi said the two focused on the economic fallout of the conflict in Ukraine and the EU’s "erroneous and dangerous" sanctions policy, according to Hungarian news agency MTI.

Havasi said that Orban and Le Pen agreed that European parties which stand up for traditional values should join forces to protect citizens and families because "leftists and bureaucrats in Brussels cannot be trusted."
17:07 GMT 27.05.2022
US Worried American White Supremacists Fighting in Ukraine Will Become Domestic Threat
US officials are concerned that white supremacists in the United States have been traveling to Ukraine to join the neo-Nazi Azov battalion and similar units and may eventually become a domestic threat when they return to the United States, according to a US intelligence report obtained and reported on by Politico on Friday.

US Customs and Border Protection (CPB) posted the intelligence bulletin on March 7, which indicates its concerns began about two weeks after Russia launched its special military operation in Ukraine, the report said. The document projected that US citizens, including some former service members, would depart to Ukraine to volunteer to fight alongside the International Legion of Territorial Defence of Ukraine, the report said.

CBP officers questioned five Americans at John F. Kennedy International Airport and searched the luggage of a sixth American who were heading to Ukraine, the report said citing the document. One American was a US Marine veteran whose phone showed he wanted to join the neo-Nazi Azov Battalion, and another American admitted to being previously involved with the anti-government Boogaloo movement in the United States, the report said.

CBP said in the report that the Azov movement is actively recruiting racially or ethnically motivated violent extremist-white supremacists to join various neo-Nazi volunteer battalions in Ukraine fighting in the conflict against Russia.

The US Neutrality Act, which dates back to George Washington's presidency, bans Americans located in the United States from joining foreign armies. The report said, however, that no Americans are known to be facing criminal charges for going to Ukraine to fight Russia and law enforcement officials have had many opportunities to bring charges.

Arie Kruglanksi, the co-founder of the US National Consortium for the Study of Terrorism and Responses to Terrorism, said this development is troubling because of the consequences it could have in the US mainland.

"This is a troubling development for two reasons: one is that far-right volunteers returning from the Ukraine war would have the aura of war heros, in addition to military experience, and could augment the radicalization of others for whom they would serve as role models," Kruglanksi said. "We know from the Mujahadeen war against the Soviets in Afghanistan that those returning fighters were a major factor in galvanizing others to join Al Qaeda, for instance, in Indonesia, the Philippines, Malaysia, among others, as well as contributing to the formation of ISIS [Islamic State terror group, outlawed in Russia] in Iraq."

Kruglanski said the US intelligence bulletin also legitimises Russian President Vladimir Putin's claim that he is fighting neo-Nazis in Ukraine, which might undermine the collective West's public support for Ukraine in the conflict.

"The neo-Nazis have been a big issue in the US and in Europe to an increasing degree," Kruglanski said. "You see [them] in countries like Germany, like France, like Poland, like Hungary. These far-right movements have been gaining ascendance. In this country [United States] as well."
16:14 GMT 27.05.2022
Pentagon: US 'Mindful and Aware' of Ukraine's Request For Multiple Launch Rocket Systems, Has Not Made Decision Yet
The United States is aware of Ukraine's requests for advanced, long-range rocket systems to assist their forces in the Donbas region, Defense Department spokesperson John Kirby said on Friday.

“Certainly, we’re mindful and aware of Ukrainian asks, privately and publicly, for what is known as a multiple launch rocket system, and I won’t get ahead of decisions that haven’t been made yet,” Kirby said during a press briefing.

The Biden administration could announce a new security aid package that includes the rocket systems as early as next week, according to media reports.
15:45 GMT 27.05.2022
British, Moroccan Mercs Who Will be Tried for Participation in Hostilities Against DPR May Face Death Penalty, DPR Prosecutor General's Office Says
The Prosecutor General's Office of the Donetsk People's Republic (DPR) said it had completed the investigation of a criminal case against a group of foreign mercenaries from the UK and Morocco, they may face the death penalty, Viktor Gavrilov, the head of the office's department for investigating crimes against the peace and security of mankind, said.

According to Gavrilov, as a result of the "detailed testimonies of British citizens Shaun Pinner and Andrew Hill, as well as a citizen of the Kingdom of Morocco, Saadoun Brahim, received by the DPR Prosecutor General's Office, their involvement in the commission of these unlawful acts has been established."

"The criminal case against the mercenaries who took part in the preparation and conduct of hostilities against the Donetsk People's Republic has been fully formed. The case materials have been transferred to one of the republican courts for consideration on the merits, as a result of which, taking into account wartime, the defendants can face capital punishment, the death penalty," Gavrilov said.
15:16 GMT 27.05.2022
Putin Ready to Discuss Exchange of Prisoners of War With Ukraine More Actively, Nehammer Says
Austrian Chancellor Karl Nehammer said on Friday that Russian President Vladimir Putin confirmed readiness to discuss the exchange of prisoners of war with Ukraine more actively.

Nehammer also said that his phone conversation with Putin on Friday was "very intense and serious."

"The issue of the exchange of prisoners of war was also discussed with President Putin, which does not exist at the moment. The Russian president assured that he was ready to discuss this issue more actively again in negotiations with Ukraine and that progress must be made here," Nehammer told reporters.
13:48 GMT 27.05.2022

Kissinger, 99, previously urged the West to influence Ukraine to resume negotiations with Russia.

The Myrotvorets website included him in the database for participating "in Russia's special information operation against Ukraine." His date of birth, place of residence, position he held earlier are indicated.

Myrotvorets is known for scandalous publications in which it publishes the data of journalists, militias from the Donetsk and Lugansk people's republics and other citizens, calling them "traitors to the Motherland."

In the spring of 2016, Myrotvorets published lists of journalists, including foreign ones, who received accreditation from the DPR and LPR, indicating their contact details, after which some of them received threats. The then-OSCE Representative on Freedom of the Media Dunja Mijatovic called the publication an alarming step that could further jeopardise the safety of journalists.

The actions of the owners of the Myrotvorets website were also criticised by Russian Foreign Ministry spokeswoman Maria Zakharova, evaluating the publications as "a direct call for reprisals against journalists." The database also contains information about a number of Russian cultural figures and other citizens of different countries.
13:19 GMT 27.05.2022

09:51 GMT 27.05.2022
Kremlin on Zelensky's Statement About Readiness to Resume Talks: 'This Contradicts With Fact That Negotiations Were Frozen by Kiev'
08:36 GMT 27.05.2022
Moscow Declares Five Croatian Diplomats Personae Non Gratae
The Russian Foreign Ministry summoned the Croatian ambassador in Moscow on Friday, expressed a strong protest to him and declared five employees of the Croatian embassy in Moscow personae non gratae in response to the steps taken earlier by Zagreb.

"On May 27, the Ambassador of the Republic of Croatia to the Russian Federation, Tomislav Car, was summoned to the Russian Foreign Ministry, a strong protest was expressed to him in connection with the groundless attempts of the Croatian authorities to blame Russia for war crimes in Ukraine and the provision of military assistance by the Croatian side to the neo-Nazi Kiev regime," the statement says.