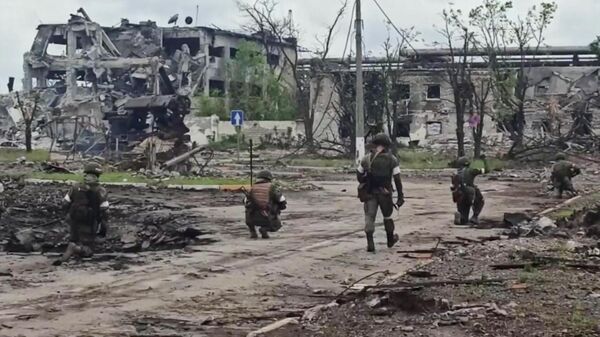 Russia launched a special military operation in Ukraine on 24 February in response to calls from the Donetsk and Lugansk People's republics for protection against intensifying attacks by Ukrainian troops.
Russian armed forces and Donetsk and Lugansk People's republics militias continue to advance the special operation in Ukraine.
The Russian Defence Ministry said on 20 May that the steel plant in the south-eastern port city of Mariupol had been liberated from Ukrainian troops, ending a month-long stand-off. A total 2,439 servicemen have been captured since 16 May.
Before that, Ukrainian forces held at Azovstal reached a deal on removing the wounded from the plant and transferring them to a medical facility in the Donetsk People's Republic.
Follow Sputnik's live feed and Telegram channels to get the latest updates:
Sputnik News US — https://t.me/sputniknewsus
Sputnik News India — https://t.me/sputniknewsindia
New firstOld first
16:05 GMT 26.05.2022
US Training 20 Ukrainians on Danish Harpoon Anti-Ship Missiles, Senior Defence Official Says
The United States is training nearly 20 Ukrainian soldiers abroad on how to use Harpoon missiles supplied by Denmark in response to Russia’s special military operation, a senior US Defence Department official said on Thursday.

“We're also helping facilitate some training of Ukrainians for coastal defence missiles now that the Danes are going to be contributing Harpoon launchers and vehicles. It [Harpoon] was not designed for coastal defence. It was designed for anti-ship warfare, ship-to-ship warfare,” the official said during a press briefing. “That's happening right now, outside of Ukraine, of course, and just under 20 Ukrainians are going through that training right now.”
15:52 GMT 26.05.2022

Situation in Ukraine
Russia Adjusts Routes of Humanitarian Corridors From Ukrainian Ports as Mariupol Port Clear of Mines
15:44 GMT 26.05.2022
Putin to Draghi: Difficulties With Food Supplies Linked Among Other Things to Logistical Failures as Well as to West's Financial Policies
Russian President Vladimir Putin and Italian Prime Minister Mario Draghi discussed the situation in Ukraine and the global food crisis during a phone conversation on Thursday, the Kremlin said.

"The situation in Ukraine was discussed. In particular, Vladimir Putin informed [Draghi] about the ongoing work to establish a peaceful life in the liberated cities of Donbass. He spoke in detail about the steps taken to ensure the safety of navigation, including the daily opening of humanitarian corridors for the exit of civilian ships from the ports of the Azov and Black Seas, which is hindered by the Ukrainian side," the Kremlin said in a statement.

Putin and Draghi also talked about Moscow-Kiev negotiations, which were "frozen" by the Ukrainian side, and the global food crisis, the Kremlin added.

"Vladimir Putin emphasized that Russia is ready to make a significant contribution to overcoming the food crisis through the export of grain and fertilizers, provided that politically motivated restrictions from the West are lifted," the statement read.
14:09 GMT 26.05.2022
Ukrainian Forces Continue Shelling of Village in Russia's Belgorod Region, One Woman Injured, Governor Says
13:47 GMT 26.05.2022
DPR Journo Says Italian TV Channels Ask Him to Sell His Videos, But Say They Will Dub Footage on Their Own
12:27 GMT 26.05.2022
Erdogan and Macron Discuss Finland & Sweden's NATO Accession
Turkish President Recep Tayyip Erdogan discussed the accession of Finland and Sweden to NATO with his French counterpart, Emmanuel Macron, during a telephone conversation on Thursday, with Ankara reiterating the need for the countries to stop their alleged support for terrorism, the Turkish Directorate of Communications said.

"President @RTErdogan stressed that Sweden and Finland's links with individuals and so-called organizations controlled by the PKK/YPG [the Kurdistan Workers' Party and Kurdish YPG militia] terrorist organization didn't comply with the spirit of alliance at NATO," the directorate wrote on Twitter.

Macron, in turn, urged the Turkish side to respect the sovereign choices of Finland and Sweden to join the alliance and expressed his hope that a solution to the Turkish veto on NATO's expansion would be found soon, according to the Elysee Palace.

On May 18, Finland and Sweden submitted their NATO membership applications to Secretary General Jens Stoltenberg. Whether the two countries will be admitted to the alliance hinges on unanimous approval by NATO member countries.

On May 19, Erdogan said that Ankara had informed its NATO allies that it would say no to the membership of Stockholm and Helsinki, citing their involvement in supporting the Kurdistan movement, which Turkey regards as terrorist and deems as a serious threat to its national security. Turkish Foreign Minister Mevlut Cavusoglu stressed the need for a written undertaking from Finland and Sweden that they will stop supporting terrorism.
12:24 GMT 26.05.2022
Ukrainian Militants Explain Why They Had to Retreat During One of the Battles Against Russian Army - Video
11:33 GMT 26.05.2022
Resident of Popasnaya in LPR Tells How Ukrainian Forces Fired Toward Civilians Preventing Them From Collecting Water - Video
11:27 GMT 26.05.2022
Iranian Foreign Minister Slams US, NATO for Provoking Ukraine Conflict
A number of provocative acts by the United States and NATO to justify their presence in Ukraine prompted Russia to start a military operation in that country, Iranian Foreign Minister Hossein Amir-Abdollahian said on Thursday.

The Iranian foreign minister added that Tehran supports dialogue and diplomacy, as the only means of resolving the Ukrainian conflict.

On 24 February, Russia began a military operation in Ukraine responding to calls for help from the breakaway republics of Donetsk and Lugansk. The West and its allies responded by imposing comprehensive sanctions against Russia while increasing their military support for Ukraine.
10:50 GMT 26.05.2022

IAEA Director General Rafael Grossi said during the meeting with Japanese Prime Minister Fumio Kishida earlier in May that he is planning to visit the Zaporozhskaya NPP in the nearest future.

"The [nuclear] agency is in contact with both the Ukrainian side and the Russian side on the organization of this trip. Naturally, the organization of such a trip is associated with the need to resolve a number of logistical and technical issues," Peskov told reporters.

Kremlin: West Should Abolish Illegal Decisions That Prevent Grain Export From Ukraine
09:48 GMT 26.05.2022
Ukrainian Forces Strike Settlement in Donbass With 40 Grad Rockets, JCCC in LPR Says
09:41 GMT 26.05.2022
Russian MoD Offers Latest Updates on Special Op in Ukraine
09:29 GMT 26.05.2022
US Military Truck Found at Azovstal Plant in Mariupol - Video
09:04 GMT 26.05.2022
Kiev Agrees With Budapest to Extend Access to Facilities for Importing Gas From Hungary to Ukraine - Until 31 March 2023 - Operator
Ukrainian and Hungarian gas transmission system operators have agreed to extend access to guaranteed capacities for importing natural gas from Hungary to Ukraine until 31 March 2023, the Gas Transmission System (GTS) Operator of Ukraine
"Ukraine's GTS operator has greed with Hungarian operator FGSZ to extend access to guaranteed capacities for the import of natural gas from Hungary to Ukraine until March 31, 2023. Consequently, gas traders will be able to book new quarterly capacities to deliver gas for Ukraine's needs," the operator wrote on Telegram.
08:05 GMT 26.05.2022
Ukrainian Troops Hiding at Azovstal Plant Territory Found and Detained - DPR Head
Ukrainian military, who hid or lagged behind during the surrender of the main forces, were identified and detained at the Azovstal steel plant in Mariupol, Donetsk People's Republic (DPR) leader Denis Pushilin said in an interview with Sputnik.

When asked whether it can be said for sure that there were no Ukrainian military or nationalist militants left on the territory of Azovstal, Pushilin answered in the negative, adding that it is impossible to be 100% sure, as they could hide or lag behind.

"There are already such [military] identified, sent to the place of detention," Pushilin said, noting that it is impossible to be declare that the territory, which is quite large, is completely liberated, until it is thoroughly checked.
07:21 GMT 26.05.2022
DPR Head Unveils New System of Supplies of Raw Materials and Products, Taxes Created in Kherson and Zaporozhye Regions
07:08 GMT 26.05.2022
Referendum to Join Russia Expedient After Reaching LPR, DPR Constitutional Borders - DPR
Holding a referendum on joining Russia is expedient only after reaching the constitutional borders of the Donetsk and the Luhansk people's republic (DPR and LPR), DPR leader Denis Pushilin said in an interview with Sputnik.

"The results of such a referendum are quite obvious, they are quite understandable. But it will be expedient to implement them after we reach the constitutional borders of the Donetsk and Luhansk people's republics. There is a time for everything," Pushilin said.