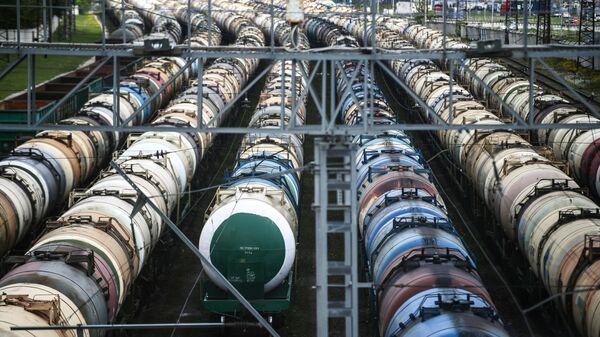 Since the beginning of the special operation in February, Russian forces have eliminated 177 Ukrainian warplanes, 990 UAVs, 3,226 tanks and other armoured vehicles, 421 rocket launchers and many other units of military equipment, the MoD said.
Russian forces and the Donbass militias continue to advance in the special operation, with clashes occurring in the DPR settlements of Avdeevka, Novoselovka and Krasny Liman. At the same time, Ukrainian forces continue to shell the territory of the Donbass republics.
In February, Russia launched a special military operation in Ukraine amid the intensifying attacks carried out by Kiev's troops in the DPR and LPR. President Vladimir Putin stated that Russia's op was launched to stop the eight-year-long war waged by Ukraine in Donbass. He noted that Kiev's attacks, which have claimed over 13,000 lives over the years, amounted to genocide and stressed that Russia's goal is the "demilitarisation and denazification" of Ukraine.
Follow Sputnik's live feed and Telegram channels to get the latest updates:
Sputnik News US — https://t.me/sputniknewsus
Sputnik News India — https://t.me/sputniknewsindia
Table of contents
New firstOld first
01:56 GMT 25.05.2022
Zaporozhye Region to Set Course for Becoming Part of Russia - Administration

Russia
US Will Not Renew Russia Debt Payment Exemption Set to Expire on May 25, Treasury Says
17:29 GMT 24.05.2022
US-Led Collective West Engaged in Proxy War Against Russia in Ukraine - US Congressman
WASHINGTON (Sputnik) - The collective West, led by the United States, is engaged in a proxy war with Russia in Ukraine and the latter's role is to do the fighting on the ground, US Congressman Seth Moulton said during a panel discussion at the World Economic Forum on Tuesday.
“Well, of course, it's a proxy war in a sense that, you know, Ukraine is doing the fighting, we're providing all the munitions and much more technology and other things. And in so many ways, this is a battle between Russia and the West, the West largely represented and led by us,” Moulton said.
The congressman also drew a parallel with the situation regarding Taiwan and noted that what worked in Europe against Russia will not work in Asia against China, given that the United States does not have a military alliance to draw upon similar to NATO.
17:09 GMT 24.05.2022
Ukrainian Prosecutor General Says Exchange of Convicted Russian Soldier 'Possible'
17:02 GMT 24.05.2022
Von der Leyen Says No Chance of Striking Deal on Russian Oil Embargo at Next EU Summit
MOSCOW (Sputnik) - European Commission President Ursula von der Leyen on Tuesday ruled out the possibility of reaching an agreement on an embargo on Russian oil at the upcoming EU summit at the end of May.
"I think it is not an appropriate topic to be solved on the European Council because it’s very technical what we’re discussing. We’re speaking about landlocked countries that need alternative supply via pipeline, so you have to speak about the investment in the pipelines, to increase the supply, and we’re talking about refineries that have to be updated, and investment and renewable energy," von der Leyen told Politico news outlet, adding that she did not want to raise "false hopes" of reaching an agreement on the oil embargo at the summit.
Earlier in May, von der Leyen presented the sixth package of sanctions against Russia. Among other points, it proposes banning Russian oil imports. The package needs to be unanimously approved by all member states to take effect, but the members have still not reached an agreement due to objections from Hungary and Slovakia. Hungarian Prime Minister Viktor Orban earlier described the potential embargo of Russian oil by the European Union as "tantamount to atomic bomb" for Budapest and that Hungary needs five years to diversify its energy supplies.
16:51 GMT 24.05.2022
US Commerce Chief Says Export Control Restrictions Related to Russia Not Going Away 'Anytime Soon'
15:47 GMT 24.05.2022
Active Phase of Krasny Lyman's Liberation Underway, Pushilin Says
14:30 GMT 24.05.2022
Russian MoD Says Mariupol Port Cleared of All Landmines
13:55 GMT 24.05.2022
EU May Use Frozen Russian Assets to Rebuild Ukraine - European Commission Chief
Russian assets frozen by the European Union as part of its sanction campaign may be used to fund the rebuilding of Ukraine in accordance with a reconstruction platform proposed by Brussels to Volodymyr Zelenskyy, European Commission President Ursula Von de Leyen said on Tuesday.
Last Wednesday, EU Commission Executive Vice-President Valdis Dombrovskis said the fate of Russian assets would be decided at the national level of EU countries.

"With the same resolve, we will help Ukraine rise from the ashes. That's the idea behind the reconstruction platform that I have proposed to President @ZelenskyyUa. We need everyone on board. And we should leave no stone unturned – including possibly using Russian assets," Von der Leyen wrote on Twitter, summing up her speech at the World Economic Forum's annual summit in Davos.

Russia's Special Operation in Ukraine
Russian Defence Minister Shoigu Warns of Threat of Ukrainian Nuclear Weapons Development
08:24 GMT 24.05.2022
UK Backs Idea of Launching Naval Coalition to Unlock Ukraine’s Grain Exports – Reports
UK Foreign Secretary Liz Truss has endorsed the idea of creating a multinational naval coalition to enable Ukraine’s grain exports, now halted due to the Odessa port blockage, British media reported on Tuesday.
The initiative of engaging a multinational naval effort for unblocking the Black Sea port of Odessa was proposed by Lithuanian Foreign Minister Gabrielius Landsbergis during his talks with Truss in London on Monday. He suggested that ships carrying Ukrainian grain be protected by a non-NATO naval escort when they pass by Russian warships in the Black Sea.
The Times reported, citing a diplomatic source, that Truss has endorsed Landsbergis' initiative and the UK government is now in talks with allies about sending warships to the Black Sea.
A multinational naval undertaking in the Black Sea will likely require approval of the United States and coordination with Turkey, which runs the Bosphorus Strait, the report said. Countries like Egypt, which were affected by the disruption of Ukrainian grain exports, are expected to be willing to contribute to the initiative.
08:21 GMT 24.05.2022
Donbass Doctors Say ICRC, WHO Ceased to Supply HIV, Tuberculosis Treatment

"All Greek [gas importer] companies switched to payments in rubles," the source said, adding that they opened account with Gazprombank and payments are in progress.