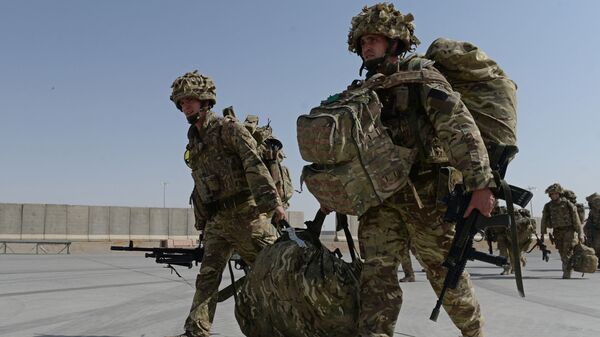 LIVE UPDATES: Top US General Says No Plans Yet to Deploy Troops to Ukraine

Over the past day only, Russian forces targeted 583 Ukrainian troop and military equipment concentration areas, 41 command posts, and 76 artillery and mortar units, including three Grad MLRS batteries, the ministry of defence stated.
Russian and Donbass troops continue to advance amid the special op in Ukraine. Meanwhile, they are also engaged in demining territory around the Azovstal plant in Mariupol following the surrender of Ukrainian radicals.
Over the weekend, the Russian and Donbass forces completely seized the compound, and a total of 2,439 Ukrainian soldiers and Azov neo-Nazi fighters laid down their arms.
Follow Sputnik's live feed and Telegram channels to get the latest updates:
Sputnik News US — https://t.me/sputniknewsus
Sputnik News India — https://t.me/sputniknewsindia
Table of contents
New firstOld first
03:36 GMT 24.05.2022

Russia's Special Operation in Ukraine
Authorities in Kherson Region to Call for Russian Military Base in Bid to Guarantee Security
01:29 GMT 24.05.2022
Russian to Receive Status of State Language in Kherson Region - Authorities
Russian, along with Ukrainian, will receive the status of a state language in the Kherson Region liberated from Ukrainian nationalists, Kirill Stremousov, deputy head of the regional military-civilian administration, told Sputnik.

“Russian, along with Ukrainian, will become a state language in the Kherson region. The Russian language will become the main language for office work, communication and all issues of national importance. We do not ban the Ukrainian language and will not somehow play any kind of language story," Stremousov said.

According to him, teaching in schools and universities will be conducted in Russian, but at the request of parents, Ukrainian classes can also be formed.

The Russian military, during a special operation to demilitarize Ukraine, took control of the Kherson Region in the south of the country and the Azov part of the Zaporozhye Region. Military-civilian administrations have been formed in the regions, broadcasting of Russian TV channels and radio stations has begun, and trade ties with Crimea are being restored.
23:22 GMT 23.05.2022

Russia
ICRC Says Received Russia's Request Regarding Prisoners of War, Will Answer Soon
17:38 GMT 23.05.2022
Top US General Says No Plans Yet to Deploy Troops to Ukraine, Decision Falls on Biden
WASHINGTON (Sputnik) - The United States has no plans to deploy forces to Ukraine amid Russia's special military operation there and the decision would be for President Joe Biden to make, US Joint Chiefs of Staff Chairman Gen. Mark Milley said on Monday.
"At the end of the day, any reintroduction of US forces into Ukraine would require a presidential decision, so we're a ways away from anything like that," Milley said during a press conference following the second Ukraine Defense Contact Group meeting.
The Defense Department is developing courses of action with respect to Ukraine but no option has been presented yet to Defense Secretary Austin to deploy US forces to the country.
Earlier on Monday, US media reported that Biden is weighing a decision to possibly send special operation forces to Ukraine to protect the US Embassy in Kiev.
16:46 GMT 23.05.2022
Pentagon: 20 Countries Offering New Arms Packages for Ukraine
14:17 GMT 23.05.2022
Fake Grenade Found Near Russian Consulate in Brazil - Media
14:16 GMT 23.05.2022
Starbucks Leaving Russia, Closing 130 Cafes
14:15 GMT 23.05.2022
Biden Admin Mulls Sending US Special Operations Forces to Protect its Kiev Embassy - CNN
WASHINGTON (Sputnik) - The Biden administration is considering the possibility of using special operations forces to protect the United States’ embassy in Kiev, CNN reported on Monday.
The idea to send special operations forces to protect the US embassy in Kiev is in the preliminary stages of consideration and has yet to be brought to President Joe Biden for a final decision, the report said, citing administration officials familiar with the matter.
The United States does not believe that Russia would overtly attack the embassy, but fears the possibility of missiles or air defense systems inadvertently hitting the facility, the report said.
While embassies are normally guarded by Marine Corps personnel, there is a consensus that the security situation in Ukraine necessitates additional troops suitable to address the security challenges, the report added.
12:40 GMT 23.05.2022
Ukrainian Forces Shell Settlement North of DPR With 15 Grad Rockets
12:00 GMT 23.05.2022
Sweden, Finland to Further Discuss NATO Membership With Turkey in Near Future - Stockholm

"Sweden and Finland will continue their bilateral and trilateral negotiations with Turkey in the near future, negotiations will take some time," Swedish Prime Minister Magdalena Andersson said, as quoted by the Star newspaper.

Commenting on the talks with Erdogan over the weekend, the prime minister assessed them as positive. The leader added that she looks forward to further negotiations with Ankara, noting that Sweden is among the first states to label the Kurdistan Workers' Party as terrorists.
11:19 GMT 23.05.2022
Russian Ruble Introduced in Kherson, Local Administration Says
10:45 GMT 23.05.2022
Head of Russian-Controlled Enerhodar City Out of Danger After Murder Attempt - Police
The life of head of the Russian-controlled city of Enerhodar in the Zaporozhye region, Andrei Shevchik, is out of danger after an assassination attempt, the regional police told Sputnik on Monday.

"The mayor, unfortunately, received burns and injuries, but the life of both the head of Enerhodar and his guards is out of danger", the police said.

Shevchik and two of his guards were injured in an explosion near his house. An improvised directional explosive device was planted in an electrical cabinet, the Investigative Committee said. According to local law enforcement agencies, Shevchik repeatedly received threats from Ukrainian nationalists after he took the pro-Russian line.
10:11 GMT 23.05.2022
Attempt to Assassinate Energodar Mayor Aimed to Browbeat Locals, Police Say
10:01 GMT 23.05.2022
Ukrainian Court Sentences Russian Serviceman to Life in Prison
09:46 GMT 23.05.2022
Erdogan 'Expects' NATO Allies to Take Concrete Steps to Address Turkey's Concerns Over Sweden's Bid

World
Erdogan 'Expects' NATO Allies to Take Concrete Steps to Address Turkey's Concerns Over Sweden's Bid
09:31 GMT 23.05.2022
Moscow Considering Rome's Proposal on Peaceful Settlement of Ukrainian Crisis - Russian MFA
09:26 GMT 23.05.2022
Russian Black Sea Submarine Launches Kalibr Missiles Targeting Ukrainian Forces
07:39 GMT 23.05.2022
Berlin Says Some Countries Need More Time to Abandon Russian Oil
Newsfeed
0
Access to the chat has been blocked for violating the rules . You will be able to participate again through:∞. If you do not agree with the blocking, please use the feedback form
The discussion is closed. You can participate in the discussion within 24 hours after the publication of the article.
To participate in the discussion
log in or register
loader
Chats
Заголовок открываемого материала