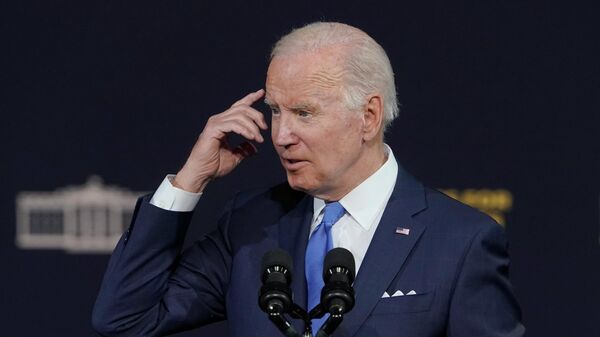 Being updated
Ukrainian officials are frustrated that their calls for the United States to arm them with long-range MLRS are being resisted by the White House, Politico said in a report on Wednesday, citing a congressional staffer with knowledge of recent talks on arming Ukraine.
The Biden administration remains in active discussions about whether to deliver MLRS to Ukraine, with worries persisting at the White House that the Kremlin could view the shipment of such systems as escalatory, the report said.
Analysts recently told Sputnik that US weapons flowing into Ukraine will still fall into the hands of terrorists and end up threatening the United States and its allies even if proposals to boost oversight are implemented.
In February, Russia launched a special military operation in Ukraine to help the Donetsk and Lugansk People's republics (DPR and LPR) fend off intensifying attacks by Ukrainian forces. Russia's Defence Ministry said the operation, which targets Ukraine's military infrastructure, aims to "demilitarise and de-Nazify" Ukraine.
Follow Sputnik's live feed to find out more.
New firstOld first
20:06 GMT 19.05.2022
Two Russian Villages Come Under Mortar Shelling From Ukraine - Governor
20:06 GMT 19.05.2022
No Plans for Biden, Erdogan to Talk Over Issues About Sweden, Finland NATO Bid - Sullivan
19:53 GMT 19.05.2022
US Seeks to Provide Missiles to Ukraine for Use Against Russian Ships - Reports
The White House is considering sending two types of anti-ship missile - Boeing Harpoons and Raytheon-Kongsberg Naval Strike Missiles (NSM), Reuters reported citing three US officials and two congressional sources as saying.

However, the weapons' delivery is being complicated by the fact that there is limited availability of platforms to launch the Harpoons from shore, given that the missile is largely sea-based, the report said.

The Biden administration is considering taking a launcher off of a US ship, according to the officials cited in the report.

There is also reluctance among countries possessing Harpoon missiles to be the first to send them to Ukraine because of concerns about Russian reprisals should a ship be sunk, the officials said.

The United States considers delivery of NSMs to be less logistically challenging, due to the fact that NATO allies could loan available ground-based launchers, the report said.

US Senate Passes $40Bln Ukraine Aid Bill, Sending Legislation to Biden for Finalization
16:50 GMT 19.05.2022
Top US, Russian Brass Discuss Security Issues, Agree to Keep Open Lines of Communication
US Joint Chiefs of Staff Chairman Gen. Mark Milley and Chief of Russian General Staff Gen. Valery Gerasimov spoke on Thursday to address security-related matters and both agreed to keep open lines of communication, Joint Staff spokesman Col. Dave Butler said.
"The military leaders discussed several security-related issues of concern and agreed to keep the lines of communication open," Butler said in a statement.
Specific details of their conversation will be kept private, Butler added.
16:37 GMT 19.05.2022
Blinken Says Ukraine Will Cease to Exist Should it Stop Fighting Against Russia
US Secretary of State Antony Blinken said on Thursday there would be "no more Ukraine" if Kiev stops fighting against Russian forces.
"If Russia stopped fighting tomorrow, the war would end. If Ukraine stopped fighting, there would be no more Ukraine," Blinken said during remarks at the UN Security Council.
Blinken is in New York City this week to discuss with the United States' international partners the global food shortage and the conflict in Ukraine.
16:36 GMT 19.05.2022
Defense Official: US Military Aid to Ukraine No Danger to Supplies for Indo-Pacific
Military aid that the United States is providing to Ukraine within the presidential drawdown authority (PDA) does not endanger materiel being sent to allies in the Indo-Pacific region, a senior US defense official said on Thursday.
"We're not using PDA to provide equipment to Indo-Pacific allies and partners. It's just a completely different, it's a completely different set of priorities, a completely different set of sources. So if you're asking me [whether] because of all the materiel we're providing to Ukraine, we are putting at risk materiel that's going to Indo-Pacific allies. The answer is no," the official told journalists.
On Thursday, the US Senate will vote on a bill to deliver over $40 billion in new military and humanitarian assistance to Ukraine. The bill will increase presidential drawdown authority funding from the $5 billion the Biden administration initially requested to $11 billion.
15:57 GMT 19.05.2022
IMF Engages With Ukraine on 'Daily Basis' Over Kiev’s Financial Needs
The International Monetary Fund (IMF) maintains almost daily contacts with Ukrainian authorities to discuss Kiev’s financial needs, IMF spokesperson Gerry Rice said on Thursday.
“Since the beginning of the war, we have been very closely engaged with the authorities [of Ukraine], and by that I mean almost on a daily basis,” Rice said. “The response by the Ukrainian authorities has been remarkable.”
Rice noted the IMF disbursed $1.4 billion in emergency financing for Ukraine in March and set up a so-called administered account. Such an account allows donors to make contributions in a secure way, he said.
“Canada has pledged $1 billion [US$780 million]. I am not aware of other pledges or commitments at this point,” Rice added.
In April, IMF Managing Director Kristalina Georgieva said that the IMF and Ukraine discussed a follow-up aid package to support the nation's economy after the current crisis ends.
15:22 GMT 19.05.2022
Russian MoD: Russian Chief of General Staff Gerasimov Spoke With US Counterpart Milley by Phone
Newsfeed
0
Access to the chat has been blocked for violating the rules . You will be able to participate again through:∞. If you do not agree with the blocking, please use the feedback form
The discussion is closed. You can participate in the discussion within 24 hours after the publication of the article.
To participate in the discussion
log in or register
loader
Chats
Заголовок открываемого материала