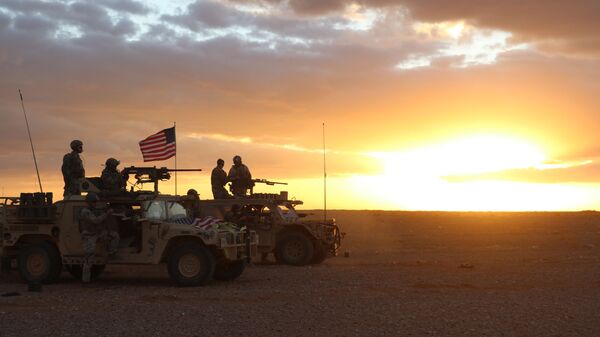 Russia launched the military operation in Ukraine in February, after the Donetsk and Lugansk People's republics (DPR and LPR) asked Moscow for help to withstand intensifying Ukrainian attacks.
Russian armed forces and Donbass militias continue to advance amid the special military operation, pressing Ukrainian forces back from Donbass.
In April, Mariupol, a coastal city in the breakaway DPR with a population of 450,000, came under the control of Russian forces, with the remainder of Azov militants holed up in a local steel plant Azovstal.
On Monday, the Russian Defence Ministry said that Ukrainian forces under siege at Azovstal reached a deal on removing the wounded from the plant to a medical facility in the DPR.
Follow Sputnik's live feed and Telegram channels to get the latest updates:
Sputnik News US — https://t.me/sputniknewsus
Sputnik News India — https://t.me/sputniknewsindia
New firstOld first
19:39 GMT 17.05.2022
US Does Not Believe New Blinken-Lavrov Talks Would Be Constructive - State Department
18:47 GMT 17.05.2022
Russian MoD Delivers Briefing on Ukraine Op:
Ukrainian forces mined a bridge over railway tracks in Sumy, seek to accuse Russian troops of blowing them up;
Azov Neo-Nazis set up barracks in a kindergarten building in Mirnograd, deployed armoured vehicles near a residential district;
'Donbass' Battalion militants deploy heavy weaponry in a residential building in Slavyansk;
Ukrainian nationalists holding vivilians with children hostage in basements in Kharkov region;
Aidar Battalion militants set up firing positions in Zaporozhye hospitals, using staff and patients as 'human shield';
Aidar Battalion militants set up firing positions, deploy artillery and MRLS at Pavlograd church.
18:25 GMT 17.05.2022
Russia-Ukraine Border Checkpoint Shelled - Kursk Region Governor
18:17 GMT 17.05.2022
US Launches Observatory to Analyse Evidence of Alleged War Crimes in Ukraine - State Dept.
WASHINGTON (Sputnik) - The United States has kicked off a new program to collect and assess potential evidence of alleged war crimes in Ukraine, the State Department said on Tuesday.
"The US Department of State is announcing the launch of a new Conflict Observatory to capture, analyze, and make widely available evidence of Russia-perpetrated war crimes and other atrocities in Ukraine," the release said.
Alexander Bastrykin, head of Russia's Investigative Committee, has ordered investigations into all circumstances of mistreatment and executing of Russian soldiers in Ukraine while the head of the Russian National Defense Control Center, Col. Gen. Mikhail Mizintsev, who also leads Russia's humanitarian response coordination headquarters, said international organisations are ignoring Ukraine's war crimes against its citizens.
The State Department said the observatory is being created with an initial $6 million investment with future funding to come from the European Democratic Resilience Initiative (EDRI).
The program encompasses the documentation, verification, and dissemination of open-source evidence related to actions by Russian forces, according to the release. Information analyzed will come from publicly and commercially available information, including satellite imagery and data shared on social media, the State Department said.
In March, the White House announced at least $320 million in funds for EDRI to bolster democratic resilience, advance anti-corruption efforts, and promote respect for human rights in Ukraine and its region, the release added.
The newly announced program is a collaborative effort with Esri, Yale University’s Humanitarian Research Lab, the Smithsonian Cultural Rescue Initiative, and PlanetScape Ai.
17:49 GMT 17.05.2022
Russia Will Not Allow WWIII to be Unleashed But Will Give 'Super Powerful' Response in Event of Attack, Ex-President Medvedev Says
17:25 GMT 17.05.2022
Bloomberg: US Set to Block Russian Debt Payments After Treasury License Expires Next Week
According to Bloomberg, citing people familiar with the matter, Washington is set to block Russia's ability to pay US bondholders after a general license expires on 25 May.
The Treasury Department’s Office of Foreign Assets Control is to allow a general license that expires next week to lapse, the publication claims.
The waiver, issued shortly after the US slapped Russia with a plethora of sanctions over its special military operation in Ukraine in February, has allowed Moscow to continue to pay investors.
However, the Biden administration has decided against extending the waiver in order to keep up financial pressure on Russia, Bloomberg quotes its sources as saying.
At the same time, the outlet points out that yet another "person familiar with the matter" said that Treasury hasn’t made a final decision. Neither Treasury, nor the White House Treasury Department have commented on the reports yet.
17:16 GMT 17.05.2022
Ukraine's Azov Nazis Unconditionally Surrender at Azovstal in Mariupol - Russia's Deputy Envoy to UN
MOSCOW (Sputnik) - Ukrainian militants from the Azov neo-Nazi battalion who had been besieged in the Azovstal steel plant in Mariupol for the past weeks, have unconditionally surrendered, Russia's deputy envoy to the United Nations Dmitry Polyanskiy said on Tuesday.
"I didn't know English has so many ways to express a single message: the #Azovnazis have unconditionally surrendered," Polyanskiy tweeted, commenting on the article by The New York Times that claimed that Azov fighters completed their "combat mission" in Mariupol and "were being evacuated."
The Russian Defence Ministry said that 265 Ukrainian militants from Azovstal laid down their weapons on Monday, including 51 fighters in critical condition. Theu were sent to the Donetsk People's Republic, with those injured receiving necessary medical treatment.
17:09 GMT 17.05.2022
One Person Injured as Village in Russia's Belgorod Region Shelled From Ukrainian Side
17:08 GMT 17.05.2022
Macron Promises Zelensky Increased French Arms Supplies for Ukraine
16:12 GMT 17.05.2022

Situation in Ukraine
Ex-US Commando Trained Ukrainians to Use Javelins Despite Having No Experience
15:25 GMT 17.05.2022
Sputnik Correspondent's Car Comes Under Fire in LPR
15:17 GMT 17.05.2022
Finnish FM Signs Application for Helsinki's Accession to NATO
14:42 GMT 17.05.2022
US Actively Recruiting Daesh Terrorists as Mercs to Participate in Ukraine Hostilities, Russia's Foreign Intelligence Service Says
According to the Russian Foreign Intelligence Service, about 60 Daesh terrorists were released from prisons controlled by Syrian Kurds last month in order to send them to Ukraine.
The intelligence serviced pointed out that the US Al-Tanf base in Syria's Homs province has turned into a terrorist hub where militants loyal to Washington are being trained to be deployed to Ukraine.
"Priority is given to natives of the states of Transcaucasia and Central Asia. The training 'course' in Al-Tanf includes training in the use of available types of anti-tank missile systems, reconnaissance and strike drones MQ-1C, advanced communications and surveillance equipment".
The agency warned that special jihadist units aim at sabotage ops against Russian forces in Ukraine.
*Daesh, also known as ISIS/IS/Islamic State, is a terrorist organisation banned in many countries, including Russia.
14:30 GMT 17.05.2022
Finland, Sweden to Submit NATO Membership Bid Wednesday - Stockholm
14:04 GMT 17.05.2022
Italian Oil and Gas Giant Eni Opening Account in Russia's Gazprombank for Ruble Transactions
14:00 GMT 17.05.2022
Russian Supreme Court Will Consider Whether "Azov" is a Terrorist Organisation on 26 May
13:50 GMT 17.05.2022
IAEA to Send New Expert Mission to Chernobyl NPP in Coming Weeks - Chief
The International Atomic Energy Agency (IAEA) will send a new expert mission to the Chernobyl nuclear power plant (NPP) in Ukraine in the coming weeks for nuclear safety assistance, Director General Rafael Grossi said on Tuesday.

In late April, IAEA inspectors and technicians, as part of an expert mission headed by Grossi, visited the Chernobyl NPP to restore the transmission and recover data from the monitoring systems.

The NPP continues to operate as usual, with radiation levels assessed as normal, according to the IAEA and the Russian Foreign Ministry.
13:48 GMT 17.05.2022
Moldova Needs to Make Political Decision Whether to Stay Member of CIS - Parliament Speaker
13:40 GMT 17.05.2022
Kremlin Says Countries Paying for Russian Gas in Rubles Not Suffering Financially
The countries that have switched to the new payment arrangement for Russian gas are not experiencing any added difficulties or financial losses, Kremlin spokesman Dmitry Peskov said on Tuesday.

"For those [countries] buying [gas] under this scheme, there are no additional difficulties or losses, nothing of kind," Peskov told reporters.

Earlier in the day, European Commission Chief Spokesman Eric Mamer said that the European Union has not changed its recommendations on that payments for Russian gas must be made in the currency specified in the contract.

In March, Russian President Vladimir Putin instructed the government and Gazprom to switch gas payments to rubles for countries that have imposed sanctions on Russia for starting the operation in Ukraine.
13:40 GMT 17.05.2022
Buses Presumably With Ukrainian Prisoners of War Leaving Mariupol
A convoy of buses, escorted by armoured vehicles, presumably with Ukrainian prisoners of war from Azovstal, are leaving Mariupol on Tuesday, a Sputnik correspondent reported.

Earlier in the day, the Russian Defence Ministry said that 265 "militants" from Azovstal put down their weapons, including 51 fighters in critical condition. The injured prisoners of war were sent to a medical facility controlled by the Donetsk People’s Republic.