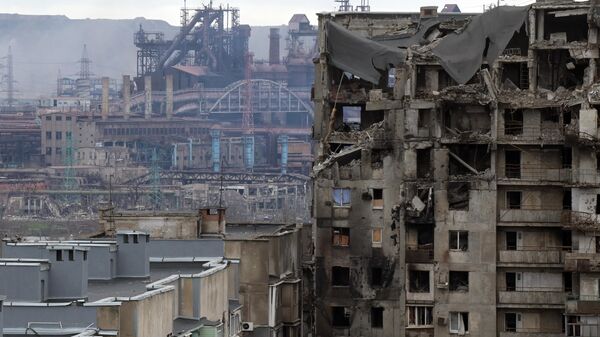 Russia launched the military operation in Ukraine in February, after the Donetsk and Lugansk Republics asked Moscow for help amid intensyfying Ukrainian attacks. President Vladimir Putin stressed that the eight-year-long war which has been waged by Kiev in Donbass amounts to genocide, noting that Ukrainian war criminals must be held accountable.
Russian forces and Donbass militias are advancing amid the special op, pressing Ukrainian troops away from their positions.
In the meantime, Sweden and Finland have announced that they will be joining NATO, citing the special operation as a major shift in the European security situation. Moscow has already warned them that the move won't boost their security, and will inevitably lead to the militarisation of northern Europe.
Follow Sputnik's live feed and Telegram channels to get the latest updates:
Sputnik News US — https://t.me/sputniknewsus
Sputnik News India — https://t.me/sputniknewsindia
Table of contents
New firstOld first
19:41 GMT 16.05.2022
White House Says Aware of Turkey's Questions on Finland, Sweden Joining NATO, But US Confident Alliance Will Reach Consensus
"I know there was a question about what the Turkish government said about Finland and Sweden. The Secretary [Antony Blinken] spoke to this during his press conference in Berlin ... So what he said is we are confident we will reach consensus as an alliance on an entry process should they decide to apply," Jean-Pierre told a press briefing.
19:22 GMT 16.05.2022
Group of Russian Reporters Came Under Fire in Donbass, Incident Did Not Result in Casualties - LPR People’s Militia
"While working in the village of Novozvanovka, the film crew of the press service of the LPR people’s militia department, VGTRK [All-Russia State Television and Radio Broadcasting Company] correspondent Nikolai Dolgachev and Izvestia [newspaper] correspondent Alexei Poltoranin came under mortar fire from Ukrainian security forces. Luckily no one was hurt," Filiponenko said.
19:10 GMT 16.05.2022
Cavusoglu Holds Conversation With NATO Cheif - Source
"Today, Turkish Foreign Minister Mevlut Cavusoglu held a phone conversation with the NATO secretary general," the source said.

Earlier in the day, Turkish President Recep Tayyip Erdogan said that Ankara can not say "yes" to the membership of Finland and Sweden in NATO.
18:54 GMT 16.05.2022
UK Says Finland, Sweden Should Integrate Into NATO ASAP
"The UK strongly supports applications for NATO membership from Finland and Sweden," Foreign Secretary Liz Truss said in a statement, adding "their accession will strengthen the collective security of Europe".

Russia's Special Operation in Ukraine
Russian MoD: Toxic Cloud Moving Towards Kramatorsk After Ukraine's Special Forces Provocation
18:36 GMT 16.05.2022
Ukrainian Militants Deployed Artillery at a Health Centre in LPR's Severodonetsk, Kicked Out Staff and Patients - Russian MoD
18:35 GMT 16.05.2022
Russian MoD: Ukraine's Security Service, Militants Take Odessa Residents in Unknown Direction After Detecting Calls to Russian Numbers on Their Phones
17:56 GMT 16.05.2022
EU Foreign Ministers Fail to Agree on Sixth Package of Sanctions Against Russia - Borrell
MOSCOW (Sputnik) - The EU foreign ministers have failed to agree on the sixth package of sanctions against Russia, EU foreign policy chief Josep Borrell said on Monday.
"Unfortunately today it has not been possible to reach an agreement to finalize the 6th sanction package the issue will go to the COREPER and ambassadors will continue discussing. We are with the same difficulties with unanimity on the oil ban," Borrell told a briefing.
The EU top diplomat also said that the Union "to provide an additional 500 million from the European peace facility for weapons deliveries" to Ukraine, adding that the EU’s assistance now reaches two billion euros.
17:46 GMT 16.05.2022

World
'No Offence': Turkey Can't Say 'Yes' to Finland, Sweden Joining NATO, Erdogan Says
17:01 GMT 16.05.2022
Bloomberg: Italy's Oil And Gas Company ENI Ready to Abide by Russia's Requirements to Set Up a Gazprombank Account for Ruble Transactions
16:56 GMT 16.05.2022
Moscow: Politicians' NATO Accession Decision is Not in the Interest of Swedish People
16:52 GMT 16.05.2022
Russia's Response to Stockholm Joining NATO WIll Depend on Prospects of Alliance Deploying Offensive Weapons on Swedish Soil, MFA Says
16:50 GMT 16.05.2022
NATO Membership Will Lead to Sweden Losing Its Sovereignty in Decision-Making, Russian Foreign Ministry Warns
16:15 GMT 16.05.2022
DPR's People's Militia: Republic's Armed Forces Have Eliminated 22 Ukrainian Nationalists Over the Past Day
16:14 GMT 16.05.2022
Yellen Discusses Economic Impacts of Ukraine Conflict With Polish Officials
WASHINGTON (Sputnik) - US Treasury Secretary Janet Yellen met with Polish officials in Warsaw and discussed the energy situation in Europe as well as the macroeconomic effects of the Ukraine conflict, the US Treasury said in a press release on Monday.
“The Secretary expressed her gratitude at the generosity Poland has shown in welcoming refugees fleeing Russia’s illegal war on Ukraine,” the release said. “The Secretary also discussed the energy situation in Europe and investment screening.”
During her stay in Warsaw from May 14-16, Yellen has me with Polish Prime Minister Mateusz Morawiecki, Minister Magdalena Rzeczkowska and Narodowy Bank Polski Governor Adam Glapinski, the release said.
“The Secretary discussed the macroeconomic impacts of Russia’s war against Ukraine as well as efforts by Narodowy Bank Polski to facilitate currency conversion for refugees,” the release said.
Yellen emphasized to Polish officials the need to move forward on the global agreement on international tax reform, the release also said.
“One hundred and thirty seven countries representing nearly 95% of the world’s GDP agreed last fall on a deal that will stabilize our tax systems, provide resources to invest in security and respond to crises like Covid-19, and ensure corporations fairly share the burden of financing government,” the release added.
Newsfeed
0
Access to the chat has been blocked for violating the rules . You will be able to participate again through:∞. If you do not agree with the blocking, please use the feedback form
The discussion is closed. You can participate in the discussion within 24 hours after the publication of the article.
To participate in the discussion
log in or register
loader
Chats
Заголовок открываемого материала