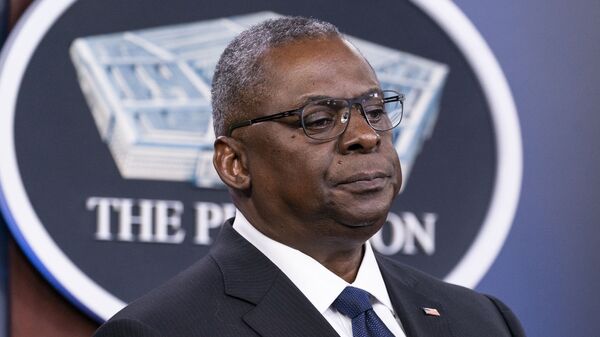 Moscow launched the military operation in Ukraine on 24 February to defend the republics of Donetsk and Lugansk, which were suffering from intensifying attacks by Ukraine. President Vladimir Putin slammed Kiev for 8-year-long war in Donbass, calling it a genocide, and said that Russia's goal is the "demilitarisation and denazification" of Ukraine.
Russian forces and Donbass militias continue to advance amid the special operation in Ukraine. In total, since the beginning of the op, the Russian military has destroyed 164 Ukrainian warplanes, 827 drones, 366 rocket launchers, 304 air defence missile systems, and 3,022 tanks and other armoured vehicles.
Follow Sputnik's live feed and Telegram channels to get the latest updates:
Sputnik News US — https://t.me/sputniknewsus
Sputnik News India — https://t.me/sputniknewsindia
New firstOld first
03:32 GMT 14.05.2022
US, ASEAN Supporting UN Secretary-General's Peace-Seeking Efforts on Ukraine - Statement
The United States and the ASEAN nations have voiced support for the efforts of UN Secretary-General Antonio Guterres aimed at looking for a peaceful settlement of the Ukrainian crisis, the joint statement of the US-ASEAN Summit said.

"With regard to Ukraine, as for all nations, we continue to reaffirm our respect for sovereignty, political independence, and territorial integrity. We reiterate our call for compliance with the UN Charter and international law. We underline the importance of an immediate cessation of hostilities and creating an enabling environment for peaceful resolution. We support the efforts of the UN Secretary-General in the search for a peaceful solution," the statement said.

The parties also pointed out the need to facilitate rapid, safe and unhindered access to humanitarian assistance for those in need in Ukraine, as well as to ensure the protection of civilians, humanitarian personnel and vulnerable people.
23:10 GMT 13.05.2022
Zelensky: 37 Foreign Embassies Resumed Work in Kiev
Ukrainian President Volodymyr Zelensky revealed in an Telegram post that 37 foreign embassies had resumed their work in the Ukrainian capital of Kiev.

In February, many embassies suspended the work in Ukraine amid the threat of a Russian military offensive.
23:09 GMT 13.05.2022
Sounds of Explosions Sounding Over Russia's Belgorod, Surrounding Areas
Sounds of explosions are sounding over the city of Belgorod and the region, a Sputnik correspondent reported.

Local residents are also reporting about the loud sounds. There are no comments of the regional officials.

The Russian territories bordering Ukraine regularly come under attacks from Ukraine since the withdrawal of the Russian troops from the Kiev and Chernihiv regions in early April.
21:33 GMT 13.05.2022
Senator Paul Says Sympathetic to Ukraine, But Does Not Want to Bankrupt US With Funding
US Senator Rand Paul said after delaying the passage of a $40 billion aid package for Ukraine that although he is sympathetic to the country’s situation, he does not want to bankrupt the United States by overspending on foreign causes.

Passing the legislation would bring the total amount sent by the US to Ukraine over the last two months to nearly $54 billion. That level of spending on a foreign issue while taxpayers struggle to buy gas, groceries and baby formula is a "slap in the face," Paul said on Thursday via Twitter.

"During our visit to Kiev, I also had a meeting with Zelenskyy. He thanked Turkey for its constructive and balanced attitude, as well as support that Turkey provides to Ukraine. Zelensky stressed that they have full confidence in Turkey. In addition, Zelensky confirmed that he is ready to meet with Putin through the mediation of our president", Turkish presidential spokesman Ibrahim Kalin said in an interview with Turkiye Gazetesi newspaper.

"We are following the process. But we do not have a positive opinion on this matter. Because before that, there was a mistake in connection with Greece. You are aware of Greece's behavior in the alliance towards Turkey ... The Scandinavian countries have a habit of showing 'hospitality' to terrorists, letting them into parliament. Therefore, we cannot look positively at this yet", Turkish President Recep Tayyip Erdogan told reporters.

"Gazprom supplies natural gas to various consumers in Europe, including countries that are NATO members. And Gazprom has repeatedly demonstrated its reliability as a company that supplies energy resources to the European continent. Therefore, most likely, these reports are just another media hoax", Kremlin spokesman Dmitry Peskov told reporters.