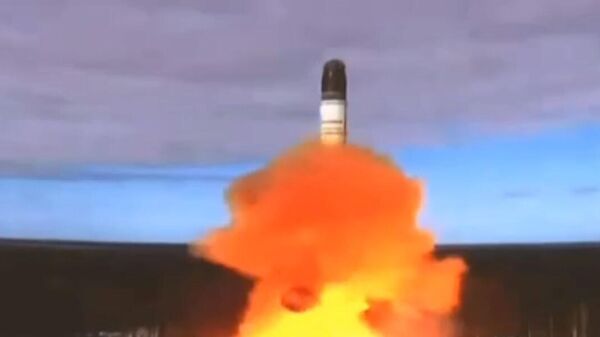 Being updated
The legislation allows lend-lease deals for military equipment to Ukraine and other Eastern European countries to enhance weapons transfers. It comes amid efforts by Democrats to support the Kiev regime against Russia, including a new $33 billion request from Biden to Congress for military, economic and humanitarian support for Kiev.
US lawmaker Thomas Massie, one of the few members of Congress to vote against the legislation, warned following its passage that the recent bill allows the transfer of "virtually any weapon of war" other than nuclear arms.
Russia has repeatedly warned the West against pumping Ukraine with weapons, fearing they might fell into the hands of terrorists. At the same time, the Russian MoD said the flow of weapons will not affect the outcome of Russia's special operation.
Moscow launched a military operation in Ukraine with the stated goal of putting an end to war crimes committed by Ukrainian troops against civilians during an eight-year offensive against Donbass. According to President Putin, Donbass people have been subjected to the "genocide" by "Kiev's regime", which was "hijacked" by nationalists and neo-Nazis after the West-backed coup in 2014.
Follow Sputnik's live feed to find out more!
New firstOld first
03:36 GMT 11.05.2022
Russia Has Supplied Nearly 19,000 Tonnes of Humanitarian Aid to Ukraine - Defense Ministry
Since March 2, Russia has delivered nearly 19,000 tonnes of humanitarian cargoes to Ukraine, head of the Russian National Defense Control Center, Col. Gen. Mikhail Mizintsev, who also leads Russia's humanitarian response coordination headquarters, said.

Another source said the meeting is scheduled for 10 a.m. (2 p.m. GMT).
23:22 GMT 10.05.2022
US House Panel Chair Says More Sanctions Coming Against Russia in Coordination With Allies

US House Panel Chair Says More Sanctions Coming Against Russia in Coordination With Allies
21:41 GMT 10.05.2022
Biden’s Ukraine Ambassador Nominee Says Does Not Know When US Embassy Will Return to Kiev
President Joe Biden’s candidate for US Ambassador to Ukraine, Bridget Brink, during her confirmation hearing said she does not know when the US embassy will return to Kiev.

Last week, US Charge d'Affaires Kristina Kvien said the Biden administration hopes conditions will permit the embassy, temporarily shut down and moved to Lviv in mid-February, to return to Kiev by end of May.

"I do not know exactly how fast we will be able to do this process, but I know we are trying to do it as fast as possible," Brink said during a hearing at the Senate Foreign Affairs Committee on Tuesday.

US Secretary of State Antony Blinken informed Ukrainian Foreign Minister Dmytro Kuleba in a Sunday phone call of a recent visit to Kiev by US diplomats ahead of the US embassy reopening, according to the State Department.

Brink expressed the hope to start her work, if confirmed, in the Ukrainian capital and noted that Kvien is laying the groundwork to return the embassy.

"We will have to look at the security situation, but I have a great confidence in our security experts, including those on the ground, to give us advice that allows us to continue to advance our strategic interests, which means being present to work with the Ukrainians, work with other embassies, and also coordinate back with Washington from Kiev," she said.
20:17 GMT 10.05.2022
US-Led Contact Group on Ukraine Will Likely Meet Virtually in May – Pentagon
The US-led contact group on Ukraine is likely to meet in May by video, Pentagon spokesman John Kirby said on Tuesday.

"[UK] Minister [of Defense Ben] Wallace was at the Ramstein contact group. Now we're calling it the Contact Group, that consultative meeting back in Germany. There will be another one this month, most likely a virtual meeting. The [US] Secretary [of Defense Lloyd Austin] wants to do this monthly. So, the one in May will most likely be virtual," Kirby told a press briefing.
19:52 GMT 10.05.2022
Ukraine Crisis Will Be Resolved Diplomatically But US Sees No Russian Interest - Psaki
The United States believes that the situation between Ukraine and Russia will be resolved diplomatically but currently sees no Russian interest in peace talks, White House Press Secretary Jen Psaki said on Tuesday.

"We certainly believe that this will be resolved through a diplomatic process and a diplomatic solution… We don’t see a sign from the Russians that they are open to or eager to engage in those discussions," Psaki said during a press briefing when asked whether the US believes peace talks with a ceasefire in place could be productive.
16:50 GMT 10.05.2022
Pentagon: US Sees 'No Indication' That Russia Uses Hypersonic Weapons in Odessa
The United States sees no indication that Russia has used hypersonic weapons in Odessa, a US Defense Department official told reporters on Tuesday.

Slovak Opposition Leader Says Zelensky ‘Lies on a Daily Basis’, Boycotts Ukrainian Prez’s Speech
14:46 GMT 10.05.2022
US Does Not See Reason to be Concerned About Russian Tactical Nuclear Weapons Use, Senior Intel Official Says
14:31 GMT 10.05.2022
US Intel Chief Sees No Viable Negotiating Path Between Russia, Ukraine in Short Term
The United States sees no feasible diplomatic path between Russia and Ukraine in the near future, Director of National Intelligence Avril Haines said on Tuesday.
"As both Russia and Ukraine believe they can continue to make progress militarily, we do not see a viable negotiating path forward at least in the short term," Haines told a Senate hearing.
The US intelligence community believes that Russian President Vladimir Putin is preparing for a prolonged conflict in Ukraine during which Moscow still intends to achieve goals beyond Donbass, she said.
According to Haines, the conflict between Russia and Ukraine is developing into a war of attrition, which means that the next few months could see an unpredictable and escalatory trajectory.
14:17 GMT 10.05.2022

"The next step will be [supply of] highly modern tanks and howitzers, which means that we can use them to defend against drones ... Germany and the Netherlands will be able to supply these howitzers together, because one country cannot supply everything, because Germany has a shortage [of howitzers]. But Germany will provide seven [howitzers], and we will now begin the training [of Ukrainian personnel] that is necessary for this," Baerbock said during a press conference in Kiev.

The military equipment will be delivered before the end of the training of the Ukrainian military, Baerbock added.
14:14 GMT 10.05.2022
Emotional Moment of Veterans' Meeting With DPR Head in Mariupol - Video
14:11 GMT 10.05.2022
DPR Soldier Recalls Assisting in Evacuation of Civilians in Mariupol - Video
13:24 GMT 10.05.2022
German Foreign Minister: There Will Be no Lifting of Sanctions Against Russia Behind Ukraine's Back
Sanctions against Russia cannot be lifted even if they have an impact on Germany, German Foreign Minister Annalena Baerbock also said.
Newsfeed
0
Access to the chat has been blocked for violating the rules . You will be able to participate again through:∞. If you do not agree with the blocking, please use the feedback form
The discussion is closed. You can participate in the discussion within 24 hours after the publication of the article.
To participate in the discussion
log in or register
loader
Chats
Заголовок открываемого материала