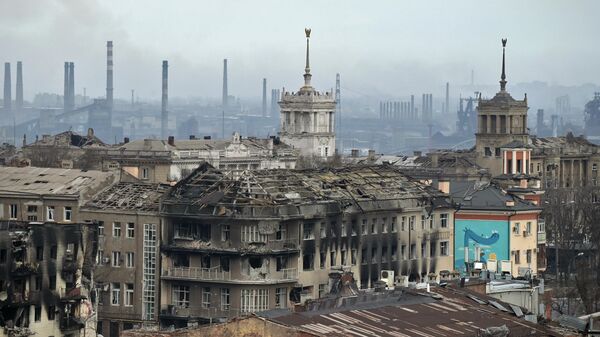 LIVE UPDATES: Most of Mercenaries Surrounded on 'Azovstal' Are From European Countries - MoD

Being updated
All those who lay down arms at Azovstal and surrender on Sunday are guaranted life, the Russian Ministry of Defence said.
Earlier in the week, 1,160 Ukrainian soldiers, including 176 officers, of the 36th Marine Brigade surrendered in Mariupol. The Russian Defence Ministry said it was ready to allow all Ukrainian troops to withdraw through humanitarian corridors and promised to spare Ukrainian nationalists who agree to lay down arms. The Ukrainian side declined the offer.
Mariupol, a coastal city in the breakaway Donetsk People's Republic (DPR) with a population of 450,000, went under the control of Ukrainian troops during the 2014 offensive. On 7 March, a senior DPR military said that Russian and DPR forces have surrounded the city and are clearing it of Ukrainian troops, including the neo-Nazi Azov battalion.
Russia launched a military operation last month with the stated goal of putting an end to war crimes committed by Ukrainian troops against civilians during an eight-year offensive against Donbass.
Follow Sputnik's live feed to find out more!
New firstOld first
03:57 GMT 18.04.2022
Russia Is Up Against What Seems Like “the Whole World,” Chechen Ramzan Kadyrov Says

According to the news outlet, Kiev made the request during the first days of the Russian special operation but was rebuffed by the Moldovan leadership, which explained that it did not want to irritate Moscow as it could view that move as a violation of the principle of neutrality.

The Moldovan Defence Ministry is said to have six MiG-29 fighter jets, which are operational but have not been deployed in a long time. Chisinau has been trying to sell them for a while but to no avail.
18:24 GMT 17.04.2022
Russian MoD: Pentagon Planned to Infect Entire Region With Typhus and Hepatitis

Plague and Typhus: What Have American Scientists Been Up to in Ukraine’s Biolabs?
18:24 GMT 17.04.2022
Iraq is in Search For More Destinations For Its Oil Exports

A group of Ukrainian nationalist militants tore down the monument earlier on Sunday, the committee said.

"The Main Investigative Department of the Investigative Committee of Russia has initiated a criminal case over the demolition of the monument to Marshal G.K. Zhukov on the grounds of a crime under part 4 of Article 354.1 of the Russian Criminal Code (insult to the memory of the defenders of the homeland committed by a group of people in collusion)," the committee said in a statement.

In 2015, the Ukrainian parliament approved a set of laws as part of the new government's "decommunization" policy. It banned the use of Soviet symbols and gave a green light to the demolition of monuments commemorating Communist figures and renaming streets and settlements named after them.
14:56 GMT 17.04.2022
Ukrainian Militants in Mariupol Refuse to Surrender, Hostilities in the City Continue, Sputnik Correspondent Says
14:49 GMT 17.04.2022
24 Houses Destroyed by Ukrainian Shelling in DPR Over the Past Day, Officials Say
Ukrainian troops have fired 331 shells toward the civilian infrastructure of the Donetsk People's Republic (DPR) during the past day, having partially or completely destroyed 24 houses, DPR People's Militia spokesman Eduard Basurin said on Sunday.

"A total of 331 projectiles over the past day, mainly calibers 152mm and 122mm and Grad [multiple rocket launchers]. They targeted Donetsk, Yasinovataya, Gorlovka, and Panteleimonovka. More than 24 houses have been destroyed either partially or completely," Basurin said.

He added that none of the targeted areas stationed the military, opining that Ukrainian troops appear to be deliberately targeting civilian areas.
14:24 GMT 17.04.2022
Couples in Ukraine Now Can Get Married Within One Day, Official Says

"During combat operations, 1,035 foreign mercenaries were destroyed by the Russian armed forces. Another 912 mercenaries refused to participate in the hostilities and fled the country," Konashenkov said in a morning briefing.

"We have already said earlier that radio conversations between militants in Mariupol are being carried out in six foreign languages. In the event of further resistance, all of them [foreign mercenaries] will be destroyed," the spokesman said.

In total, Kiev has attracted 6,824 foreign mercenaries from 63 countries to Ukraine since the start of Russia's special military operation, Konashenkov said.

The largest group of 1,717 mercenaries came from Poland, 1,500 people arrived from the United States, Canada, and Romania, 300 from each of the United Kingdom and Georgia, and 193 from Turkish-controlled areas of Syria. The vast majority of foreign mercenaries are fighting in the cities of Kiev, Kharkov, Odessa, Nikolaev and Mariupol, the spokesman added.

"As a result of hostilities, the number of mercenaries is steadily declining, and today it amounts to 4,877 people," he stressed.

"During the night, an ammunition factory near the village of Brovary, Kiev region, was destroyed with high-precision air-launched missiles," Konashenkov said.
08:13 GMT 17.04.2022
Russian Forces Free Hostages Held By Nazis in Mosque in Mariupol, Kill 29 Militants, Including Foreign Mercenaries - MoD

Situation in Ukraine
Kiev Orders Azov Nazis to Shoot Those Surrendering at Azovstal, Russian MoD Says
07:58 GMT 17.04.2022
Majority of Foreign Mercenaries Surrounded on Territory of 'Azovstal' Are From European Countries - Russian MoD
06:24 GMT 17.04.2022
Zelensky Wants to 'Gain Time' While Turning to NATO for Assistance, Russian Lawmaker Says
Volodymyr Zelensky, who recently expressed his alleged readiness to discuss the Crimean issue and Ukraine's refusal to join NATO with Russia, actually wants to buy time, while turning to NATO for military assistance, the chairman of the Russian parliament's lower house, Vyacheslav Volodin, said on Sunday.
Volodin recalled that Zelenskyy had said the same before the talks in Turkey, when Russian forces had almost reached Kiev. According to the Russian lawmaker, Moscow reduced its activity in the area, withdrew its troops, after which a staged provocation in Bucha took place and Kiev refused to honor its obligations.
"Today, the same scenario is being proposed. The reason [for it] is obvious. He [Zelenskyy] wants to gain time while simultaneously turning to NATO for military assistance," Volodin said on Telegram.
Volodin noted that Ukrainian forces have already lost 23,367 people. In addition,1,464 Ukrainian soldiers surrendered during the liberation of Mariupol on Saturday.
Volodin also stressed that Zelenskyy must withdraw Ukrainian troops from the Donetsk and Luhansk people's republics, recognize Russia's sovereignty over Crimea and make a commitment not to join NATO if he really cares about Ukrainian citizens.