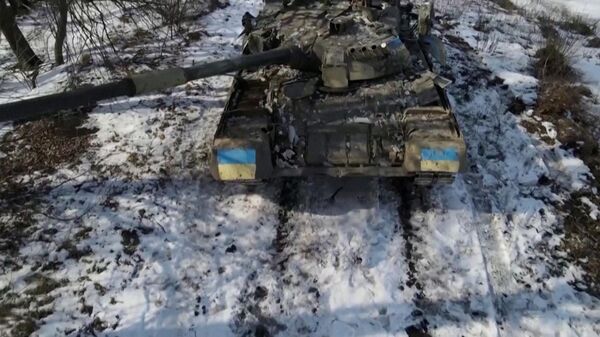 In late February, Russia began a special military operation to demilitarise and "de-Nazify" Ukraine, after Kiev's forces intensified attacks against the Donetsk and Lugansk People's Republics (DPR and LPR), forcing mass evacuations of civilians.
Ukrainian forces have shelled the settlements of the Lugansk People's Republic eight times over the past 24 hours, firing 64 large-calibre projectiles, the LPR representative office at the Joint Center for Control and Coordination of the Ceasefire (JCCC) said on Saturday.
As a result of the shelling, a total of six residential buildings, a hospital, and a kindergarten were damaged.
On 24 February, Russia launched a military operation in Ukraine after the newly-recognised republics of Donetsk and Lugansk appealed for help in defending themselves against Ukrainian troops. In response, the West and its allies rolled out a comprehensive sanctions campaign against Moscow, which includes airspace closures and restrictive measures targeting numerous Russian officials and entities, media and financial institutions.
Follow Sputnik's live feed and Telegram channels to get the latest updates:
Sputnik News US — https://t.me/sputniknewsus
Sputnik News India — https://t.me/sputniknewsindia
New firstOld first
20:27 GMT 16.04.2022
Zelensky Says More Than One Meeting With Putin Will Happen Before Agreement Reached
"I do not think that it will take just one meeting. I do not think you can meet just once and agree on everything because there are a lot of issues," Zelenskyy said in an interview with Ukrainian media, adding that the issues of Donbas and Crimea remain moot.
19:08 GMT 16.04.2022

Medvedchuk's Wife Asks Putin to Help Free Her Husband in Prisoner Swap With Ukraine
16:28 GMT 16.04.2022
Zelensky: 'Elimination' of Ukrainian Troops in Mariupol Will Doom Talks With Russia
Ukraine will break off negotiations with Russia if Ukrainian troops in the city of Mariupol are eliminated, Ukrainian President Volodymyr Zelensky said.

Earlier in the week, 1,160 Ukrainian soldiers, including 176 officers, of the 36th Marine Brigade surrendered in Mariupol. The Russian Defence Ministry said it was ready to allow all Ukrainian troops to withdraw through humanitarian corridors and promised to spare Ukrainian nationalists who agree to lay down arms. The Ukrainian side declined the offer.

"Mariupol is, perhaps, like ten Borodyankas and I would like to say that elimination of our boys will put an end to all talks," Zelenskyy said, as quoted by Ukrainian news website Strana.ua.

Mariupol, a coastal city in the breakaway Donetsk People's Republic (DPR) with a population of 450,000, went under the control of Ukrainian troops during the 2014 offensive. On 7 March, a senior DPR military said that Russian and DPR forces have surrounded the city and are clearing it of Ukrainian troops, including the neo-Nazi Azov battalion.
16:18 GMT 16.04.2022

Situation in Ukraine
Ukrainian Opposition Politician Medvedchuk Placed Under Arrest Without Possibility of Bail: Report
16:14 GMT 16.04.2022
Lebanon Holds Car Parade in Support of Russia - Video
16:05 GMT 16.04.2022
Plane With Russian Diplomats Declared Personae Non Gratae in France is on Its Way to Moscow, Embassy Says
16:04 GMT 16.04.2022
L’Occitane Announces Closure of Retail, Online Stores in Russia
French skin care brand L'Occitane reversed its stance and announced the closure of all of its stores and online sales in Russia in the light of the special military operation in Ukraine.

On Thursday, the company told the BBC that it will not cease operations in Russia for fear that its employees will face "retaliation".

"Given the enormous human suffering being caused by escalating military action in Ukraine and to protect our employees worldwide from potential public aggression, we have decided to close our own stores and e-commerce websites in Russia," the company said in a press release published on Friday.

According to the company's 2021 annual report, it has over 100 retail shops located in Moscow, Saint Petersburg, Kazan and Yekaterinburg.
15:32 GMT 16.04.2022
Aftermath of Ukrainian Forces' Shelling of Zaporozhye Region Territories - Video
15:29 GMT 16.04.2022
Ukrainian Forces Shell Two Cities in Zaporozhye Region, Leaving One Person Dead, Local Authorities Say
Ukrainian troops shelled the towns of Vasylievka and Tokmak in the Zaporozhye region on Thursday, killing at least one person and injuring five, as well as destroying houses and schools, local authorities said.

"On April 14, 2022, our city Vasylievka was under another shelling. People suffered as a result. A civilian woman died. Five civilians are injured," Deputy Mayor Denis Kalinin said, adding that both private and public property suffered damage, such as schools where shrapnel landed.

Sputnik has obtained a video showing the site of the shelling, which shows traces of a 9M27K rocket from the Uragan multiple rocket launcher system.

"Of course, these events baffle us. We, the city council, are doing everything to help people to at least protect communal property, [and] restore it if possible, bury or help with transport and burial of the dead, provide medical assistance through our hospital's personnel," Kalinin added.
14:45 GMT 16.04.2022
Ukrainian PM Says Kiev Plans to Nationalise All Russian Assets

"It takes time for sanctions to hit. So far, only a relatively short period of time has passed, so we have not yet seen the desired effect. But we still have ways of tightening sanctions even further, for example, by boycotting oil and gas," the minister told German newspaper Handelsblatt.

He accused European countries of "financing" Russia's operation in Ukraine by continuing to buy fuel from it.
13:00 GMT 16.04.2022
Germany Reports 70% Drop in Ukrainian Refugee Arrivals by Train
The number of Ukrainian refugees coming to Germany by train each day has decreased by nearly 70%, German Minister for Transport Volker Wissing said on Saturday.

"The number of people fleeing to Germany by train has fallen significantly compared to the peak at the beginning of war – from around 8,200 to the current 2,500 people per day. We continue to keep the logistics and transport structures in place, however, because … [we] can experience an increase in the number of refugees at any time. We must expect further escalation and be prepared. People who are in need in Ukraine should be able to find refuge in Germany," Wissing told the RND news agency.

Germany "cannot and will not" reject any refugees from Ukraine, he added.

According to Germany’s Interior Ministry, almost 300,000 refugees from Ukraine have been registered in the country as of 1 April, with most of them travelling by train. The ministry noted that the actual number is likely higher as not all Ukrainian refugees have registered with the police.

Ukrainian citizens holding a biometric passport are allowed to legally stay in EU member states for 90 days without contacting the migration authorities.
12:46 GMT 16.04.2022
Five Victims of Attack by Ukrainian Forces in Bryansk Region Remain in Hospital
12:28 GMT 16.04.2022
Italian Ports Will Be Closed to Russian Ships Starting 17 April, Reports Say
Italy will close its ports to Russian ships starting this Sunday, including those that have changed their flag since February 24, Italian media reported.

Last week, the European Union agreed on the fifth package of anti-Russian sanctions over Ukraine, which include a ban on access to EU ports for ships under the Russian flag. Romania also banned Russian-flagged vessels from entering Romanian ports — except for humanitarian emergency purposes and energy transit — starting Sunday.

According to newspaper La Stampa, citing the country's port authority, the vessels that are currently staying at Italian ports will have to leave immediately after concluding their commercial activities.