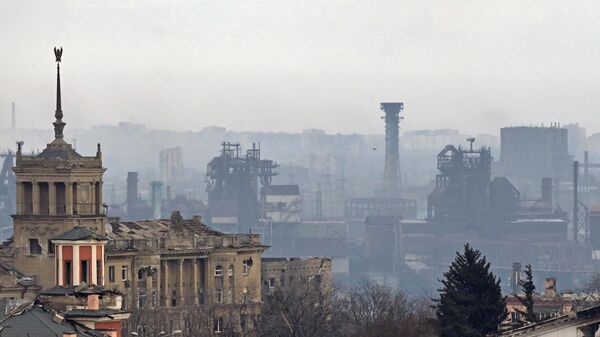 Russia launched its special military operation in Ukraine on 24 February to stop the eight-year-long war waged by Kiev in Donbass, which has claimed thousands of lives.
Since the beginning of the op, Russian forces have eliminated at least 130 Ukrainian warplanes, over 2,000 tanks and other armoured vehicles, 99 helicopters, 441 drones, and 241 rocket launchers.
Russian forces and Donbass militias continue to advance, as they seized control of the port of Mariupol, and are encircling the last remaining Ukrainian radicals in the city.
Follow Sputnik's live feed and Telegram channels to get the latest updates:
Sputnik News US — https://t.me/sputniknewsus
Sputnik News India — https://t.me/sputniknewsindia
New firstOld first
04:11 GMT 13.04.2022

On Monday, Ukrainian battalion Azov, with commonly recognized neo-Nazi ideology, accused the Russian forces of having used a poisonous chemical substance against its fighters in Mariupol, which allegedly resulted in the militants and even some civilians feeling sick.

“I myself am from the Levoberezhny District, but this is the first time I hear about this information. I haven’t seen or heard anything like that," a resident of Mariupol, who was evacuated from the city, told Sputnik.

Another resident of Mariupol, who is staying in the city, said: “At the moment, I can only say one thing. We have been here since [April] 10. Today I talked with my mother, who is currently in the Kalius region, and she said that everything is fine, she feels fine, no such incidents and there were no gases, there was nothing like that."

White House spokeswoman Jen Psaki said Tuesday the United States cannot confirm the allegations that a chemical weapon was used in Mariupol.
00:48 GMT 13.04.2022
US Tried to Avoid Exposing Sources in Revealing Russian Moves - Intelligence Chief
The US intelligence community was able to monitor the movement of Russian military forces before and during the Ukraine conflict in real time but sought not to present its findings in ways that shaped policy or inadvertently exposed or compromised its sources, Director of National Intelligence (DNI) Avril Haines said.

"One concern I had was that we [would] not be perceived as a tool of policy," Haines told a forum at the Meridian International Center in Washington, DC on Tuesday. “We are cautious ... It is a long term thing to see whether or not you actually burn your sources and methods through disclosures."

Haines emphasized that the 18 major US intelligence services continually analyzed their own conclusions and public statements to try and ensure that means of intelligence collection and key sources were not accidentally revealed and endangered.

The Biden administration is currently determining what mix of military equipment to send to Ukraine, the report said on Tuesday.
18:45 GMT 12.04.2022
Russian Envoy: Canada’s Alberta Province Cuts Ties With 3 Russian Regions Over Ukraine
Canada's Alberta province has severed its ties with three Russian regions over the Ukraine crisis, Russian Ambassador in Ottawa Oleg Stepanov told Sputnik.
When asked about the current state of inter-regional ties between the two countries, Stepanov stated, "Moscow notes their freezing on the Canadian side in the current conditions."
"The province of Alberta has taken the most radical step," he added. "I received a cc of the letter from Alberta premier Jason Kenney in which he states that Alberta is unilaterally terminating its ties with three Russian regions."
These are the Yamalo-Nenets Autonomous Area, the Tyumen region and the Khanty-Mansiysk Area.
"They present it as a gesture of protest against the Russian special military operation. At the same time, we must understand that in fact such a gesture by the authorities is due to the fact that a powerful Ukrainian diaspora lives in the province, which, in fact, is pushing the authorities to make decisions that have nothing to do with the crisis in Ukraine," Stepanov said.
17:34 GMT 12.04.2022
White House Says Cannot Confirm Reports That Chemical Weapon Was Used in Mariupol
The United States cannot confirm the allegations that a chemical weapon was used in Mariupol, Ukraine, White House spokesperson Jen Psaki said on Tuesday.
"Nothing to confirm at this time," Psaki told reporters during a press gaggle aboard Air Force One.
Psaki added that the United States does not have anyone on the ground in Ukraine to participate in an investigation into the allegations.
16:59 GMT 12.04.2022
Downing Street: Johnson, Biden Discuss Accelerating Military Assistance to Ukraine
15:23 GMT 12.04.2022
German President Confirms Kiev Refused to Host Him
German President Frank-Walter Steinmeier on Tuesday confirmed that he was ready to visit Kiev alongside his colleagues from Poland and the Baltic states but the Ukrainian side has said that his visit was undesirable.

"Polish President Andrzej Duda, few days ago, suggested that we, together with the presidents of Estonia, Latvia and Lithuania, make a trip to Kiev to send a strong signal of common European solidarity with Ukraine there. I was ready for this, but ... I must take note that in Kiev it was undesirable," Steinmeier told reporters in Warsaw.

Earlier in the day, Bild reported that Ukrainian President Volodymyr Zelensky has refused to host Steinmeier in Kiev due to his "close connections" to Russia in recent years.
14:58 GMT 12.04.2022
US to Finish Delivering $100Mln Worth of Javelins to Ukraine by Mid-April, Senior Defense Official Says
14:31 GMT 12.04.2022
US Cannot Confirm Use of Chemical Agents in Mariupol, Senior Defense Official Says
The United States cannot confirm the use of chemical agents in the Ukrainian city of Mariupol, a senior defense official said on Tuesday.
"We cannot confirm the reports that were out on social media yesterday that chemical agents were used in Mariupol ... We cannot confirm the use of chemical agents at this time. We're still evaluating," the official told a briefing.
14:31 GMT 12.04.2022
Putin Says Ukraine Diverted From Istanbul Agreements, Talks in Dead-End
Moscow-Kiev talks are in dead-end as Ukraine has diverted from agreements that were made during negotiations in Istanbul, Russian President Vladimir Putin said on Monday.
"Most importantly, the Ukrainian side has moved away from its agreements in Istanbul. Now the requirement of security is one thing. And the issues of regulating relations regarding Crimea, Sevastopol and Donbas are taken out of the scope of these agreements. This is pretty much a return to the dead-end for them and for all of us," Putin said after his meeting with Belarusian President Alexander Lukashenko.
Putin added that he was informed about changes made by Kiev on Monday morning.
"I am not aware of these changes. But such inconsistency on fundamental issues creates certain difficulties in reaching final agreements acceptable to everyone on the negotiating track. And until this happens, the military operation will continue until it is fully completed and the tasks that were set at the beginning of this operation are solved," Putin said.
13:12 GMT 12.04.2022
Putin Says Lukashenko Handed Him Documents That Expose Bucha Fake

"It became possible to start a direct dialogue with the Ukrainian side largely thanks to the personal efforts of Belarusian President [Alexander Lukashenko]. We believe that the Belarusian platform is quite suitable for further contacts", Putin said.

12:11 GMT 12.04.2022
Ukraine's Zelensky Calls on EU to Start Timed Abandonment of Russian Energy Supplies
Ukrainian President Volodymyr Zelenskyy on Tuesday urged the European Union to set a concrete timeframe for abandoning Russia's energy supplies, saying it is the only way for the bloc to ensure a "truly strong and truly consolidated" response.
In his address to the Lithuanian parliament, Zelenskyy said that the EU is negotiating a sixth package of sanctions against Russia, though it is still unclear whether Russian oil will fall under the sanctions.

"We must do everything necessary now – in the sixth package of sanctions. The European Union can do that. And it must do that. It must include oil there… Specific deadlines must finally be set for each EU state in order to really abandon or at least significantly limit the consumption of Russian gas, oil", Zelenskyy said.

He noted that some EU member states are reluctant to abandon Russian energy, while hundreds of European companies and banks still operate in the Russian market and show "outright contempt" for demands to stop financing Russia. All this, Zelenskyy said, indicates that "there can be no certainty that Europe has a common will to stop Russia's war".

"Every effort must be made to ensure that Europe's response to Russian aggression is truly strong and truly consolidated," he concluded.

WATCH: Russian Ship Uses Missile to Destroy Ukrainian Bayraktar Drone
10:49 GMT 12.04.2022
US Not Planning to Create Military Base in Czech Republic - Reports
The United States does not plan to create a military base in the Czech Republic, as proposed by Czech Defense Minister Jana Cernochova in connection with the events in Ukraine, the Pravo newspaper reported on Tuesday, citing US diplomatic sources.
On Saturday, Cernochova expressed Prague's readiness to let the US armed forces use Czech military bases, following the example of neighboring Slovakia. According to the Czech defense minister, she intends to raise the issue during her visit to Washington from 15-18 April.
The Pravo newspaper reported that Cernochova's statement surprised not only many Czech politicians, including some partners in the ruling coalition, but, most importantly, the administration of US President Joe Biden.
According to information from US diplomatic sources, the creation of a full-fledged US base in the Czech Republic is not on the agenda, the newspaper reported.
10:46 GMT 12.04.2022
Source: Secret NATO Group for Monitoring Russian Navy Starts Working in Odessa
A clandestine NATO group has started working in Odessa to monitor Russian Navy ships in the Black Sea, a source told Sputnik on Tuesday, adding that it includes employees of a Romanian private military company.

"In a suburb of Odessa, there is a secret base of the NATO monitoring group with equipment that allows to determine the exact coordinates of any ship in the Black Sea within a radius of up to 200 kilometres [124 miles]. The main specialists are employees of the Romanian private military company Nordstarsupport Group", the source said.

10:46 GMT 12.04.2022
Slovakia May Allow Ukrainian Troops to Train on Its Territory - Prime Minister
Bratislava is considering the possibility of allowing Ukrainian troops to undergo training on the Slovak territory, Prime Minister Eduard Heger said.
"We're having this discussion," Heger told Politico on Monday when asked whether Slovakia would allow Ukrainian military to exercise on its territory.
The prime minister also said that Slovakia is "in a very intensive discussion" with its partners concerning its own airspace defense in the event it transfers Soviet-developed Mikoyan MiG-29 supermaneuverable fighter aircraft to Ukraine.
"After that we can consider speaking about this equipment in regard with Ukraine as well," Heger added.
08:43 GMT 12.04.2022
No Doubt Aims, Objectives of Special Op in Ukraine Will Be Implemented - Putin