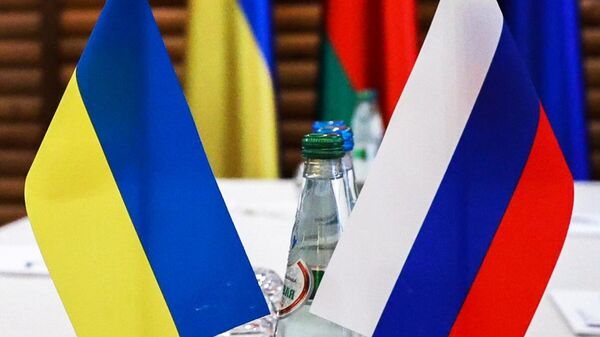 LIVE UPDATES: New Round of Russia-Ukraine Talks Will Be Held in Person on 29-30 March

According to the Russian military, drifting mines "will reach Romanian territorial waters in four days and Bulgarian waters in 10 days." At least two naval mines were found and defused by Turks at the northern entrance of the Bosporus Strait on Saturday, causing disruption to maritime traffic.
On February 24, Russia launched a special military operation in Ukraine after the republics of Donetsk and Luhansk appealed for help in defending themselves against Kiev aggrrssion. In response to Russia’s operation, Western countries have rolled out a comprehensive sanctions campaign against Moscow.
This week, US President Joe Biden traveled to Europe to reassure his allies spooked by soaring commodity prices after sanctions on Russia and the fighting in Ukraine sent ripples through the global energy market and caused wheat prices to hit decade highs.
Follow Sputnik's live feed and Telegram channels to get the latest updates:
Sputnik News US — https://t.me/sputniknewsus
Sputnik News India — https://t.me/sputniknewsindia
New firstOld first
17:52 GMT 27.03.2022
Putin, Erdogan Agree to Hold Next Talks Between Russia & Ukraine in Istanbul, Turkish Presidency Says
The next meeting of negotiating delegations of Russia and Ukraine will be held in Istanbul, as such an agreement was reached during the talks between the presidents of Turkey and Russia, Turkish President Tayyip Erdogan's office said in a statement.
"During telephone talks, Turkish President Tayyip Erdogan and Russian President Vladimir Putin agreed that the next meeting of the negotiating teams of Russia and Ukraine will be held in Istanbul," the office said.
16:10 GMT 27.03.2022
UK Announces Halt in R&D Cooperation With Russia
The United Kingdom said on Sunday that it was pausing publicly funded research and innovation collaboration with Russia over its operation in Ukraine.
"We will not fund any new collaborative projects with Russia through our research and innovation organisations," Science Minister George Freeman said in a statement.
The ministry has also suspended government-to-government dialogue through its science and innovation network team in Russia, including collaborative science projects.
Freeman argued that the sanctions were aimed at the Russian state and scientists with links to the Kremlin, but not those with "benign" research interests.
15:12 GMT 27.03.2022
New Round of Russia-Ukraine Talks to Take Place on 29-30 March
A new round of peace talks between Russia and Ukraine will be held in person on March 29-30, the head of the Russian delegation at the talks, presidential aide Vladimir Medinsky, said on Sunday.

"Today, another round of negotiations with Ukraine in the format of a video call took place. As a result, it was decided to meet in person on March 29-30," Medinsky wrote on Telegram.

After the start of the Russian military operation on February 24, Moscow and Kiev held three rounds of negotiations in Belarus. Now negotiations are held on a daily basis via a video link.
14:18 GMT 27.03.2022
UK Defence Secretary: Giving Ukraine British Tanks 'Wouldn't Work'
Providing Ukraine with British tanks "wouldn't work," UK Defense Secretary Ben Wallace said in an interview with The Mail on Sunday newspaper, adding that the focus should be on repairing Russian and Soviet equipment, which demands less training for Ukrainian military.
“One of the biggest challenges is that the more you go up in sophistication of weapons systems, the more training you require to use them, which is why the real focus of effort has to be helping the Ukrainians either refurbish or locate Russian or Soviet equipment that is already in their inventory. Just providing British tanks wouldn’t really work,” Wallace said.
Britain's Starstreak man-portable air defense systems are ready to be deployed in Ukraine, and Ukrainian troops have already been trained to use them, Wallace added.
According to the defense minister, the United Kingdom is "doing more than pretty much anyone else" to help Ukraine.
13:50 GMT 27.03.2022
Poll: 52% of French Citizens Believe at Least One Argument Justifying Russian Special Op in Ukraine

"Over 70 tonnes of humanitarian cargo for the civilian population of Ukraine were delivered by the military transport aviation of the Russian aerospace forces on three Il-76 aircraft. The cargo arrived in the Belarusian city of Gomel from the city of Surgut of the Khanty-Mansi Autonomous Okrug of Russia, then it will be delivered to Ukrainian settlements as part of humanitarian convoys", the MoD said in a statement.

07:11 GMT 27.03.2022
Footage From Mariupol Airport, Liberated From Ukrainian Troops
07:05 GMT 27.03.2022
MoD: Russia Uses Precision Weapons to Eliminate Major Ukrainian Fuel Base Near Lvov
06:51 GMT 27.03.2022
At Least 20 Civilians Injured by Ukrainian Shelling in DPR Over Past Day, Authorities Say
02:19 GMT 27.03.2022
Poland Not Abandoning Idea of Sending NATO Peacekeepers to Ukraine - Russian Ambassador
MOSCOW (Sputnik) - Warsaw has not fully turned away from the idea of sending NATO peacekeepers to Ukraine, despite US opposition, Russian Ambassador to Poland Sergei Andreev said.
"As for the actual idea of ​​a peacekeeping operation, everything appears to have been stated clearly, the Americans said that they would not send their troops. NATO Secretary General [Jens Stoltenberg] said that such an operation is not considered. However, Polish officials say that they are not abandoning this idea, they will think and observe," Andreev said on the Soloviev Live YouTube show on Saturday.
Last week, Polish Deputy Prime Minister Jaroslaw Kaczynski proposed sending a NATO peacekeeping mission to Ukraine. The German government said that it opposes sending any NATO missions to Ukraine as this is a "red line."