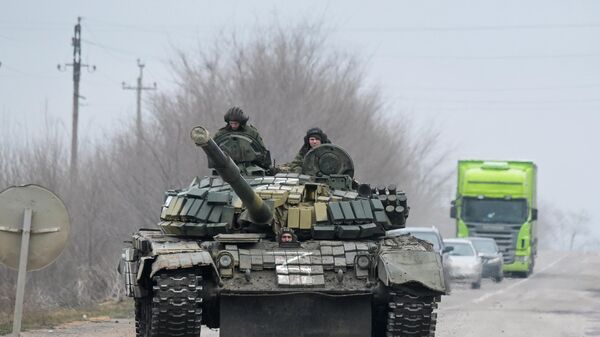 "We have directed Patriot missile systems to Poland this week and today I can announce that we have delivered those Patriot systems to Poland, we do this as a reminder and demonstration of our commitment to Poland," she said during a visit to Warsaw.

12:14 GMT 10.03.2022
Zelensky Signs Law on Forced Seizure of Russian Property in Ukraine, Reports Say
Volodymyr Zelensky has signed a law on forced seizure of property that belonged to Russia or its residents in Ukraine, the Stana.ua news agency reported on Thursday.
Zelensky also said that he is ready to do everything to confiscate property of "Russian propagandists".
12:00 GMT 10.03.2022
Gas Prices in Berlin to Rise 26%, the Company Gasag Says
11:29 GMT 10.03.2022
Turkey Ready to Host Next Russia-Ukraine Meeting, Foreign Minister Cavusoglu Says
11:23 GMT 10.03.2022
Kremlin: Putin, Macron and Scholz Discuss Situation in Ukraine During Phone Talks
11:06 GMT 10.03.2022
UK Working on Providing Ukraine With Night Anti-Aircraft Weapons, Armed Forces Under-Secretary Says
The UK armed forces minister, James Heappey, on Thursday said that the United Kingdom was looking at "the practicality and the feasibility" of providing Ukraine with anti-aircraft weapons capable of shooting down Russian planes on night combat missions.

"The next step is to provide the Ukrainians with an anti-aircraft capability that works at night," Heappey told Sky News broadcaster.

Situation in Ukraine
EU Has Reached Limit of Its Capabilities to Impose Financial Sanctions on Russia, Borrell Says
08:43 GMT 10.03.2022
Lavrov's and Kuleba's Pressers to Be Held in Separate Rooms - Sputnik Correspondent
Newsfeed
0
Access to the chat has been blocked for violating the rules . You will be able to participate again through:∞. If you do not agree with the blocking, please use the feedback form
The discussion is closed. You can participate in the discussion within 24 hours after the publication of the article.
To participate in the discussion
log in or register
loader
Chats
Заголовок открываемого материала