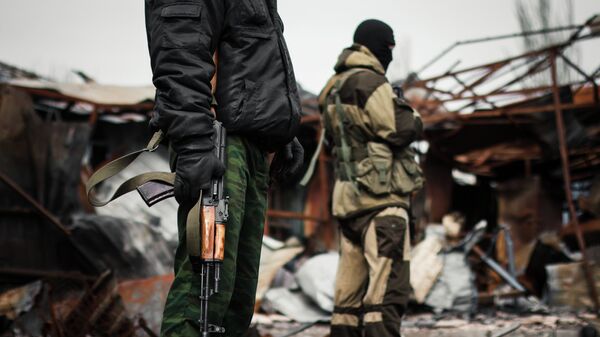 The situation around Ukraine has escalated over the past several days, with Ukrainian forces shelling the Donbass republics, prompting mass evacuations of civilians. After an appeal by both the DPR and LPR, Russia recognised them as independent nations and demanded that Kiev stop the attacks.
On Thursday, Russia launched a special military operation in Ukraine in order to stop the war in Donbass.
Russian forces used precision weapons to neutralise military infrastructure, including air bases and air defences. At the same time, the Russian Ministry of Defence stressed there is no threat to the civilian population in Ukraine.
Follow Sputnik's Live Feed to Find out More!
Table of contents
New firstOld first
20:05 GMT 25.02.2022
Russia MFA: Ukrainian Side Refused to Negotiate, Offered to Return to This Issue on Saturday
19:54 GMT 25.02.2022
State Dept Says 'Doors Are Open' If Sweden or Finland Are Willing to Join NATO
19:34 GMT 25.02.2022
UK Imposes Sanctions Against Russian President Putin, Foreign Minister Lavrov - Foreign Office
According to the sanctions list published by the UK Foreign Office, the reason for imposing sanctions against Putin was that he was responsible for the policy of the Russian government and for the country's armed forces, and "in February 2022, PUTIN ordered Russian military forces to launch an invasion of Ukraine."
19:34 GMT 25.02.2022
Biden to Impose Sanctions on Putin as Soon as Friday - US Media
19:31 GMT 25.02.2022
Sputnik V Manufacturing Inspections Subject to UN Security Clearance - WHO
GENEVA (Sputnik) - Inspections by World Health Organization experts to assess the production of Russian vaccine Sputnik V, scheduled for March, will depend on the permission of the UN security service and the development of the situation in the region, the WHO press service told Sputnik amid Russia's military operation to demilitarize Ukraine.

The WHO previously said that the inspections needed to certify Sputnik V for emergency use were due in March. After that, according to WHO practice, it would be necessary to study the received data and make a decision on the certification of the vaccine.

Russia submitted primary documents for certification of the drug in late 2020. The WHO has not yet approved Sputnik V.
19:17 GMT 25.02.2022
Turkish Foreign Minister Says Ankara Ready to Host a Putin-Zelensky Meeting
19:11 GMT 25.02.2022
UN Secretary-General Will Continue to Work Cooperatively & Fully With Russia - Spokesman
“The Secretary-General works cooperatively and fully with every member state in the Security Council, every member state in the UN, and we'll continue to do so,” Dujarric said during a press briefing.
18:59 GMT 25.02.2022
Meta Refused to Follow Russian Authorities' Requirements Regarding Russian Media Accounts
18:56 GMT 25.02.2022
Serbia Will Not Impose Sanctions Against Russia, President Vucic Says
18:38 GMT 25.02.2022

Russia
What Did Putin Mean by 'Denazification' of Ukraine and Why is It so Important?
18:23 GMT 25.02.2022
NATO Deploys Response Units to 'Bolster Defences' on Eastern Flank
18:20 GMT 25.02.2022
OECD Terminates Process of Russia's Accession to Organisation
"Firstly, Council has decided to formally terminate the accession process with Russia, which was postponed in 2014. The Council has also asked the Secretary-General to take the necessary steps to close the OECD Moscow office and to stop all invitations to Russia at Ministerial levels and in the bodies where listed as Invitee," the organization said in a statement.

The OECD’s External Relations Committee was asked to stop Russia's participation in other committees of the organization.

The OECD Council also asked the organization's secretary general to take measures to stop all projects funded by voluntary donations from Russia.

The statement of the organization notes that the issues of cooperation between the OECD and Russia and additional measures to support Ukraine will be considered over the next days and weeks.
18:14 GMT 25.02.2022
'Nothing is Off the Table': Borrell Says 'Maybe' Switching Russia Off SWIFT Could be Adopted in Coming Days
18:09 GMT 25.02.2022
Borrell Says EU Has Listed Putin and Lavrov Among New Russia Sanctions
18:02 GMT 25.02.2022
Zelensky Says He Discussed 'Anti-War Coalition' With Biden
18:00 GMT 25.02.2022
Downing Street: UK to Impose Sanctions on Putin and Lavrov Soon
"The Prime Minister urged leaders to take immediate action against SWIFT to inflict maximum pain on President Putin and his regime. The UK would introduce sanctions against President Putin and Foreign Minister Sergey Lavrov imminently, on top of the sanctions package the UK announced yesterday," Johnson’s office said in the readout of his address to NATO leaders.
17:59 GMT 25.02.2022
UK Prime Minister Urges World Leaders to Take Immediate Action Against SWIFT 'to Inflict Maximum Pain' on Russia
17:57 GMT 25.02.2022
Explosion Rocks Donetsk, Sputnik Correspondent Says
17:48 GMT 25.02.2022
Russia Does Not Intend to Stay in Ukraine, Will Withdraw Troops After Special Op, Envoy to EU Says
17:21 GMT 25.02.2022
IAEA Says Radiation in Chernobyl Area Low, Sees No Threat
Newsfeed
0
Access to the chat has been blocked for violating the rules . You will be able to participate again through:∞. If you do not agree with the blocking, please use the feedback form
The discussion is closed. You can participate in the discussion within 24 hours after the publication of the article.
To participate in the discussion
log in or register
loader
Chats
Заголовок открываемого материала