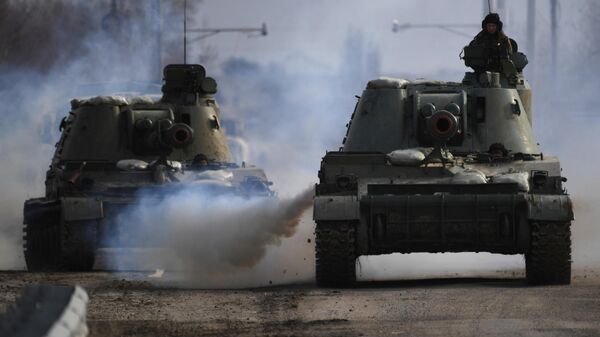 Ukraine Spec Op LIVE UPDATES: Biden Says US Forces Will Not Engage in Conflict With Russia

In the early hours on Thursday, Russia launched a special operation after the breakaway republics of Donetsk and Lugansk requested assistance to defend themselves from ongoing attacks by Ukrainian troops.
The Russian Defence Ministry said the operation is targeting the military infrastructure of Ukraine and the civilian population is not in danger. Moscow says it has no plans to occupy Ukraine.
Also on Thursday, US President Joe Biden authorised new sanctions against Russia, targeting critical industries and several individuals. He also said that the deployment of additional US forces to Germany to reinforce NATO's presence on its eastern flank has been authorised.
In a recent video address, President Putin said, "the events today are not about the desire to harm the interests of Ukraine and Ukrainians. This is about defending Russia itself from those who hold Ukraine hostage and try to use it against our country and its people. Let me repeat myself, our actions are self-defence against the threats to us and the bigger problem than the one we are facing now".
Follow Sputnik's live feed to find out more.
New firstOld first
03:52 GMT 25.02.2022
Russian Aviation Authority Says Reserves Right to Respond to UK Following Sanctions Against Aeroflot
03:47 GMT 25.02.2022
France Will Provide Ukraine With Military Equipment, Over $330Mln Financial Aid - Macron
"France will be putting an extra 300 million euro as part of that extra effort I’ve just mentioned and we are prepared to go on supply material for civilian part of the population and for support of military," Macron said after the extraordinary EU Summit.

"I had a direct and frank exchange of views with President [Vladimir] Putin. It was fairly quick. President [Volodymyr] Zelensky asked early on in order, firstly, to ask for an early cessation of hostilities, and, secondly, to offer to have a conversation with Zelensky, who asked for this, but was not able to reach president Putin," the French president added.
01:57 GMT 25.02.2022
Macron Says France Will Impose Its Own Sanctions on Russia in Addition to EU Ones - Reports
01:39 GMT 25.02.2022
EU Makes 'Political Decision' to Impose Additional Sanctions on Russia - President of European Council
"We took a political decision to add an additional package of mass sanction which will be painful for the Russian regime," Michel said after the extraordinary EU Summit.

“We also discussed support for the Ukrainian people and state to mobilize financing capacity and humanitarian support,” he added.
01:38 GMT 25.02.2022
Taiwan to Join International Sanctions Against Russia Over Special Op in Ukraine, de-facto Foreign Ministry Says
"The government deeply regrets that Russia, instead of resolving disputes through peaceful diplomatic negotiations, has chosen to use force and intimidation in bullying others. In order to compel Russia to halt its military aggression against Ukraine, and to restart peaceful dialogue among all parties concerned as soon as possible, the government of the Republic of China (Taiwan) announces it will join international economic sanctions against Russia," the ministry said in a statement.
01:26 GMT 25.02.2022
Canada Slams Sanctions on Russian Lawmakers Who Voted For Recognition of DPR, LPR, As Well as Putin's 'Inner Circle'
"The new amendments impose restrictions on 31 individuals who are key members of President Putin’s inner circle, close contacts and family members of some individuals already sanctioned by Canada, and 27 key financial institutions. Additionally, the measures impose restrictions against 4 Ukrainian individuals who are pro-Russian agents of disinformation," the Canadian Foreign Ministry said in a statement on late Thursday.
"In addition, the amendments will include 351 members of the Russian State Duma who voted for the decision to recognize the independence of the so-called DNR and LNR [DPR and LPR], as well as new prohibitions in the area of sovereign debt, specifically prohibiting direct or indirect dealings with three central Russian entities, and impose sanctions on two significant financial entities. It is now prohibited for any person in Canada and any Canadian outside Canada to directly or indirectly transact in, provide financing for or otherwise deal in new Russian debt," the statement noted.
Ottawa also targeted with sanctions the Russian Central bank, many other Russian banks - including Sberbank, VTB and Alfa-Bank - the Russian Finance Ministry and other entities.
00:33 GMT 25.02.2022
Anonymous Group Declares 'Cyberwar' on Russia, Claims Responsibility for Cyberattack on RT
MOSCOW (Sputnik) - The Anonymous hacking group has declared a cyberwar on Russia over the latter's military operation in Ukraine, as well as claimed responsibility for a cyberattack on the RT broadcaster.

"The Anonymous collective is officially in cyber war against the Russian government. #Anonymous #Ukraine," Anonymous tweeted.

"The #Anonymous collective has taken down the website of the #Russian propaganda station RT News," the group added.
23:30 GMT 24.02.2022
Japan Imposes New Sanctions Against Russia Over Special Op in Ukraine
"In addition to the sanctions announced on February 23, our country is intensifying them in the following way: freezing capitals, ban on issuing visas to Russian citizens and entities, freezing assets of financial organizations, ban on the goods that may be used for military purposes," Prime Minister Fumio Kishidasaid at a press conference.
23:08 GMT 24.02.2022
US Sees No Increased Threat of Russia Using Nuclear Weapons - White House
23:06 GMT 24.02.2022
Russian Banks Hit by Sanctions Have High Margin of Stability - Central Bank
MOSCOW (Sputnik) - The Russian banks, which are hit by the international sanctions over the special operation in Ukraine, have a high margin of stability, the Central Bank said on Friday.

"The banks are retaining the high margin of stability and have a significant potential to develop business via loaning the Russian economy," the Central Bank said.

"All operations of banks in rubles will be carried out, and the relevant services will be provided to all customers as usual. All customers' funds in foreign currencies are also retained and can be withdrawn in the account currency. The Bank of Russia is ready to support banks with funds in rubles and foreign currency," the bank added.
23:05 GMT 24.02.2022
Russia Making Massive Efforts to De-Escalate Tensions With US But Facing Refusals & Threats From Washington - Ambassador Antonov
23:02 GMT 24.02.2022
Russia Will Respond to Expulsion of Russian Diplomat From US - Ambassador Antonov
22:44 GMT 24.02.2022
Latest US Sanctions Not Designed to Cause Any Disruption to Current Flow Of Energy From Russia to The World, White House Claims
22:24 GMT 24.02.2022
Zelensky Declares to Hold General Mobilization in Ukraine Within Next 90 Days
22:04 GMT 24.02.2022
EU Sanctions Against Russia Will Have Mid-Term Effect, Not Immediate One, German Minister Thinks
"The sanctions that are now being adopted, not right now, but in the mid-term, will have a sensitive impact on Russia, on the government officials. Restrictions on the banking business, no technology exports. This, unfortunately, will be felt by the Russian people, although they are not responsible for the decisions of [Russian President] Vladimir Putin," German Finance Minister Christian Lindner told the ARD broadcaster.

He added that the disconnection of Russia from the SWIFT international financial system was one of the options under the current consideration.
21:59 GMT 24.02.2022
US House Speaker Pelosi Says Wants to Provide Ukraine With $600 Million in Lethal Defense Weapons
21:21 GMT 24.02.2022
German Finance Minister Says Disconnecting Russia From SWIFT Is One of Options Under Consideration
20:57 GMT 24.02.2022
UK Working With Allies to Disconnect Russia From SWIFT, Will Not Rest Until Russian Economy Is Destroyed - Foreign Office

"We will not rest until Russia’s economy has been degraded and Ukraine’s sovereignty and territorial integrity restored," Foreign Secretary Liz Truss said on Thursday.

The ban also applies to the airspace within 100 miles of Ukraine’s borders, including the Russian cities of Moscow and Rostov, Belarus’ Minsk and Chisinau, Moldova, the ministry said.