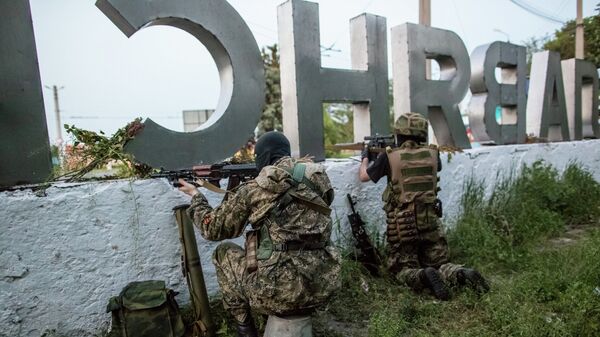 "We need to be tough in our response, so the sanctions that we will propose will be large-scale, they will be aimed at ‘strangling’ the economic functioning of Russia - banking, financial measures, measures against technology transfer, industrial, export measures," Le Drian told the TF1 broadcaster.

19:55 GMT 24.02.2022
ISS May Witness Uncontrolled Deorbit to Europe or US If Sanctions Hit Space Cooperation With Russia - Russian Space Chief
19:42 GMT 24.02.2022
US Imposes Sanctions on 24 Belarusian Individuals, Entities - Treasury Department
"As part of the United States’ serious and expansive response to Russia’s further invasion of Ukraine, the US Department of the Treasury’s Office of Foreign Assets Control (OFAC) is sanctioning 24 Belarusian individuals and entities due to Belarus’s support for, and facilitation of, the invasion," the Treasury Department said in a press release.
19:25 GMT 24.02.2022
Biden Says Has No Plans to Speak With Putin at This Point

"I have no plans to talk with Putin," Biden said during a press conference, as he announced new sanctions on Moscow.

"Today, within hours of Russia unleashing its assault, NATO came together and authorized an activation response plan. This will enable NATO’s high-readiness forces to deploy when and where they’re needed to protect our NATO allies on the eastern boundaries of Europe. And now I’m authorizing additional US force capabilities to deploy to Germany as part of NATO’s response, including some US-based forces that the Department of Defense placed on standby weeks ago," Biden said.

"Our forces are not and will not be engaged in a conflict with Russia in Ukraine. Our forces are not going to Europe to fight in Ukraine, but to defend our NATO allies and reassure those allies in the east," President Joe Biden said on Thursday during a press briefing.

"This morning, I met with my G7 counterparts to discuss President [Vladimir] Putin’s unjustified attack on Ukraine and we agreed to move forward on devastating packages of sanctions and other economic measures to hold Russia to account", Biden said via Twitter.
17:29 GMT 24.02.2022
Biden's Remarks on Ukraine Moved to 18:30 GMT, White House Says
Newsfeed
0
Access to the chat has been blocked for violating the rules . You will be able to participate again through:∞. If you do not agree with the blocking, please use the feedback form
The discussion is closed. You can participate in the discussion within 24 hours after the publication of the article.
To participate in the discussion
log in or register
loader
Chats
Заголовок открываемого материала