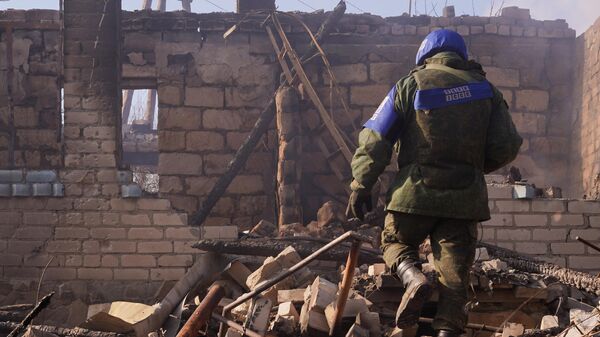 The self-proclaimed Donetsk and Lugansk People's Republics (DPR and LPR) announced the evacuation of their citizens to Russia on 18 February amid an escalation on the contact line between Ukraine and the DPR and LPR, as Kiev's forces intensified shelling of the Donbass region.
Kiev's forces continued shelling the territories of the self-proclaimed people's republics of Lugansk and Donetsk (LPR and DPR) on Monday, according to statements made by the breakaway republics' missions to the Joint Centre for Control and Coordination on the ceasefire regime (JCCC).
The shelling comes against the backdrop of the ongoing evacuation of Donbass civilians to Russia which started on 18 February amid fears of an attack by Ukrainian forces.
Around 61,000 residents of the LPR and DPR have crossed the border into Russia as part of the evacuation amid the escalation in eastern Ukraine.
Follow Sputnik's live feed to find out more.
New firstOld first
03:40 GMT 22.02.2022
France Urges Russia to Review Recognition of DPR, LPR - Envoy to UN
UNITED NATIONS (Sputnik) - France believes that Russia needs to follow up its words about readiness for dialogue in the situation around Ukraine with deeds, reviewing the decision to recognize the Donetsk and Lugansk people's republics (DPR and LPR), France's Permanent Representative to the UN Nicolas de Rivière said.

"We call on Russia to back up with deeds its words that it prefers the path of dialogue by canceling the decision on the recognition [of the DPR and LPR]. We, in coordination with European partners, are preparing targeted sanctions against those who made this illegal decision," de Riviere said at a meeting of the UN Security Council on Ukraine.
03:38 GMT 22.02.2022
China Calls for Diplomatic Efforts to Ease Tensions Around Ukraine
MOSCOW (Sputnik) - China’s Ambassador to the United Nations Zhang Jun on Monday urged all parties involved in tensions in Ukraine to continue dialogue and seek for diplomatic solution.

"All parties concerned must exercise restraint and avoid any action that may fuel tensions. We welcome and encourage every effort to diplomatic solution and call on all parties concerned to continue dialogue and consultation and seek reasonable solutions to address each other’s concerns on the basis of equality and mutual respect," Jun said at an emergency meeting of the UN Security Council.
03:18 GMT 22.02.2022
Russian Envoy to UN: Recognition of DPR, LPR Independence Does Not Change Parties to Minsk Agreement
Vassily Nebenzia, who serves as the Russian envoy to the United Nations and currently chairs the group, remarked at a late emergency meeting that Russia made the decision to act on the Donbas conflict as part of a larger effort to prevent any further hostilities.
The official added that under Ukrainian President Zelenskyy, Kiev returned to a militant rhetoric intent on fully destroying the Minsk agreement, of which UNSC colleagues are quick to “bury.”
Nebenzia further underscored that Russia is wholly open to diplomatic efforts, but that it is not willing to allow a bloodbath in the region. Additionally, the Russian envoy reiterated the Minsk agreement hasn’t been followed through with, and that suggestions Russia is responsible for the current standings is untrue as the nation is not part of the deal.
02:58 GMT 22.02.2022
US, German, French Leaders Vow to Respond to Russia's DPR, LPR Recognition- German Cabinet
BERLIN (Sputnik) - The leaders of the United States, Germany and France have promised that Russia's recognition of the Donetsk and Lugansk people's republics (DPR and LPR) will not be left without a response, the German cabinet said following a telephone conversation between US President Joe Biden, German Chancellor Olaf Scholz and French President Emmanuel Macron.

"All three interlocutors agreed that this unilateral step by Russia is a clear violation of the Minsk agreements. Germany, France and the United States sharply condemned the decision of the Russian president. This step will not be left without a response," it said.

According to the statement, the US, German and French leaders vowed to do everything possible to prevent further escalation in Donbas.
02:53 GMT 22.02.2022
White House: US Will Impose 'New Sanctions' on Russia Tuesday in Response to 'Decision & Actions' in Donbas
02:44 GMT 22.02.2022
DPR, LPR Borders to Be Protected Jointly With Moscow - Russian State Duma
MOSCOW (Sputnik) - The protection of the people's republics of Donetsk and Lugansk(DPR, LPR) state borders will be carried out jointly with Moscow, draft agreements published by Russian State Duma on Tuesday read.
"The protection of the state border of the Lugansk People's Republic will be carried out by the joint efforts of the Contracting Parties based on the interests of their own security, as well as peace and stability. The Contracting Parties shall conclude a separate agreement on this matter," article 3 of the draft agreement on cooperation and mutual assistance with the LPR read.

The same formula was featured in the draft agreement between Russia and the DPR with both agreements concluded for a period of ten years.

According to agreements, the parties obliged to respect the integrity and inviolability of each other's borders with Russian taking effective measures to maintain and operate the financial and banking system of the republics.
02:21 GMT 22.02.2022
US Envoy to UN: Russian Recognition of Donbas Regions an 'Attack' on Ukraine's UN Membership Status
UNITED NATIONS (Sputnik) - Linda Thomas-Greenfield, US ambassador to the United Nations called Russia’s decision to recognize the Donetsk and Lugansk self-proclaimed republics as independent an attack on Ukraine’s status as a member state of the United Nations.
“It is an attack on Ukraine status as a UN member state. It violates a basic principle of international law, and it defies our charter. What is more, this move by President Putin is clearly the basis for Russia's attempt to create a pretext for a further invasion of Ukraine,” Thomas-Greenfield said at an emergency meeting of the UN Security Council she requested in response to Putin’s decision.

The US ambassador said she did not believe the troops would be deployed there on a peaceful mission, at one point suggesting that Putin "wants the world to travel back in time" to a "time when empires ruled the world.
“He has since announced that he will place Russian troops in these regions. He calls them peacekeepers. This is nonsense. We know what they really are,” she said.
The ambassador also took the opportunity to accuse Putin of destroying the Minsk agreements, saying that the Russian leader "has torn the Minsk agreement to shreds."

"We have been clear that we do not believe he will stop on that. In light of President Putin's latest actions, we must all stand up for the principles upon which this organization was founded," Thomas-Greenfield told the UN Security Council.

Russia has repeatedly accused Kiev of reneging on their commitments under the Minsk agreements while saying that Moscow itself was never a party to the accords but rather a mediator.
01:57 GMT 22.02.2022
State Department Orders Personnel in Lviv to 'Spend the Night in Poland'

State Dept. Personnel in Lvov to 'Spend the Night in Poland' Amid Heightened Tensions - Blinken
01:17 GMT 22.02.2022
EU to Decide on Imposing Sanctions Against Russia ‘Tomorrow, or Day After Tomorrow’- Rutte
PARIS (Sputnik) - The European Union will make a decision on introduction of sanctions package against Russia over Moscow’s recognition of the people's republics of Donetsk and Lugansk (DPR, LPR) "tomorrow, or the day after tomorrow," Dutch Prime Minister Mark Rutte said on Monday.
"This is a very serious fact… The European Union will decide tomorrow or the day after tomorrow on the imposition of a limited package of sanctions against the people behind this," Rutte said as aired by the Netherlands' national broadcaster RTL Nieuws.

“We are going to be looking very closely at what they [Russia] do over the coming hours and days, and our response will be measured according to their actions," the official said.
23:16 GMT 21.02.2022
US Reportedly Considering Relocation of All Remaining Diplomats in Ukraine to Poland
WASHINGTON (Sputnik) - The Biden administration is considering ordering the relocation of US diplomats, including the embassy staff, still remaining in Ukraine to Poland due to security concerns, Bloomberg reported citing sources.

The report said on Monday that American diplomats may return to Ukraine on Tuesday if there is no Russian invasion.

“The United States has asked for a meeting to be held tonight," the source said.
23:08 GMT 21.02.2022
US Would Not Consider Deployment of Russian Troops in Donbas as New Move - Official
WASHINGTON (Sputnik) - The United States would not consider the movement of Russian troops into the Donbas region to be a new step, a senior American administration official said.

"Russia has occupied these regions [Donbas] since 2014. It has been Russia's position that there are no Russian forces present in this part of the Donbas," the official told a conference call on Monday. "The reality as we pointed out on a number of occasions over these past years has been quite different. There have been Russian forces present in these areas throughout."
The official further indicated that Washington is open for engagements between the American and Russian presidents, while weighing certain preconditions for that.
22:40 GMT 21.02.2022
OSCE: 2,158 Ceasefire Violations Were Recorded in Donetsk Region on February 18-20
22:14 GMT 21.02.2022
White House: Biden Reaffirmed in Call With Zelenskyy US Commitment to Ukraine's 'Sovereignty and Territorial Integrity'
21:47 GMT 21.02.2022
US Secretary of State Vows 'Swift and Firm Response' Following Recognition of LPR, DPR

Kremlin recognition of the so-called “Donetsk and Luhansk People’s Republics” as “independent” requires a swift and firm response, and we will take appropriate steps in coordination with partners.

21:24 GMT 21.02.2022
Putin Orders Peacekeeping Mission in LPR, DPR - Decree
MOSCOW (Sputnik) - Russian President Vladimir Putin has ordered to ensure peace in the Donetsk and Lugansk people's republics (DPR and LPR) by means of Russia's Armed Forces, according to decrees published on the portal of legal information.
"In connection with the appeal by the head of the Lugansk People's Republic, the Russian Defense Ministry, prior to the conclusion of the treaty referred to in clause 3 of this decree, must ensure the implementation of peacekeeping functions by Russia's Armed Forces on the territory of the Lugansk People's Republic," according to clause 4 of the decree on the LPR. There is a similar clause in the decree on the DPR.

In addition, the president instructed the Russian Foreign Ministry to hold talks with the DPR and LPR on the establishment of diplomatic relations, friendship, cooperation and mutual assistance. Decrees recognizing the LPR and DPR as sovereign and independent states were published early on Tuesday.
21:11 GMT 21.02.2022
UK to Announce 'New' Anti-Russian Sanctions on Tuesday, Says British Foreign Secretary

Tomorrow we will be announcing new sanctions on Russia in response to their breach of international law and attack on Ukraine's sovereignty and territorial integrity.

Details of the conversation between the leaders have not yet been disclosed.