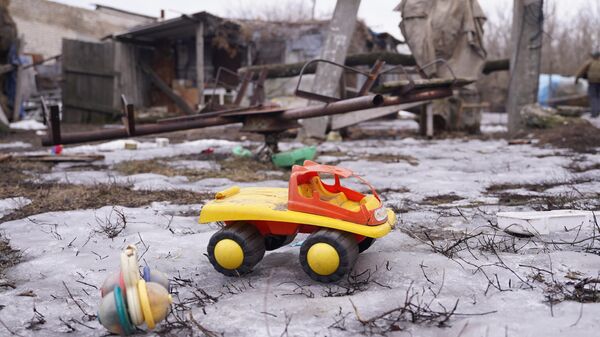 In violation of the Minsk Agreements, the Ukrainian army launched an attack against the self-proclaimed Donetsk and Luhansk People's Republics early on Thursday, with local authorities warning that Kiev could start a full-scale offensive at any moment.
Early on Saturday, the Ukrainian forces shelled the city of Dokuchaevsk in the self-proclaimed LPR, firing 40 grenades in total, the Joint Center for Control and Coordination said.
Amid the attacks, the authorities the DPR the LPR started the evacuation of civilians to Russia on Friday, fearing military aggression by the Ukrainian government.
The Russian Foreign Ministry said on Friday it is extremely concerned by the aggravation of the situation in Donbas and that civilians there are enduring suffering and risks and believes the shelling should stop.
Meanwhile, NATO is reportedly boosting the level of combat readiness of thousands of servicemen amid the ongoing tensions with Russia. According to German media, the NATO Response Force (NRF) must be ready to move to the conflict zone within seven days, instead of 30 as it was before.
Follow Sputnik's live feed to find out more.
New firstOld first
04:20 GMT 19.02.2022
Key Pumping Station in DPR Damaged in Shelling by Ukrainian Forces
The Vasilyevsky pumping station, which provides water to almost two million Donbass residents on both sides of the line of contact, has been damaged as a result of shelling by Ukrainian forces, DPR has announced. The village of Vasilyevka, where the pumping station is located, has been left without water, according to a DPR representative.
Earlier, the DPR representative office in the Joint Center for Control and Coordination on ceasefire (JCCC) said that Ukrainian forces had shelled the village of Vasilyevka in the self-proclaimed Donetsk republic, firing four 82-millimeter mortars.
02:18 GMT 19.02.2022
TikTok Blocks Account of RIA Novosti, Deletes Video Address of Head of Self-Proclaimed DPR

TikTok Blocks RIA Novosti's Account, Deletes Video of DPR Leader as Kiev Continues Shelling
01:18 GMT 19.02.2022
Ukrainian Army Shelled Self-Proclaimed LPR 31 Times Within Past 24 Hours - Official
LUHANSK, Ukraine (Sputnik) - The Ukrainian Armed Forces have shelled the self-proclaimed Luhansk People's Republic (LPR) 31 times within the past 24 hours, including with the use of heavy weapons, a spokesperson for the LPR mission to the Joint Center for Control and Coordination (JCCC) of the ceasefire regime in Donbas told reporters on Friday.

"Within the past 24 hours, the Ukrainian forces have violated the ceasefire regime 31 times," the spokesperson said.

He added that the Ukrainian army had used 122-millimeter artillery systems, large-caliber mortars and grenade launchers.
00:11 GMT 19.02.2022
DPR Reports Another Shelling of Dokuchaevsk
23:59 GMT 18.02.2022
About 25,000 Residents of Self-Proclaimed LPR Have Already Crossed Border With Russia, Emergencies Ministry Says
ROSTOV-ON-DON, Russia (Sputnik) - About 25,000 residents of the self-proclaimed Luhansk People's Republic (LPR) have already crossed the border with Russia, fleeing the escalation of violence in Donbas, a spokesperson for the LPR Emergencies Ministry said on Saturday.

On Friday, the LPR and the self-proclaimed Donetsk People's Republic (DPR) announced the evacuation of their citizens to Russia's Rostov Region over the escalation of tensions on the contact line.

"25,000 LPR citizens have crossed the border," the spokesperson told the Russian acting emergencies minister, adding that these are those who used personal cars.

He added that three more convoys with a total of 10,000 refugees are being currently formed.
23:30 GMT 18.02.2022
WATCH: Russian Emergencies Ministry Organizing Reception of Evacuees From Donbas
23:29 GMT 18.02.2022
LPR Reports 2 Shellings by Ukrainian Forces Early on Saturday
23:17 GMT 18.02.2022
DPR Authorities Report Another Attack on Dokuchaevsk by Ukrainian Army
23:09 GMT 18.02.2022
Footage Shows Fire That Broke Out at Luganskgaz Pipeline
23:07 GMT 18.02.2022
Russia Not Seeking War, Interested in Peaceful Settlement of Ukrainian Conflict, Always Called For Implementing Minsk Agreements - Senior Lawmaker
MOSCOW (Sputnik) - Russia is not seeking war and is interested in the peaceful settlement of the conflict in the eastern Ukrainian region of Donbas, Leonid Slutsky, the chairman of the State Duma International Affairs Committee, said on Saturday.

"Russia is not seeking war, Russia is interested in the peaceful settlement of the conflict in Ukraine more than any state on the Earth. Russia has always called for the implementation of the Minsk agreements, which have no alternatives," Slutsky wrote on his Telegram channel.

At the same time, he stressed that Russia would not let Kiev exterminate the Russian-speaking people in Donbas, adding that many of them are Russian citizens.
23:01 GMT 18.02.2022
OSCE Mission Says Registered 870 Ceasefire Violations in Donbas Over Past 24 Hours
MOSCOW, February 19 (Sputnik) - The Organization for Security and Co-operation in Europe's Special Monitoring Mission (OSCE SMM) said it had registered 222 ceasefire violations in Ukraine's Donetsk region, and 648 breaches of truce in the Luhansk region.

"We are deeply concerned about the reported significant increase in armed violence in eastern Ukraine. We reiterate the need to refrain from the use of force and de-escalate an already tense situation. Restraint, dialogue and responsibility are paramount," OSCE Chairman-in-Office and Foreign Minister of Poland, Zbigniew Rau, and OSCE Secretary General Helga Maria Schmid said in a statement.

"In recent days, the OSCE Special Monitoring to Ukraine (SMM) has observed a dramatic increase in kinetic activity along the contact line in eastern Ukraine, equal to the numbers of ceasefire violations reported before the July 2020 agreement on the Measures to strengthen the ceasefire took effect," the statement read.
The OSCE leaders said they "deplore" the spreading of disinformation amid the escalation, saying it "critically affects" local civilians.
22:51 GMT 18.02.2022
Fire at Gas Pipeline in Self-Proclaimed Luhansk Almost Extinguished, Local Authorities Speak of Sabotage by Kiev
22:20 GMT 18.02.2022
Self-Proclaimed DPR Evacuates 3,400 People, Emergencies Ministry Says 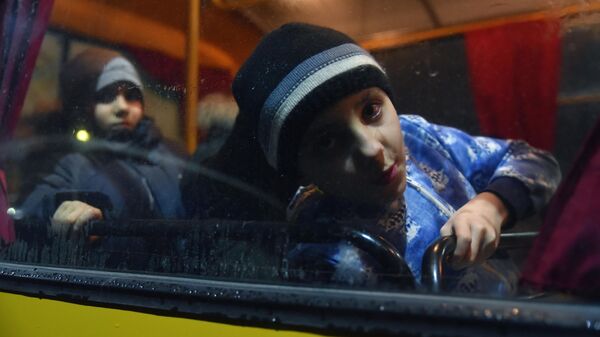