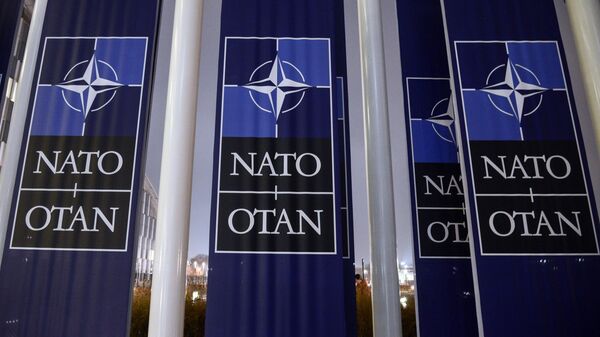 Subscribe
The issues of arms control, European security and military transparency are expected to be high on the meeting’s agenda. Both sides have declared that they have a number of issues and concerns to discuss and that they are serious about their positions.
A meeting of the Russia-NATO Council on security guarantees is underway at NATO headquarters in Brussels.
The US delegation to the NATO-Russia Council will be headed by Deputy Secretary of Defense Wendy Sherman. Russian Deputy Foreign Minister Sergey Ryabkov is expected to head the Russian delegation.
On Monday, the Russian and American delegations led by Deputy Foreign Minister Sergey Ryabkov and US Deputy Secretary of State Wendy Sherman, respectively, held closed consultations on Moscow's security proposals.
On 17 December, Russia released proposals for security guarantees to NATO and the United States which seek to prevent the alliance from expanding eastward Europe and prohibit the US and Russia from deploying intermediate and shorter-range missiles within striking distance of each other's territory, among other terms.
Follow Sputnik's Feed to Find Out More!
New firstOld first
17:27 GMT 12.01.2022
Russia Warned NATO About Dangers for European Security If Situation Deteriorates
Russia has frankly and directly pointed out to NATO that further deterioration of the situation may lead to grave consequences for European security, Russian Deputy Foreign Minister Alexander Grushko said on Wednesday.

"In a very honest and direct manner - without trying to gloss over contentious issues by using politically correct formulas - pointed out that a further downturn of the situation may lead to most unpredictable and most dire consequences for European security. Russia does not agree to such a scenario," Grushko told reporters after a meeting of the Russia-NATO Council in Brussels.

The discussion, which Grushko described as "quite frank, direct, deep, and intense" has revealed that " a great number of differences on fundamental issues" continue to remain between Russia and NATO, he said.

"The US and its allies are trying to achieve superiority in all operation environments. This includes land, airspace, maritime spaces, and now [also] space and cyberspace - all possible combat theaters," Grushko added.
17:27 GMT 12.01.2022
NATO Must Accept Russia's Peacekeeping Role to Start Cooperating, Grushko Says
NATO must recognise Russia's role as a peacekeeper and a guarantor of stability if it wants to cooperate, Russian Deputy Foreign Minister Alexander Grushko, one of Moscow's negotiators at the Russia-NATO Council meeting, said on Wednesday.

"If NATO countries really want to cooperate with us, they must accept this important role of Russia as a country that guarantees peace in the Euro-Atlantic region and that makes a critical contribution to maintaining peace and stability," Grushko said during a press conference.

Moscow will not allow anyone to dictate what kind of presence it should have in joint bodies with NATO, he went on.

"Russia will not allow anyone to dictate what kind of presence there should be. By and large, if NATO keeps claiming that they have no hostile intentions toward Russia, that they want to build cooperation with Russia, they should be interested in having more Russian diplomats," Grushko said.

Fundamental differences in viewing how European security should be maintained did not allow the sides to agree on further actions, the diplomat added.
16:20 GMT 12.01.2022

Russia-NATO Row on European Security
NATO Collectively Preparing for Every Eventuality With Russia if Diplomacy Fails, Sherman Says
15:35 GMT 12.01.2022
Dialogue at NATO-Russian Council 'Clearly Began' on Wednesday, Sherman Says
The dialogue of the NATO-Russia Council began on Wednesday and Russia had the opportunity to hear what the alliance's members other than the United States have to say, US Deputy Secretary of State Wendy Sherman told journalists.

Sherman also said it is also important that at the end of today's meeting Russia did not reject the idea of having more discussions with NATO.

"I am glad Russia was at the NATO summit and heard what other 30 states had to say," she added.
15:22 GMT 12.01.2022
Sherman: NATO-Russia Council Ended With ‘Sober Challenge’ to Moscow to De-Escalate
Wednesday's NATO-Russia Council meeting ended with a "sober challenge" from the alliance to Moscow to de-escalate amid growing tensions over Ukraine, Deputy Secretary of State Wendy Sherman.

"Today's meeting lasted nearly four hours. It ended with a sober challenge from the NATO allies to Russia," Sherman told a press briefing. "That challenge is to respond to the offers extended by the Secretary General of NATO, by the Polish chairman and office of the OSCE, by the French Presidency of the Council of the European Union, and by the President of the United States, to deescalate tensions, choose the path of diplomacy."

Sherman noted that during the meeting Russia did not make any commitment to de-escalate nor did it state that it would not do so.
15:18 GMT 12.01.2022
'I am Glad Russia Was at NATO Summit and Heard What Other NATO Allies Had to Say', Sherman Says
15:12 GMT 12.01.2022
US Deputy Secretary of State Briefs Media on Meeting With Russia

Russia-NATO Row on European Security
US Deputy Secretary of State Sherman Holds News Conference After Russia-NATO Council Meeting
14:07 GMT 12.01.2022
'We Will Do What We Can to Prevent a New Armed Conflict', NATO Chief Says
14:04 GMT 12.01.2022
Stoltenberg: NATO, Russia Hold Serious Discussion on Ukraine
NATO and Russia had a serious discussion on Ukraine during the meeting of the NATO-Russia Council on Wednesday, Jens Stoltenberg, the secretary general of the alliance, said.

"We had a very serious and direct exchange on the situation in and around Ukraine," Stoltenberg told a press briefing.

The secretary general also said that allies have reaffirmed "NATO’s open-door policy and the right of each nation to choose its own security arrangements."

Stoltenberg also said Russia has no right "to veto" Ukraine’s membership in the alliance and NATO allies are ready to support Kiev.

In addition, Stoltenberg said that Ukraine has a right to self defence and is not a threat to Russia, a powerful nuclear country.
14:02 GMT 12.01.2022
NATO May Strengthen Its Presence on Territory of Allies in East in Case of Escalation in Ukraine
13:59 GMT 12.01.2022
Stoltenberg: NATO-Russia Meeting Not 'Easy' But 'Important'
The meeting of the NATO-Russia Council in Brussels was not an easy one, but that is what makes it important, NATO Secretary General Jens Stoltenberg said on Wednesday.

"This was not an easy discussion, but that's exactly [why] this meeting was so important," Stoltenberg said at a press conference after the meeting.

He said "significant differences" remain between Russia and NATO countries and the differences will not be easy to overcome, "but it is a positive thing that all NATO allies and Russia sit down around the same table and engaged on substantive topics."

"At the same time, both NATO allies and Russia express the need to resume dialogue and explore the schedule of future meetings," Stoltenberg added.
13:57 GMT 12.01.2022
Ukraine Has Right to Self-Defence, It Is Not a Threat to Russia, Powerful Nuclear State, Stoltenberg Says
13:53 GMT 12.01.2022
Stoltenberg: Moscow Presented Its Positions on NATO Non-Enlargement
Russia presented its positions on non-enlargement of NATO during the NATO-Russia Council meeting on Wednesday, Jens Stoltenberg, the secretary general of the alliance, said.

"Russia raised the proposal that they published in December aimed at addressing their security concerns, the includes demands to stop admitting any new member to NATO and withdraw forces from eastern allies," Stoltenberg said.
13:49 GMT 12.01.2022
NATO Ready to Discuss With Russia Nuclear Policy Issue, Mutual Restriction on Missiles
13:48 GMT 12.01.2022
Stoltenberg: Russia, NATO Interested in Restoring Work of Their Diplomatic Missions in Moscow and Brussels
The bloc's chief added that NATO has no preconditions for restoring the work of its Russian mission.
13:40 GMT 12.01.2022
NATO Welcomes Bilateral Consultations Between Russia and US on Security Guarantees, Stoltenberg Says
13:39 GMT 12.01.2022
Stoltenberg: NATO Allies Interested in Improving Military and Civilian Channels of Communication With Russia