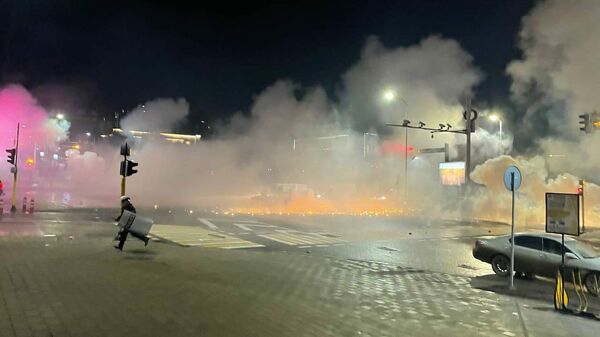 A wave of deadly riots swept across Kazakhstan earlier this week, following a sharp rise in gas prices. Despite the government's attempts to quell the crowds and now-fulfilled promises to decrease prices, peaceful protests turned into violent clashes with law enforcement officers, as well as looting, arson and acts of terrorism across the country.
Kazakhstan is currently under a state of emergency until 19 January as counter-terrorism operations continue across the country. President Kassym-Jomart Tokayev asked for the Collective Security Treaty Organisation's (CSTO) assistance at the height of the violence, with several member-states of the alliance agreeing to deploy CSTO peacekeepers to Kazakhstan to safeguard vital infrastructure facilities in the country, while Kazakh law enforcement agencies work to bring the situation under control.
Tokayev said on Friday that the government had reached a compromise with peaceful protesters on urgent social and economic issues and that he was going to announce specific measures on Tuesday.
Over 5,000 people have been detained throughout Kazakhstan in relation to the unrest, which saw mass looting, arson, the killing of law enforcement officers, and at least one confirmed beheading of a police officer. The preliminary damage amounts to over $200 million.
Follow Sputnik's Live Feed to Find Out More!
New firstOld first
19:40 GMT 09.01.2022
Nearly 400 National Guard Members Were Injured During Week of Riots In Kazakhstan
17:45 GMT 09.01.2022
Rioters Tried to Kill Almaty Mayor on 5 January, His Deputy Says

Deputy chairmen of the country's security committee, Marat Osipov and Daulet Ergozhin, were relieved from their duties. Bakytbek Koszhanov and Askar Amerkhanov were appointed new deputy heads by the presidential decree.

Karim Masimov, the former chief of the National Security Committee, was previously taken into custody on treason charges. The committee said that a pre-trial investigation was opened into Masimov and unnamed others on Thursday after Kazakhstan was hit by violent protests.
16:12 GMT 09.01.2022
We Need to Understand What's Going on in Kazakhstan, Including What Russia is Doing, French Minister Beaune Says
15:42 GMT 09.01.2022
Over 160 Foreigners Taken to Police in Kazakh Capital to Verify Legitimacy of Their Stay
More than 160 foreign citizens have been detained in the Kazakh capital of Nur-Sultan while the police check the legality of their presence in the city, the police said on Sunday.

"161 foreign individuals were brought to the police station for checking the legality of their stay in the capital," the capital police said in a statement posted on Instagram.
15:08 GMT 09.01.2022
Moscow: Kazakhstan Asked for CSTO Help at Critical Moment

Protests in Kazakhstan
Moscow: CSTO Allies Worked in Sync at Critical Moment for Kazakhstan
14:23 GMT 09.01.2022
Shoot to Kill Order in Kazakhstan 'Wrong', Should Be 'Rescinded', Blinken Tells ABC
"The shoot-to-kill order, to the extent it exists, is wrong and should be rescinded," Blinken said during an interview on ABC's "This Week."
14:09 GMT 09.01.2022
Putin to Join Online CSTO Summit on Kazakhstan on 10 January
Russian President Vladimir Putin will dial in to a video conference of heads of the Collective Security Treaty Organization (CSTO) on Monday to discuss Kazakhstan, his office said.

"Russian President Vladimir Putin will take part in an emergency meeting of the Council of the Collective Security Treaty Organization on January 10, 2022," a statement read.

The video summit of Armenia, Belarus, Kazakhstan, Kyrgyzstan, Russia, Tajikistan and Uzbekistan will focus on the situation in Kazakhstan in the wake of violent protests and on ways to normalize it.

The sides do not plan to adopt any documents following the extraordinary session of the CSTO security council on Monday, Kremlin spokesman Dmitry Peskov said.
14:04 GMT 09.01.2022
Kazakh President to Announce Reshuffle on Tuesday
Kazakh President Kassym-Jomart Tokayev will make personnel changes in the government on 11 January, the presidential press secretary, Berik Uali, said on Sunday, following nearly a week of protests.

"On January 11, there will be personnel changes," Uali said as aired by the Kazakh broadcaster Khabar 24.

Earlier on Sunday, it was reported that Tokayev would present the candidacy of the new head of government on 11 January.
14:03 GMT 09.01.2022
Rioters Acted in a Highly Organised Manner, Internal Affairs Minister Says

Protests in Kazakhstan
Kazakhstan’s Minister of Internal Affairs Details High Level of Organisation Among Rioters
13:16 GMT 09.01.2022
Kyrgyzstan President Says He Cannot Rule Out That Kyrgyz Citizens Took Part in Protests in Kazakhstan
Kyrgyz President Sadyr Japarov said on Sunday that he could not rule out the possibility that some Kyrgyz citizens may have taken part in protests in Kazakhstan over the past week.
13:09 GMT 09.01.2022
Kazakhstan Suspends Currency Exchange Services in Banks - National Bank
Currency exchange services in Kazakhstan's banks have been suspended for security purposes, the country's national bank said Sunday, following several days of protests that started over increased fuel prices and quickly descended into violence.

The suspension is meant to ensure "security and safety of the services themselves as well as staff and clients," according to the bank's statement.

The banking system will be restored in stages due to unstable internet and ongoing counterterrorist operation in the city of Almaty, the bank said.

"The progress of the CSTO peacekeepers deployment on the territory of Kazakhstan, which were sent there in accordance with the decision of the Collective Security Council, adopted on January 6, 2022, in order to normalize the situation in the Republic of Kazakhstan, was discussed. It was noted that the units of the peacekeepers have already begun to fulfill the assigned tasks. They took important state, military and strategic facilities under protection, " Vladimir Zainetdinov said.
12:30 GMT 09.01.2022
Kazakhstan to Wage Counter-Terrorist Operation Until Order Restored, Defence Ministry Says
The counter-terrorist operation in Kazakhstan will continue until the complete elimination of terrorists and the restoration of order in the country, Kazakh Deputy Minister of Defense Lieutenant General Sultan Gamaletdinov said Sunday.

"As of now, the counter-terrorist operation continues on the territory of the Republic of Kazakhstan. It will continue until the complete elimination of terrorists and the restoration of the constitutional order in the Republic of Kazakhstan," Gamaletdinov said at a joint briefing with the head of the CSTO mission in Kazakhstan, Col. Gen. Andrey Serdyukov.
12:28 GMT 09.01.2022
Some 400 Rioters Detained in Kazakhstan's Shymkent, Reports Say
About 400 protesters were detained in the Kazakh city of Shymkent, half of whom came from other regions, Kazakh broadcaster Khabar 24 channel reported on Sunday, citing sources in the city administration.

According to the broadcaster, 45 police officers received various injuries, two officers with serious injuries were admitted to intensive care, and 155 administrative and 55 criminal cases were initiated.

Earlier on Sunday, the broadcaster reported that police of the Kazakh city of Taraz eliminated about ten criminals, and also detained 153 people as part of the counterterrorist operation.

The Interior Ministry said more than 1,300 police, National Guard troops and military personnel had been hurt across the country since violent protests broke out over high fuel prices a week ago. The ministry revised the number of law enforcers killed during security operations down to 16 from 18.
12:00 GMT 09.01.2022
CSTO Peacekeeper Mission Completes Relocation to Kazakhstan
The mission will remain in the country until the situation normalises, the chief of the peacekeepers said.
11:13 GMT 09.01.2022
164 People Killed During Unrest in Kazakhstan, Health Ministry Says
Death toll in recent unrest in Kazakhstan reached 164, Kazakhstan's Health Ministry said Sunday.

"During the unrest, 164 people died in Kazakhstan, [including] 103 in Almaty," a statement on the Telegram channel with releases of Kazakh government agencies said.
10:53 GMT 09.01.2022
Kazakh Official Says Rioters Were Well-Prepared, Used Radio for Coordination
The protesters in Kazakhstan demonstrated professional skills, Kazakh acting Interior Minister Yerlan Turgumbayev said on Sunday, adding that the rioters used radio to coordinate their actions.

According to Turgumbayev, the rioters also attacked the buildings of the police and military units in an attempt to seize weapons.
Newsfeed
0
Access to the chat has been blocked for violating the rules . You will be able to participate again through:∞. If you do not agree with the blocking, please use the feedback form
The discussion is closed. You can participate in the discussion within 24 hours after the publication of the article.
To participate in the discussion
log in or register
loader
Chats
Заголовок открываемого материала