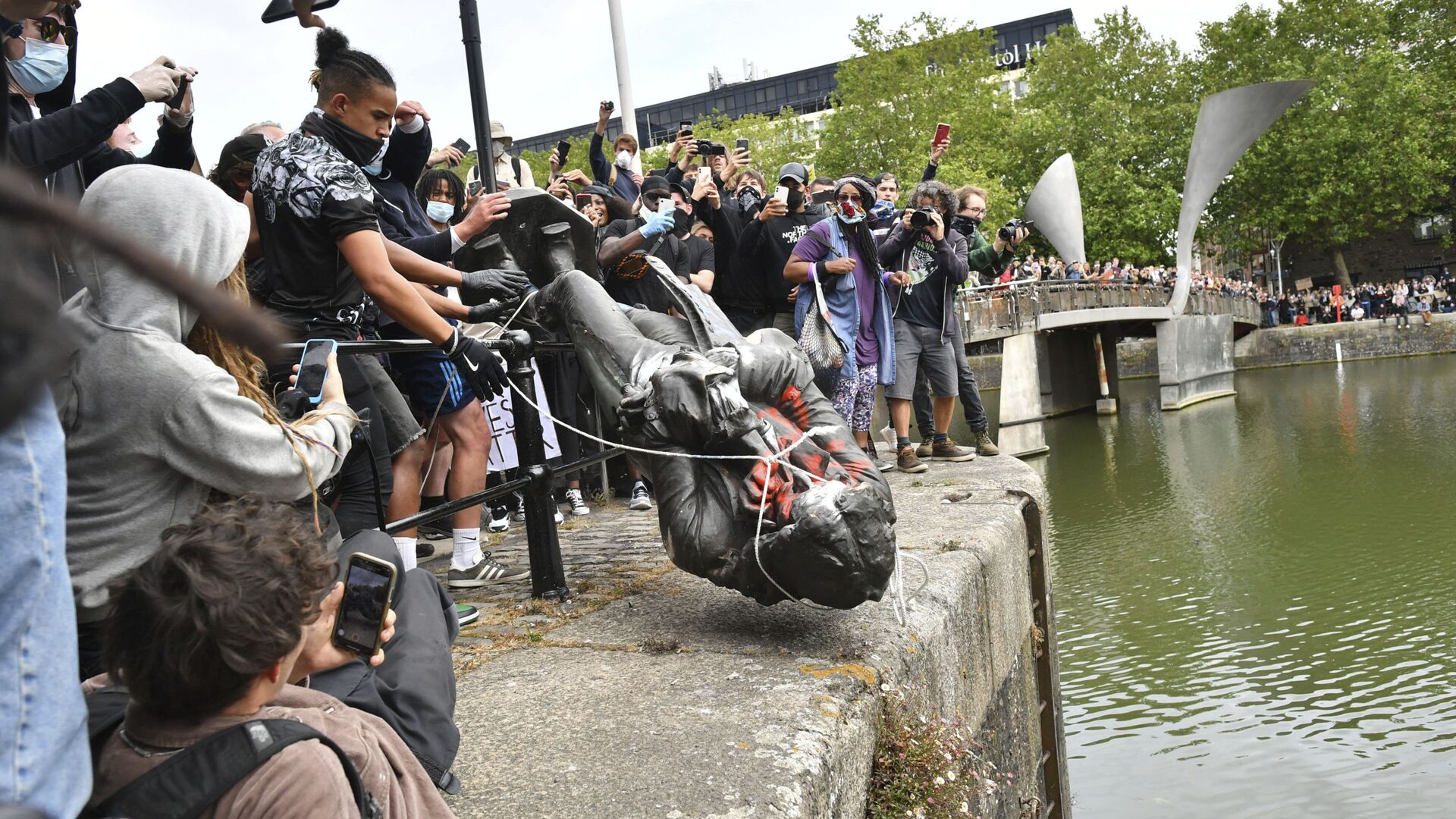 Max Gorbachev
All materialsWrite to the author
The statue of the English merchant, who was involved in the enslavement of over 80,000 people in Africa, including children, was toppled and dumped in a harbour by demonstrators on 7 June 2020 during global protests against racial inequality. The incident sparked a debate on which statues should remain standing across the UK.
UK MPs have slammed the verdict in the Colston statue case, which saw four people accused of illegally removing the monument to Edward Colston being cleared of criminal damage. Commenting on the jury's decision, Tory legislator Peter Bone described it as "dangerous" and one that "could license to people elsewhere in the country to go around pulling statues down".

"I'm not privy to what was said in court, but if somebody topples a statue or any other structure that is criminal damage and one would expect people to be punished for doing that. It's a very strange decision. I hope the government will do everything in its power to make sure there's no room for people to commit criminal damage on the basis of some woke objective or other", Mr Bone said.

His statement was echoed by that of Lee Anderson, who noted that the decision to clear individuals of criminal damage charges should be not be based on who is represented by a statue.

"We live in a democracy and if people are offended by a statue then they should use the local democratic process to have them removed and not mindless thuggish behaviour", Anderson said.

Another Tory MP, Robert Jenrick, said the verdict states that vandalism and criminal damage are acceptable forms of political protest, something that undermines the rule of law, the lynchpin of Britain's democracy.

George Floyd Protests, Toppling of the Statue, and Trial

In 2020, the United States was rocked by massive protests against racism and police brutality that were triggered by the death of African American George Floyd. The 46-year-old was arrested in Minneapolis after a shop clerk called the police claiming a customer had used a forged banknote. Officers who arrived at the scene handcuffed Floyd and tried to put him in a police car.
A struggle ensued, during which they pinned Floyd to the ground, with policeman Derek Chauvin placing his knee on the man's neck. Floyd told police officers more than 20 times that he was unable to breathe. Despite his pleas, the officer continued to kneel on his neck for almost ten minutes, even after Floyd fell unconscious.

His death reignited the debate on racial injustice in the United States and sparked the biggest protests in the country since the assassination of famous civil rights activist Martin Luther King Jr. in 1968. Protests against racism then spread to other parts of the world and were held in Latin America, the Middle East, and Europe, including Germany, Spain, France, and Britain.

During one such demonstration in the United Kingdom protesters in Bristol, England, toppled and dumped in a harbour the statue of Edward Colston, an English merchant who was involved in the Atlantic slave trade. According to UK media outlets, over the course of his lifetime he enslaved 84,000 people, including children. Colston was also involved in philanthropy and donated to schools, organisations supporting the poor, and hospitals.

In 1895, a statue of him was installed in the centre of Bristol to commemorate his philanthropic works. Several decades later his slave-trading activities were detailed in a biography of his life and by the end of the 20th century there were calls to add a second plaque to the statue to state that Colston was also a slave trader.

In 2018, the Bristol City Council made a planning application to add the second plaque, but due to disagreements on the wording it was never installed.

The removal of the statue by the protesters divided the public and prompted a debate on whether statues commemorating individuals involved in the slave trade or deemed racist now should remain standing.

During the trial the prosecution insisted that Colston's slave trade past was "wholly irrelevant". QC William Hughes said the case was about "the rule of law" and the "cold hard facts".

Sage Willoughby, 22, one of the four defendants, said they didn't try to edit history, noting that others were "whitewashing" it by calling Colston a "virtuous man".

The four defendants were greeted by a crowd of supporters standing outside the court.