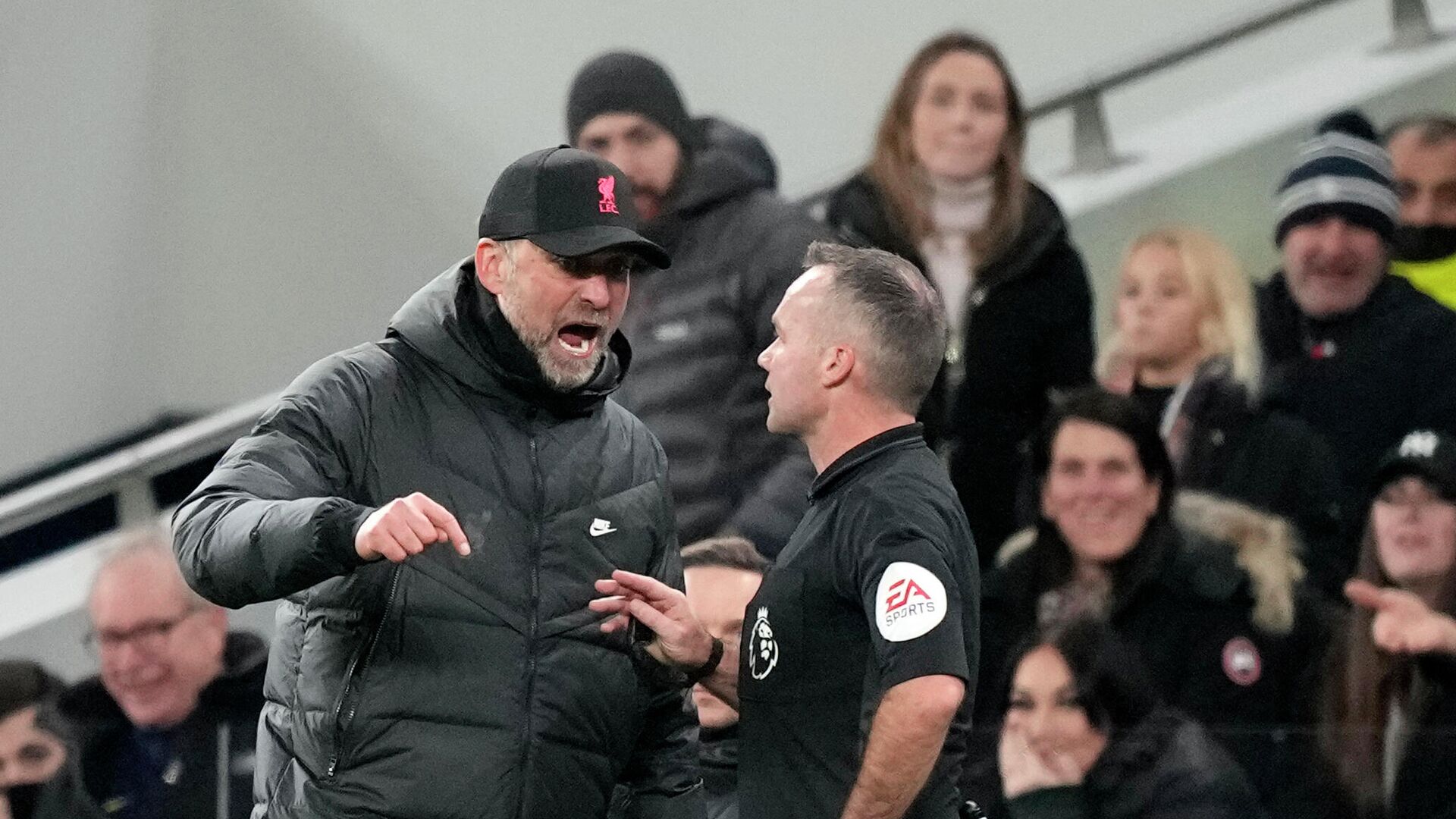 Pawan Atri
All materials
2019-20 Premier League champions Liverpool are currently right on the heels of table toppers Man City with only three points separating the two sides. While Pep Guardiola's men have 44 points, the Reds are second with 41 points. Yet, Jurgen Klopp wasn't happy with the result of his team's match against Tottenham over the weekend.
Liverpool boss Jurgen Klopp has slammed referee Paul Tierney after the Reds failed to secure all three points against Tottenham on Sunday because of a series of controversial decisions by the match official.

"I have no problems with any referees. Only you", Klopp told the referee after the final whistle.

"I really have no idea what his problem is with me. Honestly, I have no idea. I have no problem… you just need an objective ref who sees the situations and judges them and not opinions", he added.

🗣 "Harry [Kane] can not judge that, If Robbo's leg is on the ground then it's a broken leg."

Jurgen Klopp has no doubts that Harry Kane should've been sent off for his challenge on Andy Robertson pic.twitter.com/3vhvE4dWOX

The first incident came in the first half of the match, when Harry Kane was trying to grab the ball back from Liverpool defender Andy Robertson, but hit his ankle in the process, leaving the Scottish footballer writhing in pain after he fell to the ground.
Despite the harsh tackle Tierney only gave the England skipper a yellow card.

On the other hand, Robertson was later given a red card for a dangerous tackle against Spurs right-back Emerson Royal.

Klopp was also at loggerheads with Tierney after the referee denied Diogo Jota a penalty in the first half when Emerson barged into him. With Klopp's anger growing with each disputed decision, the referee eventually booked him for dissent.

The former Premier League champions were in a dominant position to complete a 2-1 victory, after coming from behind in the second half - courtesy of goals from Jota and Robertson. But a 74th minute strike from South Korean forward Son Heung-Min shattered their dreams as the match ended in a disappointing 2-2 draw.

Harry Kane had powered Tottenham to an early lead with his goal in the 13th minute. It was Kane's first Premier League goal at home this season.

Unlike Klopp who was left fuming by the referee, the England skipper defended both himself and the match official.

"I thought it was a strong tackle but I won the ball… even Andy (Robertson) said 'You just caught my foot – I don't think it was a foul'. Sometimes, when you slow stuff down in football, it makes it look worse than what it is. That's what VAR is there for", the Spurs talisman said.

Meanwhile, former players Jamie Redknapp and Jamie Carragher disagreed with Kane's argument about the tackle and insisted that he was fortunate to avoid a red card.

Redknapp even claimed that the 28-year-old footballer was completely out of control and his behaviour was reckless to say the least.

"It's a red card. He's reckless and out of control. The crowd were up, fever pitch. When you go in for a challenge, I've seen a lot of players sent off for less than that", the noted football pundit concluded.
Newsfeed
0
Access to the chat has been blocked for violating the rules . You will be able to participate again through:∞. If you do not agree with the blocking, please use the feedback form
The discussion is closed. You can participate in the discussion within 24 hours after the publication of the article.
To participate in the discussion
log in or register
loader
Chats
Заголовок открываемого материала