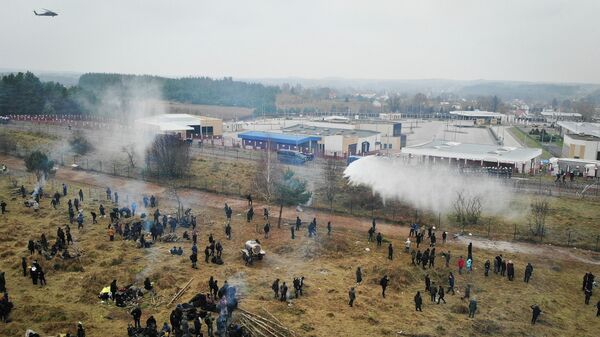 Poland-Belarus Migrant Crisis
Putin: Europe is Using Migrant Crisis as Pretext to Pressure Belarus
11:46 GMT 18.11.2021
European Commission Says to Hold Only Technical Talks on Migrants With Belarus
MOSCOW (Sputnik) - The European Commission will only hold technical contacts with Belarus on migrants, spokesman Eric Mamer on Thursday, adding that this will not affect the issue of imposing new sanctions.

"There is no question with negotiating with [Belarusian President Alexander] Lukashenko's regime. We will hold technical talks with the UN agencies and the Belarusian counterparts in order to facilitate the repatriation of the people in the border," Mamer said during the commission's briefing.

The spokesman also said that the work on the EU sanctions is now "finalised."

"In terms of sanctions, nothing has changed our position remains as it was before when it comes to Belarus," Mamer added.

10:01 GMT 18.11.2021
Kazakhstan Mulling Banning Air Transfer to Belarus for Some States
ALMATY (Sputnik) - Kazakhstan authorities are considering a temporary ban on air transfer of some nationals to Belarus due to the migration crisis at the Belarusian-Polish border, Chairman of the Civil Aviation Committee Talgat Lastayev told Sputnik on Thursday.

"The issue is being studied together with concerned governmental agencies", Lastayev said.

"We, the G7 Foreign Ministers of Canada, France, Germany, Italy, Japan, the United Kingdom and the United States of America, and the High Representative of the European Union condemn the Belarus regime’s orchestration of irregular migration across its borders. These callous acts are putting people’s lives at risk. We are united in our solidarity with Poland, as well as Lithuania and Latvia, who have been targeted by this provocative use of irregular migration as a hybrid tactic," the G7 said in a joint statement.

"In total, over the past day, nine patients have turned to the ambulance doctors on duty at the Belarusian-Polish border. Two of them have been hospitalised", the ministry wrote on its Telegram channel.