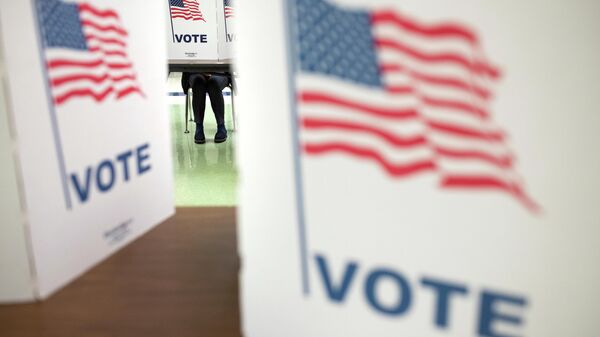 Live Updates: McAuliffe Refuses to Concede in Virginia Despite 100,000 Vote Gap With Youngkin

Subscribe
International
India
Africa
Hundreds of thousands of voters have lined up to polling sites across the US as several states hold gubernatorial and mayoral races ahead of the 2022 midterm elections. Experts have suggested that Tuesday's election results could offer clues into what may come in 2022.
With gubernatorial races in Virginia and New Jersey taking place, voters are also lining up at the polls to weigh in on mayoral races in New York City, Atlanta, Boston, Buffalo and Minneapolis.
The race between Virginia's Terry McAuliffe (D) and Glenn Youngkin (R) is considered one of today's more contested elections, as many are looking at the race as a preview of the 2022 midterm elections.
Follow Sputnik's Live Feed to Find Out More!
Table of contents
New firstOld first
04:38 GMT 03.11.2021
McAuliffe Refuses to Concede in Virginia Elections Despite 100,000 Vote Gap With Youngkin
Democratic candidate Terry McAuliffe declined to concede defeat in the Virginia gubernatorial race until all the votes are counted - despite the preliminary results suggesting that his opponent, Republican Glenn Youngkin is winning the race by a 100,000-vote lead.

"We still got a lot of votes to count, we got about 18 percent of the vote out, so we’re gonna continue to count the votes because every single Virginian deserves to have their vote counted", McAuliffe stated.

02:00 GMT 03.11.2021
Socialist India Walton Losing Mayoral Bid in Buffalo to Write-In Camp
Buffalo's India Walton clinched the mayoral bid in the primaries, but is presently falling behind as incumbent Mayor Byron Brown is running a write-in campaign against the self declared Democratic Socialist.

UPDATE: With 53 percent of the Election Day vote in:

"I would like to thank my BASE for coming out in force and voting for Glenn Youngkin. Without you, he would not have been close to winning. The MAGA movement is bigger and stronger than ever before... pic.twitter.com/c8Si5jwZTb

01:03 GMT 03.11.2021
Donald Trump Says 'All Eyes Are on Fairfax' Amid Claims Supporters 'Turning Out Big' for Youngkin
Former US President Donald Trump joined the fray in Virginia's gubernatorial election on Tuesday evening, sending out a short press release in the same form as he used to tweet from his now-suspended Twitter account.
Trump said "early indications are that MAGA [Make America Great Again] voters are turning out big for Glenn Youngkin [R], let's see what happens."
"All eyes are on Fairfax, why the delay?" he asked, referring to earlier reports that the Northern Virginia county was rescanning 20,000 ballots after encountering errors in the data storage system.

00:59 GMT 03.11.2021
Republican Jason Ballard Projected to Win Virginia's 12th House District
With 36 of 44 precincts reporting about 90 minutes after polls closed on Tuesday, Ballard remained in a clear lead over Democratic incumbent Chris Hurst, receiving 60% of the votes thus far compared to 39.52% for Hurst, according to Virginia's Department of Elections website.
Just hours before polls opened, Hurst was spotted by Virginia police on Monday night tampering with campaign signs in the city of Radford. Police said he was given a ticket for driving with a suspended license.
00:44 GMT 03.11.2021
Northern Virginia County Rescanning 20,000 Ballots Due to Technical Issue, Official Says

Fairfax County is rescanning roughly 20,000 ballots from early voting sites after there was a technical issue with a thumb drive the votes are stored on, according to a Fairfax County official.
Official says there is a paper trail of votes cast and are working on it now@wusa9

🗳 Virginia Voters! If you’re in line, stay in line. As long as you joined the line before polls close at 7 PM, you can vote.