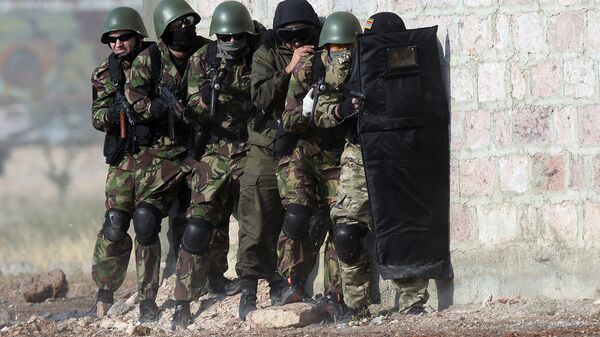 Subscribe
The recent developments in Afghanistan are still in the limelight. Will the newly-created Afghan government be able to handle all the issues that emerged after the US withdrawal? What is the West's stance on further interaction with the Taliban*? Check out Sputnik's live updates to keep in touch with the latest news on Afghanistan.
It has been more than a month since the Taliban seized Afghanistan's capital Kabul and declared the nearly twenty-year war in the country over.
On 31 August, the US military left the Kabul Airport, bringing an end to the American presence in Afghanistan. On 6 September, the Taliban stated that it had gained control of Panjshir, the last of Afghanistan's 34 provinces not under their control. Following the fall of the defiant province, the Taliban announced the composition of the interim government of Afghanistan. It is headed by Mohammad Hasan Akhund, who served as foreign minister during the first Taliban rule. Akhund has been under UN sanctions since 2001.
Meanwhile, the Biden administration has once again been criticised for its handling of the Afghanistan crisis. The student activist organisation, Young Americans for Liberty (YAL), said in a statement on 15 September that Biden is using the situation in Afghanistan and the COVID-19 pandemic to score political points rather than solve those issues.
*The Taliban is a terrorist organisation banned in Russia and many other countries.
New firstOld first
17:02 GMT 16.09.2021
Several Rockets Reportedly Hit Kabul, Could Have Struck Power Plant

"This is a commitment that should be assumed by those countries, which knew how Afghanistan should live, promised something to the people of this country, led them somewhere, and now should translate into life all those words that have been said over 20 years", Russian Foreign Ministry spokeswoman Maria Zakharova said when asked who should receive refugees from Afghanistan.

According to the spokeswoman, Moscow expects the country to return to peace.

"We noted the Taliban’s [banned in Russia] readiness to hold general elections in the country. It is encouraging that preparations are underway to resume the operation of the Kabul international airport, "Zakharova told a press conference.

Zakharova also said that Russia plans to continue making efforts on Afghan settlement within the "Moscow format."
13:51 GMT 16.09.2021
Russian, Chinese, Iranian, Pakistani Foreign Ministers to Discuss Afghanistan in Dushanbe
MOSCOW (Sputnik) - A quadripartite meeting of the foreign ministers of Russia, China, Pakistan and the aide to the Iranian foreign minister will be held in Dushanbe, at which the parties will discuss the situation in Afghanistan, Russian Foreign Ministry spokeswoman Maria Zakharova said.
"Also in Dushanbe, a quadripartite meeting of the foreign ministers of Russia, China, Iran and Pakistan is planned, during which they will discuss a number of problems on the international agenda, including the current situation, of course, in Afghanistan," she said at a briefing.
According to Zakharova, Tehran said it would be represented by the minister's aide.
12:56 GMT 16.09.2021
Germany May Become First Country to Reopen Embassy in Afghanistan, Reports Suggest
MOSCOW (Sputnik) - Germany may become the first country in the world to reopen its embassy in Afghanistan, Al Jazeera reported on Thursday, citing Anas Haqqani, a senior member of the Taliban (banned as a terrorist organisation in Russia).

President of Uzbekistan Shavkat Mirziyoyev will take part in the summit of the heads of the SCO member states in Dushanbe on September 16-17. After the meeting, the chairmanship of the organisation will be transferred to Uzbekistan.

"The main priorities of Uzbekistan's presidency in the SCO include transport connectivity, strengthening the economic dimension of the SCO, combating the consequences of the pandemic, intensifying health collaboration, as well as cooperation in the context of more active involvement of Afghanistan in regional economic processes," Dunyo mentioned.

According to the agency, the concept and the plan of the next Uzbekistan's presidency in the SCO will be presented to the member states of the organisation during the summit in Dushanbe. Uzbekistan chaired the SCO in 2004, 2010 and 2016.

In 2017-2020, the Uzbek side put forward 32 initiatives at the SCO summits, 11 of which were implemented. They were related to security, transport, economy; scientific, technical and digital development; tourism and public diplomacy. In particular, a mechanism of meetings of the heads of railway administrations, the SCO Public Diplomacy Center in Uzbekistan and the Silk Road International University of Tourism in Samarkand, have been established.

The SCO is an international organisation founded in 2001 by the leaders of China, Russia, Kazakhstan, Tajikistan, Kyrgyzstan and Uzbekistan. The SCO observer countries are Afghanistan, Belarus, Iran and Mongolia while the partner countries are Azerbaijan, Armenia, Cambodia, Nepal, Turkey and Sri Lanka. In 2021, the organisation is chaired by Tajikistan.
07:57 GMT 16.09.2021
UN Representative Meets With Taliban Intel Chief to Discuss Safety of UN Staffers in Afghanistan
MOSCOW (Sputnik) - UN representatives held a meeting with Abdulhaq Wasiq, the intelligence chief of the Taliban (banned as a terrorist organisation in Russia) government, to discuss safety of UN personnel in Afghanistan, the United Nations Assistance Mission in Afghanistan (UNAMA) said on 16 September.

UNAMA wrote on Twitter that UN Special Representative for Afghanistan Deborah Lyons and UN Under-Secretary-General for Safety and Security Gilles Michaud "today met with intelligence chief Abdulhaq Wasiq about securing the safety of UN personnel, the threat posed by Islamic State [banned as a terrorist organisation in Russia], and the importance of humanitarian assistance reaching those Afghans in need of help."
07:38 GMT 16.09.2021
Taliban Seeks to Build Good Relations With World Through Diplomacy, Spokesman Says

Afghanistan
Taliban Seeks to Build Good Relations With World Through Diplomacy, Spokesman Says
06:04 GMT 16.09.2021
China's Xi to Address CSTO as Afghanistan Tops Agenda
MOSCOW (Sputnik) - Chinese President Xi Jinping will address his counterparts from the Shanghai Cooperation Organisation (SCO) and the Collective Security Treaty Organisation (CSTO) via video conference, Xinhua reported on 16 September, citing the Chinese Foreign Ministry.
CSTO will convene in Dushanbe later in the day and will be followed by a SCO summit on 17 September. Afghanistan is expected to be among the most pressing topics.
05:46 GMT 16.09.2021
CSTO Leaders to Discuss Situation in Afghanistan, Its Impact on Bloc Security
DUSHANBE (Sputnik) - The Collective Security Treaty Organisation's (CSTO) supreme body - the Collective Security Council (CSC) - will meet Thursday in Dushanbe.

The agenda will focus on the situation in Afghanistan and its impact on the security of the countries participating in the military-political bloc.

The meeting of the CSTO leaders will be chaired by President of Tajikistan Emomali Rahmon. The event will also be attended by Armenian Prime Minister Nikol Pashinyan, Belarusian leader Alexander Lukashenko, Kazakh President Kassym-Jomart Tokayev and Kyrgyz President Sadyr Japarov. Russian President Vladimir Putin earlier said that in connection with COVID-19 cases among people close to him, he must self isolate, therefore he will attend the meeting via video link.
05:45 GMT 16.09.2021
Taliban Will Need Int'l Assistance in Case of Humanitarian Crisis, Pakistan Prime Minister Says
MOSCOW (Sputnik) - Afghanistan's interim government, formed by the Taliban movement (recognised as terrorist, banned in Russia), will need international assistance in the event of a humanitarian crisis in the country, Pakistani Prime Minister Imran Khan said.

"The Taliban hold all of Afghanistan and if they can sort of now work towards an inclusive government, get all the factions together, Afghanistan could have peace after 40 years. But if it goes wrong and which is what we are really worried about, it could go to chaos. The biggest humanitarian crisis, a huge refugee problem," Khan told CNN.
He said the Taliban are looking for international assistance to avoid a crisis.
501000
Newsfeed
0
New firstOld first
loader
LIVE
Заголовок открываемого материала
Access to the chat has been blocked for violating the rules . You will be able to participate again through:∞. If you do not agree with the blocking, please use the feedback form
The discussion is closed. You can participate in the discussion within 24 hours after the publication of the article.
To participate in the discussion
log in or register
loader
Chats
Заголовок открываемого материала
Worldwide
InternationalEnglishEnglishMundoEspañolSpanish
Europe
DeutschlandDeutschGermanFranceFrançaisFrenchΕλλάδαΕλληνικάGreekItaliaItalianoItalianČeská republikaČeštinaCzechPolskaPolskiPolishСрбиjаСрпскиSerbianLatvijaLatviešuLatvianLietuvaLietuviųLithuanianMoldovaMoldoveneascăMoldavianБеларусьБеларускiBelarusian
Transcaucasia
ԱրմենիաՀայերենArmenianАҧсныАҧсышәалаAbkhazХуссар ИрыстонИронауОssetianსაქართველოქართულიGeorgianAzərbaycanАzərbaycancaAzerbaijani
Middle East
Sputnik عربيArabicArabicTürkiyeTürkçeTurkishSputnik ایرانPersianPersianSputnik افغانستانDariDari
Central Asia
ҚазақстанҚазақ тіліKazakhКыргызстанКыргызчаKyrgyzOʻzbekistonЎзбекчаUzbekТоҷикистонТоҷикӣTajik
East & Southeast Asia
Việt NamTiếng ViệtVietnamese日本日本語Japanese中国中文Chinese
South America
BrasilPortuguêsPortuguese
NewsfeedBreaking
08:45 GMTJapanese PM Kishida: Tokyo Eyeing Enemy Base Strike Capability Amid China and NK's Military Buildup
08:34 GMTBiden's Re-Election Bid: Should US Politicians & Justices of Advanced Age Undergo Cognitive Tests?
08:21 GMTAt Least One Killed in Northern Ireland as Storm Arwen Pounds Parts of UK
07:58 GMT'Dry Turkey' on 'Stolen Land': BLM Faces Twitter Backlash for Blasting Thanksgiving
07:25 GMT'End of an Era': Celebs Pay Tribute to Broadway Legend Stephen Sondheim
07:00 GMT'Thank God I Didn't Lose Any Teeth': Ovechkin Receives Stitches After Puck Blow to His Face
06:12 GMTNetizens in Grip of Guesswork After WHO Skips Two Greek Letters to Name New COVID Variant
05:55 GMTAustralia Halts Flights From 9 Southern African Countries Over Omicron Strain
05:24 GMTKanye West Says God Wants to Bring Him and Kim Together Again
05:10 GMTAs Indian Health Survey Suggests Women Outnumber Men Expert Claims 'This Isn't the Real Number'
04:50 GMTP&G Recalls Over a Dozen Old Spice, Secret Sprays After Detection of Cancer-Causing Chemical
03:47 GMTAlabama AG Threatens to Sue City Officials for Removing Confederate President's Name From Avenue
03:39 GMTOver 100 People Arrested in Solomon Islands After Riots in Honiara, Police Say
03:39 GMTMigrant Caravans in Mexico Head North After Slow Visa Processing by Authorities - Reports
03:34 GMTOutgoing UK Chief of Defense Staff Describes Russia as Most Acute Threat
02:59 GMTRussia, China Slam Idea of Summit For Democracy As It Contradicts Development of Modern World
02:30 GMTBoebert vs. 'Jihad Squad': GOP Rep. Buries the Hatchet With Squad's Omar Over Feud Caused by Remarks
01:53 GMT'As if Disney Were Entering Notre-Dame': Critics Blast Cathedral's 'Woke' Rebuilding Plan - Report
01:42 GMTMan Killed After Trying to Crash Gate of San Diego Military Base With Knife
01:07 GMTNew York Governor Declares State of Emergency Amid Spike in COVID-19 Infections