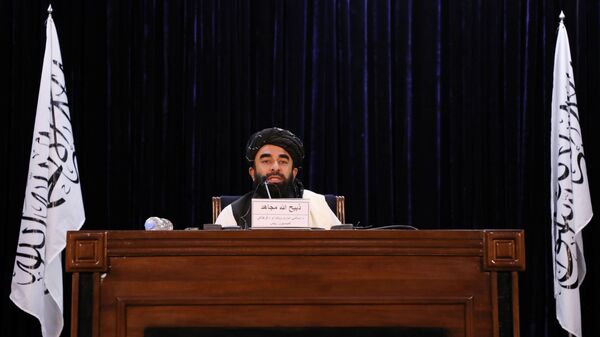 Live Updates: Taliban Says 'No Time for Protests' Until Afghanistan Returns to Stability

Subscribe
International
India
Africa
On 6 September, the Taliban* movement claimed that the war in Afghanistan is over after the group's spokesman, Zabihullah Mujahid, announced that Panjshir had become the last of the 34 Afghan provinces to eventually fall under the control of the Taliban. However, resistance forces refute the claim.
Following the takeover of Panjshir and the proclamation of the end of the war in the country by the Taliban, a spokesman for the movement, Ahmadullah Muttaki, said preparations for the announcement of the new Afghan government have been completed.
According to Muttaki, the government will be announced shortly.
Following a weeks-long offensive, the Taliban took over Kabul on 15 August, prompting the civilian government to fall. The United States completed its troop withdrawal from Afghanistan by 31 August, ending its nearly twenty-year military presence in the country.
Follow Sputnik's Feed to Find Out More!
*The Taliban is a terrorist organisation banned in Russia and man other nations.
Table of contents
New firstOld first
00:25 GMT 08.09.2021
US 'Concerned' by Affiliations, Track Records of Some Taliban Cabinet Members - State Department
WASHINGTON (Sputnik) - The Biden administration is concerned about the affiliations and track records of several newly-announced Taliban (banned in Russia as a terrorist group) cabinet members, a State Department spokesperson said in a statement to Sputnik.

"We note the announced list of names consists exclusively of individuals who are members of the Taliban or their close associates and no women," the spokesperson said on Tuesday. "We also are concerned by the affiliations and track records of some of the individuals."

"The government declared by the Taliban in Afghanistan, with the prime minister on the list of terrorists and the foreign minister being wanted by the FBI, clearly, is not a good sign for the international community, moreover, it is the worst sign," Di Maio told the national La7 broadcaster.

The official added that the issue of recognition of the Taliban as the legitimate authority had not been raised by any country.
20:29 GMT 07.09.2021
Resistance Calls Taliban Government Illegal
MOSCOW, September 7 (Sputnik) - The National Resistance Front of Afghanistan (NRF) deems the new Afghan government run by the Taliban (terrorist group, banned in Russia) illegal.

"NRF considers the announcement of the Taliban’s caretaker cabinet illegal and a clear sign of the group’s enmity with the Afghan people. We call on all Afghan citizens to continue their resistance against the occupation by the Taliban and its terrorist allies," the statement read.

20:22 GMT 07.09.2021
Ex-Afghan Health Minister Fears Healthcare Collapse
MOSCOW (Sputnik) - The Afghan health system is on the verge of collapse after the Taliban (terrorist organization, banned in Russia) takeover of the country, Wahid Majrooh, who served as the health minister under ex-President Ashraf Ghani, told The Telegraph.
Hundreds of hospitals have shut down due to the shortages of fuel, food and medicine. Health workers have not been paid salaries for the last 3-5 months, he added.

"You see a running, resilient system close to collapse and it's very, very painful," Majrooh said.

"The operation to move out of danger and to safety tens of thousands of Afghans at risk, including many who helped us during our two decades in Afghanistan, represents an extraordinary military, diplomatic, security, and humanitarian operation by the US Government," Young said in a White House statement. "We urge Congress to appropriate $6.4 billion to enable the success of this multifaceted, historic mission."

“Together with Secretary… Blinken, Secretary Austin thanked [Qatari Amir Sheikh Tamim bin Hamad ] Al Thani for Qatar’s extraordinary support in facilitating the safe transit of US citizens and Afghans and other individuals at risk from Afghanistan,” Kirby said in a statement following their meeting in Doha on 6 September.

Both US secretaries affirmed the strength of the bilateral strategic partnership and discussed a range of other issues related to regional security and stability, he added.

“In both meetings, Secretary Austin and Secretary Blinken underscored US commitment to a strong and enduring partnership with Qatar and their desire to continue close coordination on initiatives to advance regional peace and stability,” Kirby noted.

They also met with US service members, diplomats and other staff along with Afghan evacuees who supported US government operations in Afghanistan, he added.
13:48 GMT 07.09.2021
Panjshir Resistance Front Says Anti-Pakistan Protests in Kabul Inspired by Leader Massoud
MOSCOW (Sputnik) - The massive demonstration of Kabul residents against Pakistan's alleged meddling in Afghan domestic affairs on 7 September was sparked by the call of Panjshir resistance leader Ahmad Massoud, National Resistance Front of Afghanistan (NRFA) spokesman Ali Nazary said.

The Kabul demonstration occurred shortly after the Pakistani intelligence chief, Faiz Hameed, arrived in the Afghan capital at the invitation of the Taliban (terrorist organisation banned in Russia). Taliban fighters reportedly fired warning shots to disperse the hundreds-strong crowd.

"More courageous women and men of Kabul joined the general uprising declared by [Ahmad Massoud] today. They are demanding freedom, justice, and the independence of Afg. after 20 years, this resistance and revolution will put an end to aggression once and for all," Nazary wrote in message posted on Twitter.

Panjshir was the only Afghan province to resist the Taliban before it was conquered on 7 September. The NRFA vowed to retreat into guerrilla warfare, while Massoud called on Afghans to rebel against the Taliban, and accused unidentified "foreign forces" of supporting the radical movement.
13:46 GMT 07.09.2021
Russia Will Not Take Part in Upcoming Ministerial Meeting on Afghanistan
MOSCOW (Sputnik) - Russia will not be participating in the ministerial meeting on Afghanistan scheduled on 8 September, the Foreign Ministry told Sputnik on 7 September.

Earlier in the day, Italian Foreign Minister Luigi Di Maio said that the meeting will be chaired by US Secretary of State Anthony Blinken.

"Russia will not take part in the ministerial meeting on Afghanistan on September 8," the ministry said.
12:10 GMT 07.09.2021
Taliban Ready to Have Relations With US, Welcomes Participation in Afghan Reconstruction

Afghanistan
Taliban Ready to Have Relations With US, Welcomes Participation in Afghan Reconstruction
11:40 GMT 07.09.2021
Taliban Spokesman Denies Reports About Plans to Introduce Restrictions on Social Media
MOSCOW (Sputnik) - The Taliban movement (banned as a terrorist organisation in Russia) has no plans to introduce any restrictions on social media in Afghanistan, it believes in the freedom of speech and is ready to accept criticism, and will only make effort to limit the spreading of fake information, Taliban spokesman Suhail Shaheen told Sputnik on 7 September.

"No, there aren’t any restrictions on social media. We believe in the freedom of speech. If someone criticizes our activities or has some views that he wants to express, it is fine with us, it is all part of freedom of speech. But of course we do not want the spread of lies and fabrications, those might be restricted. Otherwise, we don’t have any problem," Shaheen said.
11:39 GMT 07.09.2021
Taliban Spokesman Hopes New Afghan Gov’t to Be Announced This Week
MOSCOW (Sputnik) - Suhail Shaheen, a spokesman for the Taliban (terrorist organisation, banned in Russia) told Sputnik on 7 September that he hopes that the new Afghan government will be announced this week.

“I hope that it would be this week but I don’t know exactly. It could be this week or the next,“ Shaheen said.
11:21 GMT 07.09.2021
State Department Officials ‘Flat Out Lie’ About Helping Americans in Afghanistan, Reports Suggest

Afghanistan
State Department Officials 'Flat Out Lie' About Helping Americans in Afghanistan, Reports Say
11:19 GMT 07.09.2021
Kremlin Says No Decision on Taliban Recognition Made Yet
MOSCOW (Sputnik) - Russia did not yet make any decisions on recogniыing the Taliban (banned in Russia) as it is important to understand if they fulfill their promises, Kremlin spokesman Dmitry Peskov said on 7 September.

The militant movement reportedly sent Russia, China, Turkey, Iran, Qatar and Pakistan invitations to attend an event dedicated to the announcement of the new Afghan government.

"You know that so far no decisions have been made on the recognition of the Taliban. In addition, you also know that indeed we are very carefully monitoring everything that is happening there, and most importantly, we are still trying to understand how the promises of the Taliban, their statements, will correlate with their future actions," Peskov told reporters.
11:12 GMT 07.09.2021
Italy Discusses Opening Joint Mission in Afghanistan With Other Countries
ROME (Sputnik) - Italy is discussing with other countries opening a joint representative office in Afghanistan, led by the European Union or the United Nations, Foreign Minister Luigi Di Maio said on 7 September.

“After the temporary closure of most of the embassies [in Kabul], we decided to move our embassy to Doha as a diplomatic office, as countries such as the US, UK, Germany, Canada have done and the Netherlands and Spain will do in the future. Together with the countries of the region and with our partners, who have already deployed their missions for Afghanistan in Qatar, we are thinking about creating a joint presence in Afghanistan,” the minister told Italian lawmakers.

Di Maio added that such a joint mission “with predominantly consular functions” could be led by the EU or possibly by the UN.
Newsfeed
0
Access to the chat has been blocked for violating the rules . You will be able to participate again through:∞. If you do not agree with the blocking, please use the feedback form
The discussion is closed. You can participate in the discussion within 24 hours after the publication of the article.
To participate in the discussion
log in or register
loader
Chats
Заголовок открываемого материала