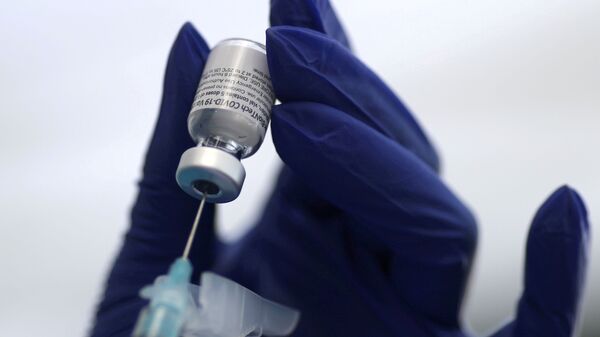 Live Updates: US to Proceed Only With Pfizer COVID-19 Booster Shots, Reports Say

The global coronavirus death toll has topped 4.552 million, while over 219.7 million cases of the infection have been detected, according to Baltimore, Maryland's Johns Hopkins University, which tracks and compiles data from national and local authorities, the media and other sources.
The US is still the most-affected nation amid the pandemic; over 39.8 million have been infected and the death toll exceeds 647,000. Next is India, with over 32.9 million confirmed cases and more than 439,000 deaths; they are followed by Brazil, with 20.8 million confirmed cases and over 582,000 fatalities.
The European Union and UK-Swedish pharmaceutical giant AstraZeneca have agreed to end litigation over the execution of the advance purchase agreement, reaching a deal on the delivery of the remaining COVID-19 vaccine doses to the bloc.
The White House will unveil its latest strategy to manage the Delta variant of coronavirus next week, President Joe Biden said, as the United States experiences a fresh spike in COVID-19 infections and hospitalisations despite the vaccination of more than half its population.
Follow Sputnik’s feed to find out more.
Table of contents
Mexico Reports Over 15,000 New COVID-19 Deaths
Some 142,000 People Protested Across France Against Mandatory COVID-19 Passes - Reports
Japan to Extend COVID-19 State of Emergency in Tokyo Area, Reports Say
Romania Registers 1,586 New Coronavirus Cases
Around 140 People in South Korea Possibly Administered Expired Pfizer Vaccines, Reports Say
Thailand Registers 15,942 New COVID-19 Cases
UAE Detects 984 New Coronavirus Cases
Ethiopia Registers 1,354 New COVID-19 Cases
Bahrain Allows Sputnik Light To Be Used As Booster Shots, RDIF Says
Philippines Reports 20,741 New COVID-19 Cases
Kimi Raikkonen Tests Positive for COVID-19 Ahead of Dutch GP
Russia Records 18,780 New Coronavirus Cases in Last 24 Hours
Mexican Health Ministry Says Will Soon Lift Highest Level of COVID Threat in All Regions
Cuba Starts COVID-19 Vaccinations for Children
Ukraine Detects 2,614 New COVID-19 Cases
Philippines to Lift Coronavirus Travel Ban on 10 Countries Including UAE
Number of COVID-19 Cases in India Rises by 42,618 Over Past 24 Hours
US to Proceed Only With Pfizer COVID-19 Booster Shots, Reports Say
New firstOld first
22:20 GMT 04.09.2021

Latest data released by Mexico's health ministry on Saturday has indicated that the nation reported some 15,586 new COVID-19 cases and approximately 647 more deaths.

The country was rocked by protests by the eights Saturday in a row, with over 18,000 having protested in Paris alone.

One of the protests in the French capital was organized by Florian Philippot, the leader of the right-wing Patriots party, and began at the Champ de Mars park near the Eiffel Tower.

Another protest was held at the Place du Chatelet. According to the broadcaster, three people there were arrested for violence and insulting law enforcement officers.

In July, French President Emmanuel Macron announced a series of new restrictions to contain the spread of COVID-19, including a special health pass indicating that a person has either been vaccinated or has a negative test result for COVID-19.

At the end of last month, the pass was already required in museums, theaters, movies and all public events attended by over 50 people. Starting August 9, it became mandatory in restaurants, bars, shopping centers, airplanes and long-distance trains.

Last Saturday, a total of almost 160,000 people voiced their objections across France.

Staff at the Korea University Guro Hospital had inoculated around 140 people with shots that may have expired or have come close to their expiration dates after being unfrozen for use from 26 to 27 August, the health officials told Yonhap.

Some of the individuals who had received these shots returned to the hospital in the following days with complaints for abnormal reactions.

The Korea Disease Control and Prevention Agency has expressed its concern that the vaccines may not have the declared efficacy and is considering the possibility of re-vaccinating.

On 24 August, South Korea has extended the social distancing measures for another two weeks amid a spike in COVID-19 cases. The country has fully vaccinated 17.5 million people which amounts to 33.8% of the total population.

BREAKING | RDIF: The Kingdom of Bahrain officially authorized the use of the one-shot Sputnik Light vaccine as one of the two possible boosters in the national booster program. 👇https://t.co/teD1HvXOoY

Bahrain has greenlighted the use of Russia's single-dose coronavirus vaccine Sputnik Light as a booster shot in its re-immunization campaign, the Russian Direct Investment Fund (RDIF) said on Saturday.

"The Kingdom of Bahrain will use the Sputnik Light drug as a booster shot as part of its national re-vaccination campaign," the RDIF wrote on its Telegram channel.

The single-dose Sputnik Light vaccine is based on the first component of the two-dose Sputnik V, on the recombinant human adenovirus serotype number 26 (rAd26) vector. It has proven effective against all new strains of the coronavirus, with no serious side effects registered following the inoculation.

The biggest number of new cases was recorded in Moscow —1,549; the second largest in St. Petersburg with 1,494; and the third largest in the Moscow Region with 756.

In the same 24 hours, 796 deaths of patients with coronavirus were confirmed and 18,737 recoveries.

The Mexican Ministry of Health has updated the levels of epidemiological danger for all regions amid the weakening third wave of the COVID-19 pandemic, with the level of threat set to be lowered from maximum across the country in two weeks.

"From 6-19 September, there will be no federal state in the red zone with the highest risk: two will be in the green zone, 13 in the yellow and 17 in the orange [zones]," the ministry said in a statement late on Friday.

Tourist destinations, such as the states of Quintana Roo and Yucatan, as well as several central states, will remain among the zones with a high level of epidemiological risk.

To date, 65% of the adult population of the country, or nearly 58.5 million people, have received at least one dose of COVID-19 vaccines, while 35 million received both injections.

According to the latest figures provided by the ministry, some 3.4 million infections have been registered since the outbreak of the pandemic, including 262,221 fatalities.

India has confirmed 42,618 new cases of the coronavirus over the past 24 hours, with the total number of those infected having reached 32,945,907, the country's Ministry of Health and Family Welfare said on Saturday.

The death toll from the disease has reached 440,225 people, with 330 new fatalities being recorded over the past day.

More than 32.1 million people have recovered in India since the start of the outbreak.