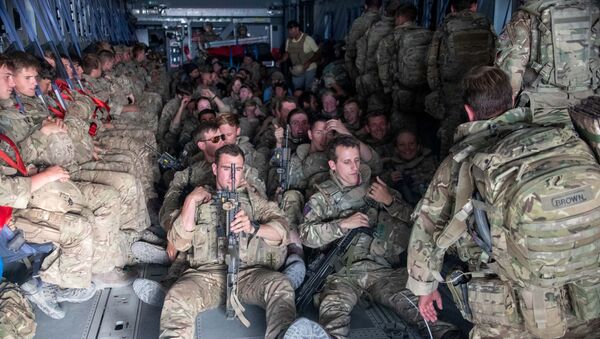 On 15 August, the Taliban* entered Kabul, prompting the Western-backed government to collapse and Afghan President Ashraf Ghani to flee to the UEA. The seizure of power has forced thousands of Afghans to try to escape from the country out of fear of reprisals from the militants.
Foreign troops are under pressure to wrap up the evacuation by 31 August, as the Taliban has warned it would not extend the deadline for the withdrawing forces even in light of Thursday's deadly suicide bombing at Kabul Airport. At the same time, the Taliban has said it would allow the evacuation of civilians to continue beyond 31 August.
On Thursday, several explosions targeted Kabul Airport and its periphery, killing 13 US troops and some 170 civilians. The Daesh-K* terror group claimed responsibility for the attacks, prompting a retaliatory US drone strike.
Follow Sputnik’s feed to find out more.
*The Taliban and Daesh-K are terrorist groups outlawed in Russia and many other countries.
Table of contents
Macron Says Evacuation Dialogue With Taliban Does Not Mean Recognition
Taliban Reportedly Says Male, Female Students to Study Separately
Taliban Agreed That All Foreign Nationals, Afghans With Visas Will Be Able to Leave, UK Says
Turkey Supports the Idea of Creating a 'Security Zone' Under UN Control in Kabul
Videos Emerging Online Showing Aftermath of Powerful Blast in Kabul
Another Explosion Hits Kabul
President Biden en Route to Dover Air Base to Receive Bodies of US Servicemen Killed in Thursday's Kabul Attacks
Taliban Supreme Leader Meeting With Movement's Other High-Ranking Members, Source Says
Taliban Reportedly Turns Off Internet in Panjshir, Only Afghan Province Controlled by Resistance Forces
US Congressman Moulton Shocked by Evacuation Conducted by Washington in Afghanistan
Taliban Reportedly Announces Resumption of Athletic Activities in Afghanistan
'Taliban's Brutality Continues', Ex-Afghan Interior Minister Says
Last Plane With UK Soldiers Returns From Afghanistan, Reports Say
Afghan Banking Authority Orders Private Banks to Limit Withdrawal of Funds, Reports Say
Taliban, US Aim For Swift Handover of Kabul Airport, Taliban Official Says
All US Diplomatic Staff 'to Be Taken Out of Afghanistan by 31 August'
New firstOld first
18:42 GMT 29.08.2021

Speaking on TF-1 evening news show, French President Emmanuel Macron said that discussions his country is having with the Taliban about the evacuation of French nationals and Afghans in danger do not mean recognition of the group as Afghanistan's new authorities.

"...We have to have these discussions from a practical point of view. This does not mean there will be recognition. We have set conditions," Macron said.

Speaking at a higher education conference in Kabul, Haqqani said that girls had the right to education but cannot study in the same classrooms with boys.

He also vowed that universities would soon reopen and that teachers and the ministry staff would be paid salaries.

Women's rights under the Taliban remain an issue of concern. Earlier in August, the Islamist movement said that women would be allowed to study and work as well as take part in governmental activities. On Tuesday, the Taliban said that female state officials would be able to resume their work after necessary regulations are worked out.

However, according to the United Nations and media reports, the movement has already forbidden women in several parts of Afghanistan to work or leave their homes without being accompanied by a male relative.

French President Emmanuel Macron said on Saturday that Paris and London would be holding talks on Monday to discuss the creation of a "safe zone" in the Afghan capital to allow for humanitarian operations to continue.

"We receive interesting proposals from France on sending peacekeepers to Afghanistan. ... If such forces are created, they should be formed by the UN with the participation of different countries," Cavusoglu said at a joint press conference with his German counterpart, Heiko Maas, who is visiting Turkey.

US President Joe Biden was heading to Dover Air Base on Sunday to receive the bodies of 13 US servicemen killed in a suicide bomb attack near Kabul airport on Thursday.

Families of those troops are also expected to attend the ceremony.

The Taliban (a terrorist group, banned in Russia) have cut off telephone lines and internet services in Panjshir province, the last remaining hotbed of resistance in Afghanistan, to block the internal communications between the resistance forces formed after the militants took over the rest of the country in mid-August, national media reported on Sunday.

The Raha Press news agency reported that the Taliban were trying to prevent Afghan Vice President Amrullah Saleh, who declared himself caretaker president, from sharing his messages on Twitter.

Other Afghan media reported, citing sources, that the radical group was exerting "psychological pressure" on Panjshir, as it believes attacking the valley would be easier with the lack of communication.

On Saturday, the Russian Ambassador to Kabul Dmitry Zhirnov said that the Taliban could take over the Panjshir province within hours but wanted to avoid bloodshed.

US Congress member Seth Moulton said that the actions of the United States in Afghanistan had shocked him, as the evacuation should have been started earlier.

Moulton visited Kabul on Tuesday without informing the authorities. The risky trip was condemned by the departments of state and defence.

"There's one very simple order, which would have been to start this evacuation months ago," the official told the Axios news portal.

The official also criticized the US decision to vacate the Bagram military airbase — its key base in Afghanistan — in July.

"Why on earth would you give up our primary airfield when you know we have to evacuate tens of thousands of people? It just blew my mind," Moulton commented.

The United States would have failed to fly "thousands" of people out of Afghanistan, even if they had remained in the country till September 11, as it was initially planned, according to the congressman, because the evacuation started too late.

On Sunday, US officials told The Washington Post that US President Joe Biden was planning to evacuate all the diplomatic mission by Tuesday. About 2,000 people were airlifted by the US and coalition forces within the past 12 hours, according to the White House.

The Taliban (a terrorist group, outlawed in Russia) has announced that sports activities will resume in Afghanistan, Afghan broadcaster 1TV reported on Sunday.

The precise date of the resumption is unknown yet.

The Taliban takeover of Afghanistan has upended life in the Central Asian country, including sports. This, however, does not mean the country has nothing to report sports-wise as two Afghan athletes, Zakia Khudadadi and Hossain Rasouli, arrived on Saturday in Tokyo to participate in the 2020 Paralympic Games. The athletes were evacuated from Afghanistan last weekend and spent a week in Paris until departing for Tokyo.

The last plane from Afghanistan with UK troops on board has landed in the United Kingdom, Sky News reported on Sunday.

The UK Ministry of Defence announced earlier that the plane had departed from Kabul airport.

Now the aircraft has arrived at the Brize Norton airbase, according to the UK broadcaster.

The central bank of Afghanistan has instructed the country's private banks to resume their operations while limiting withdrawal of funds to $200 a week per person, Afghan Khaama Press news agency reported on Sunday, citing the central bank's directive.

The country's banking system has been shut down since the Taliban (a terrorist group, banned in Russia) seized power in the middle of the month. The ensuing financial difficulties prompted a Saturday protest in Kabul against the closure of banks.

According to the news agency, the withdrawal limit also applies to international banks and will be a temporary measure.

"We are waiting for the final nod from the Americans to secure full control over Kabul airport," Taliban official said on condition of anonymity.