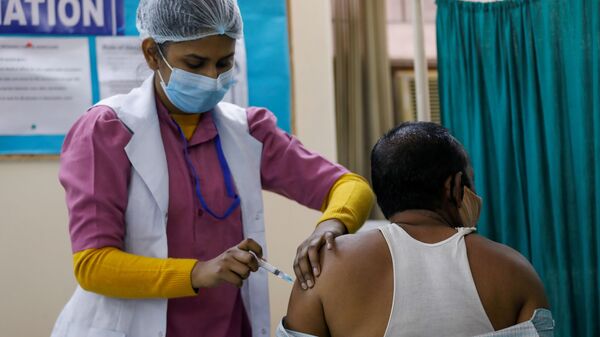 Subscribe
The global death toll from COVID-19 has surpassed 4.462 million and over 213.8 million cases of the virus have been registered, according to Johns Hopkins University, which tracks and compiles data from state and local authorities, the media and other sources.
The US is still the most-affected nation amid the pandemic; over 38.2 million have been infected, and the death toll exceeds 632,000. Next is India, with over 32.5 million confirmed cases and more than 435,000 deaths; followed by Brazil, with 20.6 million confirmed cases and over 576,000 fatalities.
The head of the World Health Organization (WHO) reiterated his call to suspend the administration of booster shots against COVID-19, so that countries with a lower immunisation rate could vaccinate their citizens.
The global coronavirus infection rate flatlined last week after consistently growing for two consecutive months, but remains high, WHO chief Tedros Adhanom Ghebreyesus said.
Follow Sputnik’s feed to find out more.
Table of contents
Number of COVID-19 Cases in Brazil Rises by 31,024 to Over 20.67Mln – Ministry of Health
Approval of COVID-19 Vaccines For Children May Be Approved This Year - US Surgeon General
Russia Registers 5th Homegrown COVID-19 Vaccine, EpiVacCorona-N
Spanish Pharma Firm Opens Probe Into Contaminated Moderna Vials Sent to Japan
EU Commission Disburses $2.6Bln to Germany From Post-Pandemic Recovery Fund
EU Digital COVID-19 Certificate Wins Backing as Global Standard, Airline Trade Group Says
Hundreds of Medical Workers in Athens Rally Against Mandatory COVID-19 Vaccination
Indonesia Detects 16,899 New Coronavirus Cases
Brazil's Eurofarma to Make Pfizer COVID-19 Shots For Latin America
Malaysia Reports 24,599 New COVID-19 Cases
Iran Detects 39,983 New COVID-19 Cases
Belarus Registers 1,551 New Coronavirus Cases
Pfizer Booster Dose Proves 95% Effective in Israel, Reports Say
Israel Detects 8,800 New COVID-19 Cases
Pakistan Reports 4,553 New COVID-19 Cases
Russia Records 19,630 COVID-19 Cases in Past 24 Hours
Georgia Detects 4,128 New Coronavirus Cases
Mongolia's COVID-19 Tally Exceeds 200,000
Number of COVID-19 Cases in India Rises by 46,164 Over Past 24 Hours
New firstOld first
22:53 GMT 26.08.2021
Number of COVID-19 Cases in Brazil Rises by 31,024 to Over 20.67Mln – Ministry of Health

According to the ministry, the death toll has risen by 920 to 577,565 people within the same period of time.

More than 19.6 million patients have recovered since the start of the outbreak.

WASHINGTON (Sputnik) - COVID-19 vaccines for children under the age of 12 may be approved this year, if everything went well, US Surgeon General Vivek Murthy said Thursday.

“Trials under way for kids under 12 have to be completed and the data has to be analyzed by the [drug-making] companies in their applications, and submitted to the Food and Drug Administration,” Murthy told a live-streamed event. “The FDA, I know, will work at breakneck speed to get that assessment done because the vaccines for COVID-19 are the top priority for the FDA and they will put that on top of their list."

He added that in ideal circumstances, vaccines for children would be approved before the year is out.

"If everything worked out well in an ideal scenario, could we have a vaccine for kids under 12 before the end of the calendar year? It's possible we could, but again all of that has to go right."

The FDA gave full approval on Monday to the Pfizer-BioNTech COVID vaccine for those aged 16 and above, and is expected to study next doses for children who are 12 and below.

"EpiVacCorona-N. A vaccine based on peptide antigens for the prevention of COVID-19. Date of state registration: August 26, 2021," the document read.

In its vaccination drive, Russia is using Sputnik V and three other homegrown vaccines — CoviVac, EpiVacCorona, and Sputnik Light.

Spain's ROVI pharmaceutical firm, which is manufacturing Moderna’s COVID-19 vaccine, opened an investigation on Thursday to determine how vials of the vaccine sent to Japan were contaminated with foreign particles.

"There have been no problems until now. It is an isolated case. We are conducting an investigation," a ROVI spokesperson told Spanish news website Finanzas.

US vaccine maker Moderna is reportedly conducting a parallel investigation.

The Japanese Health Ministry said on Thursday it had halted the use of 1.63 million Moderna doses from three lots produced at ROVI’s manufacturing site in Spain.

Japan's NHK broadcaster cited the ministry as saying that the contaminants were magnetic and appeared to be metallic particles. No safety issues linked to the three lots have been observed.

The European Commission paid out on Thursday the first 2.25 billion euros ($2.6 billion) to Germany from the EU-wide fund allocated to support member states during the coronavirus crisis.

"The European Commission has today disbursed €2.25 billion to Germany in pre-financing, equivalent to 9% of the country's financial allocation under the Recovery and Resilience Facility (RRF). This corresponds to the pre-financing amount requested by Germany in its recovery and resilience plan," the Commission said in a statement.

The money is expected to be spent on projects promoting a green economy, digitization, and economic and social resilience.

The RRF was agreed upon by European leaders in July 2020 as part of NextGenerationEU, a temporary recovery instrument designed to mobilize investments and jump-start Europe's economy, battered by the COVID-19 pandemic.

The Facility has a budget of 723.8 billion euros to support green reforms and innovation projects in EU member states. Before allocating the funds, the Commission reviews recovery plans presented by member states based on country-specific recommendations and assesses whether they dedicate at least 37% of expenditure to climate objectives and 20% to the digital transition.

A digital COVID-19 vaccination certificate developed by the European Union provides a model for other nations to facilitate travel and ensure other benefits such as access to entertainment, the International Air Transport Association (IATA) said Thursday.

"The EU Digital COVID Certificate (DCC)… should serve as a blueprint for other nations looking to implement digital vaccination certificates," the IATA said in a press release.

The EU’s DCC is accepted in the bloc’s 27 member nations, and reciprocal agreements have been agreed with other states’ own vaccination certificates, including Switzerland, Turkey, and Ukraine, the release said.

"In the absence of a single global standard for digital vaccination certificates, up to 60 other countries are looking to use the DCC specification for their own certification," the release added.

With the latest pandemic surge fueled by the delta variant, many US jurisdictions now require patrons of restaurants, concert halls and other entertainment venues to show proof of vaccination or a negative COVID-19 tests in recent days.

The release included an offer from the IATA to aid any interested nation to integrate the DCC into pandemic-mitigation measures adopted by their airlines.

Hundreds of hospital employees staged a rally outside the health ministry in Athens on Thursday to protest compulsory COVID-19 vaccination for certain groups, a Sputnik correspondent reported.

Last month, the Greek government added employees in some specific sectors, such as healthcare, to the list of those obligated to get vaccinated against the coronavirus due to a surge in COVID-19 infections. The country has since witnessed several rallies against the policy.

Greece's union of public hospital employees, POEDHN, declared a general strike from 10 a.m to 3 p.m (from 07:00 to 12:00 GMT) on Thursday, calling on all staffers across the country to take to the streets.

According to police estimates, the rally in the capital gathered some 700 people and included not only medical workers but also their supporters.

"We are not against vaccination, we are against compulsory vaccination," one of the ambulance workers told Sputnik. The employee noted that he had already received both shots.

The participants also opposed measures used to force them to get the injection — those who have not got vaccinated are suspended from work.

The protesters asserted that the government was misleading the public, creating an illusion that those immunized are fully protected against the coronavirus, which is not true, as everyone can be a virus carrier.

POEDHN representatives, in turn, announced that they had sent a request to the Hellenic Council of State, Greece's supreme administrative court, to cancel the government's decision on compulsory vaccination.

Following the rally, a group of protesters, accompanied by ambulance sirens, marched toward the prime minister's residence.

A third shot of the Pfizer vaccine is 95% effective against the coronavirus and has 97% efficacy against severe symptoms, Israel’s Channel 12 reported on Thursday, citing the health ministry.

Vaccine efficacy rose to 86% a week after the inoculation with a third shot, and to 95% in 16 days, the broadcaster said.

Over 1.6 million people have received a booster Pfizer dose in Israel, according to official figures. On Monday, the health authorities expanded the COVID-19 booster vaccination to those over 30 years old.

On July 30, Israeli President Isaac Herzog and his spouse, Michal Herzog, became the first citizens of the country to get booster shots. Some 58% of Israel’s 9.3 million population have been vaccinated with two shots of the Pfizer/BioNTech vaccine so far. The immunization drive among adolescents aged 12-15 was launched in June.

The response centre reported 820 new deaths linked to the coronavirus, up from 809 the day before, raising the country's death toll to 179,243.

India has confirmed 46,164 new cases of the coronavirus over the past 24 hours, with the total number of those infected having reached 32,558,530, the country's Ministry of Health and Family Welfare said on Thursday.

The death toll from the disease has reached 436,365 people, with 607 new fatalities being recorded over the past day.

More than 31.78 million people have recovered in India since the start of the outbreak.