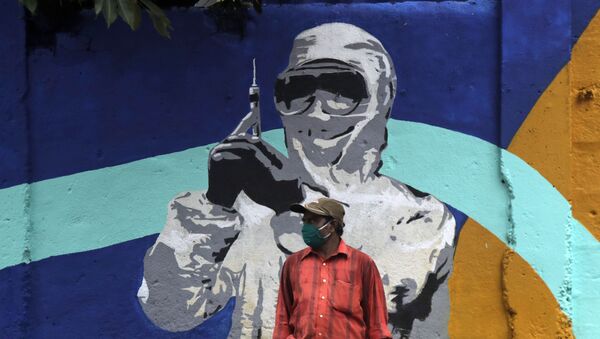 Subscribe
According to Baltimore, Maryland's Johns Hopkins University, the global coronavirus tally has reached 200 million worldwide, while the death toll from the pandemic has topped 4.26 million.
The list of the most affected nations starts with the US, India, and Brazil. The United States has confirmed over 35.4 million cases so far, and a death toll of over 615,000. Next is India, reporting around 31.8 million cases and over 426,000 deaths. At the same time, Brazil has registered over 20 million cases and the second-highest death toll in the world - around 560,500 fatalities.
Follow Sputnik's Live Feed to Find Out More!
Table of contents
US Reaches Milestone as 50% Americans Fully Vaccinated Against Coronavirus
Antibodies Produced by COVID-19 Remain Effective for 7 Months, Study Says
China to Provide 1Mln Doses of Vaccines to Afghanistan in Near Future
Daily Covid Cases Slightly Rise in UK
Delta Strain Most Dangerous for Pregnant Women, Scientist Claims
United Airlines Requires All Employees Get Vaccine Against COVID-19 by October 25
Amid Vaccine Shortage, India May Get Another COVID Jab - NOVAVAX
French Health Pass to Be Instrumental in Fighting Fourth Wave of COVID-19
France Reaches Plateau in New COVID-19 Cases - Government
China Locks Down City of Zhengzhou Amid Surging COVID-19 Outbreak
Tokyo Registers 29 New COVID-19 Cases at Olympics Within 24 Hours
Russia Records 22,660 COVID-19 Cases in Past 24 Hours
Finland Starts Vaccinating 12-Year-Olds, Okays COVID Pass Amid Spike in Infections
Swedish Prof Doesn't Rule Out a Fifth COVID Shot
Texas GOP Official Dies From COVID, Less Than a Week After Publishing Anti-Vaxx Sentiments
Danish Gov't Pins Failure to Limit Share of Non-Western Students by 30 Percent on COVID-19
New firstOld first
18:02 GMT 06.08.2021
US Reaches Milestone as 50% Americans Fully Vaccinated Against Coronavirus

The United States has reached a milestone in that a half of the country’s residents of all ages have been fully vaccinated against the novel coronavirus, White House COVID-19 Data Director Cyrus Shahpar said on Friday.

"Friday just in: +821K [821,000] doses reported administered, including 565K [565,000] newly vaccinated. Seven-day average of newly vaccinated is up 11 percent from last week and 44 percent over past two weeks. 50 percent of Americans (all ages) are now fully vaccinated," Shahpar said via Twitter.

The United States leads the world in the number of vaccinations as well as new coronavirus cases as the more transmissible Delta variant has become the predominant strain in the country and the world.

Over the past seven-day period, an average 700,000 doses have been administered daily in the United States, while the number of new coronavirus cases has increased by 43 percent to about 90,000 cases per day.

Immunoglobulin G (IgG) antibodies against the SARS-Cov-2 virus are preserved or even multiplied for seven months after infection, a study led by the Barcelona Institute for Global Health (ISGlobal) found.

"The levels of IgG antibodies against SARS-CoV-2 Spike protein remain stable, or even increase, seven months after infection," the institute said.

The study involved 578 people under 65 years who had COVID-19 with either mild or no symptoms. For seven months after the illness, blood samples were taken from them, measuring the level of IgA, IgM, or IgG antibodies, as well as the presence of antibodies against the four coronaviruses that cause common colds in humans.

"Rather surprisingly, we even saw an increase of IgG anti-Spike antibodies in 75% of the participants from month five onwards, without any evidence of re-exposure to the virus," co-author Gemma Moncunill said.

The study found that the amount of antibodies remains stable regardless of age and gender.

Moreover, the research demonstrated that antibodies against human cold coronaviruses (HCoV) could also protest from COVID-19. People with distinct COVID-19 symptoms were found to have lower HCoV antibody titers, and vice versa.

“China has actively supported the Afghan government in fighting the pandemic; 700,000 doses of COVID-19 vaccines, ventilators and anesthesia machines and other medical supplies arrived in Kabul not long ago. We will provide an additional one million doses of vaccines in the near future,” Bing said.

The United Kingdom has reported 31,808 new coronavirus cases on Friday, a slight increase on the 30,215 recorded a day before.

"These women are not vaccinated and do not have any underlying diseases. Still they have a severe form of the virus," Bloemenkamp told the Dutch daily Algemeen Dagblad.

In the Netherlands, more pregnant women were hospitalized during the spread of the Delta strain than during the previous COVID-19 strains, according to the professor. When a woman whose pregnancy is going well becomes infected with the coronavirus, her condition suddenly and quickly worsens, with little else but for her to be connected to a ventilator, the professor explained.

"I think women should decide for themselves whether to get vaccinated or not, but they should be well informed and aware of the consequences of their refusal to vaccinate," Bloemenkamp added.

In July, the Delta strain, which is associated with more severe symptoms, accounted for the majority of COVID-19 infections in most European countries, prompting new restrictions. The Delta variant was first detected in India in October 2020, with three sub-variants discovered since. This strain is said to be as contagious as chickenpox and 40%-60% more transmissible than other COVID-19 variants.

United Airlines has become the first US air carrier to require all its employees to get a vaccine against the coronavirus by October 25 amid growing infections with the Delta variant, United CEO Scott Kirby and President Brett Hart said in a staff memo on Friday.

“We know some of you will disagree with this decision to require the vaccine for all United employees,” the memo said. “But, we have no greater responsibility to you and your colleagues than to ensure your safety when you’re at work, and the facts are crystal clear: everyone is safer when everyone is vaccinated.”

United Airlines is the first US air carrier to mandate all its 67,000 employees to provide documentary proof they are fully vaccinated in order to keep their jobs while about 90 percent of United pilots and 80 percent of flight attendants have already been vaccinated, according to a report by CNBC.

United is not the first US company that has introduced stricter rules with respect to the vaccination against COVID-19. On Thursday, CNN fired three employees for coming to the company's offices without being vaccinated and postponed employees' return to the office to the middle of October.

On Friday, the Serum Institute of India (SII) applied to the Central Drug Standard Organisation for Emergency Use Authorisation (EUA) for the Novavax vaccine.

US-based Novavax Inc has a vaccine manufacturing agreement with SII, which manufactures the Covishield vaccine. The latter is currently being administered in India.

Aside from India, the vaccine manufacturer has asked Indonesia and the Philippines to allow emergency use of its COVID-19 vaccine, called Covovax.

PARIS (Sputnik) - The updated sanitary pass in France will become the main tool in the fight against the fourth wave of the coronavirus, spokesman for the French government Gabriel Attal said Friday.

On Thursday, the French Constitutional Council supported the extension of the sanitary pass, which indicates a vaccination or a negative COVID-19 test for visiting cafes, restaurants, and shopping centres.

"We have been seeing a form of a plateau on the national level for several days... today there is no stable decline. The pandemic keeps spreading quickly across the country", Attal said in a televised statement to the national BFM TV broadcaster, adding that the fourth wave is hitting hospitals across the country.

MOSCOW (Sputnik) - The city of Zhengzhou in central China’s Henan province has been placed under complete lockdown, the local government said on Friday.

All the residential neighbourhoods in Zhengzhou will be under strict lockdown and local residents would only be allowed to go out with a green health code and have to subject to routine temperature checks, the local government’s COVID-19 containment command centre said in a directive.

According to the directive, for residents living in neighbourhoods designed as “mid-high-risk areas,” one person from each household would be allowed to go out to buy life necessities once per day.