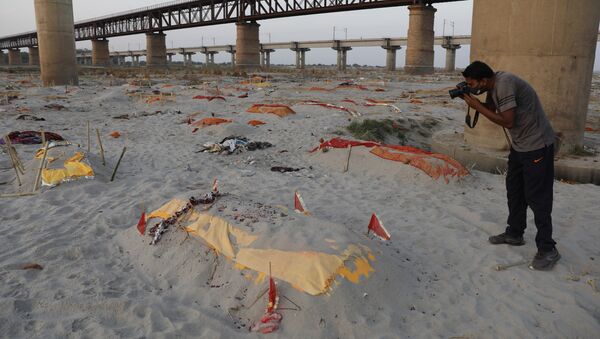 Subscribe
The total number of COVID-19 cases stands at over 195 million globally, while the death toll has surpassed 4.1 million worldwide, according to Baltimore, Maryland's Johns Hopkins University, which tracks and compiles data on the pandemic.
The list of the most-affected nations starts with the United States, India, and Brazil. The US has confirmed over 34.6 million cases so far, and a death toll of 611,000.
Next is India, reporting around 31.4 million cases and over 422,000 deaths. At the same time, Brazil has confirmed around 19.8 million cases and the second-highest death toll in the world - over 553,500 fatalities.
Follow Sputnik's Live Feed to Find Out More!
Table of contents
Pharma Giants Charge Governments 5 Times Real Price of COVID Vaccines - Alliance
Forth COVID Wave Starts in Italy as Deaths Up by Nearly Half in One Week
Paris Calls UK’s Decision to Keep Quarantine for French Citizens ‘Discriminatory’
PM Modi One of the Most Followed Politicians in the World, Crosses 70 Million Twitter Followers
Restrictions on Restaurants', Shops' Opening Hours to be Lifted in Portugal
UK Reports 31,117 New Covid Cases
AstraZeneca Revenue From COVID-19 Vaccine Sales Amounts to $1.2Bln in First Half of Year
Japan Registers Record-High Coronavirus Spike, With 10,599 New Cases
EU's Von Der Leyen Meets Bloc's Advisory Panel on COVID-19 to Discuss Health Situation
Argentina Receives 500 Litres of Sputnik V 2nd Component's Active Substance
Australian Athletes Self-Isolating in Tokyo After Sam Kendricks Tests Positive for COVID-19
HHS Whistleblowers Claim They Were Told to Hide Real COVID Situation Among Migrant Minors in Texas
New firstOld first
18:37 GMT 29.07.2021
Pharma Giants Charge Governments 5 Times Real Price of COVID Vaccines - Alliance

The total cost of COVID-19 vaccination could have been five times less if the major pharmaceutical companies weren't taking advantage of their monopoly on COVID-19 vaccines, according to the People’s Vaccine Alliance.

"The cost of vaccinating the world against COVID-19 could be at least five times cheaper if pharmaceutical companies weren’t profiteering from their monopolies on COVID-19 vaccines. New analysis by the Alliance shows that the firms Pfizer/BioNTech and Moderna are charging governments as much as $41 billion above the estimated cost of production," the alliance said in a release.

Although the infection and death rates due to COVID-19 implications are rapidly growing in developing countries, the pharma giants have sold more than 90% of their COVID-19 vaccines to rich countries which overpay them as far as 24 times the actual price, the alliance went on.

Developing countries have low vaccination rates and the situation is getting worse, as the infections especially from COVID-19 Delta variant are rising. The inequalities become more obvious when statistics come into perspective. In the EU at the moment 57.8% of the population is vaccinated with at least one dose of the vaccine, according to European Center for Disease Prevention and Control. In the US this percentage is 56.8%, according to the Centers for Disease Control and Prevention. At the same time in very big developing countries with hundreds of millions of population those percentages are in single digits.

The forth wave of COVID-19 began in Italy, where the deaths rose by 46% in the course of one week, the Gimbe health foundation said on Thursday.

Last week, the Italian Council of Ministers announced the extension of emergency due to COVID-19 until December 31, introduction of health passes for indoor events and new criteria for color coding of the regions under the new COVID-19 measures package. The first COVID-19 state of emergency was declared in Italy on January 31, 2020.

Over 50% of the population older than 12 are fully vaccinated.

French Minister of State for European Affairs Clement Beaune said on Thursday that the United Kingdom’s decision not to exempt French citizens from obligatory quarantine upon arrival was discriminatory.

Earlier in July, London decided to cancel quarantine for fully vaccinated American and European travelers starting August 2. The restriction is still in place for French citizens, however.

"This is the decision that cannot be understood. It is not based on scientific facts. I suppose that this decision is discriminatory towards French people, because all [other] European countries, including even those with a more difficult sanitary situation than we have,… are not affected by this quarantine," Beaune said, as broadcast by the LCI broadcaster.

The minister said that the French foreign ministry is negotiating with their counterparts from the UK over this issue, and hopes the decision will be changed as soon as possible.

France is not planning any restrictive measures for tourists from the UK, Beaune specified.

Providing a negative PCR test or a document proving immunity against COVID-19 will be obligatory for those who arrive in Germany regardless of a country of departure or means of travel, Der Spiegel reported on Thursday, citing a draft order by the German Health Ministry.

Currently, these requirements are active only for airplane passengers. In addition, the rules depend on a country from which travelers arrive in Germany.

The newspaper said that the restrictions will be compulsory for all types of transport and countries of departure. Although the infection rate in Germany is low in comparison with others, traveling could negatively affect the situation, Der Spiegel specified.

According to the draft, which has not been approved yet, August 1 is the date of its entry into force.

Germany has so far registered 3.78 million COVID-19 cases and 91,709 deaths caused by the disease.

In the previous day, the United Kingdom has registered 27,734 cases.

MOSCOW (Sputnik) - The Anglo-Swedish drugmaker AstraZeneca increased its revenue by 23% to $15.54 billion in the first half of the year, of which $1.2 billion were obtained from the sale of their COVID-19 vaccine, the company said on Thursday in a financial report.

"Total revenue, predominantly comprised of Product Sales, amounted to $1,169 million in the half, reflecting the delivery of 319 million doses worldwide. Sales in Europe were $572 million, Emerging Markets sales were $455 million, and in Established RoW sales amounted to $109 Million", the company said.

MOSCOW (Sputnik) - European Commission President Ursula von der Leyen met with the EU Commission Advisory Panel on COVID-19 on Thursday to discuss the health situation in the region, urging everyone to get vaccinated.

"Today I met with the @EU_Commission Advisory Panel on #COVID19 to discuss the health situation in the EU, the rapid spread of the Delta variant and the perspectives for the autumn. We have to stay vigilant and get vaccinated", von der Leyen wrote on Twitter.

"Members of the Australian track and field team are now undergoing testing procedures in line with Australian Olympic team protocols," the AOC said in a statement.

HHS Whistleblowers Claim They Were Told to Hide Real COVID Situation Among Migrant Minors in Texas
000000
Popular comments
[ For USA ] I have made $16498 in one month by working at home. When I lost my office job 3 month ago, I was very upset and an unsuccessful try for a job hunt I was found this online job. and now I am able to earn thousands at home easily. Everybody can do this and earn money so easy. CHECK DETAILS ☛☛☛ W­­­w­­­w­­­.­­­P­­­a­­­y­­­s­­­9­­­9­­­.­­­C­­­o­­­m
ohwmaejmaircsa
29 July, 07:57 GMT
000000
Newsfeed
0
New firstOld first
loader
LIVE
Заголовок открываемого материала
Access to the chat has been blocked for violating the rules . You will be able to participate again through:∞. If you do not agree with the blocking, please use the feedback form
The discussion is closed. You can participate in the discussion within 24 hours after the publication of the article.
To participate in the discussion
log in or register
loader
Chats
Заголовок открываемого материала
Worldwide
InternationalEnglishEnglishMundoEspañolSpanish
Europe
DeutschlandDeutschGermanFranceFrançaisFrenchΕλλάδαΕλληνικάGreekItaliaItalianoItalianČeská republikaČeštinaCzechPolskaPolskiPolishСрбиjаСрпскиSerbianLatvijaLatviešuLatvianLietuvaLietuviųLithuanianMoldovaMoldoveneascăMoldavianБеларусьБеларускiBelarusian
Transcaucasia
ԱրմենիաՀայերենArmenianАҧсныАҧсышәалаAbkhazХуссар ИрыстонИронауОssetianსაქართველოქართულიGeorgianAzərbaycanАzərbaycancaAzerbaijani
Middle East
Sputnik عربيArabicArabicTürkiyeTürkçeTurkishSputnik ایرانPersianPersianSputnik افغانستانDariDari
Central Asia
ҚазақстанҚазақ тіліKazakhКыргызстанКыргызчаKyrgyzOʻzbekistonЎзбекчаUzbekТоҷикистонТоҷикӣTajik
East & Southeast Asia
Việt NamTiếng ViệtVietnamese日本日本語Japanese中国中文Chinese
South America
BrasilPortuguêsPortuguese
NewsfeedBreaking
03:48 GMTRobert E. Lee Statue Removed From Dallas Emerges at Private Texas Resort - Report
03:17 GMTItalian Police Capture Hundreds of Dead Dormice Intended as Dinner for Mafia - Report
02:30 GMTItalian Fans Sending Love to Johnny Depp Prove Actor Is Still Adored Outside US
01:55 GMTOne Dead in Second Grambling State University Shooting This Week, School Says Operating as Normal
01:10 GMTBiden, First Lady Spotted Maskless at Italian Restaurant in DC
01:06 GMTGodsent: US Senator Praises the Lord for Bitcoin After Lawmakers Approve Debt Ceiling Raise
00:36 GMTMajor Evacuation Flight Departs Kabul For Qatar With Over 350 People on Board - Reports
00:05 GMTIsrael Anticipates Up to 2,500 Rockets Fired Daily in Case of War With Hezbollah - Report
YesterdayThree Dead in Knife Incident in Arkansas, Police Say
YesterdayUS Coast Guard Investigating Container Ship Suspected in California Oil Spill
YesterdayVenezuelan Government Says Talks With Opposition Halted Over Saab’s Extradition to US
YesterdayCleaner Queen: Buckingham Palace Looks for Daily Janitor With 'Good Time Management Skills'
YesterdayTexas' Abbott Says Biden's 'Catastrophic Border Policies' Abandoned Citizens Near Border
YesterdayTransportation Secretary Buttigieg Defends Taking Parental Leave Amid Supply-Chain Crisis
YesterdayCollege Professor's Car Stolen During Lecture on Crime in Albuquerque - Report
YesterdayChinese Army Newspaper Urges 'People's War' Against CIA Infiltration
YesterdayOnly In for Illegal Aliens? Dems Refuse to Admit 80,000 Qualified Workers Without Immigration Reform
YesterdayVideo: Pennsylvania Mall on Lockdown After Shots Fired, 'Several' People Injured - Reports
Yesterday'Just Stop & Do No Harm': Why Biden's $3.5 Trillion Bill Will Hurt US Economy for Generations
YesterdayNetizens Sceptical Over Results of Joe Biden’s Physical Test as WH Says POTUS to Be Examined 'Soon'