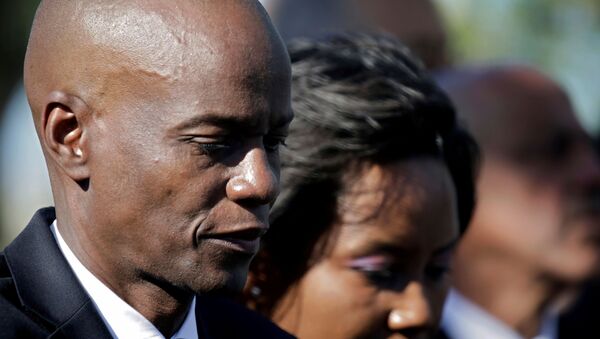 "I think now the most important thing in terms of assistance is to seek where those countries and our international partners can help us in this international manhunt, because it's very important to identify the killers," Bocchit Edmond said. "As well probably in the very short-term future to help us address the security matters, because this is an example that can show you there was a weakness in the security apparatus."

"If the foreign commandos could enter the country so easily and carried out this act of assassination against the president, to some extent, it is something that needs to be condemned," the envoy added. "And so far, I'm very satisfied and I'm glad of the international reactions, international condemnation. And now it's very important to work to strengthening our security forces."

“What I can tell you is that the current situation is, I would say, stable,” Haitian Ambassador to the United States Bocchit Edmondsaid. “The current authorities are taking measures to make sure that the security situation is controlled to avoid any more chaos. Two weeks of emergency state has been declared by the current government so we can have better control of the situation.”

"These reports are absolutely false, the United States condemns this heinous act. These false reports are nothing more than that, just false reports," Price said when asked to clarify whether DEA agents were involved in Moise's assassination.

Price added that there are no clear answers yet as to who is responsible for the assassination.

UNITED NATIONS (Sputnik) - UN Special Representative of the Secretary-General (SRSG) Helen La Lime maintains constant contact with Acting Prime Minister Claude Joseph as some 1,200 staffers at the mission are in the process of being accounted for after the killing of Haitian President Jovenel Moise, United Nations spokesperson Stephane Dujarric said on Wednesday.

Martial law was declared in Haiti in the wake of Moise’s assassination at his private residence on Wednesday night.

"The SRSG is meeting with her senior staff, she is in constant contact with the Acting Prime Minister of Haiti," Dujarric said during a press briefing.

In her discussions with the interim Prime Minister, La Lime addressed the ways the United Nations can help the Haitian authorities to coordinate support for the government, Dujarric said.

"We have about 1,200 staff at all in Haiti, a little less than 200 are international. They are all being in the process of being accounted for, so that process should be done very quickly," he said.

The United Nations is ready to assist the Haitian government in any way it can if a green light is given to launch an international investigation into the killing of Moise, but will require a mandate to do so, Dujarric added.

17:52 GMT 07.07.2021
OAS Says Assassination of Haiti President is 'Affront' to All Nations Represented in Group

WASHINGTON (Sputnik) - The Organization of American States (OAS) said on Wednesday that the assassination of Haitian President Jovenel Moise is an affront to all the nations represented in the OAS.

"We condemn in the strongest terms the assassination of the President of Haiti, Jovenel Moise, a criminal act that occurred early today," the OAS said in a press release. "This attack is an affront to the entire community of democratic nations represented in the Organization of American States."

The OAS said the assassination is an attempt to undermine the stability of the Haitian government and is calling for an end to this form of politics that threatens to derail the country's future.

Haiti, one of the poorest countries in the world, has been experiencing social, political and constitutional crises, with protesters blaming Moise for targeted killings, widespread corruption and an economic collapse.

The opposition has said it believes Moise’s five-year-term should have ended in February 2021, five years after his predecessor Michel Martelly stepped down, but Moise insisted he had an additional year to serve, a position backed by the OAS.

WASHINGTON (Sputnik) - American Airlines has canceled three flights to Haiti after the assassination of the country's President Jovenel Moise and will evaluate situation to adjust its schedule, company spokesperson Whitney Zastrow told Sputnik on Wednesday.

"The airport is closed, so we’ve canceled our flights out of Port-au-Prince (PAP) today and will continue evaluating and adjusting our schedule as needed. We currently operate three departures a day out of PAP," Zastrow said.

MOSCOW (Sputnik) - A Dominican military helicopter crashed on Wednesday as it was about to land in the city of Jimani, at the border with Haiti, Dominican media reported.

No one was injured, according to El Dia newspaper. Videos of the crash shared online showed firefighters putting out a fire that started after the helicopter hit the ground.

The Dominican Republic, which shares the Caribbean island of Hispaniola with Haiti to the west, closed the border and launched a military operation after the brutal assassination of the Haitian president.

I strongly condemn the appalling assassination of President Moïse this morning. Canada stands ready to support the people of Haiti and offer any assistance they need.

WASHINGTON (Sputnik) - The United States stands ready to assist Haiti after the assassination of the country's President Jovenel Moise, US President Joe Biden said in a statement on Wednesday.

"The United States offers condolences to the people of Haiti, and we stand ready to assist as we continue to work for a safe and secure Haiti", Biden said.

The US president condemned what he called was a "heinous act" and expressed hope Haiti's First Lady Martine would quickly recover.

UNITED NATIONS (Sputnik) - UN Secretary-General Antonio Guterres called on all Haitians to preserve the constitutional order following the assassination of President Jovenel Moise and urged for the perpetrators of this crime to be brought to justice, UN spokesperson Stephane Dujarric said in a statement on Wednesday.

“The Secretary-General condemns in the strongest terms the assassination of President Jovenel Moise of the Republic of Haiti. The perpetrators of this crime must be brought to justice”, Dujarric said. “The Secretary-General calls on all Haitians to preserve the constitutional order, remain united in the face of this abhorrent act and reject all violence”.

I am shocked and saddened at the death of President Moïse. Our condolences are with his family and the people of Haiti. This is an abhorrent act and I call for calm at this time.

14:42 GMT 07.07.2021
US Embassy in Haiti Restricts Staff to Embassy Compounds After Assassination of President

WASHINGTON (Sputnik) - The US Embassy in Port-au-Prince, Haiti is restricting the movement of its staff to the Embassy compounds following the assassination of Haitian President Jovenel Moise at his private residence by a group of unnamed gunmen early Wednesday morning, a statement from the Embassy said.

"Due to an ongoing security situation, the US Embassy is restricting its direct-hire US citizen staff to the Embassy compounds in Tabarre until further notice. The Embassy will be closed today, including for consular services. Please avoid unnecessary travel in this area at this time", the statement said.

Martial Law Declared in Haiti After President's Assassination
000000
Popular comments
Jovenel Moise was a Pro-US Dictator which makes him a good dictator. If he opposed the US that would make him a bad dictator which his assassination would been OK!