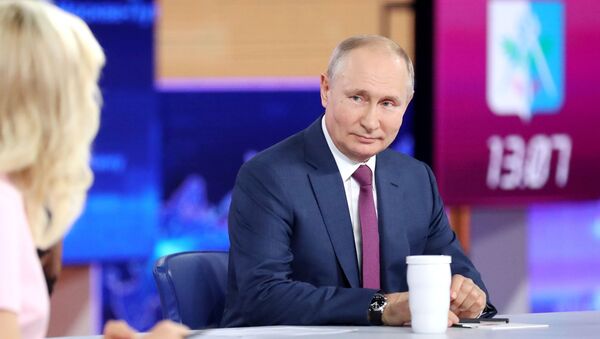 Subscribe
International
India
Africa
According to presidential spokesman Dmitry Peskov, this year the Kremlin expects over one million questions, dedicated to various topics, including the fight against the COVID-19 pandemic, economic crisis, ecology issues, Russia-US relations, and more.

Russian President Vladimir Putin answers questions from across the country in his annual Q&A session, "Direct Line". Due to the coronavirus pandemic, Putin won't be attending a studio with a live audience, but people were able to submit their questions via a mobile app, the presidential website, SMS, and phone calls.

The president will be picking the questions himself, answering as many as possible, the Kremlin stressed, pointing out that people will have the chance to speak to Putin without any mediators.

The tradition of holding "Direct Line" live Q&A sessions to address questions from the public was introduced by Putin in 2001, during his first presidential term. Last year, however, Putin had to cancel the live event due to the pandemic, taking questions from Russians during his end of the year press conference.

At the end of the question and answer session, President Putin took a quiz, answering a series of personal questions.

Asked about his lanuage skills, Putin said he is starting to lose his proficiency in German, let alone English.

Answering a question about his definition of happiness, the president answered that it is important to feel and realise that your services are needed.

On literature and music that shaped his views, he said he was fond of "War and Peace" by Tolstoy and Russian fairy tale "Kolobok", as well as Tchaikovsky's Piano Concerto No. 1.

When asked if he will continue working after his term ends, he simply answered: Why work?; joking that all he will do is dawdle.

In an answer to a question who the Russian president obeys, Putin said "the Russian people, the voters".

"Russia has played a major role in resolving this very serious crisis. No party is interested in its escalation, neither Azerbaijan, nor Armenia, nor the residents of Nagorno-Karabakh, and if we all co-exist peacefully, then we will create a condition for improving people's lives", the president said.

"By the way, their traditional partners, even allies, do you think they are happy about the way they are being treated? No one likes it", Putin said.

"I am concerned about another, a more fundamental issue, namely the beginning of the military exploitation of Ukrainian territory. As per the Ukrainian Constitution, there cannot be any foreign military bases; only training centres or other facilities can be established there.... The military exploitation of a territory that directly borders us, creates significant security problems for us", Putin said.

"If they [foreign social media companies] work in our country and make good money, they must comply with our laws. We do not demand anything extra from them", Putin noted, adding that such companies must open representative offices in Russia to enable a dialogue.

MOSCOW (Sputnik) - Russian Preisdent Vladimir Putin said on Wednesday that he did not consider Ukraine to be an unfriendly nation.

"Why is Ukraine not included in the list of 'unfriendly nations?' Because I do not think the Ukrainian people are unfriendly to us", Putin said.

The Russian government approved a list of "foreign states committing unfriendly actions against Russia" in mid-May.

"This will lead to a reduction in the total number of Russians [in Ukraine]. This, you know, is comparable, in terms of negative consequences, with the use of some kind of weapon of mass destruction, this is a serious matter", Putin said.

Putin said Kiev is not in charge of making decisions in Ukraine as Ukrainian President Volodymyr Zelensky allows Washington to make all of the key decisions.

"Why meet with Zelensky if he has let his country fall under full outside control", Putin said.

According to the Russian president, there is no way for people, who are interested in strengthening Ukraine and restoring normal relations with Russia, to accomplish anything, since they are being silenced.

"Decisions on key issues about Ukraine's livelihood are being made not in Kiev, but in Washington, and partly in Berlin and in Paris. So what is there to talk about?", the Russian president said, adding that "Nonetheless, I am not saying no to meetings of this kind".

Russian President Vladimir Putin on Wednesday emphasised that there is no international conspiracy related to COVID-19 and called on people to listen to the advice of specialists and not give in to "non-sensical" rumours.

MOSCOW (Sputnik) - The spread of the coronavirus infection can only be prevented through vaccination, Russian President Vladimir Putin said during his traditional live Q&A session dubbed "Direct Line with Vladimir Putin" on Wednesday.

"As is well known, specialists have said this many times, both on TV and on the internet … we can only prevent a further spread of the epidemic using vaccination. We have this opportunity, we have four vaccines, they are very highly technological, safe, and effective. So I hope the prejudices of some of our citizens will disappear as vaccination continues", Putin said.

According to the Russian president, around 23 million people in Russia have been vaccinated.

Putin added that that he did not support compulsory vaccination.

Commenting on a decision by some local authorities to make vaccination mandatory, the president recalled a relevant law in place since 1998 that gives regions the right to obligate certain categories of citizens to get vaccinated amid surges in infections.