'I See That Day in My Dreams Every Night': US D-Day Vet Shares Terrible Moments of WWII 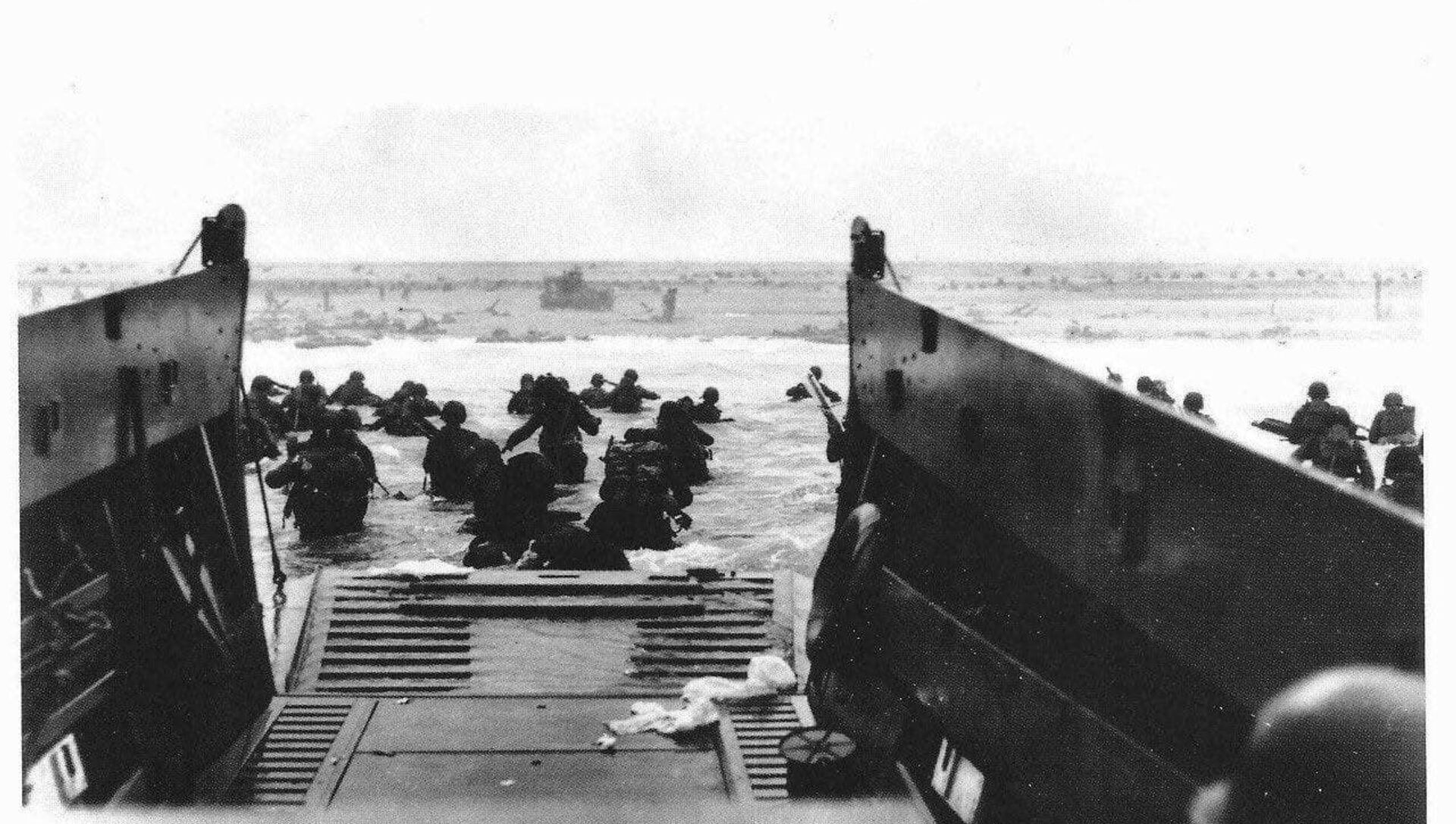 WASHINGTON (Sputnik), Liudmila Chernova - The month of June marks a number of dates celebrating battle victories in Europe during the Second World War, among the most outstanding of which is the Normandy landings of the Allied troops on what is known as D-Day.

US World War II veteran Frank DeVita participated in the Allied invasion of Normandy, France on June 6, 1944, and recently shared his memories of the war.

DeVita said he still has nightmares about D-Day and the horrifying moments of the war.

"I dream every night, and most of the time [about] the war," DeVita said. "It brings back bad memories. And I can't sleep, and I cry during the night... to me it’s that day on the beach, it’s still that same day on the beach."

DeVita noted that for 70 years after D-Day, he never talked about it. 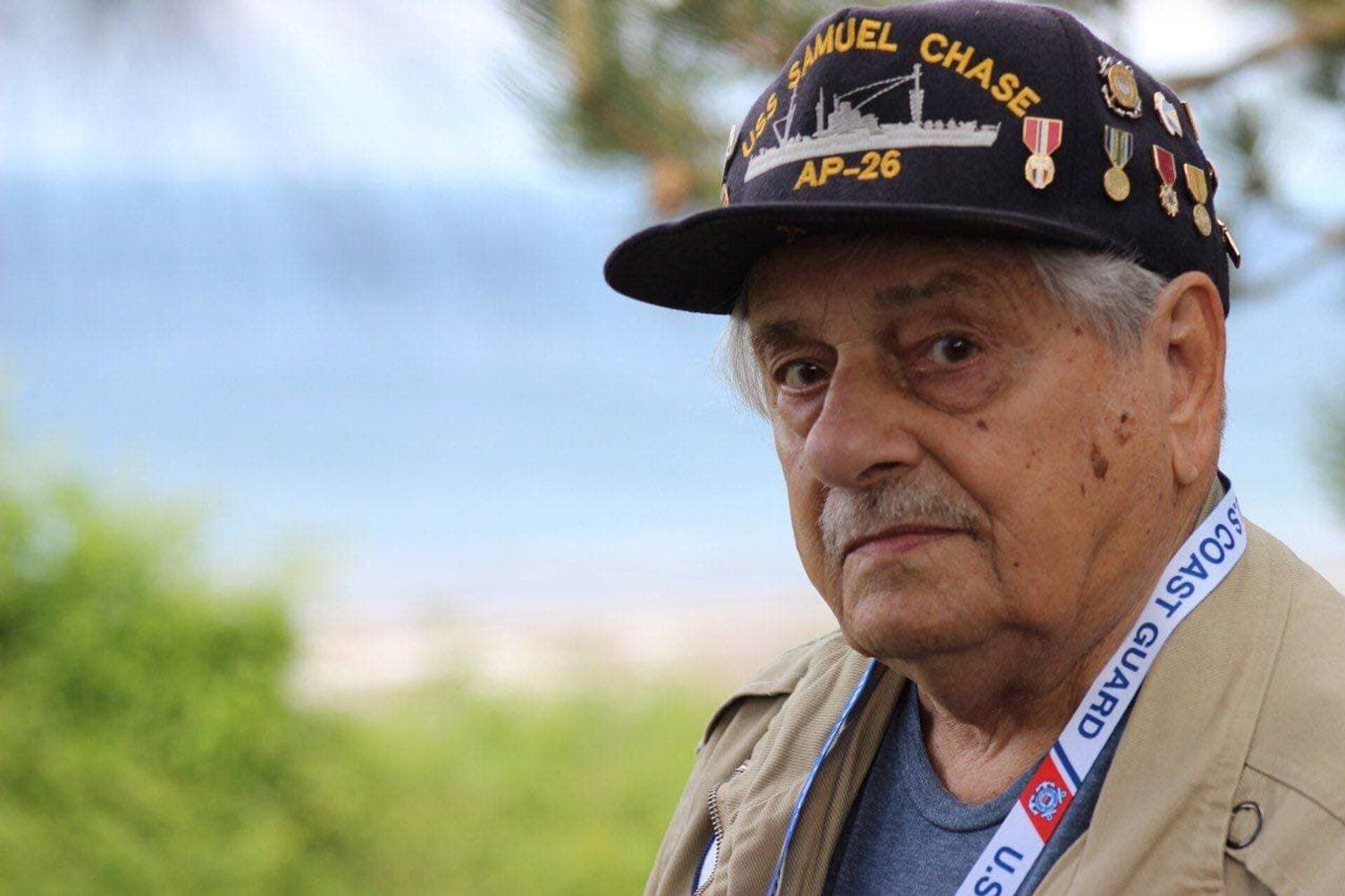 Frank DeVita was only 16 years old when World War II hit the shores of America. At that time, he was playing baseball and was a Boy Scout.

He learned that the War broke out while listening to a football game between the New York Giants and the New York Dodgers.

"They were talking and said: The Japanese have just bombed Pearl Harbor. That's the first time I knew of it. That would have been December 7, 1941," the veteran said.

He tried to join right after the Pearl Harbor attack but was too young.

"I needed my mom's signature, but she would not sign until I graduated from high school," DeVita said, explaining that he was only 16 then and had to wait until he turned 18 years old to join.

The veteran went on to say that when he was old enough, he joined the US Coast Guard. 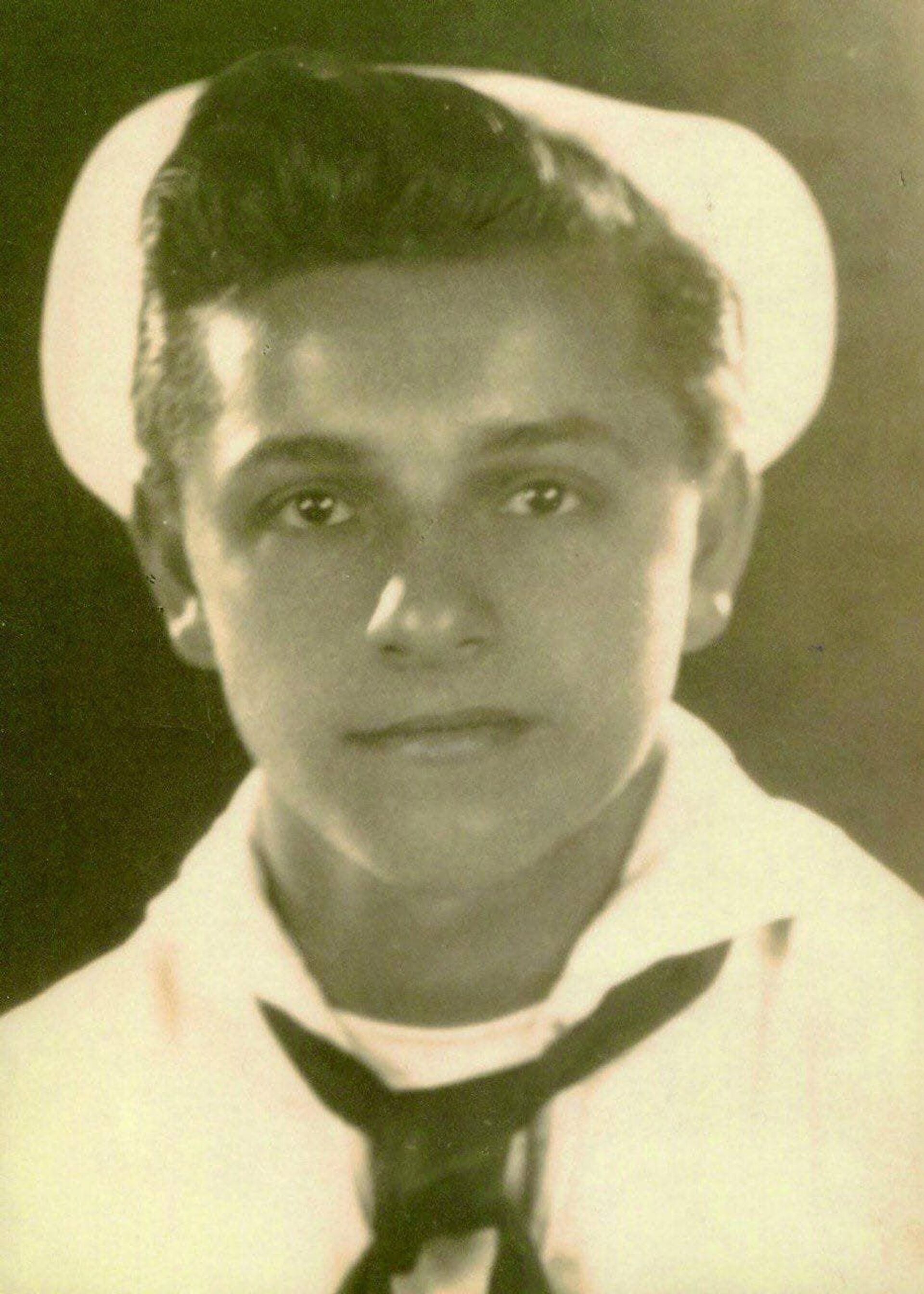 DeVita also said 17 boys from his high school decided to join the services.

Frank pointed out that while he joined because of the Japanese bombing of Pearl Harbor, they sent him to the Atlantic as opposed to the Pacific.

"After the Japanese bombed Pearl Harbor, I wanted to get even with them and it is very ironic. When I got in the service, I went to Europe, not Japan," he said.

DeVita served on the USS Samuel Chase, which was a Navy-built ship, but was US Coast Guard-manned.

"Those type of ships were called attack transport," he added. "So, they brought in the troops to Normandy. What a lot of people don't know is that It was the Coast Guard that delivered the troops into Omaha Beach and Utah Beach on D-Day for the Americans."

"It was June 6, the invasion of Europe," DeVita recalled. "On June 6, I was on the ship and we had little boats called LCVP's [Landing Craft Vehicle, Personnel] and we went onto the beach at Normandy."

These are the famous Higgins Boats, used to bring in troops to beach landings.

DeVita explained that they had 30 army soldiers on these Higgins boats, and his job was to lower the steel ramp on the boat, allowing the soldiers to disembark and head onto the beach. In the morning, his ship brought in army soldiers from the US Army 1st Division, nicknamed "The Big Red One", and then later on in the day, the US Army 29th division.

DeVita and two other men from the Chase were running the Higgins boat. One of the other two was the coxswain who steered the boat.

"The other guy when we landed, he put out the anchor or the rope so we could get pulled in," he said. "My job was the ramp."

DeVita’s job was to drop the ramp when the boat got near to the beach and then lift it after the American soldiers left the boat.

"In the front of the boat, there was a ramp. It's like a big garage door and it's made of reinforced steel. And the ramp which you hold back when machine guns fire and single-fire they could bounce off the ramp," he said. "That was my job: either raise or lower the ramp."

On the first wave, he added, they had 30 soldiers on.

"And when I dropped the ramp, machine gun bullets that were bouncing off the ramp came into the boat and killed 15 soldiers," DeVita continued to say. "Three of them got off the boat and they made it to the beach. But as soon as they got on the beach, they were machine-gunned to death."

DeVita said the Germans had 33 machine guns on the shore, while above the beach there were a lot more machine guns and 88's.

"So, we were caught in the crossfire," he said.

DeVita recalled that the sea was very, very rough, and they lost six boats from the Chase at Omaha beach and were then left with 15.

The veteran noted that he made fifteen runs or waves, originally bringing in troops, and then around the 8th or 9th wave he was taking the dead bodies and wounded off the beach on the way back.

"After the first run, we had to go back to the ship and pick up another load of soldiers, 30 more. And then we did that, over and over and over again," he said.

DeVita said they had a lot of wounded aboard the boat.

DeVita then shared the most frightening moment of that day. 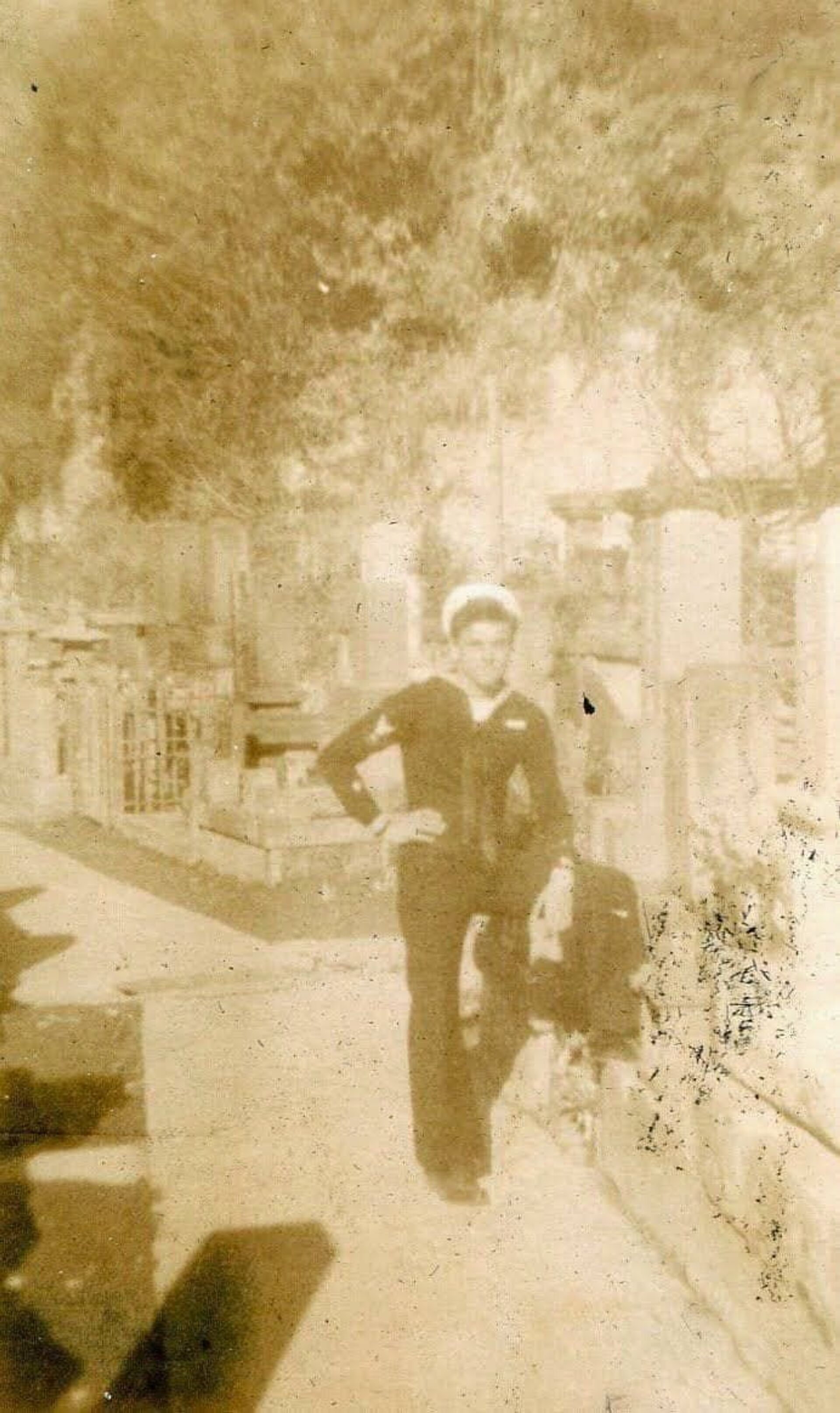 DeVita said after June 6th, he stayed three days off the beach and took the wounded and the dead with them. Then, they went back to the ship’s home base, which was in Glasgow, Scotland.

"We lost a lot of boats, so we had to replace the boats," he went on to say. "And then we got ready for the second invasion, which was August 15th, in Southern France. Marseille."

DeVita said that he brought the US Third Division into Marseille.

"In comparison to Normandy it was a piece of cake," the veteran stressed. "Because there wasn't that many people firing at us and a lot of people that were firing at us were not Germans, they were Polish and Russian prisoners of war that were forced into the German army."

They went back to Glasgow, he added, to put the Chase in ship shape where they were told they would be going to the Pacific.

"I went to the Pacific, through the Panama Canal, I went to Pearl Harbor, and then we took troops," he said. "I didn't do the actual invasion of the Philippines, but I did bring troops into the invasion."

After the Philippines, Frank’s WWII service continued in Okinawa.

"We were supposed to do the invasion of Okinawa, but unfortunately we had an accident on our boatship and we had to go back to the United States for repairs," he added. "So, we never made the actual invasion. But when we came back, that's when the Japanese had all the Kamikazes. We survived two Kamikaze attacks."

Family and Friends During War

DeVita said the thoughts of his family, especially his mother’s, kept him alive during the toughest times, including on D-Day.

"I didn't want to die [because] if I died, my mother would have gotten a telegram: ‘Mrs. DeVita, sorry to tell you your son has died.’ And that's why I stayed alive. My mom kept me alive," he said.

DeVita noted that during the War, while he was away, his mother used to go to the church and rolled bandages for the troops. He remembers fondly receiving letters and packages from back home.

"They were very nice," he said. "I probably wrote a bunch of letters back. I wanted to stay in touch with them, even though I was far away. I wanted to be with them."

"It was May 8th. I was aboard my ship. And the notice came over the loudspeaker: the Germans surrendered," DeVita recalled. "That’s how we got the news that Germany surrendered. We went bananas. We went crazy, you know, hugging one another and kissing one another and we were so happy that the war was over in Germany." 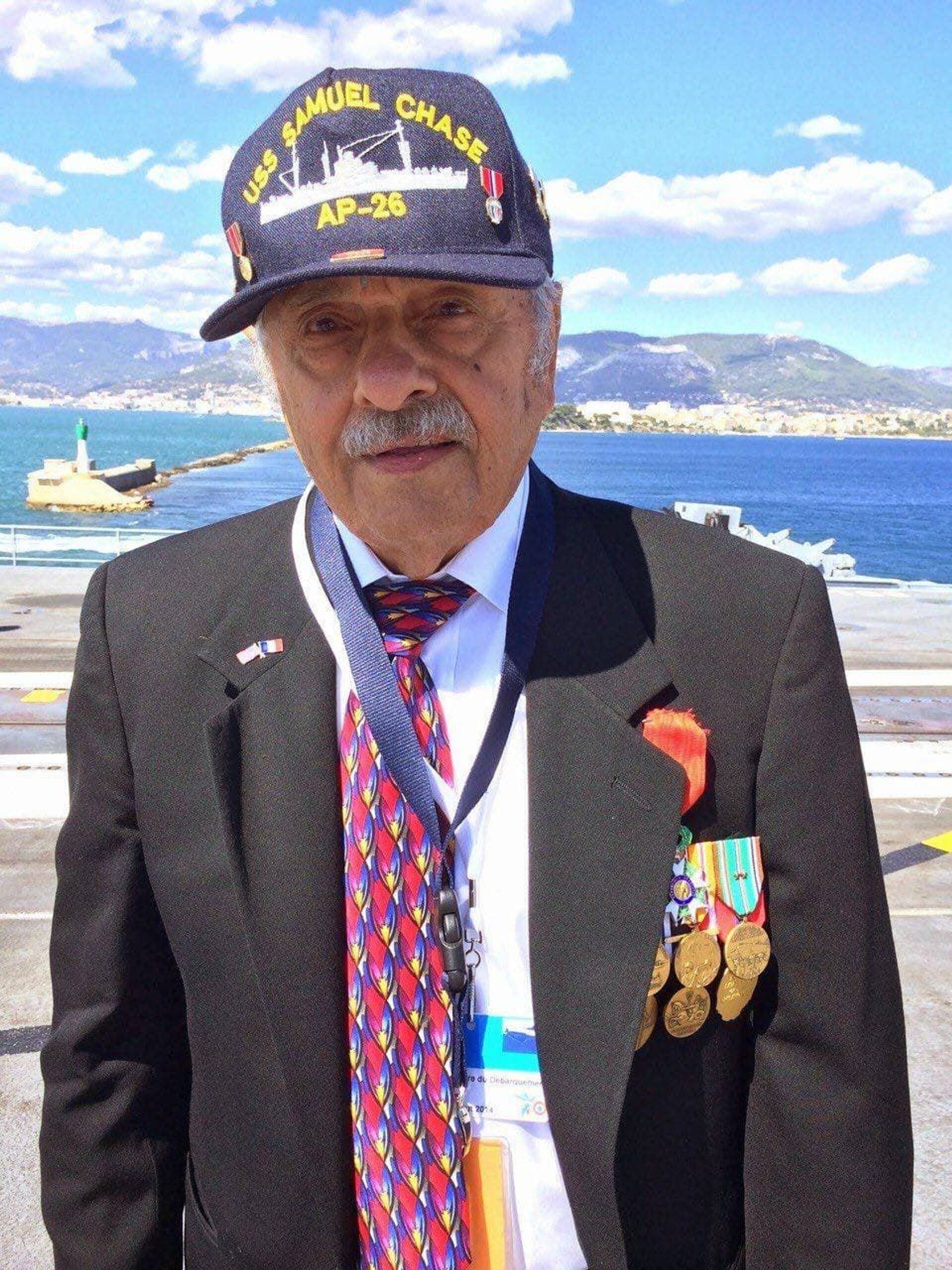 "When I got home, you know, I saw in the movies when the soldiers came home, they had a big party for them, everything else. When I got home, there was nobody there, nobody to greet me," he said.

His father who worked for the Navy was at work.

"My sister was a nurse. My little brother was out playing baseball and I couldn't find my mother," he said. "So I went to the neighbor next door; she was Italian and the first thing she said: ‘you need something to eat?’ So I said, ‘no, I'm looking for my mom.’ She says, ‘Your mom, she's at the church rolling bandages,’ so I went all the way to the church."

At the church, he said he saw "a big circle of women, and my mom had her back to me."

"The women were looking at me, they were all like ‘Ooooh,’" he added. "And my mom didn't know what was going on. She turned around. She saw me and fainted right away."

Then, DeVita added, they got on the phone and called all the neighbors, friends, and relatives, and then had a "big, big party."

DeVita also said he stayed in touch with friends he made during the war, and starting in 2014 went to Normandy to participate in D-Day anniversaries, until recently when his failing health has precluded his travels.

"We met some very, very wonderful people in France, and they used to take me into their house and make a big meal for me and I kept in touch with those people," he said.

Today, DeVita lives in his house and goes every week to the cemetery to visit his wife’s grave.

"I have a big house. And I used to cut the lawn and plow the snow; painted every room. It takes a lot of work to maintain a house. And eight years ago, I lost the most precious thing of my life. My wife died eight years ago. And my whole life changed," he said.

They knew each other since the age of 5. They were neighbors in Brooklyn.

"We went to kindergarten together. So I knew her all my life. I miss her. I miss her. I go every Friday to the cemetery, and I talk to her and I tell her what's going on that week. I know she doesn't hear me, but I hear me. It makes me feel better."