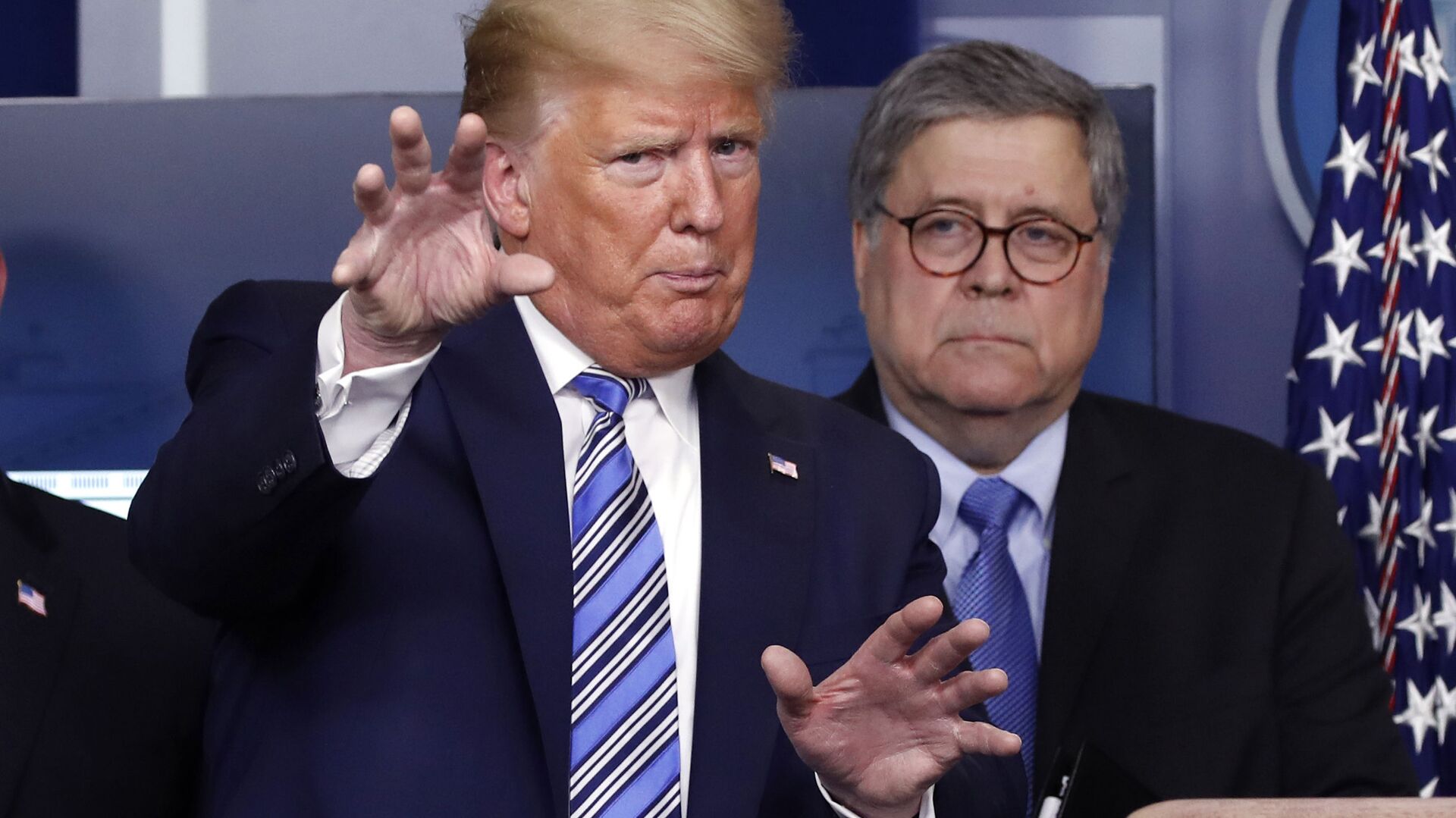 Ekaterina Blinova
All materialsWrite to the author
Bad guys were almost caught, but there was no attorney general capable of acting, ex-President Donald Trump said in a Tuesday statement, lashing out at former Attorney General Bill Barr for slacking off on the FBI and DOJ over the controversial Trump-Russia probe and overlooking apparent 2020 election irregularities.

"It takes a very strong and special person to go against the 'mob'", Trump wrote in a statement on 29 June. "Bill Barr was not that person… He was afraid, weak, and frankly, now that I see what he is saying, pathetic".

The former president's rebuke of Barr's conduct came on the heels of a story by ABC News correspondent Jonathan D. Karl, published in The Atlantic on 27 June, apparently as a promo for the journalist's forthcoming book "Betrayal".

Karl notes that Barr's 1 December statement to an AP reporter that the DoJ had not seen fraud "on a scale that could have affected a different outcome in the election" sent a "definitive message that the effort to overturn the election was without merit".

Even though Barr green-lighted an official investigation into the matter, he did not actually believe that it would bear tangible results and overturn Joe Biden's win, according to the journalist.

"My attitude was: It was put-up or shut-up time", Barr told Karl. "If there was evidence of fraud, I had no motive to suppress it. But my suspicion all the way along was that there was nothing there. It was all bullsh*t".

According to the ABC News correspondent, "the Department of Justice ended up conducting no formal investigations of voter fraud". However, the attorney general kicked off an unofficial inquiry into the voter fraud assumption, which, according to him, made him sure that it was all "bullsh*t."

Predictably, Trump was displeased by Barr's public statement that no massive voter fraud had been found. He asked the attorney general why the latter had failed to prosecute Biden’s son Hunter; why he did not release John Durham’s report on the origins of the Trump-Russia investigation before the election; and why he had not prosecuted former FBI Director James Comey. It's unclear whether Barr gave answers to these questions, which were also widely discussed at the time by pro-Trump GOP lawmakers and conservative observers.

While Barr promised to Trump not to resign before everything had been sorted out, he "almost immediately began to regret his decision to stay", according to the journalist. Eventually, the attorney general wrote "an effusive resignation letter" and left before the end of the year. 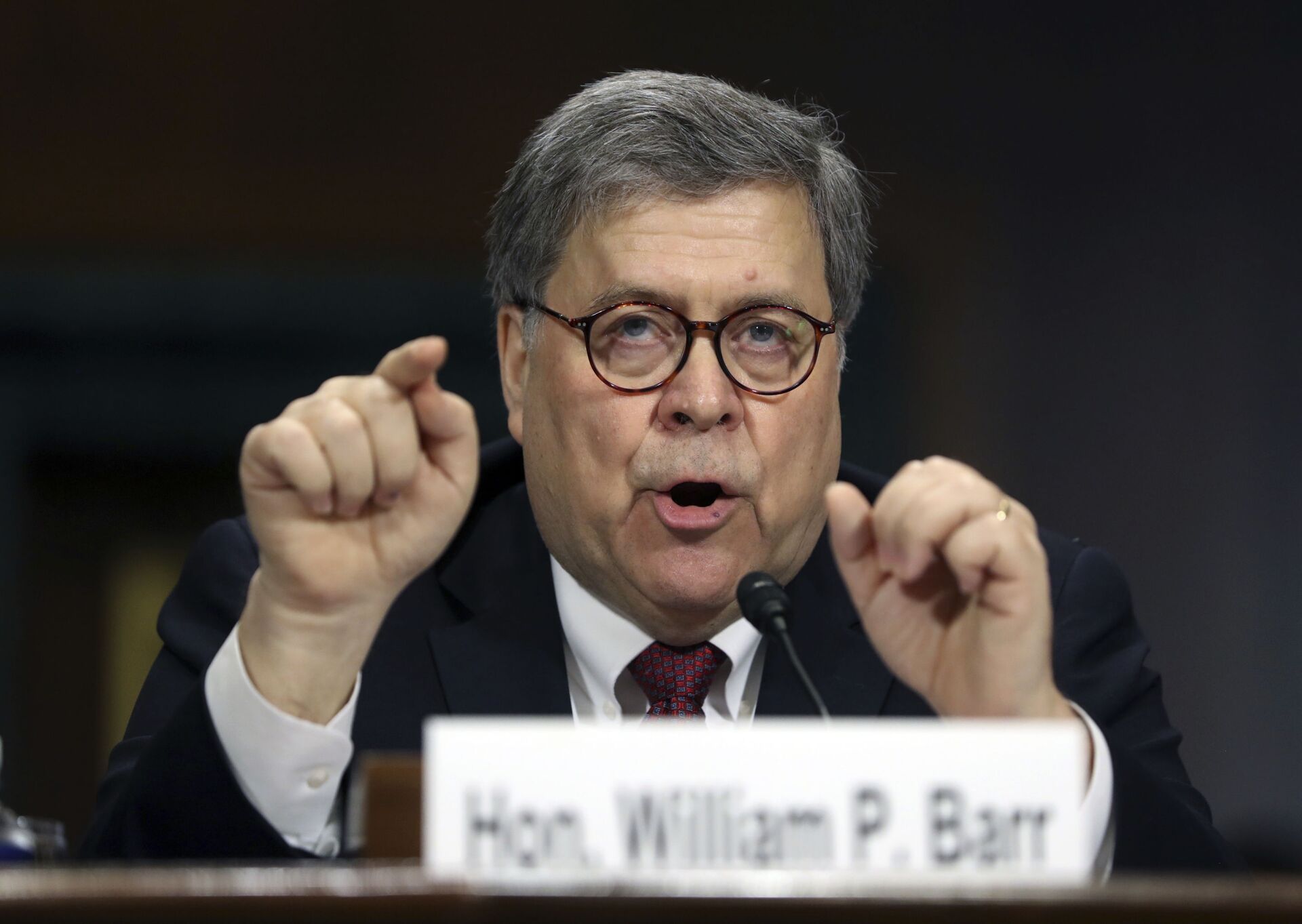 In this May 1, 2019 file photo, Attorney General William Barr testifies during a Senate Judiciary Committee hearing on Capitol Hill in Washington, on the Mueller Report. Former FBI lawyer Kevin Clinesmith will plead guilty to making a false statement in the first criminal case arising from U.S. Attorney John Durham's investigation into the probe of ties between Russia and the 2016 Trump campaign.
© AP Photo / Andrew Harnik

'Bill Barr Has a Problem: Nobody Trusts Him'

Karl's story prompted a lively debate in the US media and on social media, with Barr receiving little sympathy from either the right or the left side of the American political aisle.

"Don’t buy Bill Barr’s attempt to rehab his image", a 29 June Vox article read, insisting that the former attorney general would be largely remembered for "a highly misleading summary of the Mueller report" and attempts to "substantiate Trump’s conspiracy theories".

Rudi Giuliani’s license to practice law was suspended. Bill Barr’s should be as well.

"Bill Barr has a big problem: he sabotaged the Trump administration", echoed Newsmax correspondent Emerald Robinson. "Nobody trusts him. The Right can't stand him and the Left hates him. He wants to rehab himself. So he goes to Jonathan D. Karl to pander to Democrats in The Atlantic".

Meanwhile, it appears that the story of alleged election fraud is not over yet. The Arizona GOP has finished its independent audit of 2.1 million ballots from Maricopa County. There is also an Arizona-style push to review the results in states including Michigan, Georgia, Pennsylvania, and Wisconsin, according to Politico.

Time Magazine added to the controversy earlier this year, detailing how a "well-funded cabal of powerful" liberals got states "to change voting systems and laws", poured tens of millions into states' election administrations, and persuaded Big Tech to take a "harder line" on conservatives in order to "fortify" and "save" the 2020 election.

Remember, even Fauci said in-person voting would be fine in 2020

​The story, written by Nancy Pelosi's biographer Molly Ball, was interpreted by many US conservatives as proof that the elections were "rigged".

Trump has not lost hope that the recent audits in swing states will indicate that he was right about the 2020 election being "stolen" from him.

"The facts are rapidly coming out in states and courts about the 2020 presidential election scam, and let's see if Bill Barr, a man who was unable to handle the pressure, was correct? The answer will be a resounding no!" the former president concluded on Tuesday.