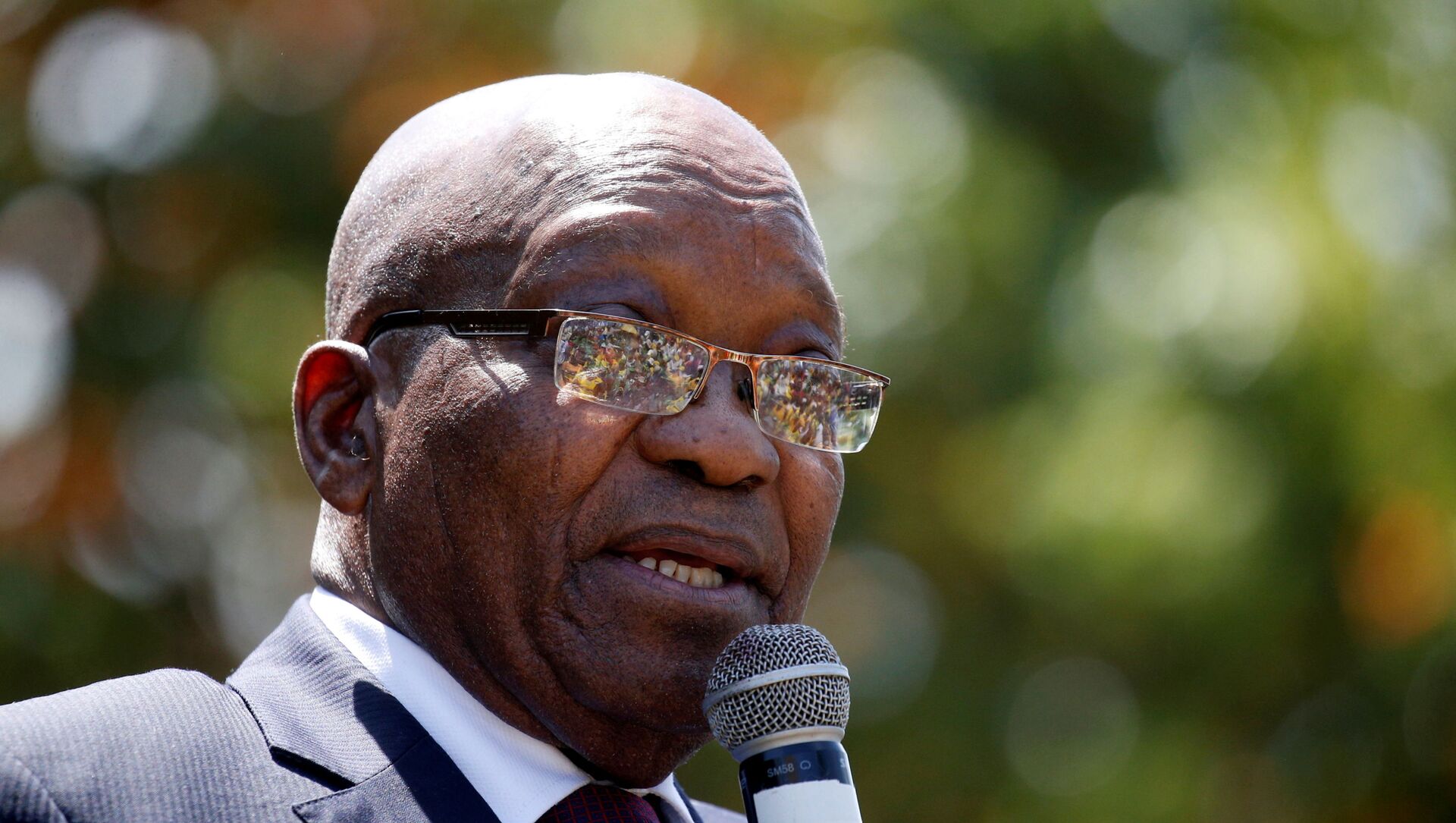 © REUTERS / ROGAN WARD
Subscribe
Jacob Zuma has already spent time in prison under the apartheid system from 1963 to 1973 for conspiring to overthrow the government as a member of the ANC's armed wing uMkhonto we Size ANC members and his family have vowed to fight any attempt to jail him again.

South Africa's ruling party has urged members not to protest the jailing of its former president Jacob Zuma.

ANC National Spokesman Pule Mabe said the ruling party was "studying the judgement" issued by the Constitutional Court that morning, sentencing the 79-year-old leader to 15 months for contempt of court.

Zuma was convicted by a majority of the bench over his refusal to appear for a second time at the commission into "state capture" chaired by the court's own Deputy Chief Justice Raymond Zondo.

"Without doubt this is a difficult period in the movement and we call upon our members to remain calm," Mabe said.

"The meeting of the National Executive Committee (NEC) scheduled to take place this weekend, will reflect on implications and consequences of the judgement," the statement added — without noting that Zuma had been ordered to turn himself in to police by the close of Sunday, before the NEC's decisions are communicated.

"We further reaffirm our commitment to upholding the rule of law and fulfilling the aspirations of our constitutional democracy," Mabe added in a thinly-veiled expression of support for the court.

Zuma has already spent time in prison under the apartheid system from 1963 to 1973, for conspiring to overthrow the government as a member of the ANC's armed wing uMkhonto we Size (MK). He was kept in harsh conditions on Robben Island, which housed other political prisoners including Nelson Mandela.

Following his release, Zuma spent 15 years in exile working for the movement. ANC members and Zuma's family have vowed to fight any attempt to jail him again.

Ex-South African President Jacob Zuma Reportedly Sentenced to 15 Months in Prison
Zuma refused to answer  a second round of questions at the commission — which he himself ordered as president — in November, and in response asked Zondo to recuse himself over their “close relationship” and the judge’s “bias”. When Zondo ruled against Zuma in his own favour and called a tea break, Zuma and his legal team excused themselves and left, prompting Zondo to ask the commission secretary to make a criminal complaint against Zuma.

The South African communist Party, which several of its leading members in the cabinet, also stood up for the court.

"We wish to stress the supremacy of the constitution and the rule of law, including the principle that no person is above the law. The SACP calls on everybody to respect the judgment," SACP media liaison Hlengiwe Nkonyane said. "It is important for the Commission to finish its work."

The commission was meant to conclude and report on March 31, but has continued past that deadline.

Handing down the judgement, Justice Sisi Khampepe claimed that Zuma's decision not to contest the charges against him — and run the media gauntlet outside the Johannesburg court — had "aggravated" the contempt.

Zuma resigned as president in February 2018 in response to a vote of no confidence by the ANC NEC, following a long campaign by the media alleging "state capture" by the Gupta family of Indian-born businessmen. He was succeeded by his Billionaire deputy Cyril Ramaphosa, one of South Africa's 20-richest people.

Attempts since the late 1990s to investigate and prosecute Zuma for corruption over a government arms deals with French company Thint — struck when he was only head of the KwaZulu Natal provincial government — are still dragging on without any imminent prospect of resolution.

Mabe was contacted for further comment but did not respond.

000000
Popular comments
If South Africa can jail Zuma, why can’t the USA put Cheney, Bush, and Rumsfeld on trial for war crimes? The three sociopaths have legs, so that when they move around they will not leave a trail of slime behind them like snails do.