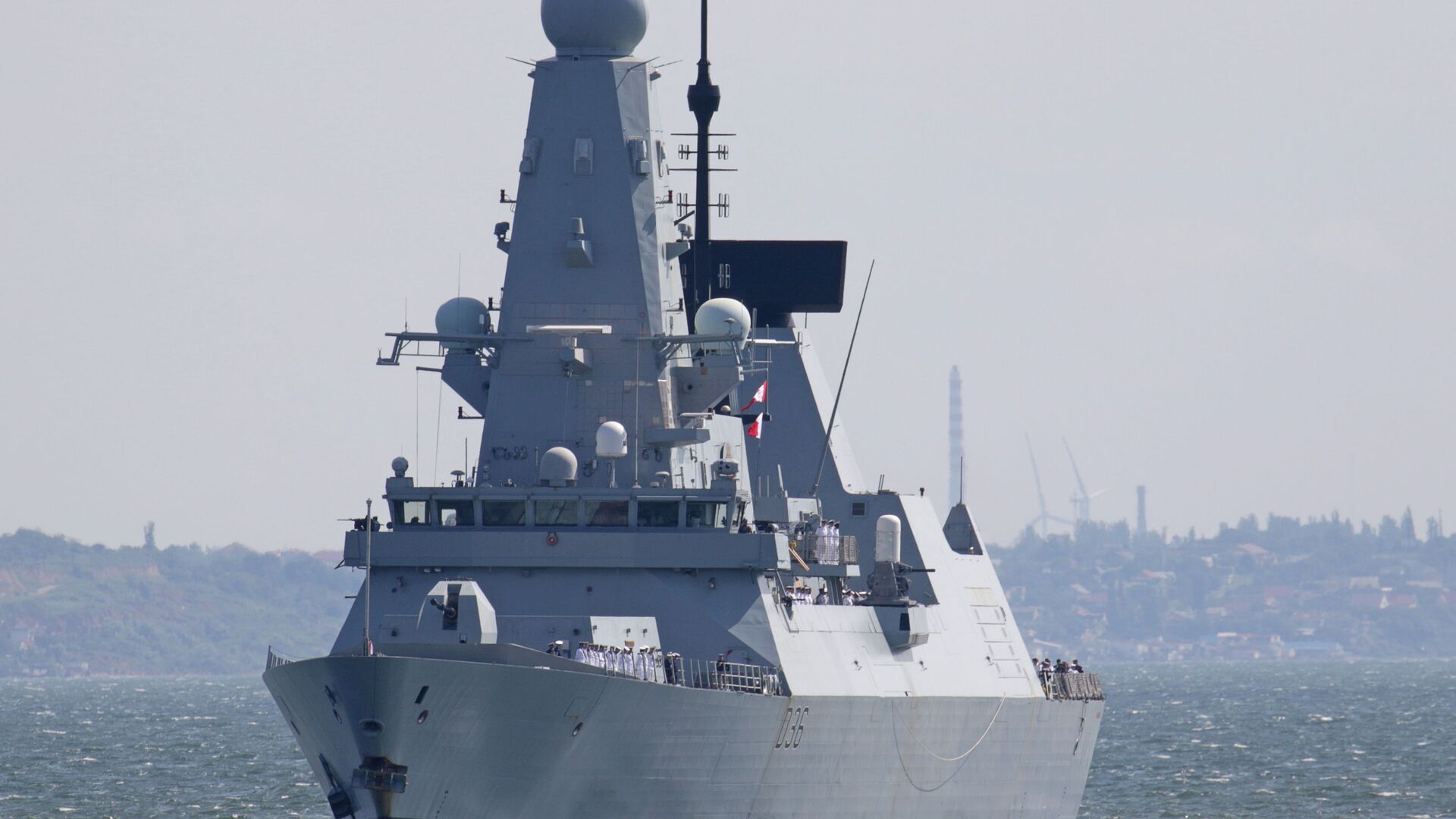 Ekaterina Blinova
All materialsWrite to the author
A bundle of classified Ministry of Defence (MoD) documents containing details about the Royal Navy's Type 45 destroyer HMS Defender's provocative Black Sea passage was recently discovered at a bus stop in Kent, a county in southeastern England. What's behind the mysterious dump?

The BBC, who broke the story on Monday, specified that 50 pages of secret MoD papers were discovered in a "soggy heap" behind a bus stop in Kent on the morning of 22 June, a day before a British warship sailed through Russia's territorial waters near Cape Fiolent, Crimea, which is close to a Russian Black Sea Naval Base in Sevastopol.

Having issued repeated warnings to HMS Defender over violating Russia's territorial waters, Russian attack aircraft and coast guard ships fired warning shots forcing the British Royal Navy destroyer to leave the area, according to video evidence from Russia's FSB. In the aftermath of the incident, the UK rejected Russia's account of events, insisting that HMS Defender was making a legal and innocent passage. However, the documents dated 21 June indicate that the British military was well aware of Russia's possible reaction and deliberately resorted to the provocative mission, dubbed "Op Ditroite", in a bid to send a message to Moscow. The strange events surrounding the discovery of the damning files have triggered questions as to whether it was an accident or a leak.

UK Royal Navy Knew What It Was Doing

"This is not the first time that sensitive military and UK government documents have been found in places they should not be", says Matthew Gordon-Banks, a former member of the British Parliament and former senior research fellow at the Defence Academy of the UK. "Regrettably it may not be the last unless those handling such documents take greater care".

According to a UK government source, a senior civil servant is thought to have mislaid the documents, which is a very serious breach of protocol because the documents look as if they should never have been taken out of the UK Ministry of Defence, the former MP highlights.

"Part of the documents were clearly marked 'FOR UK EYES ONLY' not even our US friends, but they show the clear planning which has gone into the actions and orders of HMS Defender which will have been authorised at a political level", Gordon-Banks notes. "Travelling at one point within the 12-mile UN accepted limit of Crimea and the highly sensitive Russian Black Sea Naval Base at Sevastopol is no accident. I credit the UK Royal Navy as knowing exactly where they were at any moment".

The papers in question leave no doubt that it was "a long planned operation which was potentially highly dangerous, and relied on the good sense of Russian forces not to engage but merely to warn", according to the politician, who believes the mission achieved "very little". 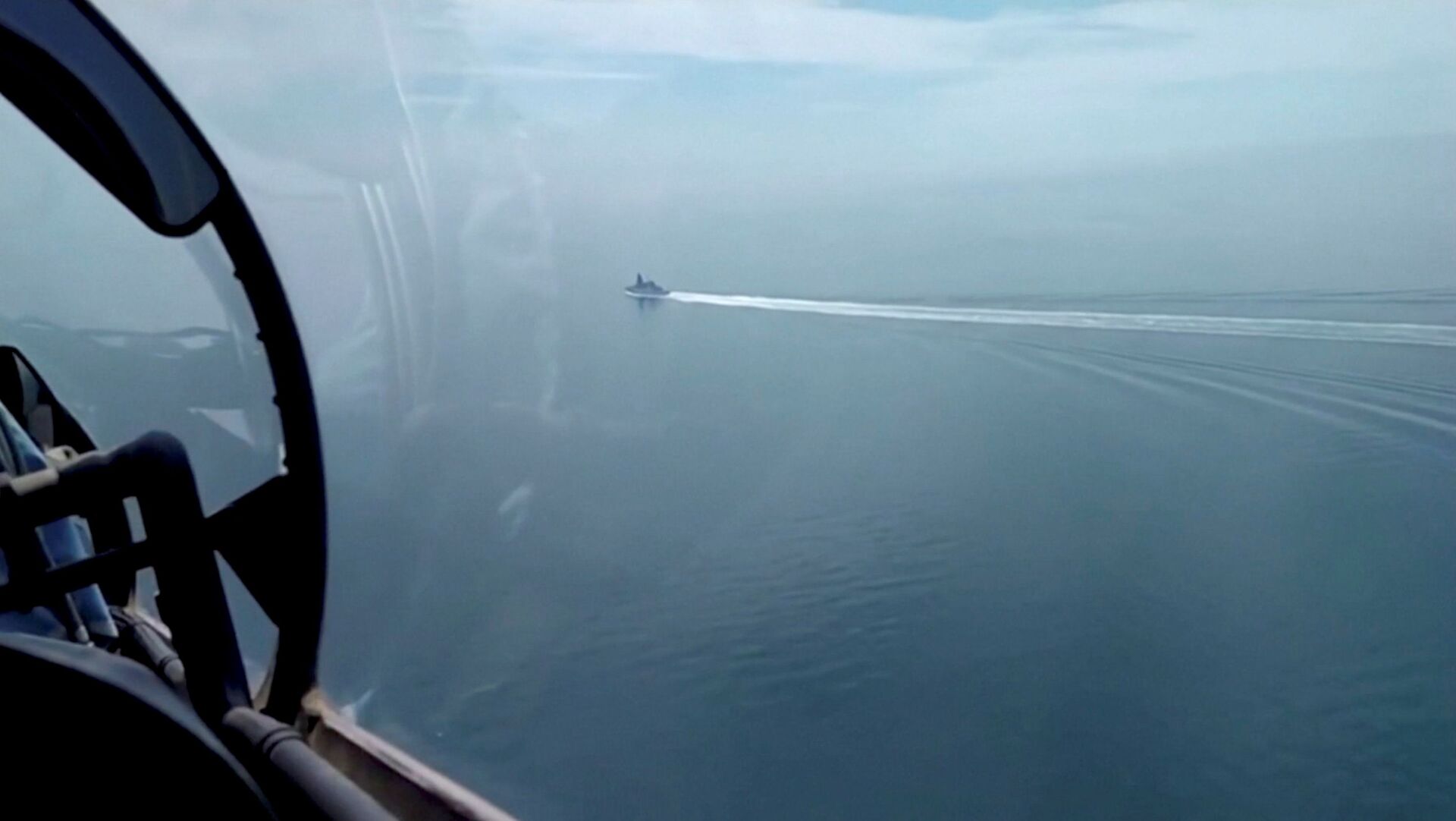 Two Possible Reasons Behind the Dump

"The discovery of secret documents behind a bus stop can only be down to one of two reasons", says Nick Griffin, former chair of the British National Party and former member of the European Parliament. "Either it's a cover for a deliberate leak by an official - presumably one who disagrees with the official policy of reckless provocation of Russia - or it is symbolic of the shambolic incompetence that is endemic in modern Britain".

Aside from this, there are two other potential factors, according to the former MEP: the first one is the "incompetence and arrogance" of the incumbent Conservative government; the other is the immense influence of a tangle of neo-conservative think tanks, such as the Henry Jackson Society and Policy Exchange. The latter are infamous for "constantly pushing hostility to Russia for a variety of reasons, including ancestral hatred, heterophobia, and the interests of the military-industrial complex", Griffin notes.

The politician does not believe British neocons have any coherent real-life plan behind their provocative conduct: it's more likely that they are guided by enmity towards Russia while "their geopolitical power slipping away as the period of western world dominance comes to an end", according to him. 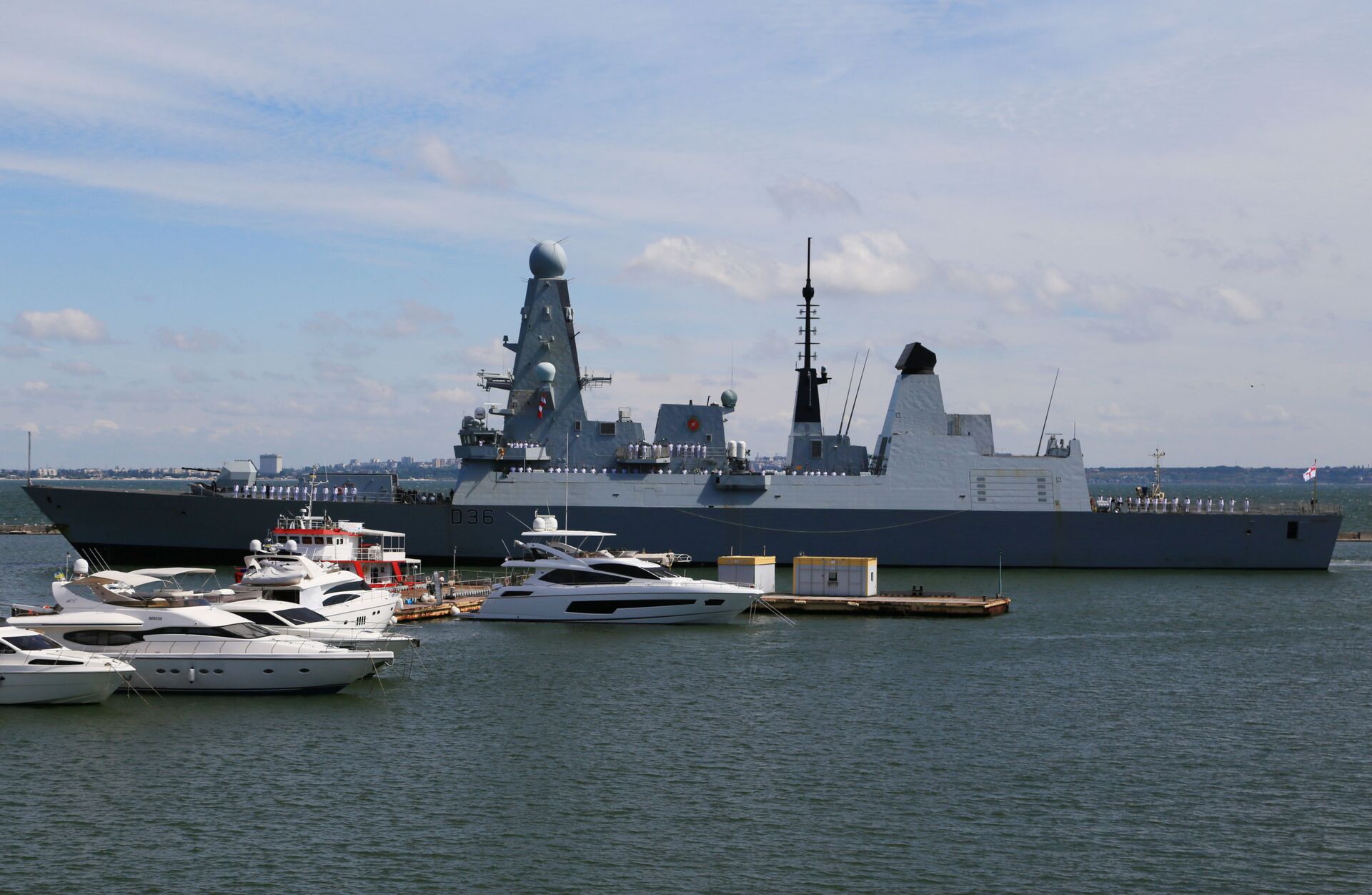 'It's Clear Who the World's Arsonist Really is'

The 22 June document dump might also be a signal from "well-meaning people" within Britain's corridors of power, believes Alex Krainer, author of the book "The Grand Deception".

"Of course, the British Ministry of Defence, its intelligence community and its diplomacy probably consists of a majority of decent, well-meaning people simply doing their jobs, believing perhaps that they are working on the side of the good guys", the author suggests. "But when the establishment's reckless behaviour becomes too obviously devious, some of those decent, well-meaning people perhaps try to sound a warning to their compatriots".

There is nothing new about that, given that former NSA contractor Edward Snowden also broke ranks with the US intelligence establishment to inform the world about Washington's unprecedented spying, Krainer notes. It is plausible that the MoD's arrogant plan to poke Russia had unnerved an apparent "leaker":

"Sailing a military destroyer within 12 miles from the Crimean coastline can only be regarded as a reckless provocation that could have had incalculably adverse consequences for the whole world", Krainer highlights. "This provocation was so blatant as to defy any 'plausible deniability' scenario and now it is becoming increasingly transparent who the world peace arsonist truly is". 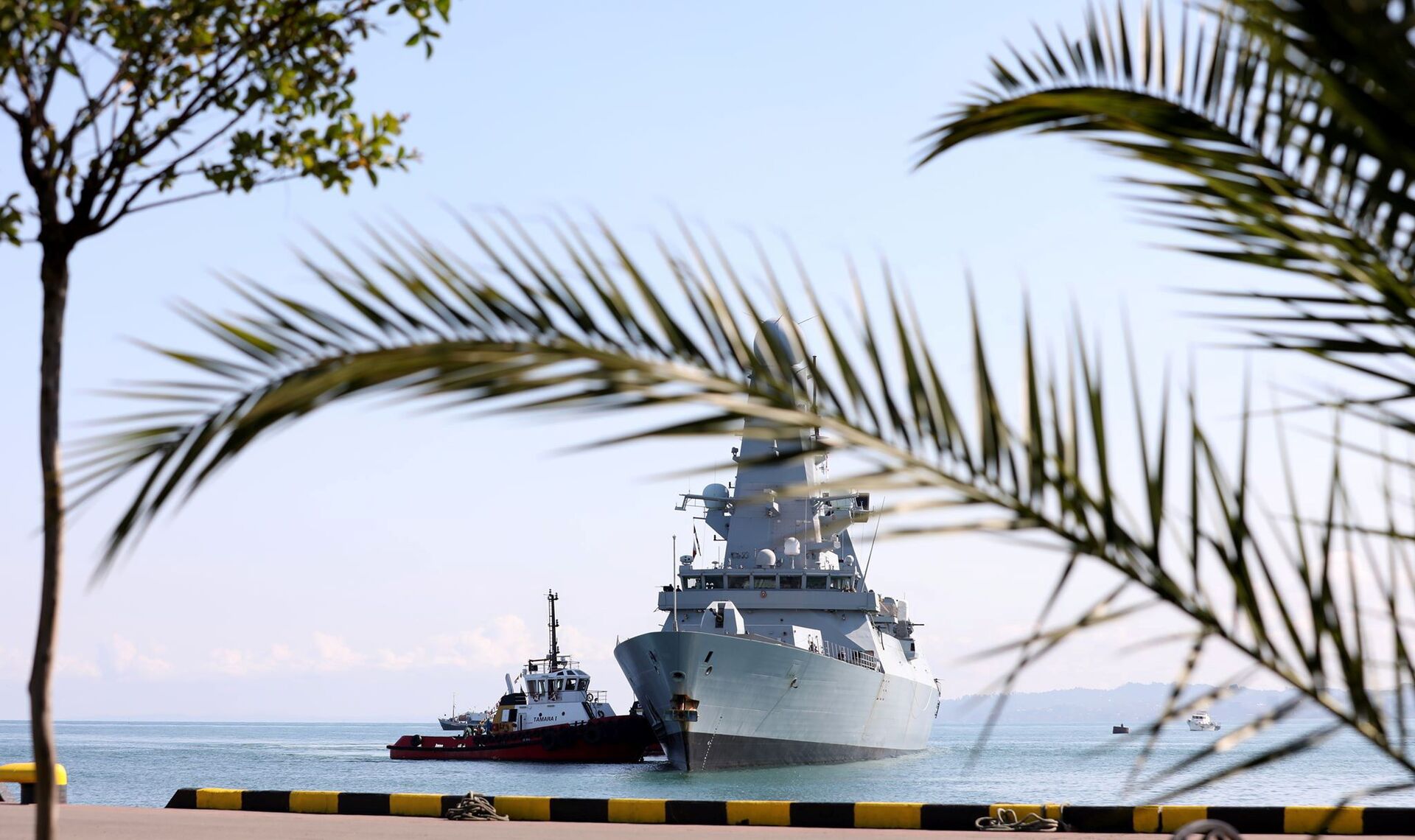 'UK Took It Upon Itself to Spark Confrontation With Russia'

When it comes to the latest provocative incident in the Black Sea involving Britain's HMS Defender, Krainer believes that one is witnessing the continuation of the UK's 200-year-old geopolitical game aimed at gaining dominance over the Eurasian landmass.

Although the UK ceded its leading "imperial" positions to the US in the 20th century, the imperative formulated by Mackinder remained intact, being promulgated by American geostrategist and ex-National Security Adviser Zbigniew Brzezinski in his "Grand Chessboard" and his "Geostrategy for Eurasia". In 2018, Assistant Secretary of State for European and Eurasian Affairs Wes Mitchell advocated similar ideas, insisting that confronting Russia would be among the highest priorities for the Bureau of European and Eurasian Affairs.

"Because it is not possible for either the US or British military might to control this landmass, the geostrategic imperative rests on preventing the rise of a rival power and keeping weaker powers weak, divided, and perpetually fighting among themselves", the author says. "In this context, the rise of Russia is not to the empire builders' taste and Russia's alliance with China is particularly threatening".

As Washington appears to be distracted by domestic politics, a row with China, and the bold Great Reset plan, "it seems that the British side took it upon itself to try and spark another confrontation with Russia - perhaps a Crimean War 2.0", Krainer сoncludes.