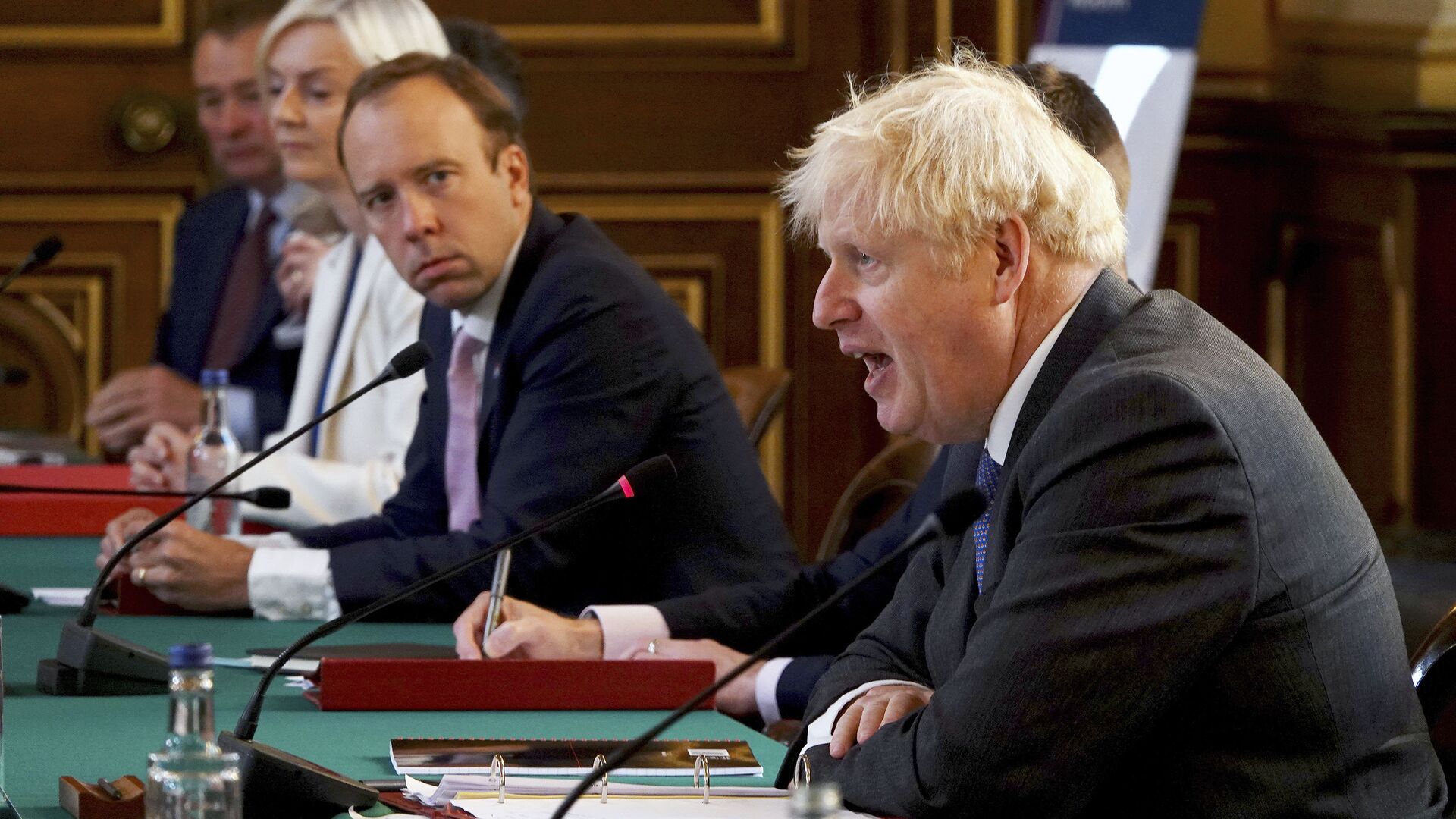 Aleksandra Serebriakova
Moscow-based Sputnik correspondent specializing in foreign affairs.
All materialsWrite to the author
In the UK, politicians have a history of steamy love affairs that have often cost them their jobs and reputation.

UK Health Secretary Matt Hancock has had a difficult couple of weeks – and not only because of an ongoing COVID pandemic. First the minister was forced to repel attacks from Boris Johnson’s former aide Dominic Cummings about his handling of the health crisis. Then it was claimed that he didn’t even have support from BoJo himself, who allegedly deemed his top officials “f****** hopeless” in a series of WhatsApp messages.

Now, it has emerged, according to a circulating security footage video, that the married father-of-three snogged his own aide Gina Coladangelo in the office.

But the health secretary is not the first (and probably won’t be the last) British politician to express public regrets about his steamy private life.

A major sixties scandal saw Secretary of State for War John Profumo lose his job after lying about his affair with young model Christine Keeler, who was also linked to a Soviet captain at the same time. The magnitude of the scandal even prompted the resignation of Harold Macmillan’s Conservative government over the loss of credibility.

Today in 1963 the British Secretary of State for War, John Profumo, resigns in a sex scandal known as the "Profumo affair". pic.twitter.com/ZLwYkJ8XHU

Margaret Thatcher’s Junior Health Minister Edwina Currie lost her job in 1988 over the salmonella-in-eggs scandal, but it was not only this controversy that is now forever linked to her name. The former official turned writer admitted in her ‘Diaries’ that she'd had a four-year affair with future Prime Minister John Major while both were married.

He didn't resign, either https://t.co/coMrVOtBqu

Child Born Out of ‘Love’?

Former Trade and Industry Secretary Cecil Parkinson was also forced to quit his job in 1983 after it was revealed that the married official had fathered a child with his then-secretary Sara Keays. Parkinson’s career went uphill several years later with a high-profile appointment as the Secretary of State for Energy. It was widely reported in the media though that he had no intention of meeting his daughter Flora Keays, who'd had some serious health issues since birth.

Parkinson paid child maintenance, but only because a court forced him to. Most unpleasantly, in his will he left nothing for Flora, despite being a wealthy man. [pic shows him with long-suffering wife, Anne] 😖✊🇻🇳🇪🇺 #ToriesOut #crooks #liars #ReleaseTheRussiaReport pic.twitter.com/NgP67VuUVa

Lord Blunkett resigned from his Home Secretary post in 2004 following a scandal around his three-year affair with former Spectator magazine publisher Kimberly Quinn. David Blunkett was not married at the time, unlike Quinn, who'd had a history of extramarital affairs. During their relationship, Quinn gave birth to one son and became pregnant with another one. The DNA tests later confirmed that Blunkett was the father of her first son, but not the second one.

Today in 2002 the UK Home Secretary, David Blunkett, resigns after an email implicates him in using his position to grant favours to his ex-lover, Kimberly Quinn, the married American publisher of The Spectator magazine. pic.twitter.com/oR2BHgg9bd

Boris Johnson and All His Babies

The current UK prime minister could have his picture placed in dictionaries next to the definition of 'turbulent sex life'. Johnson has recently tied the knot for the third time – he married the mother of his one-year-old son, former Tory head of communications Carrie Symonds. Previously he was married twice: to Oxford University sweetheart Allegra Mostyn-Owen and his childhood pal Marina Wheeler.

Wheeler and Johnson got married just 12 days after his first divorce, when she was already pregnant with their first child Lara Lettice. They had three more children during their 25 years of marriage that were marred with a number of sex scandals, including his alleged affair with Spectator journalist Petronella Wyatt, that cost him a post on the Conservative front bench. Another one resulted in an illegitimate child with arts consultant Helen Macintyre, while his relationship with American tech entrepreneur Jennifer Arcuri put him in hot water over the alleged misuse of public money. This scandal is still ongoing.

Not only did Boris Johnson provide one of his courtesans with public money luxury travel & accommodation he paraded her in front of The British Public how's that for rubbing our faces in it pic.twitter.com/UmI5o5vwhp