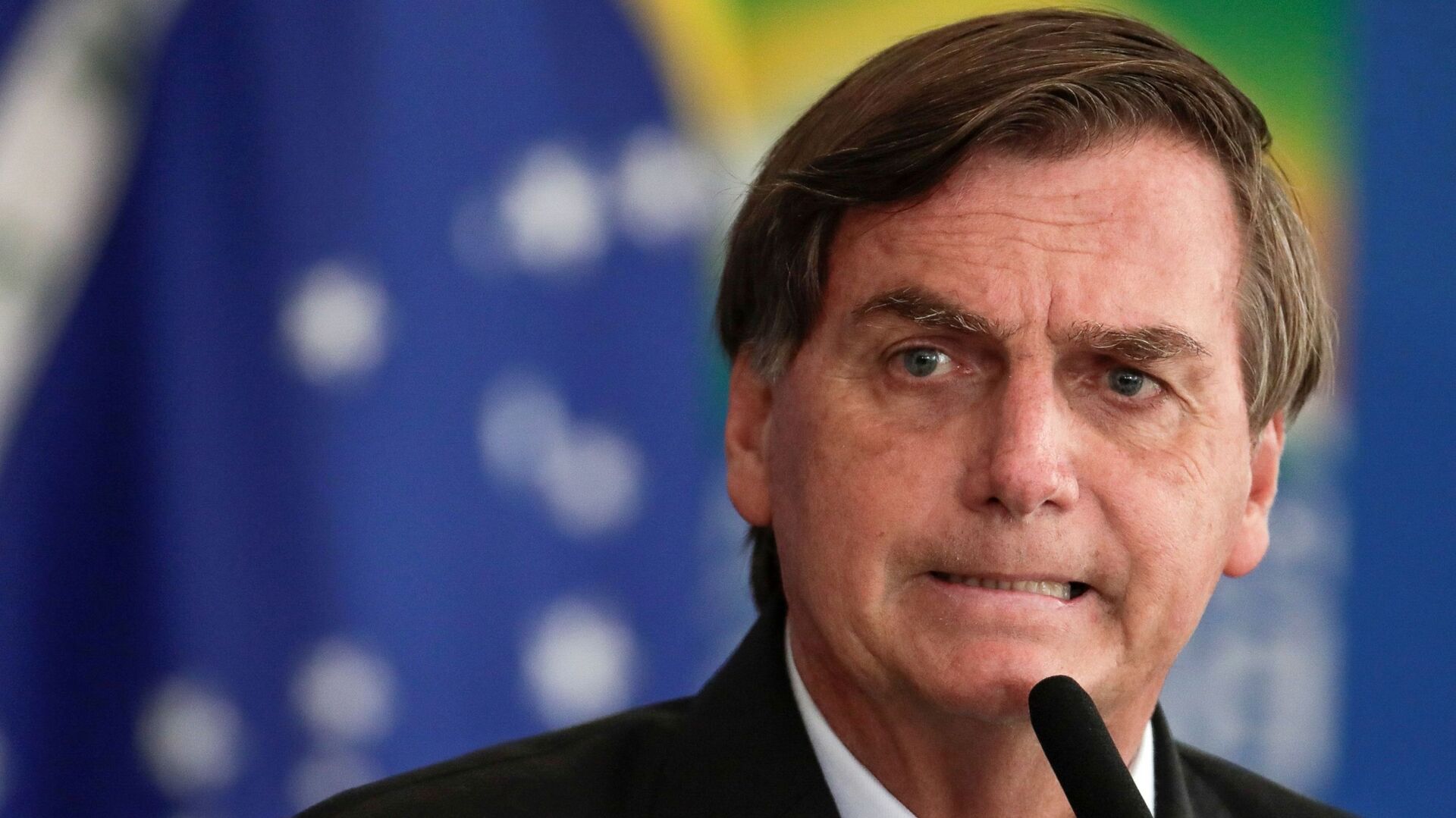 Svetlana Ekimenko
All materialsWrite to the author
Among the “offensive” statements cited in the filed lawsuit are remarks by Brazilian President Jair Bolsonaro himself against journalists, some of them of a sexual nature, as well as those attributed to the Minister of Economy, Paulo Guedes, and Damares Alves, Minister of Human Rights, Family and Women.

A Brazilian federal judge has ruled to sanction the government of President Jair Bolsonaro for its "repeated" statements that are "discriminatory against women," attributed to both the president and several of his ministers, reported Brazilian media on Friday.

The ruling, which can still be appealed, establishes that the Government must pay a fine for collective moral damages to women's movements, estimated at five million reais (one million dollars), while also allocate double that amount to promote official awareness campaigns against domestic violence and sexual harassment. 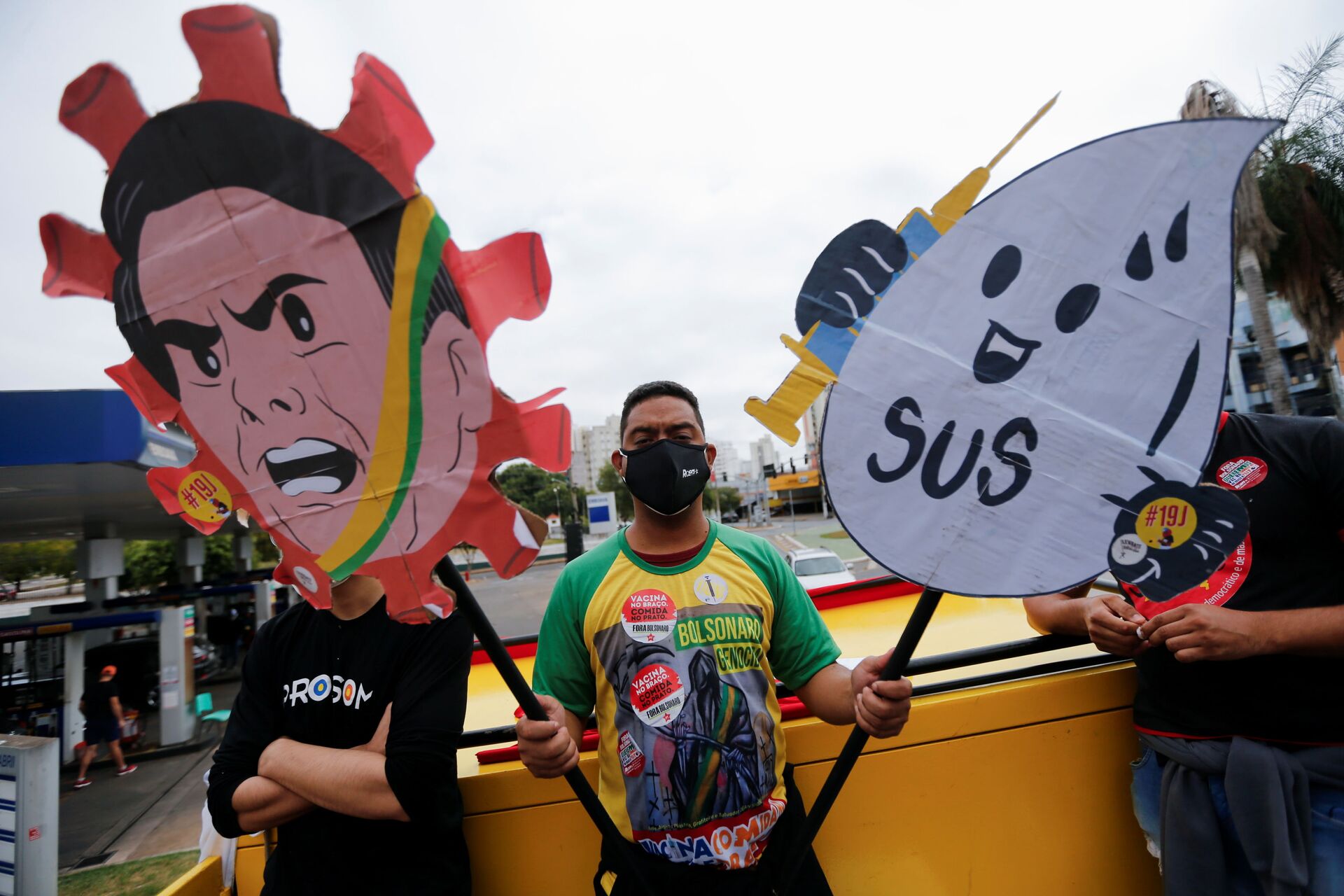 People participate in a protest against Brazil's President Jair Bolsonaro and his handling of the coronavirus disease (COVID-19) pandemic in Cuiaba, Brazil, June 19, 2021.
© MARIANA GREIF

The decision, announced by Judge Ana Lúcia Petri, followed a lawsuit filed last August by the Federal Public Ministry. The ruling determined that the aforementioned statements of a "discriminatory nature in relation to women have caused negative consequences for the entire Brazilian society and moral damages of collective dimensions". The remarks were deemed an unconstitutional abuse of the freedom of expression in the performance of state power.

Listed in the lawsuit were statements by Minister of Economy Paulo Guedes, Minister of Human Rights, Family and Women Damares Alves, other government officials, and President Jair Bolsonaro himself.

The latter referenced the political leader’s numerous controversial remarks targeting women, as well as gay people and other minorities that have raised eyebrows and concerns. Some were aimed at journalists and were of a sexual nature.

“I’ve got five kids but on the fifth I had a moment of weakness and it came out as a girl,” Bolsonaro told an audience at the Clube Hebraica in Sao Paulo in April 2017.

In an exchange with congresswoman Maria do Rosario in Brazil’s lower house in 2014 Bolsonaro was cited as saying: “I wouldn’t rape you because you don’t deserve it.”

Rosario later argued his comments had encouraged sexual assault. In a subsequent newspaper interview, Bolsonaro said Rosario was “not worth raping; she is very ugly”.

On 6 July 2019 the President said that Brazil is a "virgin that every foreign pervert wants", as he discussed the process of demarcation of indigenous lands and deforestation in the Amazon.

Bolsonaro was earlier accused of inciting hatred towards LGBT people after declaring the South American country should not become a “gay tourism paradise”.

“If you want to come here and have sex with a woman, go for your life… But we can’t let this place become known as a gay tourism paradise,” Bolsonaro reportedly told journalists in the capital, Brasília, in 2019, according to the magazine Exame.

Earlier in the year, a Brazilian court ordered President Jair Bolsonaro to pay compensation to a journalist after making degrading comments about her. In 2020 Bolsonaro had suggested Patrícia Campos Mello, award-winning reporter for Brazilian daily newspaper Folha de S.Paulo, had offered sex to a source for negative information about him. Campos Mello later hailed the judge's decision as a "victory for all of us women".

In the case of Damares Alves, an evangelical pastor, one of the statements considered "discriminatory" by the court referred to the "submission" that, according to the minister, a woman should show towards a man, in remarks made by the minister at a hearing held in the Chamber of Deputies.
As for Brazil’s Economic Affairs Minister, he described Brigitte Macron, wife of the French President Emmanuel Macron, as “really ugly”.

“The President said it, and it’s true. That woman is really ugly,” said Paulo Guedes, following uncomplimentary comments by the Brazilian President himself that had aroused indignation in France and in Brazil.