Trump General Rejected Calls for Military to ‘Beat the F**k Out' of Protesters, Claims New Book 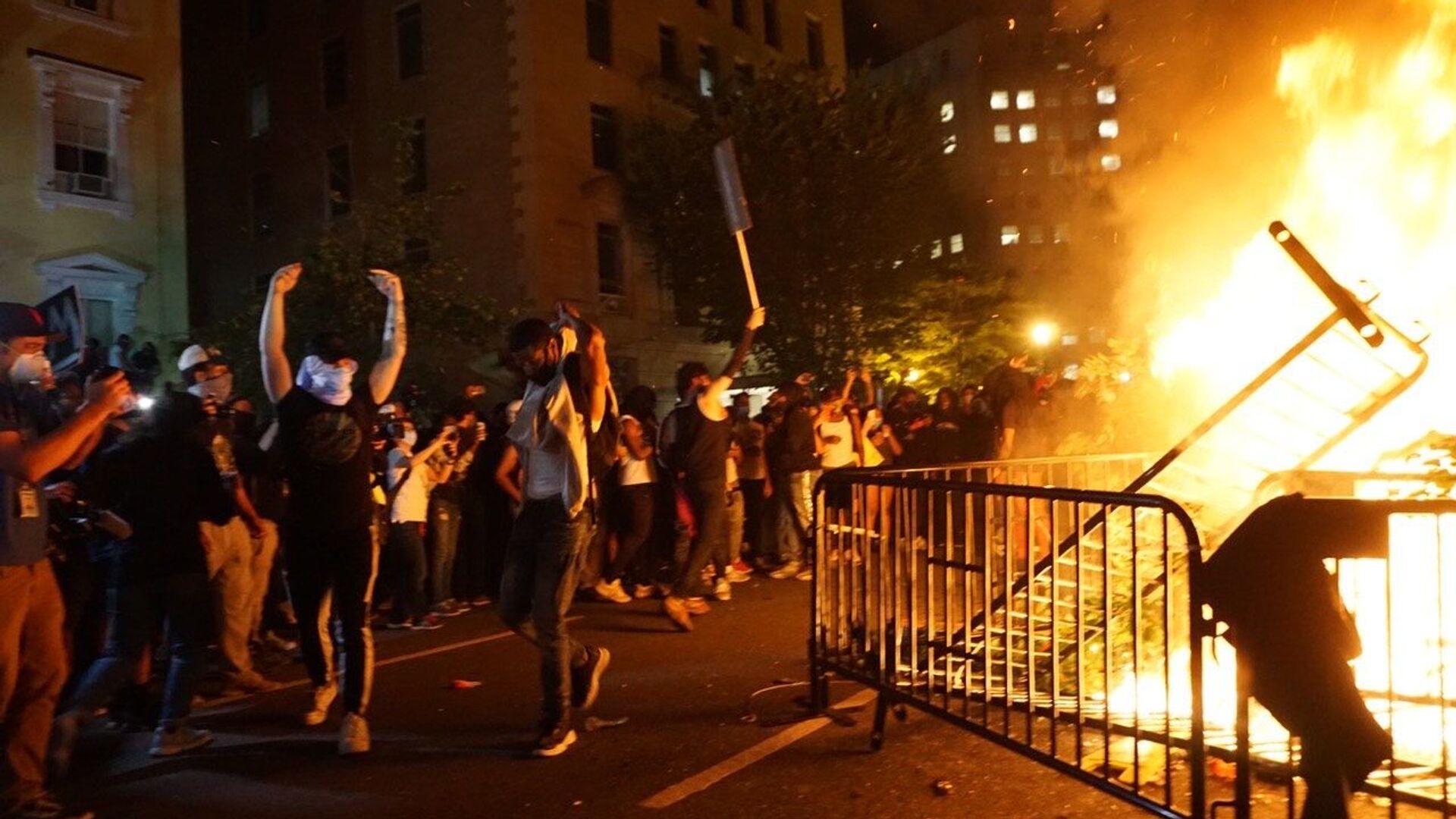 Svetlana Ekimenko
All materialsWrite to the author
A plethora of books have emerged embracing the so-called Donald Trump genre, penned by Mary Trump (Too Much and Never Enough), John Bolton (The Room Where It Happened), Bob Woodward, and Michael Cohen. Michael Bender, senior White House reporter for the Wall Street Journal, now offers his take on the 45th President’s final year in office.

Donald Trump repeatedly argued that the military should intervene more decisively to quash protests that gained force in Seattle and Portland last year against police brutality and racism, triggered by the death of black former convict George Floyd, claims a new book, excerpts of which were cited by CNN.

As tensions flared between Trump and top Pentagon officials ahead of the November 2020 presidential election, Joint Chiefs Chairman Gen. Mark Milley was often the only one who attempted to oppose those calls, according to "Frankly, We Did Win This Election: The Inside Story of How Trump Lost," penned by Wall Street Journal reporter Michael Bender.

These stories in Michael Bender’s new book are wild: pic.twitter.com/6PCIG7uiyH

With protests, spearheaded by the Black Lives Matter (BLM) movement, gaining increasing attention on cable news outlets, writes Bender, the discussions in the Oval Office gained in intensity. When footage from the events showed law enforcement in an increasingly physical standoff with protesters, then-President Trump would reportedly respond by saying:

"That's how you're supposed to handle these people… Crack their skulls!"

The 45th POTUS would purportedly urge his top law enforcement and military officials to wade into the unrest and "beat the f**k out" of the demonstrators.

"Just shoot them”, excerpts from the new book, set to be released on 10 August, suggest that Trump said on multiple occasions inside the Oval Office.

General Milley and then-Attorney General William Barr would often succeed in toning down the debate, however, with Trump supposedly conceding:

"Well, shoot them in the leg—or maybe the foot… But be hard on them!" 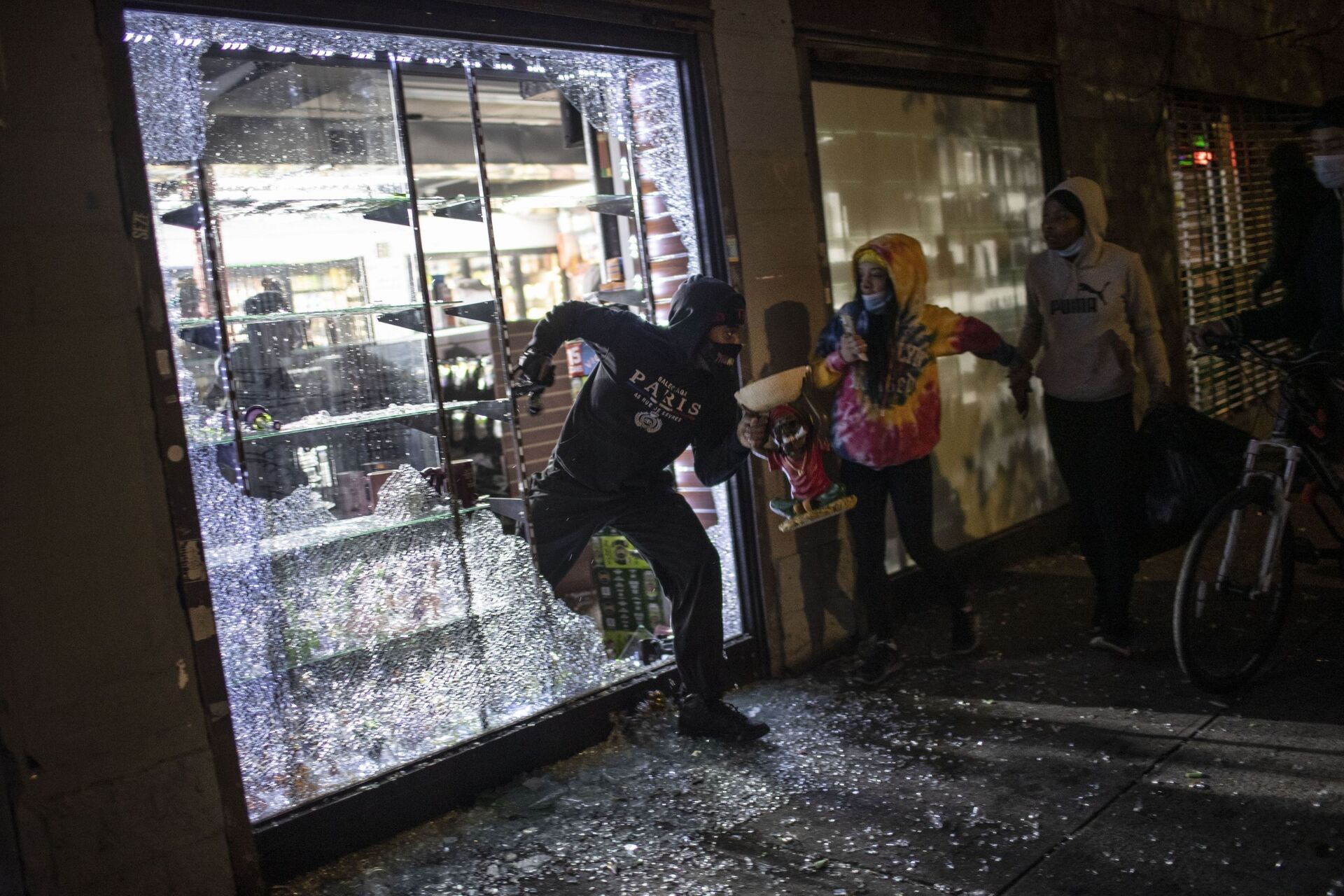 People run out of a smoke shop with smoking instruments after breaking in as police arrive on Monday, June 1, 2020, in New York. Protests were held throughout the city over the death of George Floyd, a black man in police custody in Minneapolis who died after being restrained by police officers on Memorial Day
© AP Photo / Wong Maye-E

In May 2020, massive protests against racial discrimination and police brutality had been triggered by the death of newly-unemployed African-American bouncer George Floyd, who had served several jail terms on charges ranging from aggravated robbery to drug possession.

Floyd was arrested on 25 May 2020 after a shop clerk called the police claiming a customer had used a forged banknote. Officers who arrived at the scene handcuffed Floyd and tried to put him in a police car. In the ensuing scuffle, Floyd was pinned to the ground, with Derek Chauvin, one of four police officers, placing his knee on the man’s neck. 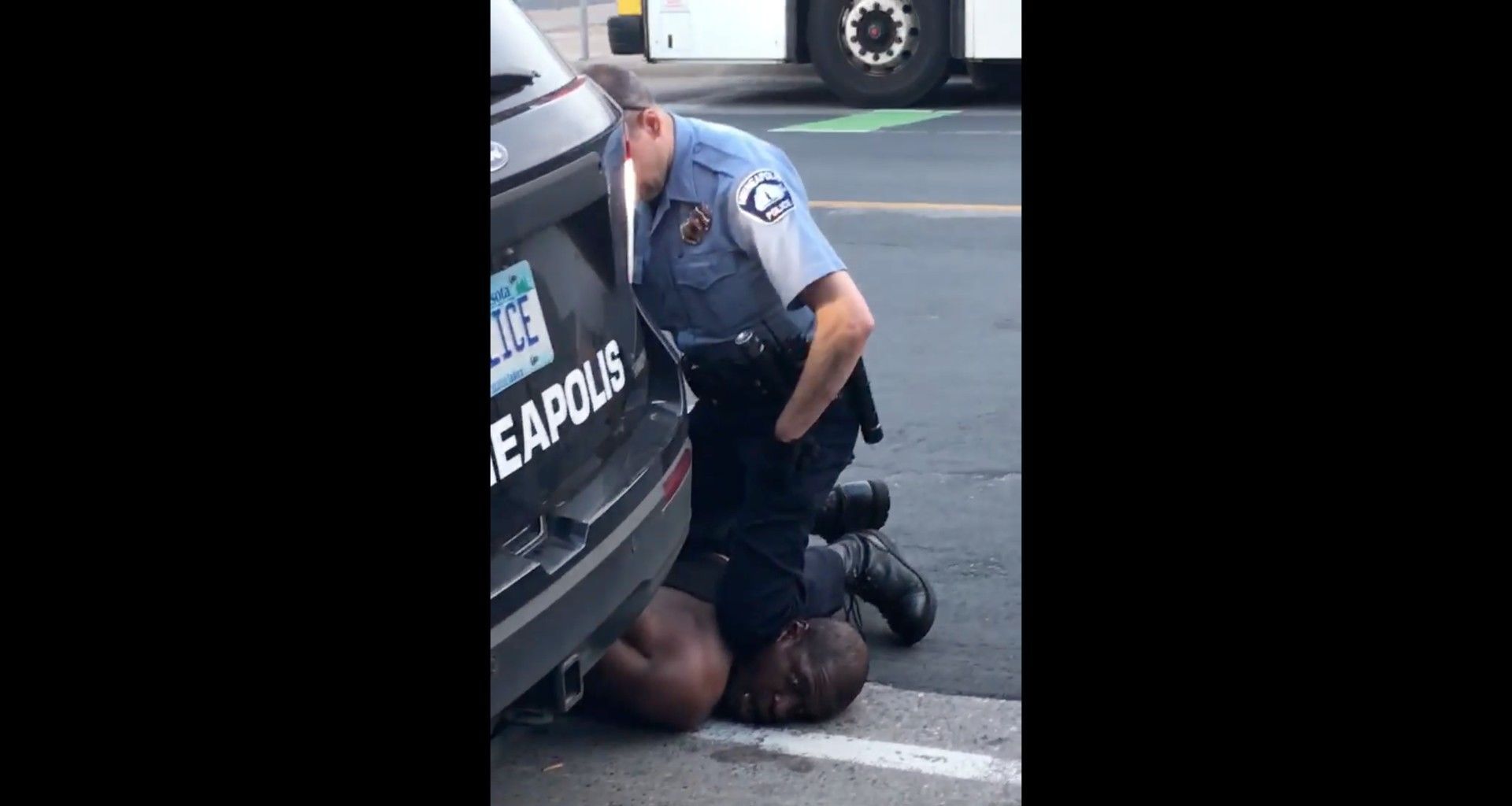 Floyd told police officers more than 20 times that he was unable to breathe, but despite his pleas, the officer maintained pressure on his neck for almost nine minutes.

Demonstrations over the police killing of George Floyd were held in the city of Portland, Oregon, as well as other cities in the United States, with many protests marred by rioting, heated confrontations with law enforcement, instances of arson, looting, and vandalism. 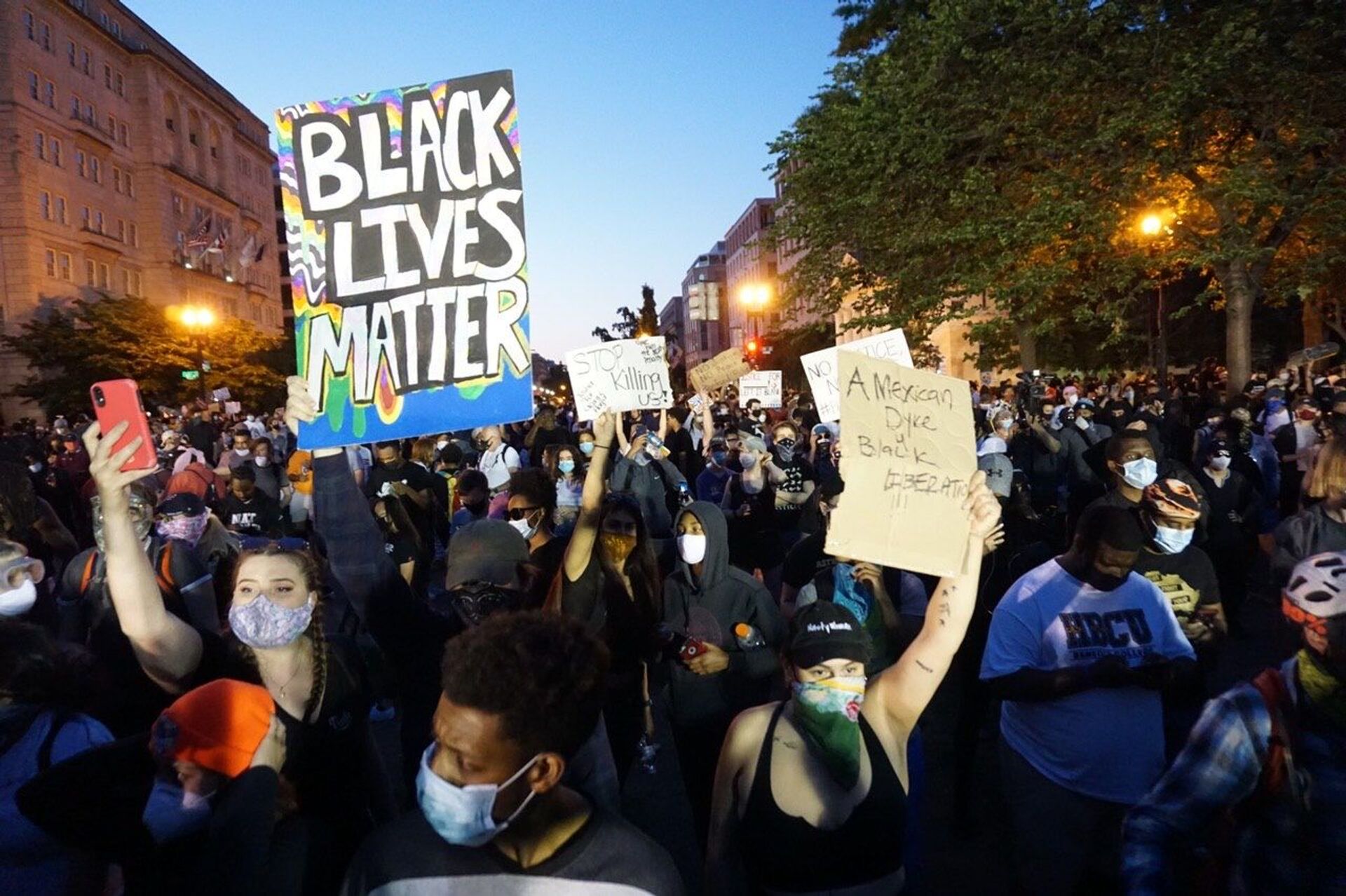 While some top White House officials sought to encourage the then-President in his calls for a more aggressive pushback, Milley would reportedly attempt to douse the inflamed calls.

Thus, a passage in the book claims that during one Oval Office debate, senior Trump adviser Stephen Miller responded to footage of the protests by deploring the fact that American cities had been turned into war zones.

"These cities are burning," Miller exclaimed, according to the book. Milley is described as swiftly retorting:

‘What We Have is a Protest’

The nation's highest-ranking military officer was reportedly concerned lest Trump decide to invoke the Insurrection Act in the wake of civil unrest. The move would have sent the military out into the streets against civilians. While never invoking the Act, Donald Trump is described as having repeatedly suggested doing so towards the end of his White House stint.

General Milley and Defense Secretary Mark Esper were opposed to the idea, first floated by Trump in June 2020 following protests against police brutality and racial injustice in the wake of George Floyd's death, writes the author.

The Chairman of the Joint Chiefs of Staff regarded the developments unleashed by Floyd's death as a political problem rather than a military one.

Milley’s outburst suggested to others in the room that he thought Miller was out of his lane. And inside the Oval Office, America’s top general protected his turf as vigorously as anyone in the Trump administration.

Order the book now for other examples: https://t.co/MWjyA6ou0V

General Milley is suggested as having advised Trump that the National Guard had enough reserves to enforce law and order amid the protests.

Invoking the Insurrection Act, Miller ostensibly argued, would shift responsibility for the protests from local authorities directly to the President. According to an excerpt in the book, the General pointed to a portrait of President Abraham Lincoln hanging on the wall and told Trump:

"That guy had an insurrection… What we have, Mr. President, is a protest."

Several senior officials alongside Milley faced an increasingly frustrated and “volatile” Trump during the final months of his presidency, writes the author, who claims to have interviewed over 150 people, including the ex-President, as part of research for the volume.

There has not been any official comment from Donald Trump or General Milley regarding the claims made in the volume.

The book by the senior White House reporter for the Wall Street Journal touts itself as a detailed account of Donald Trump’s final year in office and the 2020 presidential campaign that resulted in his failed reelection bid.