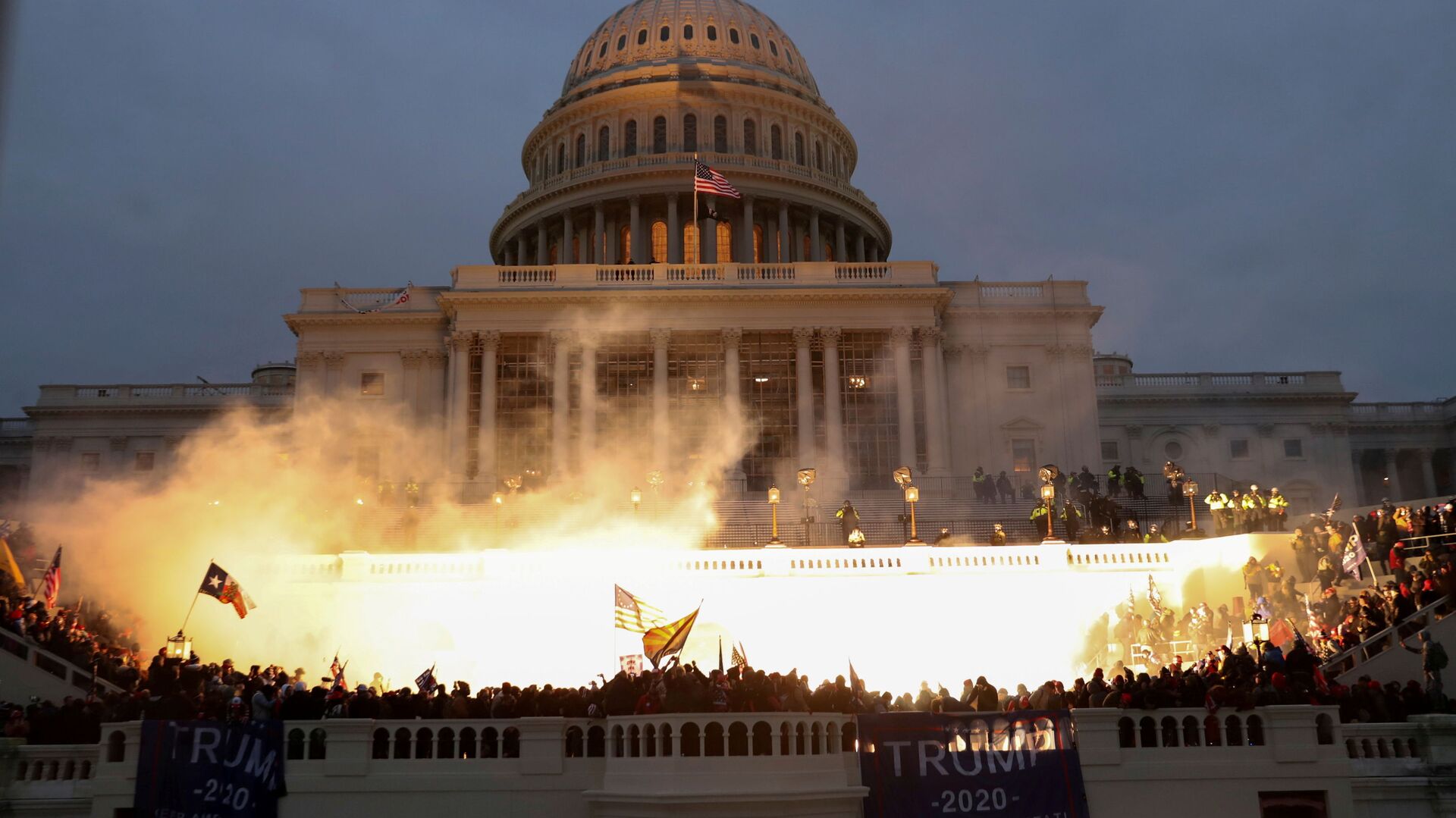 © REUTERS / Leah Millis
Subscribe
International
India
Africa
Kirill Kurevlev
Managing Editor
All materialsWrite to the author
Earlier, the US media had circulated information that some supporters of the QAnon conspiracy theory are waiting for the summer with the hope of a "military coup", which, they believe, will return Trump to power to continue his fight against a pedophile sex trafficking ring within the US government, which proponents of QAnon allege exists.

A top official at the US Department of Homeland Security (DHS) told members of Congress on Wednesday that the conspiracy theory that Donald Trump will be reinstated as president in August has raised certain concerns, Politico reported, citing people familiar with the closed briefing.

According to the report, John Cohen, the department's senior counterterrorism official, spoke before the House Committee on Homeland Security in a members-only briefing.

One of the committee members, Democrat Rep. Elissa Slotkin, questioned Cohen at the briefing on how the Department of Homeland Security is tracking the spread of disinformation and conspiracy theories, as well as how such speech may drive violence.

She explicitly mentioned the conspiracy theory that Trump will be put back in office in August, and probably as a result of a military coup, a theory that US mainstream media claimed Trump has reportedly encouraged within his inner circle.

However, DHS is not aware of any particular, credible threats of violence tied to the conspiracy theory surrounding Trump's reinstatement, according to Cohen. Nonetheless, he emphasized that the department is monitoring internet discussions about the matter among communities labeled extremist by the US government.

And he said it is causing anxiety among department officials because it feeds the narrative that the election was rigged, which might provoke a violent reaction from some extremists. 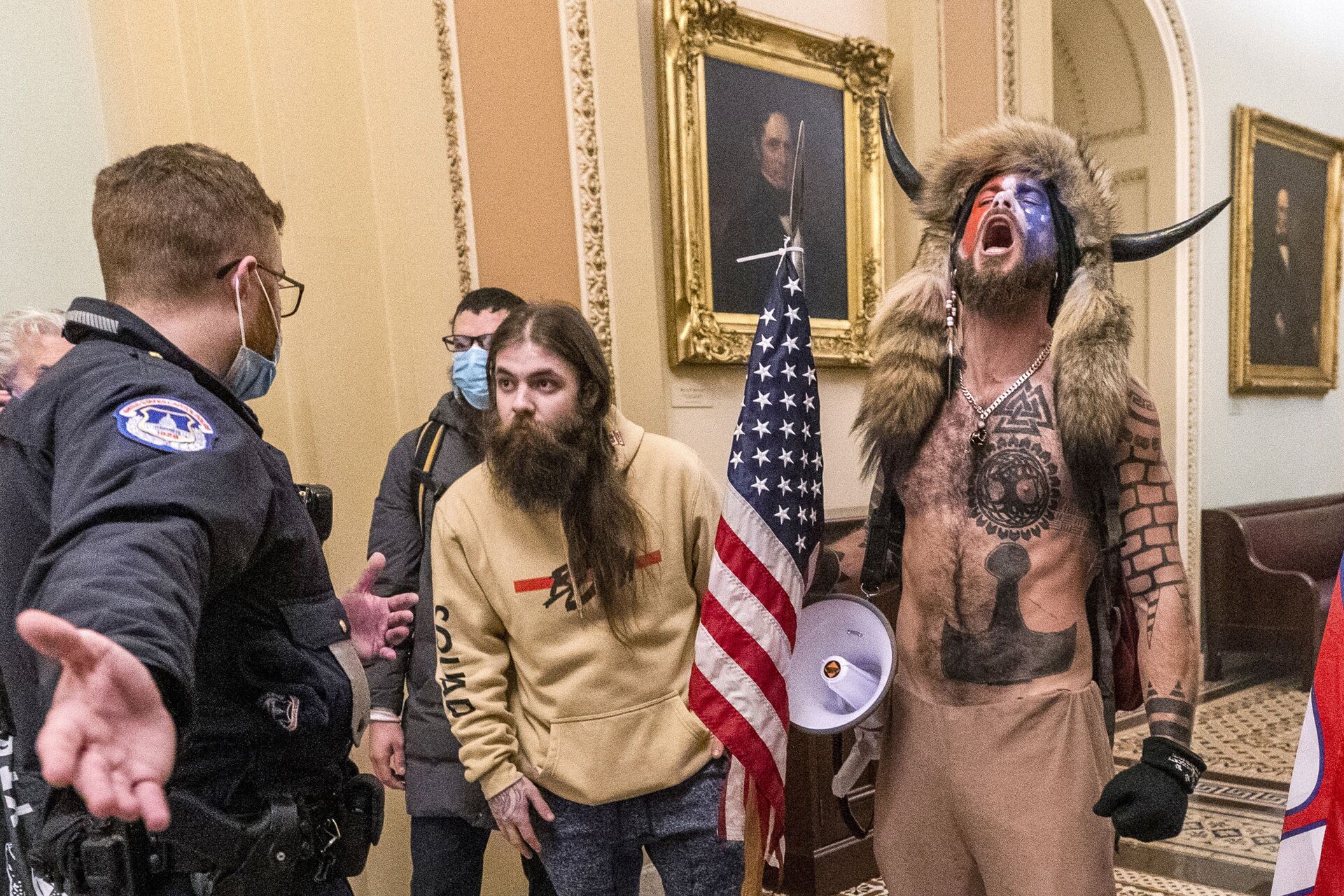 FILE - In this Wednesday, Jan. 6, 2021 file photo, supporters of President Donald Trump, including Jacob Chansley, right with fur hat, are confronted by U.S. Capitol Police officers outside the Senate Chamber inside the Capitol in Washington. Congress is set to hear from former security officials about what went wrong at the U.S. Capitol on Jan. 6. That's when when a violent mob laid siege to the Capitol and interrupted the counting of electoral votes. Three of the four testifying Tuesday resigned under pressure immediately after the attack, including the former head of the Capitol Police.
© AP Photo / Manuel Balce Ceneta

Politico noted that reports of Trump's return have begun to appear in recent months. Most of them have come from conspiracy theorists such as pillow businessman Michael Lindell, also known for the movie "Absolute Proof," about the US presidential election fraud and concerns about the vote's legitimacy. Earlier this week, Lindell claimed that it was him who allegedly inspired the former president to believe in those claims.

In addition, at the QAnon conspiracy theorists' conference in early June, Trump's ex-national security adviser Michael Flynn claimed that a military coup similar to the one that took place in Myanmar, when the military removed the civilian government, could happen in the US.

Earlier this month, Trump himself made a vague statement that the Republican party will take over the Congress and the White House "sooner than you think," and it is "going to be really something special."

More than six months after the election, Trump continues to publicly dispute the results of the 2020 election. He announced last month that he will start referring to his electoral loss as "the Big Lie."

What if Capitol Riots & QAnon Were FBI's Handiwork to Entrap Trump Supporters, Journo Wonders
The Biden administration has prioritized the fight against domestic terrorism, including supporters of such conspiracy theories. Earlier this month, the White House produced a strategy document outlining its approach to the problem. In addition, the Department of Homeland Security has established a dedicated team of intelligence analysts that are solely focused on the subject.

Nevertheless, some civil rights activists in the US are reportedly concerned about increased government surveillance of activities protected by the First Amendment.

QAnon is a conspiracy theory according to which Democrats allegedly organized a network of social exploitation of minors in a Washington restaurant, and former Republican President Donald Trump allegedly led the battle against them. Initially, this theory, which has no confirmation, appeared on little-known forums, but has since become a significant political phenomenon.