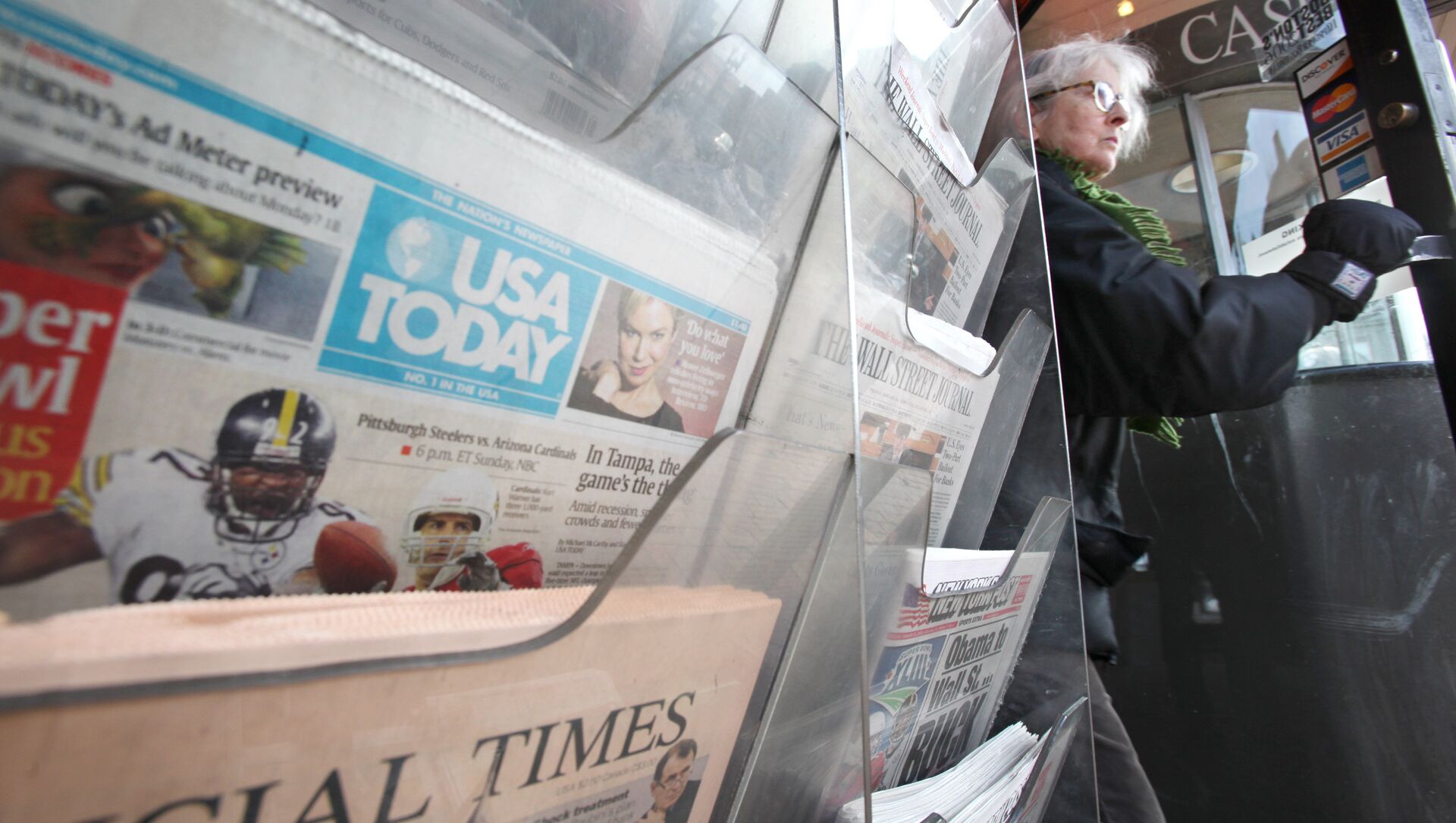 Ekaterina Blinova
All materialsWrite to the author
American corporate journalists continue to go on air with Project Veritas, exposing bias, "fake news" and double standards at their places of work. However, the problem is much deeper, says US independent journalist Max Parry, commenting on the erosion of public trust in the US traditional media.

On 22 June, CBS 62 Detroit meteorologist and multimedia journalist April Moss came forward to complain about "fake news", editorial double standards and the prevalence of corporate interests over true journalism. Moss became the second journalist in a month to go public with Project Veritas.

Earlier in June, Ivory Hecker, a former Fox 26 reporter, revealed that COVID-related stories were buried to "favour advertisers and satisfy the opinion of the station’s general manager and the network CEO" at expense of transparency and objectivity.

Why is Trust in Media So Low in the US?

In 2017, Project Veritas, a conservative activist group founded by James O'Keefe in 2010, kicked off a series titled "American Pravda" with the aim to debunk US mainstream media lies. Over the past four years Big Media employees and bosses have been repeatedly caught on hot mic by PV demonstrating political bias and admitting that they were manipulating media narratives.

The US mainstream press has also been caught practising a sort of "political hit job" against certain American officials. In December 2020, PV exposed CNN's top brass targeting then-president Donald Trump and pushing a negative narrative against him as he contracted COVID. At the same time, the broadcaster apparently tried to "bury" The New York Post's bombshell reports about Joe Biden's son Hunter Biden, according to PV.

For its part, CBS' 60 Minutes pushed a story alleging that GOP Florida governor Ron DeSantis provided the state's coronavirus vaccines to the rich and instrumentalised the COVID jab rollout to benefit donors. Democratic state officials, conservative pundits and Floridians confronted 60 Minutes over selectively editing the video to hide facts, and omitting data that debunked its thesis. CBS acknowledged the criticism but neither retracted the story nor apologised to the governor.

The Fox News contributor/Senior Editor of The Federalist breaks down the details of the atrocious, deceitful hit job CBS News attempted on Florida Gov. Ron DeSantis.

"Scandals like the firing of April Moss do indicate the increased political strife within the country but also explain why so many Americans, regardless of political affiliation, do not trust the media," says American independent journalist Max Parry. "Surveys consistently show that confidence in the media among citizens is at an all-time low. A [2016] study by the Associated Press's Media Insight Project even showed that only 6 percent of Americans had a great deal of trust in the mainstream news."

Thus, it appears hardly surprising that the latest Digital News Report 2021 from the Reuters Institute for the Study of Journalism at Oxford found that the United States ranks last in media trust among 92,000 news consumers surveyed in 46 countries. Only 29 percent of American respondents said they trust the news, compared to 54 percent in Brazil and 39 percent in Indonesia. 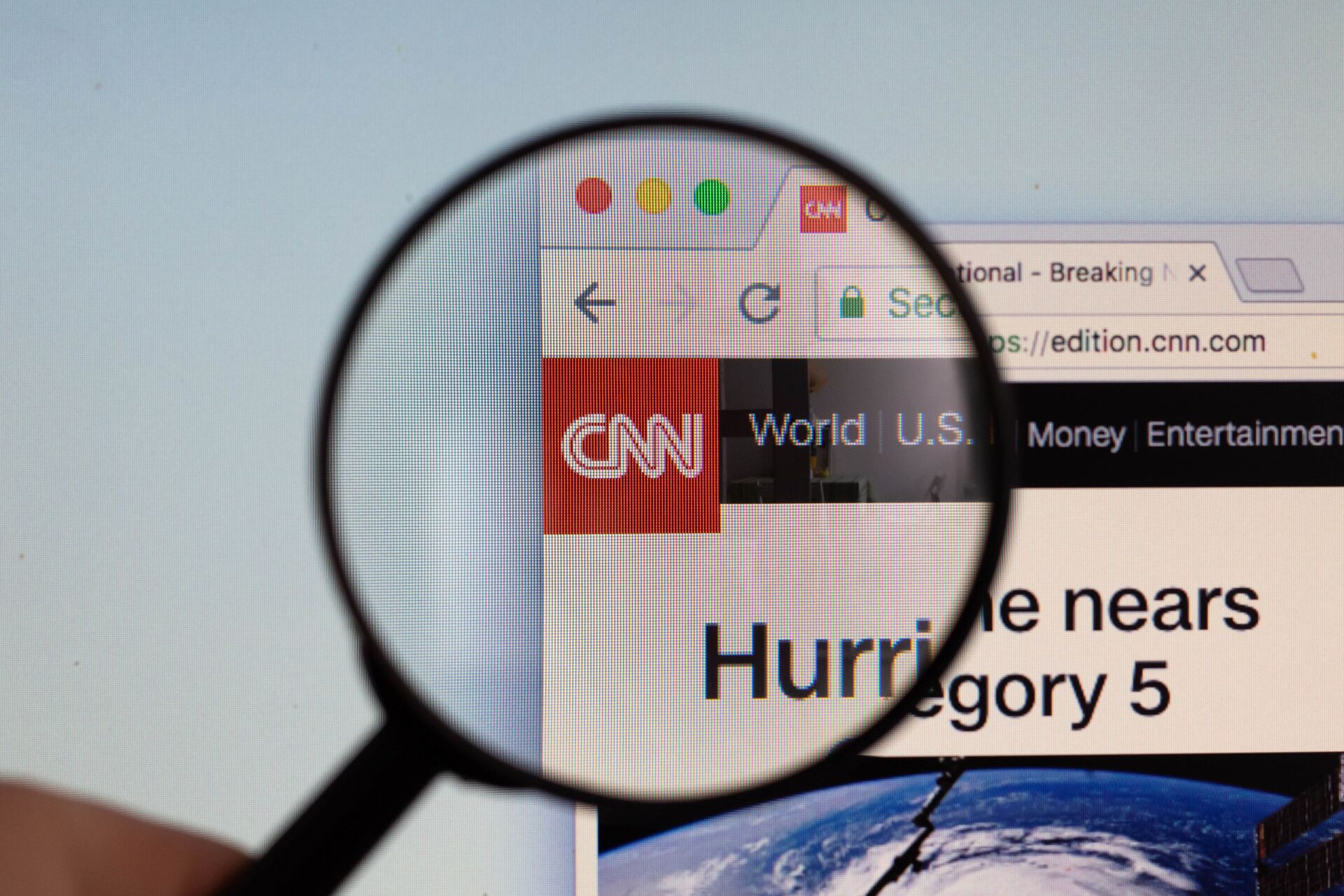 CNN logo on a computer screen with a magnifying glass
CC BY 2.0 / Marco Verch /

US Establishment Using the Media as Tool

Presently, the media is "undeniably fuelling the widening rift between 'red America' and 'blue America' and stoking the flames of the divisions in the country that reached a zenith in the 2020 election," Parry notes, adding that the group Project Veritas cannot boast being completely impartial and objective itself.

The journalist argues that the blame for the unfolding situation lies with the US establishment that is using the press as a weapon to achieve its political aims.

"Alexandria Ocasio-Cortez, for example, the Democratic Party's rising star, openly called for media censorship after the 6 January riot at the US Capitol in order to 'rein in disinformation and misinformation' which has truly dangerous implications," Parry says. "The irony is that what AOC believes the government should be doing is already being done by social media platforms and Silicon Valley tech monopolies which heavily curate what Americans see, hear and read in terms of news consumption." 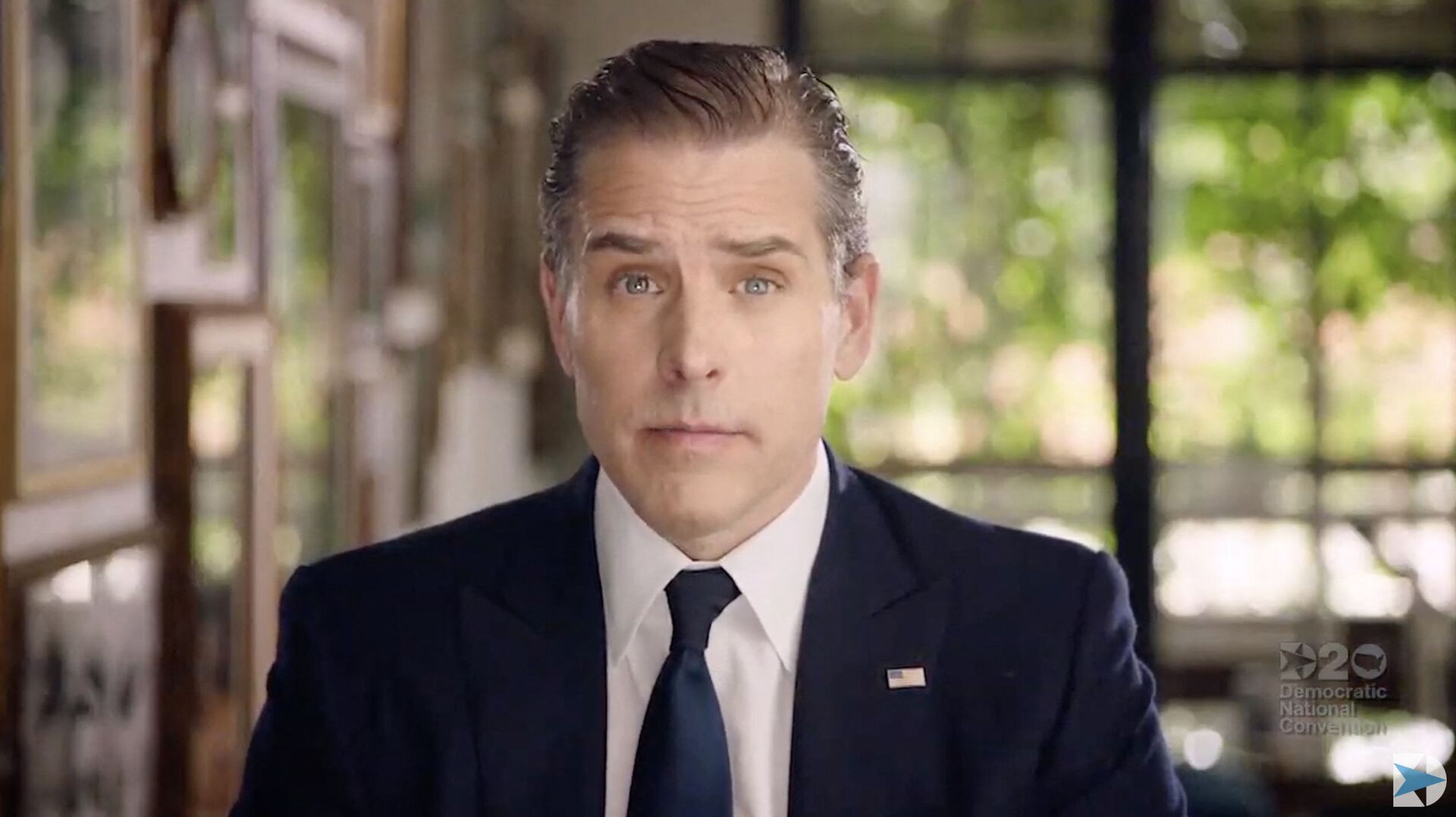 (FILES) In this file photo video grab made on August 20, 2020 from the online broadcast of the Democratic National Convention, being held virtually amid the novel coronavirus pandemic, shows former vice-president and Democratic presidential nominee Joe Biden's son Hunter Biden speaking during the last day of the convention.
© AFP 2022 / -

The unprecedented level of censorship which has manifested itself in silencing the Hunter Biden laptop story during the 2020 race reached its apogee after the Capitol riot: then-sitting President Trump was suspended from social media, media platform Parler was removed from Google and Apple app stores while Facebook took down posts that contained the hashtag "Stop the Steal", the American journalist points out. Eventually, Big Media and Big Tech were rewarded for that by the new US administration, according to Parry.

"If you look at the alignments within the Biden administration, it is essentially a takeover by the Big Tech giants and Silicon Valley magnates, where the Biden cabinet is rewarding execs from Facebook, Google and other tech corporations for their suppression of speech," he says.

Still, political bias behind the widespread censorship in media is not really just against conservatives, Parry notes, adding that it includes "unfair discrimination toward any anti-establishment views".

"This is why it is so dangerous for anyone on the actual political left to be supportive of the censorship of conservative voices because it will inevitably backfire on them," he warns. 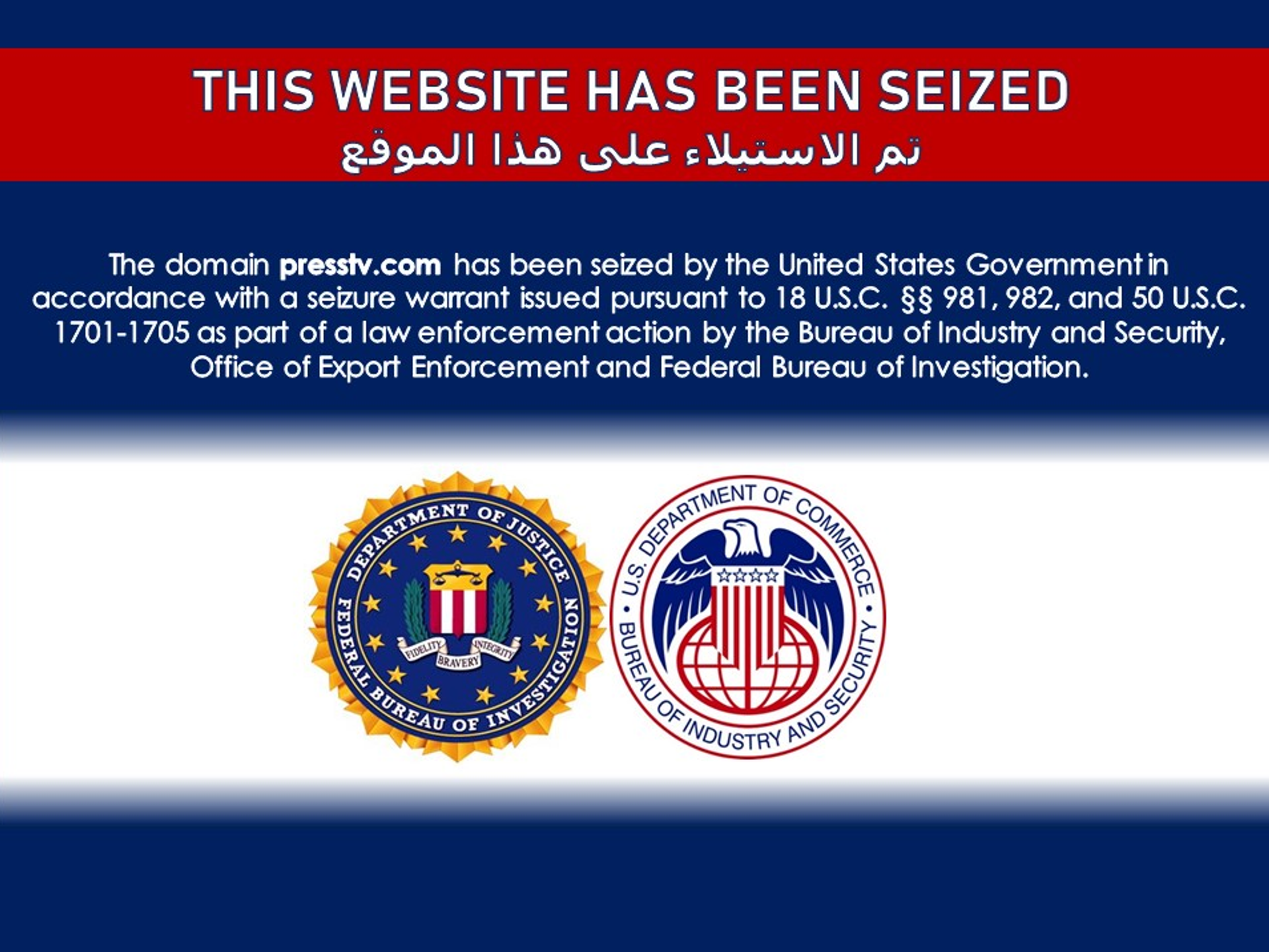 Message displayed when navigating to the PressTV website on June 22, 2021.
© Sputnik Screenshot

Meanwhile, in addition to using Big Media and Big Tech for shaping the establishment-favoured narrative at home, Washington is also trying to crush any competing narrative from outlets speaking on behalf of "rogue" countries "targeted for regime change", according to the independent journalist.

One glaring example is the latest shutting down of 33 websites used by the Iranian Islamic Radio and Television Union (IRTVU) and three websites operated by the Iraqi Shia paramilitary group Kata’ib Hizballah (KH) over alleged "malign influence" and "disinformation" operations.

"The Department of Justice has just seized Press TV and more than 30 outlets affiliated with Iran which have a very small stake in the Western media market. How can they possibly be a threat when the audience they have in America is so minimal?" Parry asks.

According to the independent journalist, this case "demonstrates the present fragility of US political power internationally when dissenting voices are being suppressed internally". The apparent attempt to silence the Iranian media, such as Press TV and Al-Alam, has proven futile as they very soon were back online using other domain names.

"This shows how desperate the US is to maintain control of the narrative as its geopolitical hegemony is in a state of decline," Parry concludes.