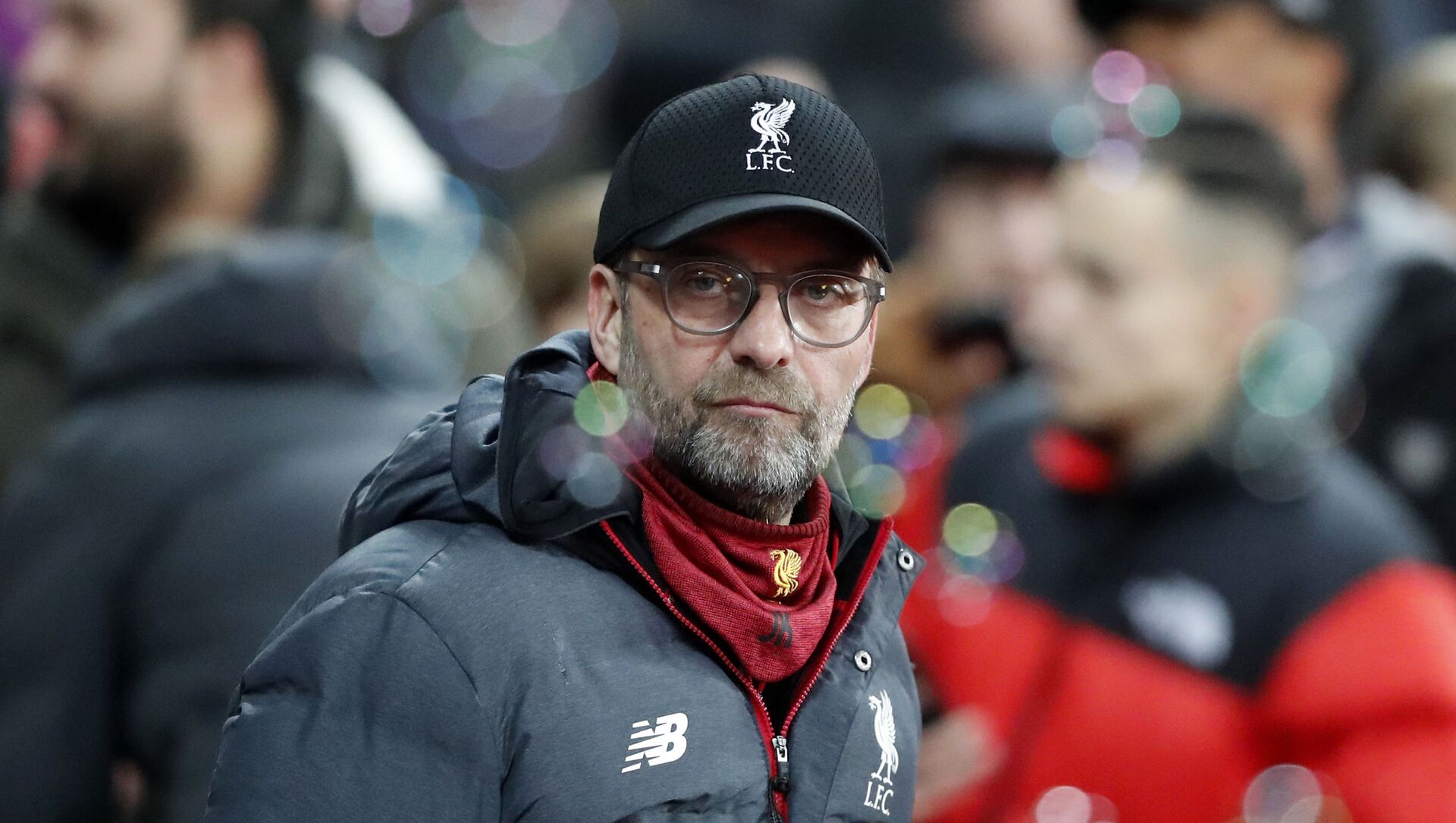 © AP Photo / Frank Augstein
Subscribe
Svetlana Ekimenko
All materialsWrite to the author
Having secured a place in the knockout stages of the Euro 2020, the England team was able to sit back and watch the final set of group games on Wednesday night, eager to learn who they would face as runners-up from Group F, dubbed the “Group of Death”.

“Yes, he has been in touch. As soon as the final whistle went he just sent a smiley face emoji!”

Henderson, the sole representative of Liverpool FC in the England national football team, also known as The Three Lions, at the tournament, extolled Klopp’s “influence at Liverpool, saying:

“…Because of the charisma he's got a lot of people love him even if you're a neutral fan... So he's been a big part of English football in the Premier League.”

“The charisma he has got, a lot of people love him even if you're a neutral fan. He's had a big part [to play] in English football in the Premier League.” #awlive [sky] pic.twitter.com/Wd2hbf0TlC

Into the knockout stages. 🔵#Euro2020 pic.twitter.com/OzgbPD7mdZ

Germany advanced from the European Championship Group F to score late against Hungary on 23 June.

The team’s convincing 4-2 win against Portugal was followed up with a nerve-wracking 2-2 draw against underdogs Hungary that allowed Germany to finally clinch the clash with England at Wembley next Tuesday.

Despite England having suffered in major tournaments at the hands of the Germans, Henderson insisted:

“We don't think too much about the history. It's about the here and now for us. We're focusing on what Germany are good at, the areas we can exploit, what we can do to hurt them.”

Jordan Henderson also weighed in on the possibility that England will have to face penalties if there is a tie. England’s Gareth Southgate missed such a shot against the Germans at Euro 96. The footballer made reference to how three years ago the Three Lions won a shootout to beat Colombia on their way to a World Cup semi final.

“Overcoming the penalty shoot-out in the World Cup was a big thing mentally for everyone. So I do feel as though we've improved with that, over the last few years, definitely, and again that's going to be a big thing on Tuesday. We always practice penalties all the time. We take it seriously. It’s important you’re clear in your mind if you do need to take a penalty,” said the Reds midfielder.

He added: “The gaffer will decide his penalty takers on the night. But I’ll always take one.”

🎙Joshua Kimmich 🇩🇪 on facing England: "We are optimistic because we already showed a good performance against Portugal. I’m looking forward to it to be honest. There are worse matches to play than at Wembley against England. I think we can make it and be successful." #EURO2020 pic.twitter.com/sAtLumkqCT

Looking ahead towards the face-off with Germany, Henderson said that he knows what England need to do.

“It’s especially important to keep the ball, especially against Germany. They’re a fantastic team who have very good, technical players who can dominate games with the ball so you need to be really solid without the ball… They are top-class players all over the pitch… We’ll know them and we’ll watch their games in the Euros as well.”

000000
Popular comments
Yeah kick the befuddled brits out of the tournament and germany will be in the final since the side germany is on is far far easier than the other side!
mandrake
25 June, 12:21 GMT1
000000
◄ WORK AT HOME ► Want To Work From Home Without Selling Anything? No Experience Needed, Weekly Payments... Join The Exclusive Group Of People That Cracked The Code Of Financial Freedom! Learn More details Copy Here ........𝐖𝐰𝐰.Usd.Works68.𝐂𝐨𝐦
jajaro6155
25 June, 12:49 GMT1
000000
Newsfeed
0
New firstOld first
loader
LIVE
Заголовок открываемого материала
Access to the chat has been blocked for violating the rules . You will be able to participate again through:∞. If you do not agree with the blocking, please use the feedback form
The discussion is closed. You can participate in the discussion within 24 hours after the publication of the article.
To participate in the discussion
log in or register
loader
Chats
Заголовок открываемого материала
Worldwide
InternationalEnglishEnglishMundoEspañolSpanish
Europe
DeutschlandDeutschGermanFranceFrançaisFrenchΕλλάδαΕλληνικάGreekItaliaItalianoItalianČeská republikaČeštinaCzechPolskaPolskiPolishСрбиjаСрпскиSerbianLatvijaLatviešuLatvianLietuvaLietuviųLithuanianMoldovaMoldoveneascăMoldavianБеларусьБеларускiBelarusian
Transcaucasia
ԱրմենիաՀայերենArmenianАҧсныАҧсышәалаAbkhazХуссар ИрыстонИронауОssetianსაქართველოქართულიGeorgianAzərbaycanАzərbaycancaAzerbaijani
Middle East
Sputnik عربيArabicArabicTürkiyeTürkçeTurkishSputnik ایرانPersianPersianSputnik افغانستانDariDari
Central Asia
ҚазақстанҚазақ тіліKazakhКыргызстанКыргызчаKyrgyzOʻzbekistonЎзбекчаUzbekТоҷикистонТоҷикӣTajik
East & Southeast Asia
Việt NamTiếng ViệtVietnamese日本日本語Japanese俄罗斯卫星通讯社中文（简体）Chinese (simplified)俄罗斯卫星通讯社中文（繁体）Chinese (traditional)
South America
BrasilPortuguêsPortuguese
NewsfeedBreaking
07:18 GMTACLU Accused of 'Erasing Women' After it Edited Ruth Bader Ginsburg's Quote on Abortions
06:56 GMTGOP House Members File Impeachment Articles Against Biden Over 'Clear Violations of His Duties'
06:53 GMTUK's Claims About Third Russian Involved in Skripal Case 'Another Lie', Foreign Intel Chief Says
06:42 GMTFormer Islamist Preacher: 'There is a Salafist in Every Swedish Mosque'
06:33 GMTAlgeria Closes Airspace to All Planes From Morocco Over 'Provocations'
06:28 GMTRussia Ready to Cooperate With New German Gov't Based on Mutual Respect, Ambassador Says
05:29 GMTUS Sanctions Suffocating Syrian People, International Community Must Act, Foreign Minister Says
05:09 GMTLebanese Public Hopes New Gov't Will Tackle Economic Crisis, But What are the Odds It'll Succeed?
04:32 GMTIndian Scientists' Experiment May Solve Treatment Puzzles of Neurological Disorders Like Alzheimer's
04:31 GMTModi Arrives for Visit in Washington, Welcomed by Diaspora, Foreign Ministry Says
04:30 GMTDon't Do That! Shiba Inu Worried Its Cat Buddy May Get Hurt
04:15 GMTLive Updates: India Records 31,923 COVID-19 Cases Over Past 24 Hours
04:09 GMTPhoto: Armored Vehicles, National Guard Appear on Texas Border Amid Abbott's 'Steel Wall' Deployment
03:58 GMTBannon Admits He Spoke With Trump About 'Killing' Biden Presidency Ahead of Deadly Capitol Riot
03:00 GMTWreckage of Disappeared An-26 Plane Found in Russia's Khabarovsk Territory - Source
02:20 GMTLavrov Holds 1st Meeting With Truss in New York Amid New UK Accusations in Skripal Case
01:49 GMTDHS Looks to Staff Gitmo Migrant Facility With Guards Who Speak Haitian Creole Amid US Border Surge
01:30 GMTRussian Crew Leaves Boat Pilgrim in Alaska, Will Renew World Trip Next Spring - Captain
01:00 GMTWall Street Up Broadly as Fed Signals Caution With US Stimulus Taper, Rate Hike
00:45 GMT‘This Moment Demands Action’: Biden Eyes Executive Actions After Fruitless Police Reform Talks